The last planned infantry unit to rally to Typoo Bhyka's cause are the regiment of European volunteers/mercenaries, styled the Voluntaires de Bykli after their patron and honorary colonel Alphonse de Bykli. They featured earlier in a sneak preview but now they are completed they deserve a fuller exposure ~

The figures are by Eureka Miniatures from their French range in their Wars of the French Revolution section of the catalogue. They are largely made up of a gift from Aly Morrison at the last Partizan to be held before all this coronavirus malarky took hold, in August 2019. I added four figures to make a Voltigeur company and a mounted Colonel from Perry Miniatures - from the set of French mounted colonels in their AWI range ~ 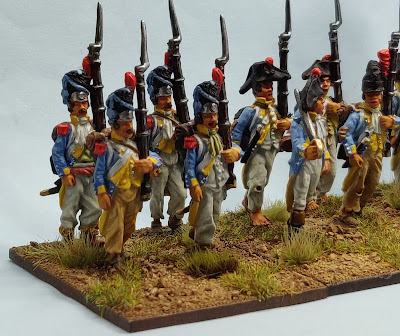 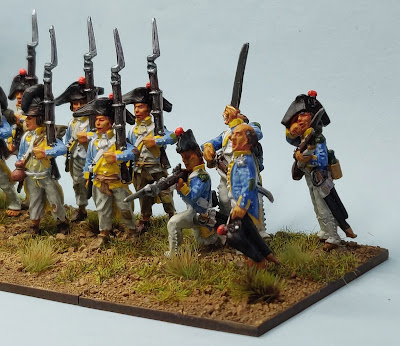 The regiment comprises four bases of Fusiliers, one of Grenadiers, and one of Voltigeurs. As an imagination regiment I felt the uniform of light blue with yellow facings looked suitably tropical in style and they carry a flag featuring the arms of the French Companie des Indes. In my mind they are largely recruited from French ner-do-wells and fortune hunters, officered by the younger sons of minor noble families making their way in the world.

Their completion brings me now to the last unit of Typoo's army, a unit of 9 Tribal Cavalry figures chosen from Perry Miniatures' Victoria's Little Wars range. I need a break from this project after this so the Highlanders for the Army of the Pendawar Presidency will wait until later in the year, along with the Hindoostan Regiment whose figures arrived on Wednesday in the post from Perry Miniatures!