...Vicomte de Flagge-Hutte, in the employ of Typoo Bhyka as the commander of his cavalry ~ 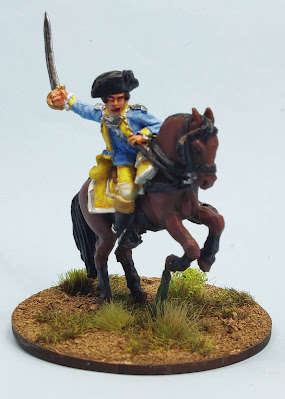 The figure is a Perry Miniatures French mounted Colonel from the AWI range of French figures.  He's a one piece casting and as it's such an active pose I thought him a natural for a cavalry commander. The uniform is entirely conjectural, based on the light blue with yellow facings that I decided on for Typoo's European troops. As he's from the nobility I gave him a pair of yellow trousers too! 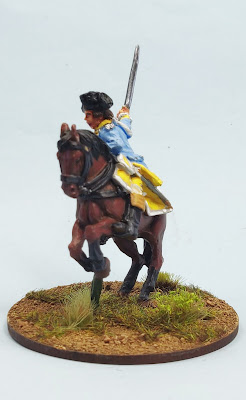 Now that he's finished I can get on with highlighting the five crew figures for the #2 gun, the Bhyklawar Horse Artillery to finish the battery. I've also started the first 4 Voluntaires de Bykli to sort out the look of the unit. The detail on these Eureka figures is much sharper to my eye than either recent Foundry or Perry Miniatures figures I've completed, which I hope will compensate for my ongoing hand and eye issues. We shall see I expect.