I mentioned yesterday that I was still working on figures for the Command stand for the Austrian Army. Well, unexpectedly I have finished it today and so I thought I would put it up for the odd interested passer by ~ 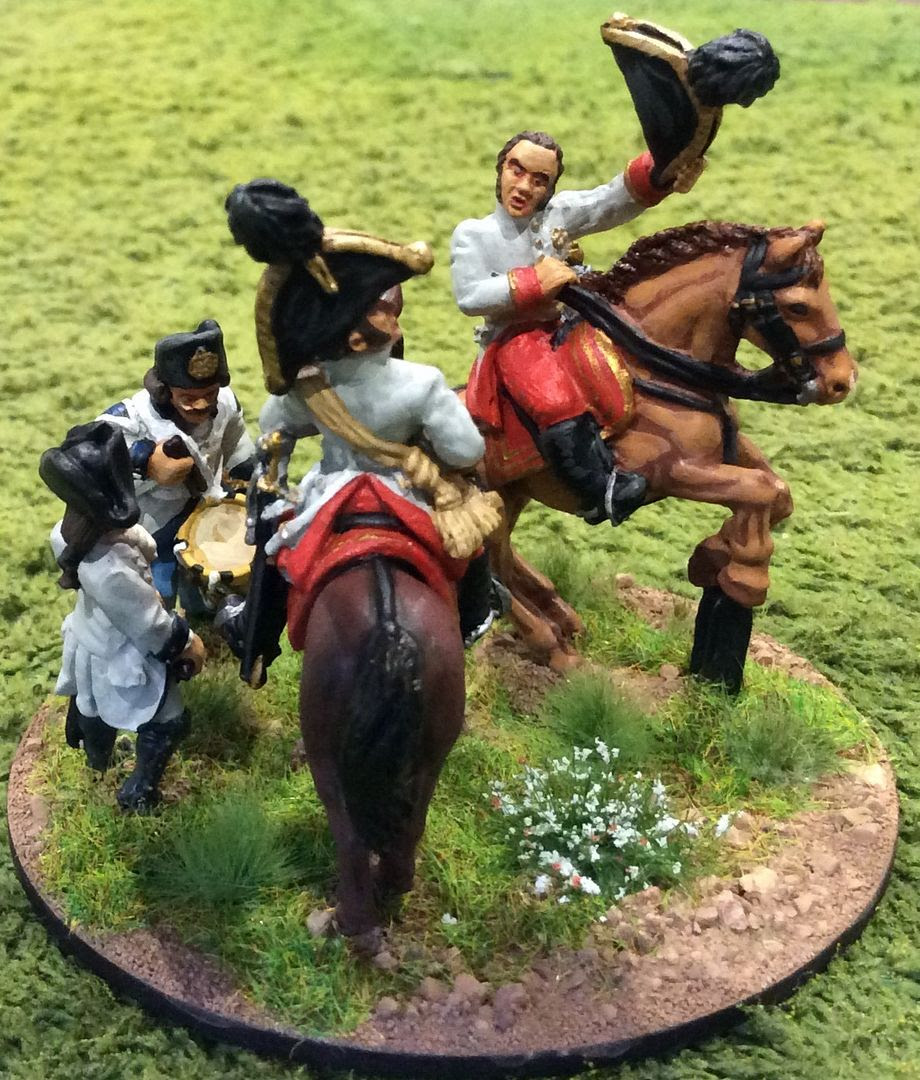 The mounted figures are by Front Rank, as Trent Miniatures don't have any Austrian generals yet in the range. The two figures on foot are from Trent and are an Austrian German officer and a Hungarian drummer. I don't think the drummers are on general release yet.{When I got my order at Partizan last September they were included by Duncan, along with a fifer and some Grenadier standard bearers.) 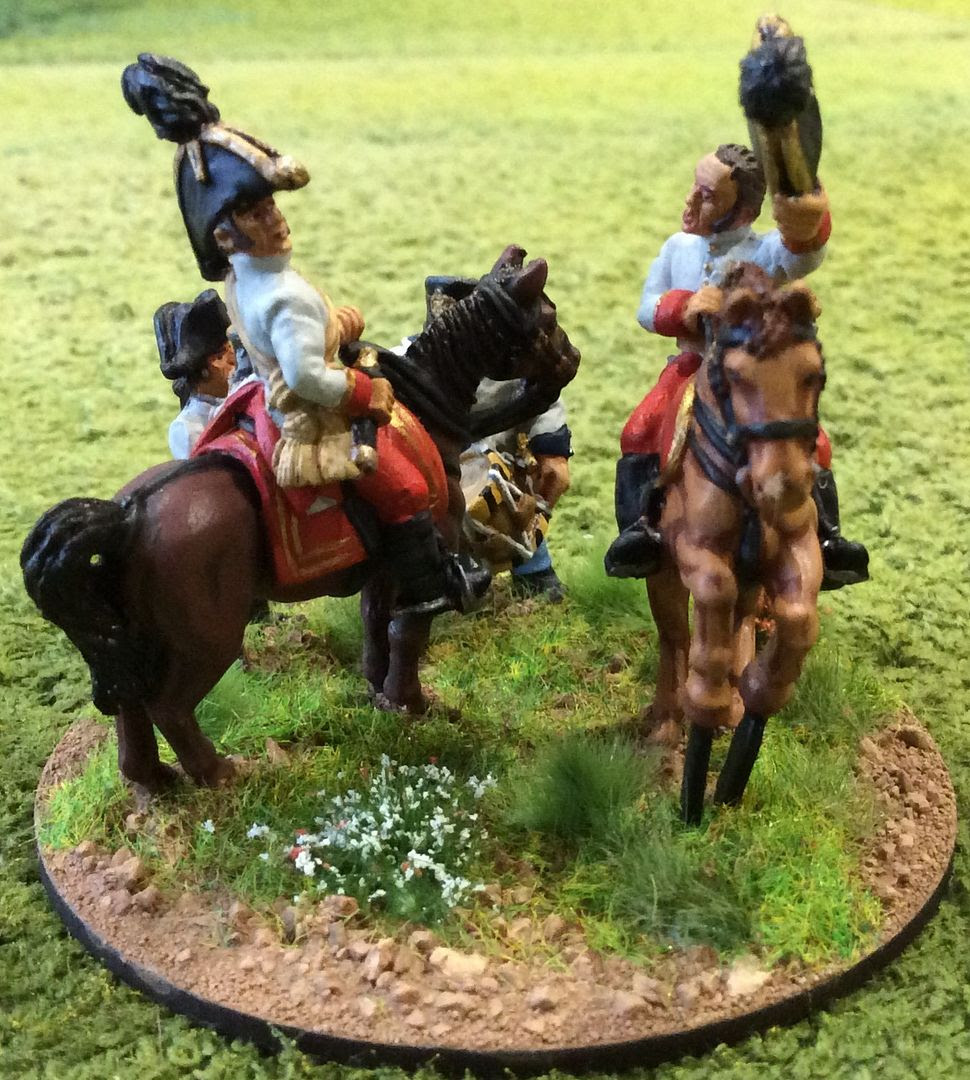 I'm far from happy with the red as it turned out. As I mentioned in a reply to Phil on the previous Blog post, red, white and black can be difficult colours. But, no more generals to do apart from a Cavalry Command base, so they will do for now. 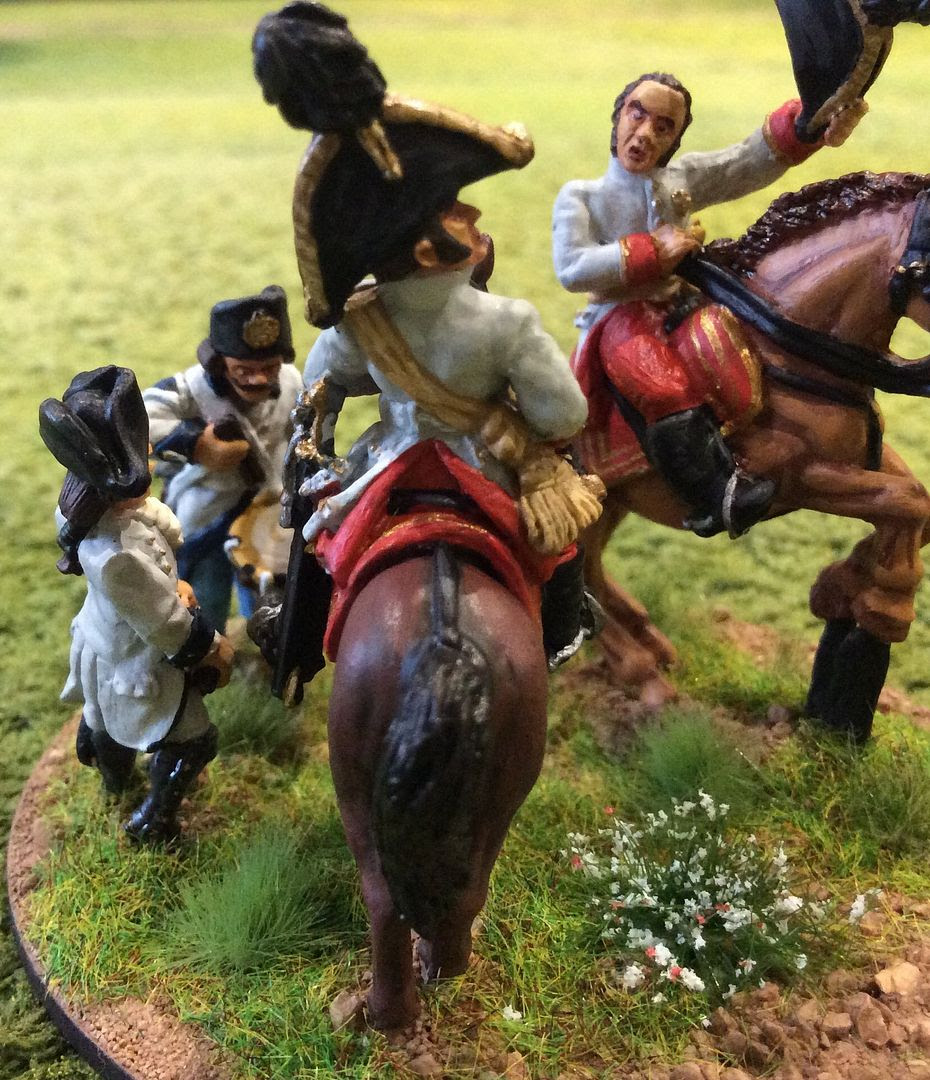 I think this close up gives a good idea of the Foundry 'Austrian White' triad, although I miss out the mid shade as the gradation is too gentle to my eye with the three being used. Matt has sent me an idea for using a different colour combination which he got from Dave Imrie, so I might use that on the next part of the project, a German Infantry battalion. Or then again, I might stick with what I know. I'll mull it over while I'm away.
In the never ending quest for other ranges to supplement the project I've looked at Elite, Old Glory, Eureka and now Foundry. The latter have some nicely posed early Austrian infantry ~ German and Hungarian, line fusiliers and grenadiers too! I may get some of these later in the year, as I'm confident they'll be a good match for the Trent look, but I also want some Curassiers and it seems only Eureka do these. Now at £4.10 each on the Fighting 15s website they look dear, but that's only 10p more than I'd pay for a Foundry cavalryman (£12 in a pack of three} so I may order some in the summer too. On the other hand, if I happen on a stockist in New Zealand I might bring them home with me! Well, you never know... Toodle Pip for a while!
Posted by David at 10:49 11 comments:

The First of the Austrians

The muse has remained strong this week and the eye has been behaving itself too. As a result I've started on the Austrians for my Wars of the French Revolution project. As with the French, the majority of the figures are from Trent Miniatures, with occasional pieces from Front Rank ~ guns and generals in the main so far. A battery of 12lb guns first up ~ 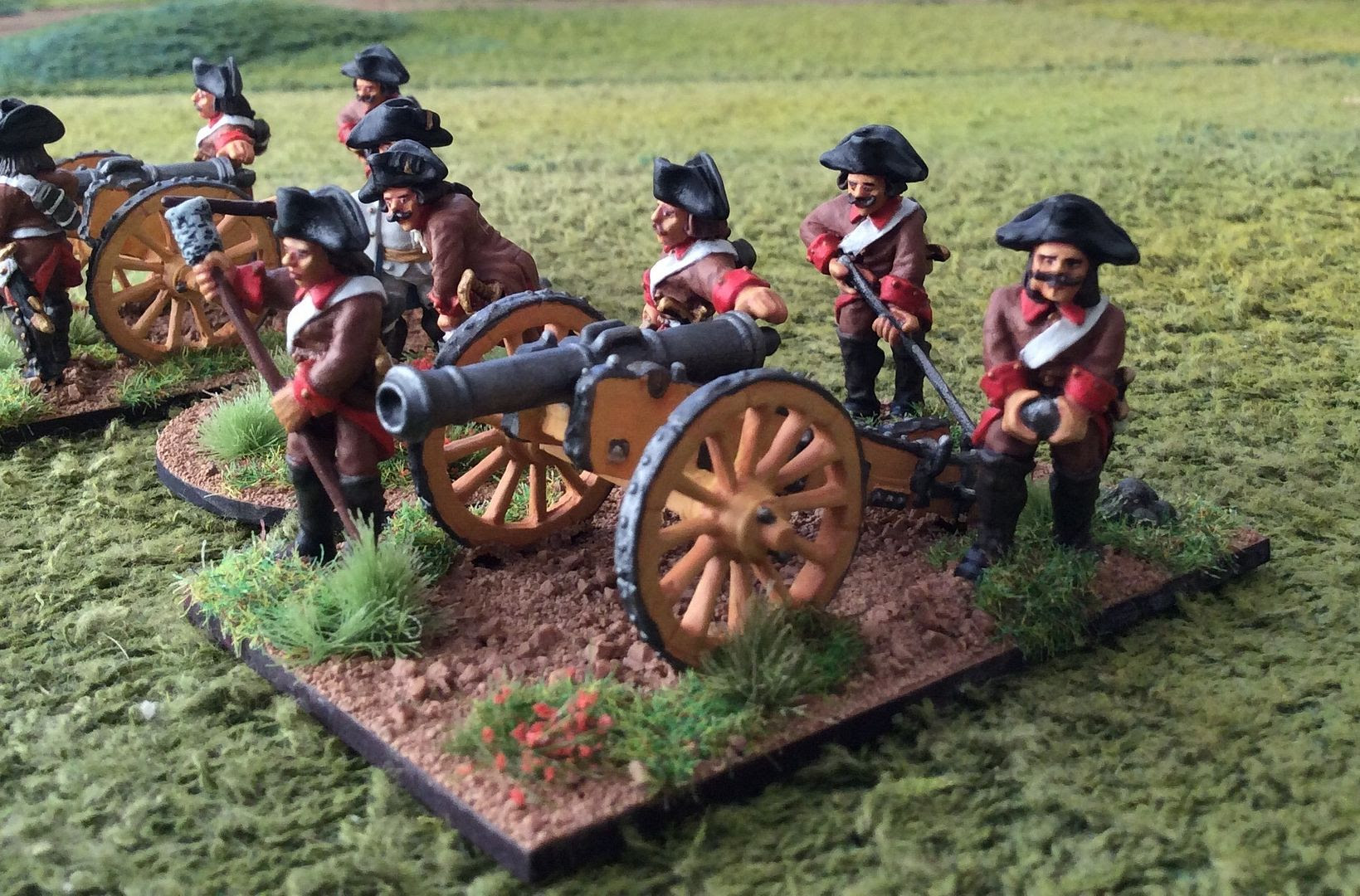 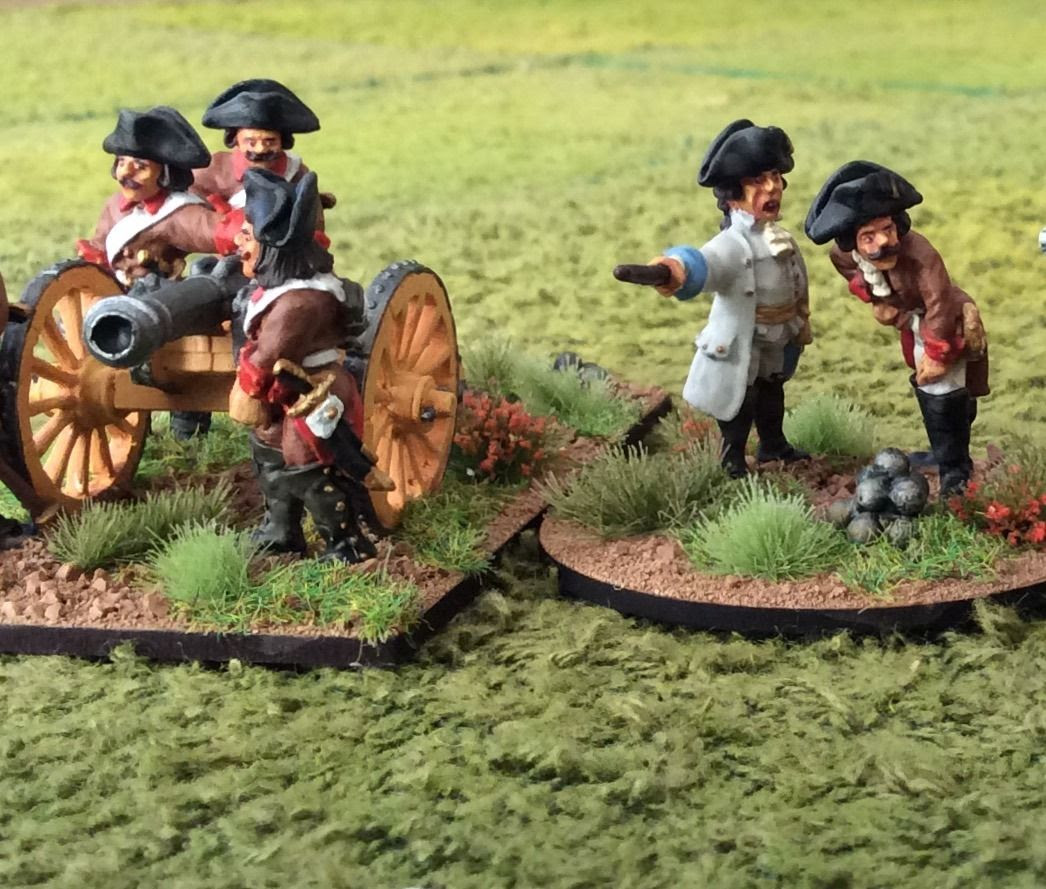 The infantry I have organised into 7 bases of 4 figures, giving a strength of 28 figures to represent a battalion. So far I've purchased two Fusilier battalions and one Grenadier battalion, in the latter case just 20 figures on 5 bases of 4 figures. All the figures are for German types. If all goes well, I shall buy the same total of Hungarian types in the Autumn. For test figures I painted a command stand for the infantry Brigade. It features a mounted officer, from Front Rank, together with a foot officer,a drummer, and two Fusiliers from Trent Miniatures. 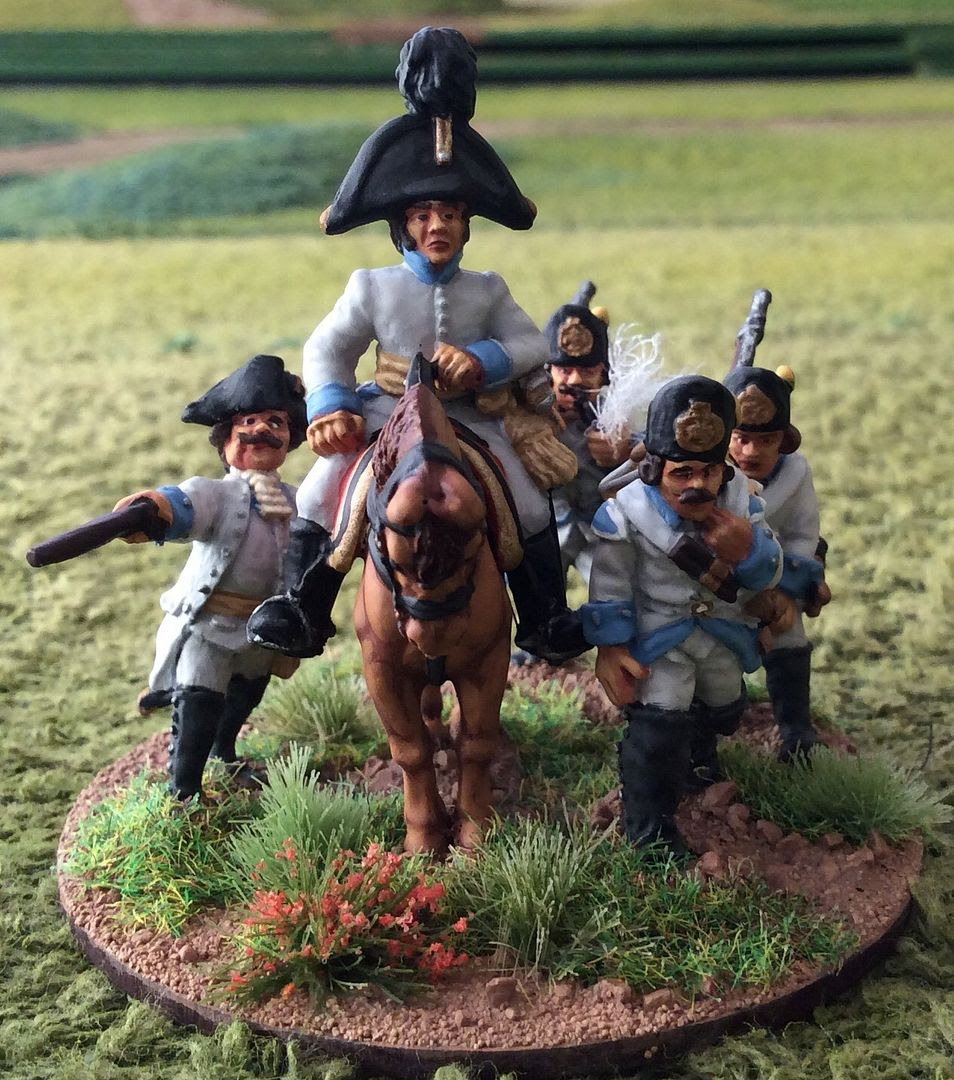 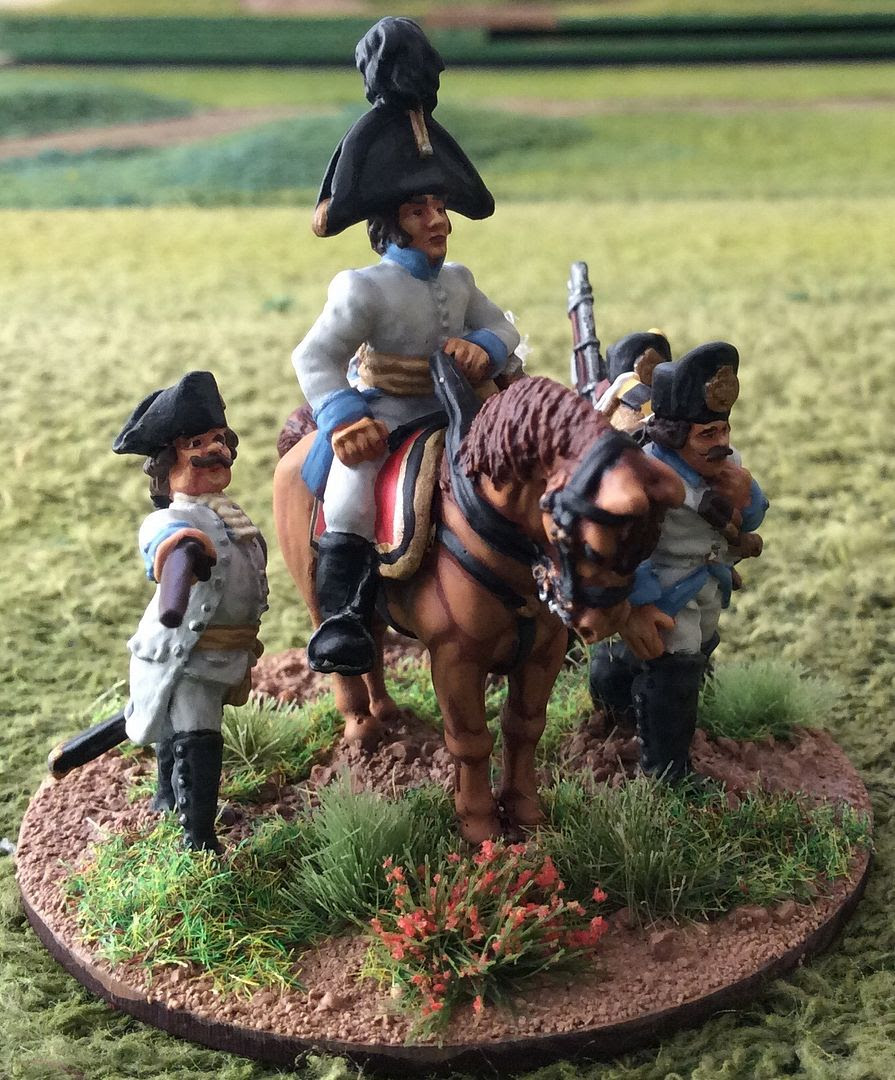 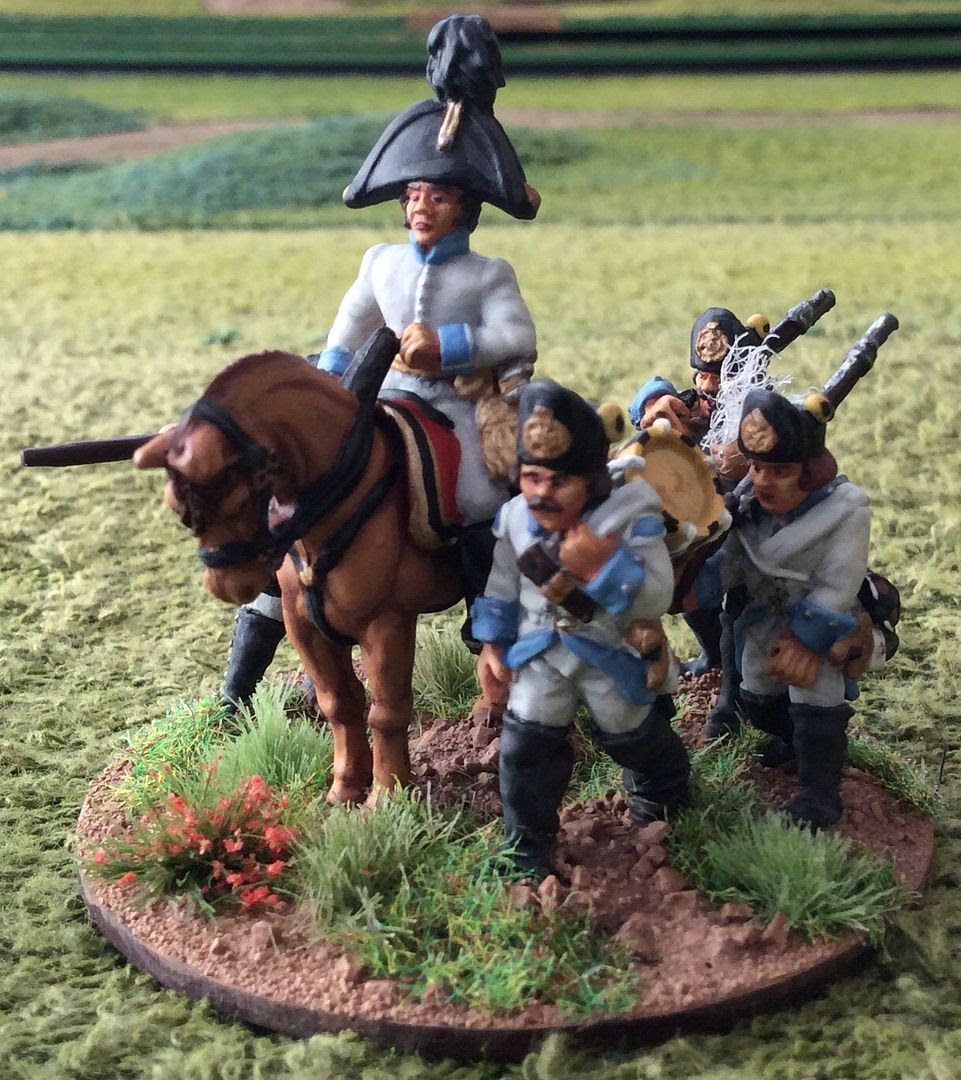 A little detail from the group: as one of the Fusiliers is depicted smoking his pipe I added a little kapok to suggest tobacco smoke. I'm not entirely sure that its not too much, but it was very fiddly even with that amount, I think less might have been too difficult for my skills. I like it anyway, so I hope others might too ~ 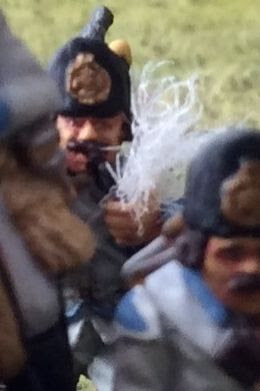 I have several more figures already started, but nothing near enough finished to be able to post before we leave for our holiday next week. Back to packing now then....
Posted by David at 06:48 4 comments:

All over the place!

The muse for painting has continued (thankfully) to be strong and I have completed another regiment for my Wars of the French Revolution project, the Lowenstein(esque)'s Chasseurs. I've previously featured the four skirmish figures I completed last week, but here is the full line effect ~

I based The figures two to a 40 x 40mm MDF base to signify a looser formation than the British regiments. Now, 'purists, lace freaks and button counters' will be furious, as the figures have not quite the right uniform for Lowenstein's Chasseurs, but I felt they were close enough for me! They will do, as Phil is wont to say, to represent one of the many foreign units in British pay during the period and make a nice change for painting! Judge for yourself anyway ~ 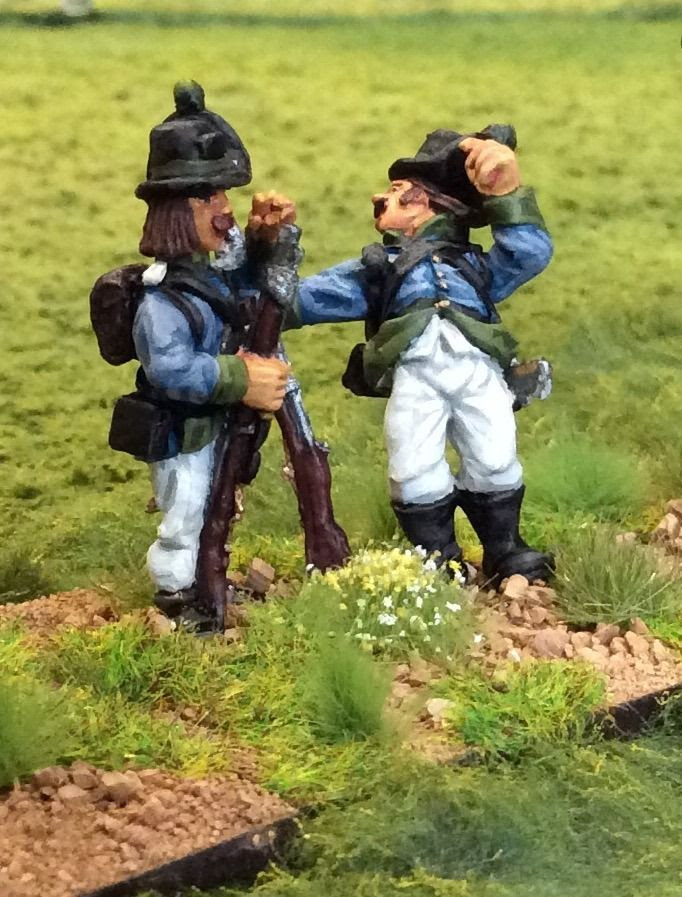 At present I'm working on a battery of Austrian 12lb guns and crew: the guns from Front Rank and the gunners and officers from Trent Miniatures. I hope to finish them this week, given a following wind in GHQ!
On a completely unrelated tack now: Phil came over yesterday for a game. We had decided on another ACW bash, using Bull Run to Gettysburg of course as the rules! The game was based on an outnumbered Confederate force defending a pass from a Union attack. The Union commander {Phil} had eight turns to force the pass, otherwise a Confederate victory would be declared. The game lasted the full eight turns, with a break for lunch, and Phil's bold and direct attack carried the day, although I'm sure he would say that my dice throwing  luck had something to say about the result. Anyway, a few snaps from the Battle of Boland's Gap to finish off ~


Another glorious defeat then! Oh well, back to the painting desk go I! There may be another game here in GHQ though before my hols, I'm waiting for Jon to confirm or cancel, but I'm off to paint Austrian gunners in the meantime!

At least for the time being, my French Republican army for my Wars of the French Revolution project is finished! I have two Hussars to collect from Duncan/Trent Miniatures at Partizan in May and I shall have completed that part of the project! I popped in to Arcane while I was in Nottingham last month to browse their stock of Trent Miniatures. The reason? Well, I wanted to add some appropriate skirmishes to my small British Army and, inspired by something I saw on another Blog,I wanted to look at the Tyrolean troops as I thought I could use them to suggest a foreign unit in British pay, perhaps like the Lowenstein Chasseurs. I bought three packs: Officers, Firing Line and Skirmishers/Casualties. While they lack some details of the Lowenstein's uniform jacket, they will do for me. I've completed four Skirmishers for the unit, so you can judge for yourself. Meanwhile, a few shots of the final French infantry battalion ~
﻿

The Elite Company in the above picture is a bit of a cheat, comprising as it does an officer and a drummer from the Consular Guard command pack and two Elite Company in bearskins. I wanted to be able to field the Elite Companies in one large composite Battalion and these will help the 'look' of that unit with a command element.

The picture above shows four skirmishing Elite Company figures for my Lowenstein-like Chasseurs. No doubt purists, lace counters and button freaks will have a fit, but they will do for me to represent one of the many foreign units in British pay during the period. I've just finished four more figures as it happens and have decided to base those two to a 40 x 40mm base to represent a looser formation than the British Line! 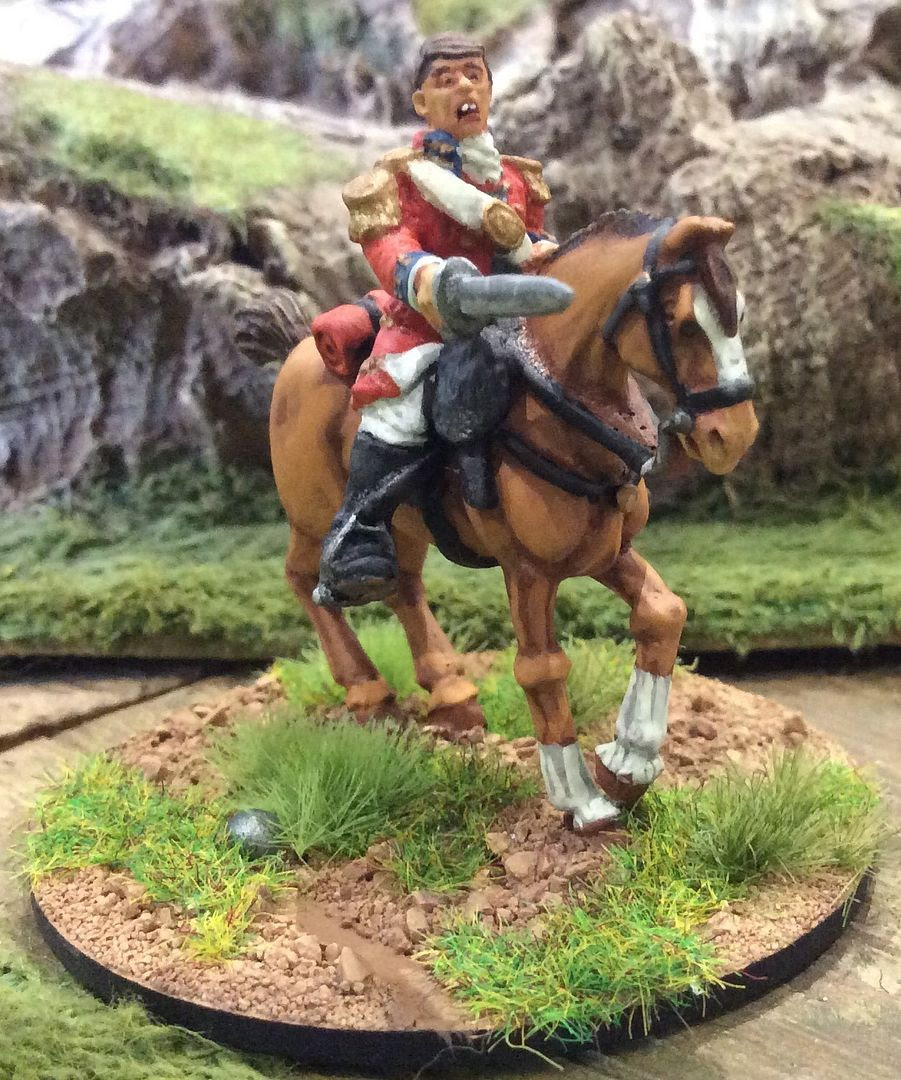 Finally, a figure to command the British Heavy Cavalry brigade. Its the Trent Miniatures Irish Militia officer with an Empress Miniatures head swop! I can't abide the loose heads which accompany the later figures from a different sculptor and I like the lively expression on this head so here he is. In my opinion is an average sculpt, a bit wooden, but reprieved by the fine Copplestone horse and the head swop. Of course, you are free to disagree!
I hope to finish the Chasseurs for the British in the next week, so if I can I'll pop them up before I go away. If not, they will have to wait, and so will my reader!

The Battle of Privy Farm

Earlier this week Jon came over to GHQ for our re-established regular game. As it was my turn to choose I decide to break out the ACW collection and give its first airing of the year. I took command of the Union army and Jon took the Rebs! The calm before the storm ~ 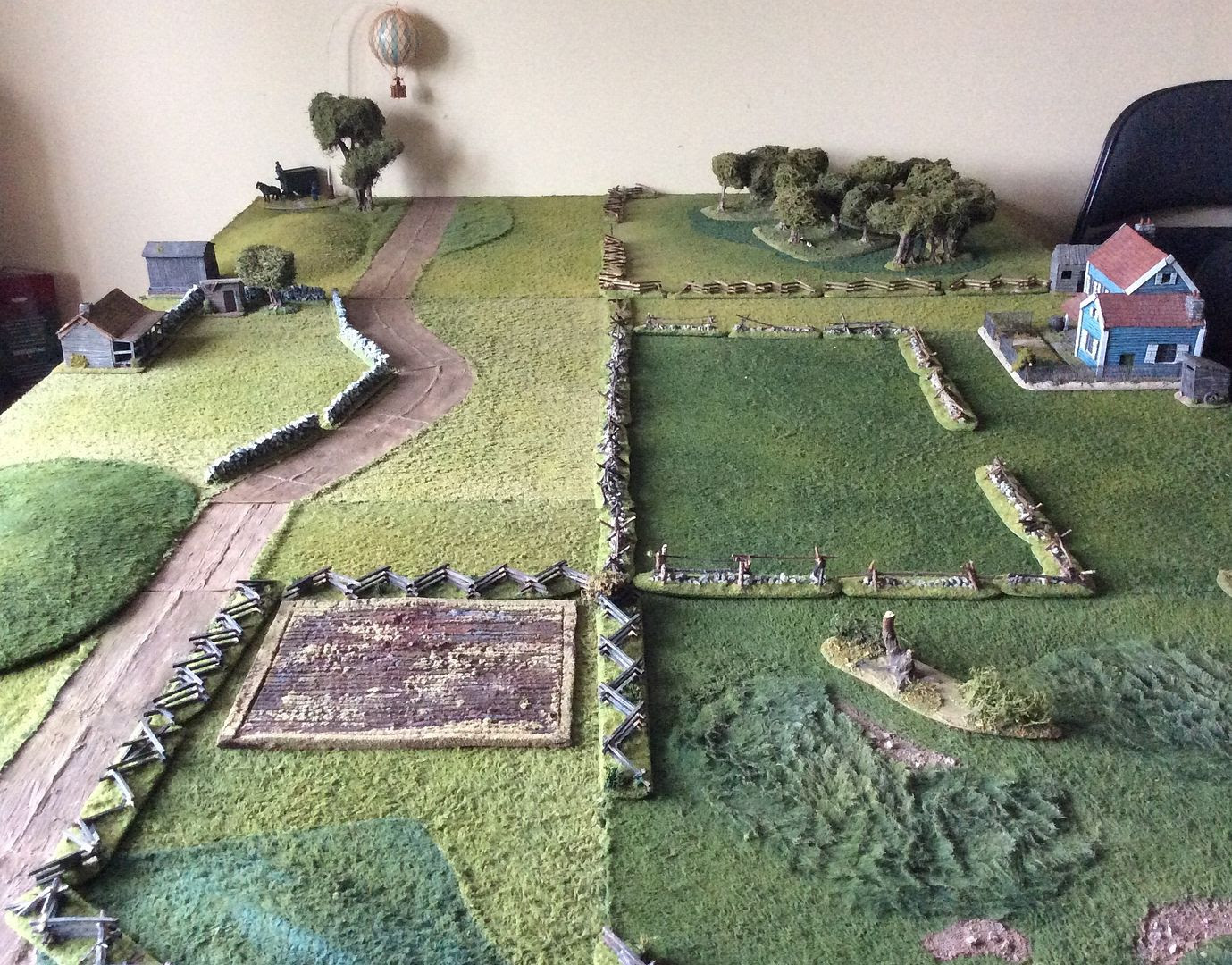 Before you ask: the balloon played no part in the game; it just happened to be in the same scenery box as the buildings! The general shape of the unfolding battle can be followed through the following pictures and the relevant captions. As ever all the figures are from my collection and the scenery is largely a mixture from The Last Valley and scratch built. As you'll probably know my figures are almost all by Dixon Miniatures and unsurprisingly the rules were my own Bull Run to Gettysburg. The game lasted 9 of the scheduled 10 turns and was over in 2 1/2 hours.