Continuing with the plan to integrate the painting of figures for command stands with painting units for the two respective armies I have followed up from completing the first unit of tribal horsemen for the army of Typoo Bhyka by painting the figures for Typoo himself and his entourage which will comprise the command base for the whole Army of Pendawar in future games. Three figures are from Wargames Foundry's Sikh Wars range; Typoo himself, the bearer of the Great Tyger Banner and the hornist. The fourth figure is a French colonel from Perry Miniatures' AWI range. He represents Typoo's military advisor, Alphonse de Bykli, fifth son of the Comte du Merde, and the runt of that litter of military incompetents! His uniform is entirely fictional, as will be that of his European battalion, the Voluntaires de Bykli. 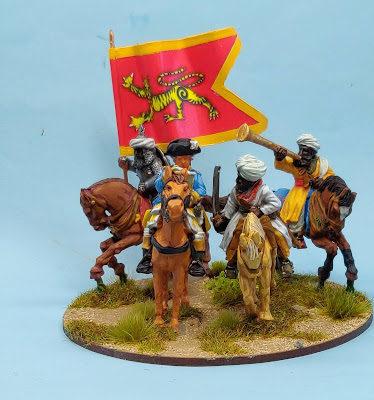 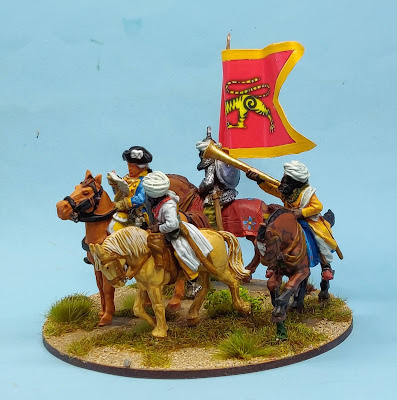 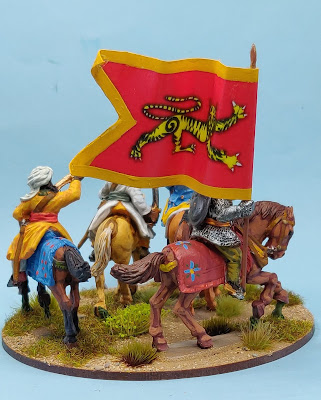 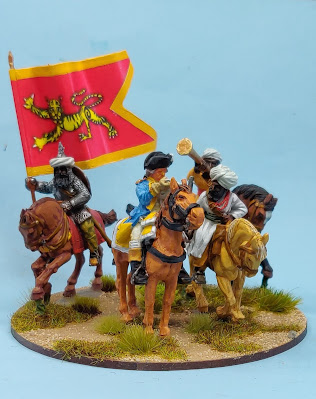 On Tuesday this week I took delivery of two parcels, both delivered the day after I had ordered them. As Hobbycraft are seemingly ever more incompetent with stocks of paint and varnish, I ordered three spray cans of Matt varnish from top slots n' trains. Excellent service, recommended! The second packet was from Arcane in Nottingham, Trent Miniatures British Light Dragoons in tropical service helmet. Again, highly recommend for prompt service. If only Perry Miniatures and Wargames Foundry's service was as efficient!

Next across the painting desk here in GHQ should be a second cavalry regiment for Typoo's army, but this time a regular unit. Much as I detest painting horses, especially those sculpted by the Perrys, I've dropped into a sort of rhythm, or perhaps a stupor rather, and am resigned to working through them before turning again to the E.I.C. in the shape of the 1st Brigade of infantry.

I have completed the first unit of irregular tribal cavalry for the army of Typoo Bhyka, the Tygre of Pendawar. The unit comprises three bases of three figures each. Unarmoured horsemen armed with the lance, a wicked talwaar, small dhals and a few with pistols make up the bulk of the unit. They are augmented by some officers wearing mail and helmets. The figures are from Wargames Foundry's Sikh Wars range, venerable figures certainly, but just right to fit into the project I thought. The MDF bases are, as ever, by Warbases while their standard was made by good chum George Anderson ~ 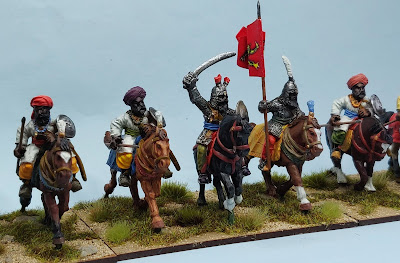 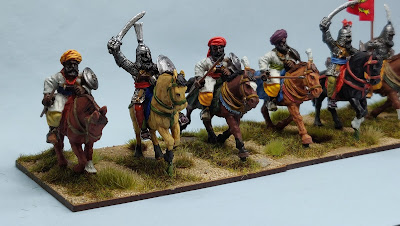 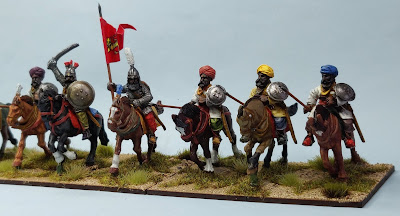 The next  to be underway here in GHQ will be Typoo Bhyka himself, together with his standard bearer and hornist, again Foundry figures from the Sikh Wars range. Alongside these three will be his renegade French advisor, Alphonse de Bykli, fifth son of the Comte du Merde, the runt of that litter of military incompetents! He is a Perry Miniatures mounted French colonel from their AWI range. I hope these will be finished over the coming May Bank Holiday weekend, we shall see.

A test base of three mounted native cavalry for the army of Typoo Bhyka, the Tygre of Pendawar. They are armed with the lance, but also sport a wicked looking long sword and a pistol. The figures are from the Wargames Foundry Sikh Wars range, so of an age in hobby terms. It's rather noticeable in both the stiff poses of the horses and riders, but also in the generally poor castings before they were cleaned up. Notwithstanding those issues though, they will fit in well with the rest of the army I think. Judge for yourselves anyway ~ 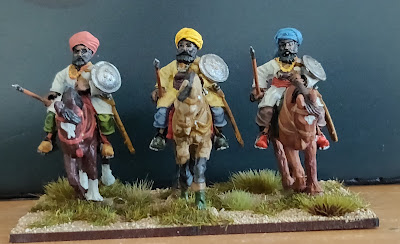 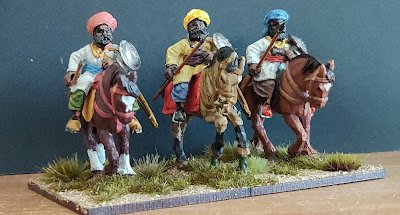 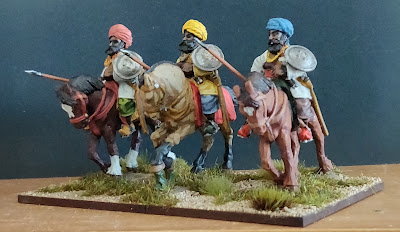 For a colour scheme I wanted a more flamboyant look than for the dour infantry, but still holding the look together with a white/off-white/ linen element, in this case the coats of the figures. I'm not confident it has worked to be honest, but I'll reserve judgement for now until I've completed all three bases and can get a better idea of the whole effect.

... for the E.I.C. Army of Pendawar has been completed as a break from the seemingly endless units for Typoo Bhyka's army. The stand features figures by Perry Miniatures, from the British in Egypt range. Besides the colonel on horseback there is a junior officer on foot and a spare Bombay Grenadier figure I had left over. The figures are loosely arranged to suggest an order being given by the colonel to the officer on foot - he's actually an Ensign from the Command Standing set. The Grenadier is just making up the number! 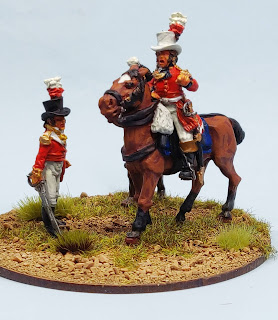 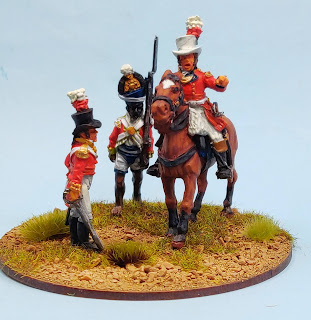 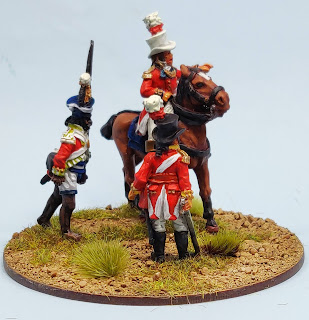 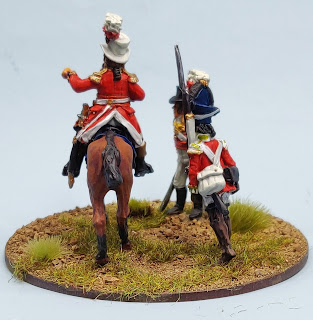 It's been a difficult period for my painting efforts hand wise of late, so progress has steadily dropped towards my target of two figures a day on average. Next up are likely to be some native cavalry for Typoo's army, as I've finally got around to spray undercoating a few! I'm still at the stage of thinking about colour combinations for these, though I'm pretty sure white will figure in part for the clothing! More as and when as they say...though given the drop off in comments by visitors it's hardly worth the effort posting really.

I've added a second building to the terrain collection for the future Tales from Pendawar games, coronavirus malarky permitting eventually of course. It's the second of the three buildings Jon so kindly gifted me earlier in the year. It's a venerable Hovels Middle Eastern house, but it will do fine to add to the scene, somewhere in Pendawar ~ 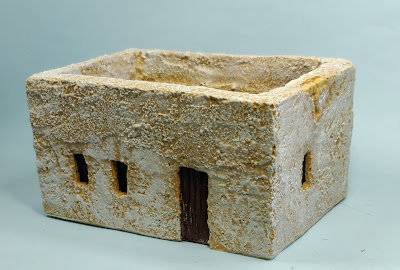 I've been working on a second E.I.C. command base of a mounted colonel, a junior office on foot, and a native infantry grenadier to lead the 1st Brigade of the Army of Pendawar. I'm well on with the three pieces, so should be able to finish them in due course, so do pop back for a look around later in the week. I suppose I'd better see to spray undercoating some of Typoo's cavalry too...oh well!

The third regiment of Regular infantry, the Tyger's Eye Regiment, completes my planned brigade of Regulars for the army of Typoo Bhyka, the Tyger look of Pendawar. Along with the infantry and cavalry of the Raja's Guard they should form the backbone of the army. The figures are from the Tribal Warriors packs from the Sikh Wars range at Wargames Foundry, sculpted back in the day by the Perrys. The figures are from the Matchlock armed men firing and standing packs, together with three figures from the Tribal Warriors Command pack. As ever the bases are from Warbases and the flag courtesy of chum George Anderson ~ 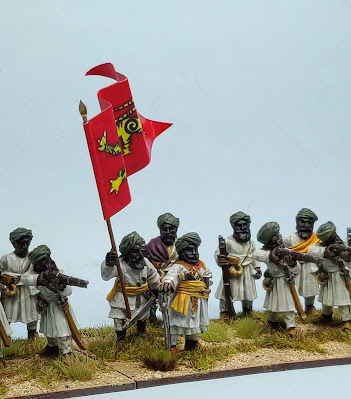 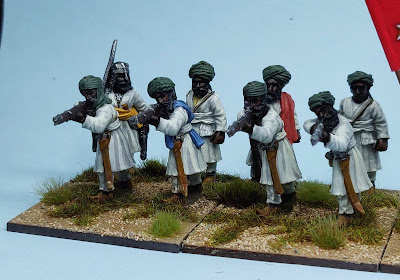 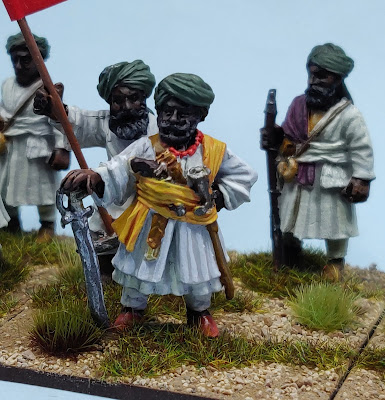 Next I plan to start adding the tribal cavalry elements to Typoo's army. I've bought from both Wargames Foundry and Perry Miniatures so far. For the former from the Sikh Wars range and for the latter from the Victoria's Little Wars range. That's a total of around 30 cavalry figures to tackle next then! They will be based in threes on 80x50mm bases to allow any combination of unit size from one base Tiny units upwards. With those figures identified from my Indian Mutiny collection this will give Typoo's army about 50 cavalry

Against this the Army of the Pendawar Presidency currently has no cavalry deployed, though I did buy 6 British Light Dragoons in my last Foundry order. I hope to add 12 Native Cavalry from AW Miniatures' range next month. I don't plan on more though beyond these. The strength of the E.I.C. Army of Pendawar will be it's brigades of infantry supported by artillery.

The second of the three planned regiments of regular infantry for Typoo Bhyka's army are the Tyger's Blood Regiment. All the figures are from Wargames Foundry, in the Tribal Warriors packs from the Sikh Wars range. As a contrast with the first regiment these are armed with talwaar and dhal. I chose one pack in advancing pose and one in charging pose just for a bit of variety. The command figures are three of the six from the Tribal Warriors Command pack. As is usual, the bases are from Warbases and measure 40x50mm ~ 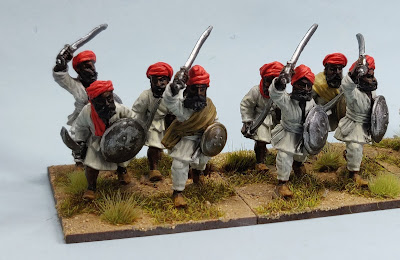 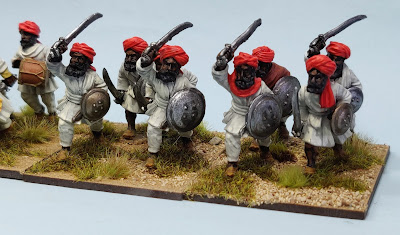 The third infantry regiment in the Brigade of regular infantry, the Tyger's Eye, are in a mix of firing and standing ready poses, again from the Tribal Warriors packs from the Wargames Foundry Sikh Wars range. At present that will conclude the infantry additions to the Army of Typoo Bhyka and I can move on to the cavalry additions. Horses! Dozens of them! Oh joy, oh rapture...not!

You may recall perhaps that as I was plodding through the first units for the E.I.C. Army of Pendawar I made a point of also working on figures for the command stands and the odd vignette. Keeping this in mind when I started on the Regular infantry brigade for Typoo Bhyka's army I have also been painting figures for the Brigade's command stand ~ 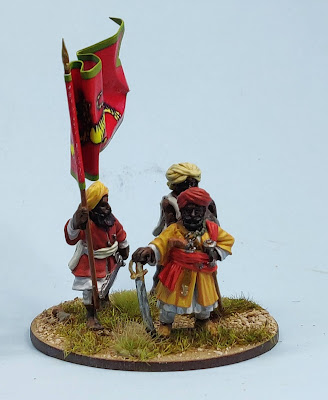 The commander and standard bearer are from the Foundry Miniatures Tribal Warriors Command pack while the water-wallah is from Perry Miniatures Sepoy Command pack. The flag was made for me by chum George Anderson utilizing a tiger design I found via a web search. I think it has worked out really well ~ 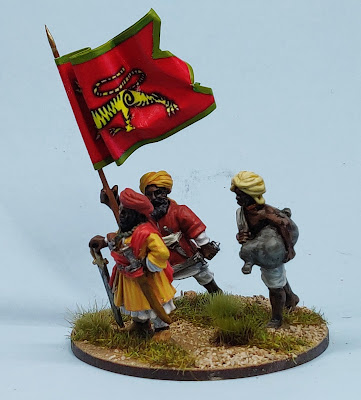 Next up are the second regiment of Regular infantry, the Tyger's Blood Regiment. These are all Foundry Miniatures armed with talwaar and dhal and sporting bright red turbans, as surely befits their regiment's name.

The first of three regular infantry regiments, the Tyger's Claw Regiment, ready to join the army of Typoo Bhyka. The figures are from Foundry Miniatures and the flag was made for me by chum George Anderson from a design I found on the web. The colour scheme is deliberately unfusy, mostly Foundry Boneyard light over Arctic Grey shade with turbans in Foundry Ochre. As ever, the MDF 40x50mm bases are from Warbases and the basing materials are from the remains of my Mutiny basing mixture. There may be enough for the other two Regular Regiments, but it will be close ~ 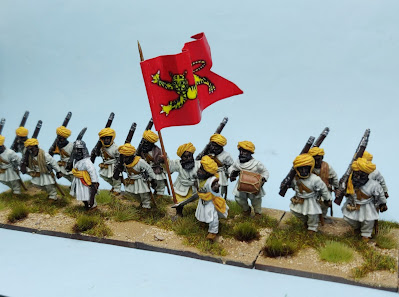 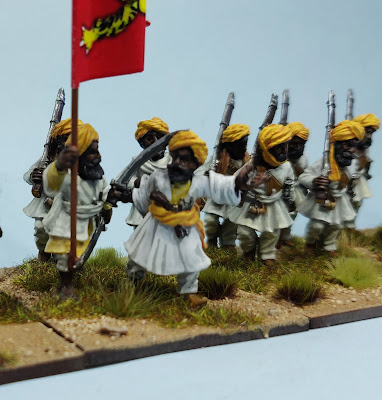 Next unit up will be the second regular infantry regiment, the Tyger's Blood Regiment, again by Foundry Miniatures but these armed with talwaar/sword and dhal/shield and sporting vibrant red turbans. In the meantime I'm also working on a three figure command base to lead the Regular Brigade in Typoo Bhyka's army.