Finally back in action here in GHQ, after a four week hiatus caused by a number of contributory factors, featuring an Ancient game between a Republican Roman army and a Celtiberian army, using our in house version of Neil Thomas' Ancient and Medieval Wargames rules. Phil and I have been discussing off and on how we might represent the Republican Roman army's style of warfare on the table top and I'd given it a good deal of thought, coming up with what I hoped would be a reasonable solution, more of which in due course. 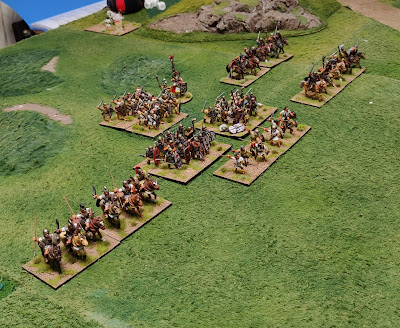 The Republican Romans under the eye of Coronus Cunctator himself, or Phil as he's more readily known. 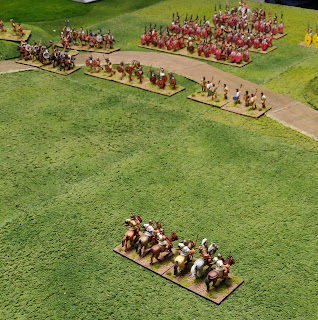 As the Romans advance steadily Forlornus sends his Spanish light cavalry out on the flank to see off the slingers and threaten the Roman left. 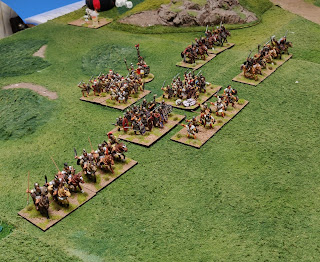 The rest of the Celtiberian army advances steadily to meet the Romans on the open plain. Big mistake perhaps?

Forlornus' eye view of the coming action. The Celtiberians are relying heavily on their three warbands and heavy cavalry to shatter the Romans.

The battle is joined as both sides' Skirmishers exchange volleys of javelins to little initial effect. 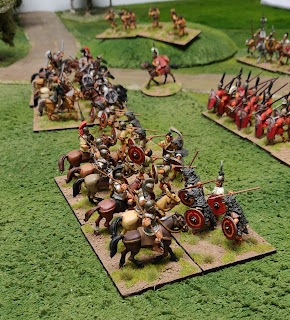 The Spanish Heavy Cavalry smash into the Roman Velites, who fail to evade in time, while more Celtiberian Heavies clash with their Roman counterparts on the left. 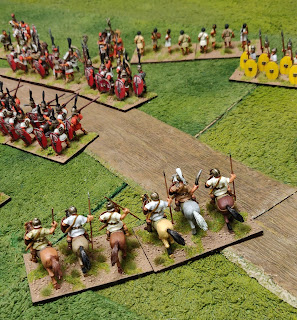 On the right the Spanish Light Cavalry drive off the slingers but fail to charge home on the Roman's exposed flank!

The Roman cavalry drive back the Celtiberians who have already lost one base in the melee while the Spanish Heavy Cavalry fail to destroy the Velites! 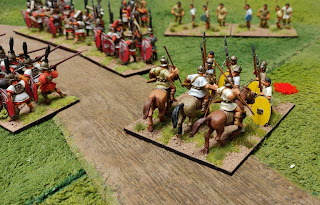 The Roman Levy who have rushed from their camp engage the Spanish Light Cavalry and soon get the upper hand!

The Celtiberians' Heavy Cavalry on their left are struggling to contain the Romans. New Dice Please!

The remnants of the Spanish Heavy Cavalry, having finally destroyed the Velites, crash into the Hastatii of the Legion's first line. The Celtiberian warbands are coming up fast to their support.

The Levy drive off the remnants of the Spanish Light Cavalry, securing the Romans' left flank and leaving the Legion to do it's bloody work in the centre.

The Levy, fresh from their victory, are assailed by Spanish skirmishers but are little troubled by it! 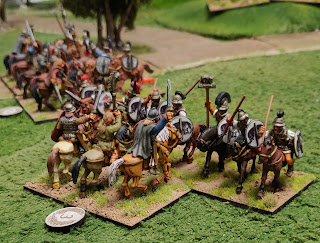 The cavalry action on the left is now intense, with all available elements engaged in the bloody struggling masses. 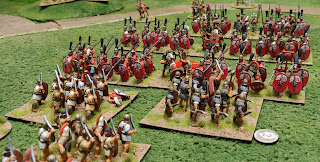 In the Centre the Hastatii have destroyed the Spanish Heavy Cavalry only to find the first of the warbands closing into the fight before they can gather their breath.

On the left the Romans have destroyed one Celtiberian Heavy Cavalry unit so Forlornus turns his final warband to meet the threat. 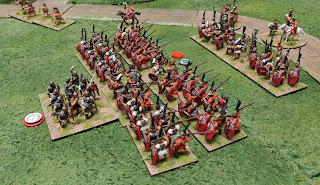 At this point in the game it's now appropriate to return to my efforts to depict the Roman style of refreshed combat by the Legion's elements. The Hastatii, having lost a base in combat, can take a Morale Test. If passed then they can retire behind the supporting Principes who then face the Warband in a fresh combat. To facilitate this action the Legion must always have at least one base depth open between the lines of each element. If the Principes choose later to also retire then that may be either behind the Hastatii or both may retire behind the Triarii. 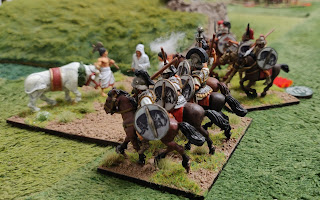 As it happens though, the Roman Heavy Cavalry sweep forward and capture the Celtiberian camp ending the game in a resounding win for Coronus!

I wanted a slightly blue-grey colour for the pants, so I opted for Foundry Union Trouser Blue mid washed with GW Nul Oil and lightly dry brushed with Foundry's Arctic Grey shade. This helps them stand out slightly on the table during a game from the mass of Union Infantry painted in my more usual choice of colours. Otherwise they are painted much like the rest of the collection when it comes to choice of colours, washes and such. The flags are by GMB Designs and the bases by Warbases, as ever ~ 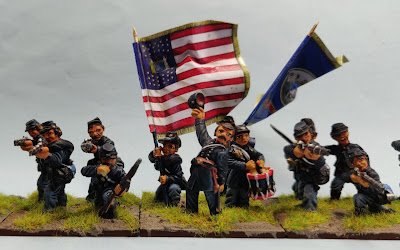 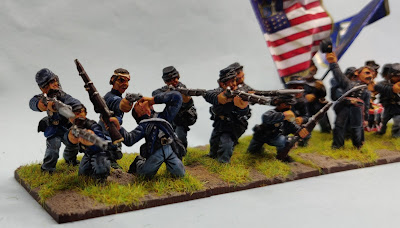 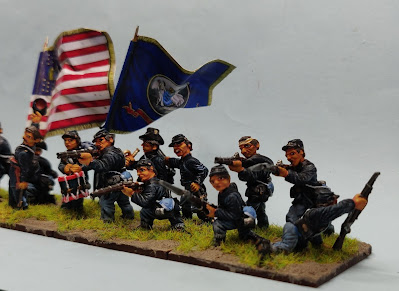 There are two regiments of Reb infantry left in the Lead Pimple now, though I have made a small order for half a dozen figures from Trevor to enable me to upgrade my Confederate deployed limbers as I did the Union ones. When they arrive I'll hopefully process those a tad more quickly than their Union counterparts! I can but hope...

ADC to the CinC, Army of the Pendawar Presidency

A single Perry Miniatures mounted officer in bicorne to serve as an ADC to the CinC, Army of the Pendawar Presidency ~ 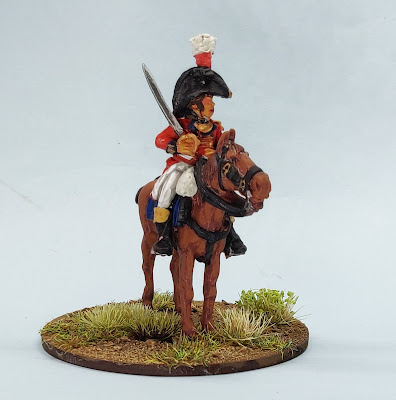 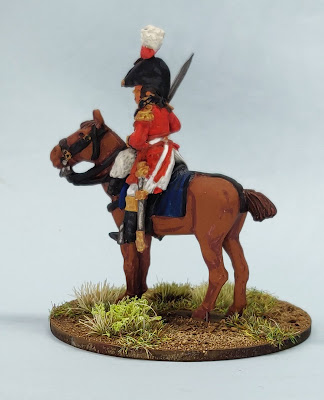 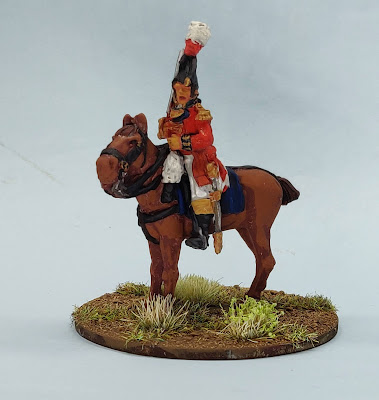 While I do prefer the officers in tropical issue topper, for this figure I wanted the officer in bicorne and with hair in a queue in order that he clearly stands out in a game! {Age and eyesight you see!} The other figures in the pack are destined for the role of regimental colonels as a variant of the figures in topper commanding the other European regiments lurking in the Lead Pimple which still await painting.

Meanwhile I'm well on with the painting of a unit of New Jersey Volunteer Infantry for my ACW Union army. Do I need more? Well, not really of course, but you must know how it is...

Enhancing the look of my deployed Union Artillery...

...after a rather long hiatus you might say! Back in the day, when the world was young, I bought and painted up several limbers to place behind deployed Artillery batteries in my ACW games. At the time I thought them splendid additions to the collection, but as is inevitably the case time moves ever on and things evolve and change. They were looking a bit tired and worn I thought.

So last year, just after the first lockdown eased, Spirit Games in Burton on Trent closed its brick hobby store and moved to solely mail order, holding a closing down sale with generous discounts on Dixon Miniatures ACW amongst others. I trolled over of course and amongst my purchases that day were a number of Union officers which I had plans for in new settings for the limbers. Of course they then languished in the Lead Pimple, as things do... But, no more, they are done and added to the limbers and accompanying figures and bits to make new additions to my deployed Union Artillery! I ought to think about their Confederate counterparts next I suppose... 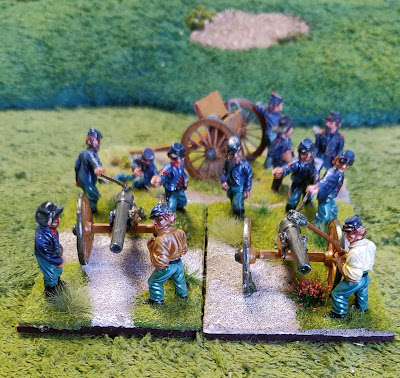 It was a tad damp yesterday, so Sue and I opted for a visit to the museum at Eden Camp, a WWII POW camp converted to a museum. At £15 a piece it may seem pricey to some I know, but you could easily spend several hours there. Sadly our visit coincided with a Visit by Primary School children, not my favourite species as a former High School teacher! They get under your feet I find! The museum tells the story of WWII, and its aftermath, from the Treaty of Versailles to Afghanistan. The displays are informative and interesting, though one or two as you'll see are decidedly odd we thought...

"Tomorrow Belongs to Me!" Thankfully not, but this is the odd first scene you encounter. Disturbing I thought.

Period assessment of the state of war readiness...

A universal carrier. The camouflage pattern is interesting. 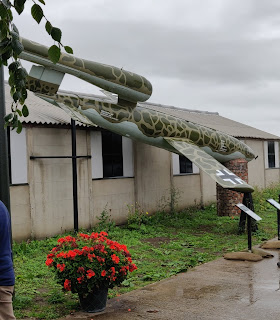 Controlling Fighter Command's response to Blitz attacks by the Luftwaffe.

Women's War work, both my mother and Sue's mother worked at Kynocks in Birmingham during the war. We wonder if they ever met...

The Prefab solution to the rehousing crisis after the war. In Stockland Green, Birmingham and in part of Wolverhampton a number have continued in use to today, though now they are brick clad and thoroughly modern inside. In their day those bombed out folk rehoused in them were very impressed usually.

Finally, and apologies in advance if the swastika offends, but a vignette display of Adolf in his cell working on Mein Kampf. {Matt tells me he dictated it to Hess though, so not accurate!}
A grand day out, thoroughly recommend if you are near Malton, North Yorkshire.

A few days R&R on the North Yorkshire coast near Filey. Went to explore Flamborough Head yesterday and amidst all the nature reserve information something on the AWI naval encounter off the Head ~ 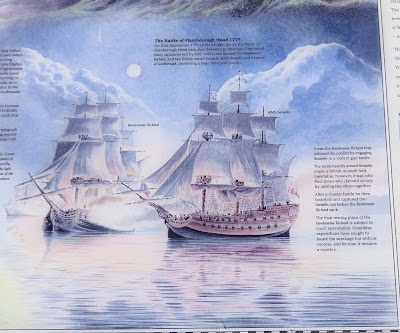 Coincidentally the day before I'd say in in Fish & Chip restaurant in Filey eating my Pensioner's Special under a naval map of the action off Scarborough during the early months of WWI.

For those of a more medieval lilt I've been to a Norman Manor at Burton Agnes Hall. It's clad in C17th brick but inside it boasts a Norman crypt and above the remains of the Norman living quarters, beneath a C15th timber roof.

Burton Agnes Hall was built in 1603 and boasts some fine original carvings in wood, plaster and marble. Well worth a visit if you are in the area. 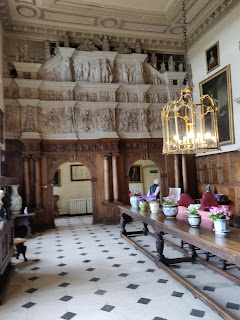 Plenty of inspiration in both for scratch builders and kit bashers I thought. I also popped to Mighty Lancer Games in Bridlington as I'm in the area. What did I buy? A large pot of GW Nul Oil. Last of the big spenders.....