History? It's All Around Us!

I have spent the morning in Hornsea 's museum of local history, located in several historic buildings right on the High Street ~

The buildings include an C18th farm house, on the left, and buildings related to Hornsea Pottery. As you'd expect there's a great deal about domestic and agricultural life, which my peasant genes connected with joyously ~ 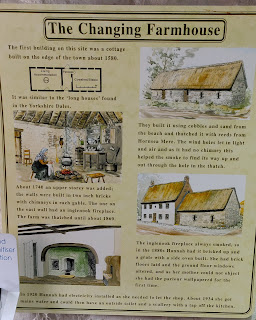 Above, the kitchen range. Below, the farm's Dairy. As both might have appeared in the C19th.

Of course, every community large or more modest in size, has its own connections with Britain's wars at home and overseas, with Hornsea being no exception to the rule. The museum has many exhibits dealing with the contribution the local population made to our country's war efforts in many conflicts. I'd like to share just a few with you if you don't mind ~ 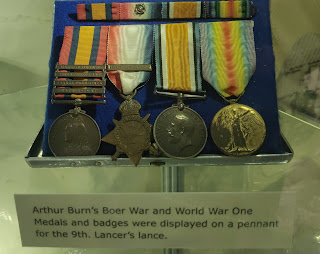 A direct link to the Burn family, tennants on the farm for over 300 years. 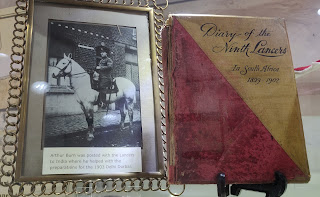 Serving in the 9th Lancers in the Boer War and in the Great War too.

Of course the Victorian period was the great age of the Volunteer Company. Several items in one display showcase the East Riding Yeomanry Artillery.

Cap badge and model of a member of the unit.

The typical Tommy went off to war in 1914 in this uniform. 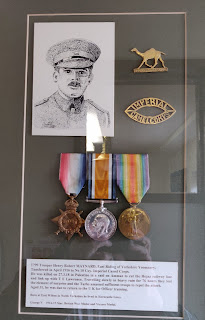 I have never seen the Imperial Camel Corps commemorated in any local history museum, so a first for me! 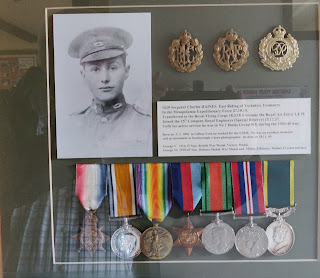 Service for many men and women spanned both the Great War and WWII of course. More than any previous conflict, WWII was a total war involving every citizen in the country's war effort. So, the Home Front beyond Dad's Army should be commemorated too ~ 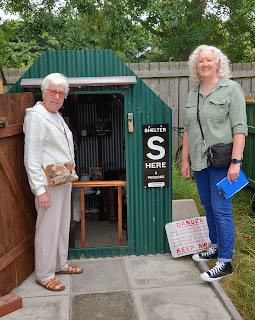 The air raid shelter saved many a life I'm sure...

...though the 'home comforts' might be a bit on the basic side. 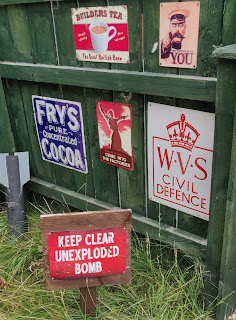 A few signs appropriate to my theme... 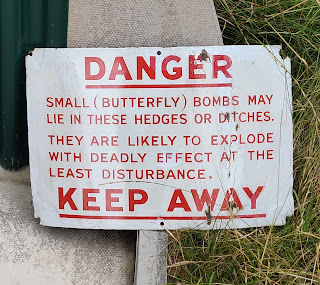 ...this one in particular emphasising the danger posed even after a raid.
One feature of Hornsea is it's mere, a large body of fresh water, the largest in Yorkshire. The mere played it's part in the Great War as a base for the Royal Naval Air Service and their fight against the German's U Boat menace ~ 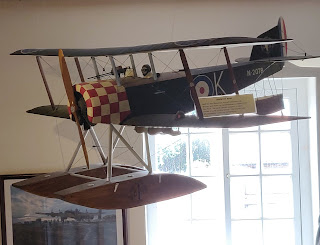 The RNAS's seaplane, the Sopwith Baby operated on anti submarine patrols from the mere.

Flying an early biplane was far from a comfortable experience...

...with pilots and observers needing ample protection from the cold at altitude. 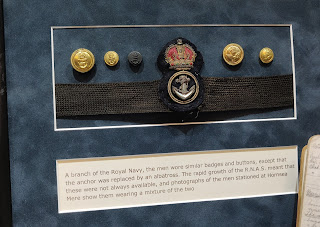 The RNAS had its own adapted buttons on its uniforms featuring not the anchor of the RN but the albatross! 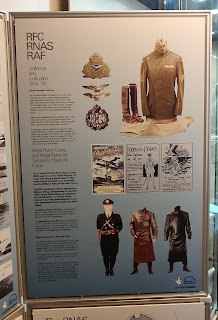 Late in the war the RNAS and the RFC were merged to form the newest arm of service, the RAF. 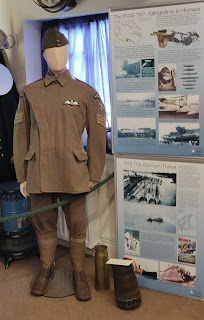 Uniform of a sergeant in the RFC. The army's khaki would give way to the RAF's blue-grey. 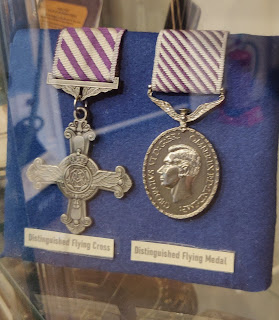 The new service would have its own distinctive gallantry awards too. Though like much else they would be tarnished by pointless class divisions!
Of course as wargamers we should never forget that, unlike our games, war has an all too human cost ~ 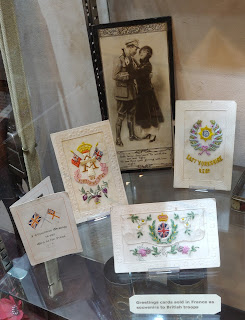 Separation from loved ones was a temporary trauma for many...

...but a permanent grief for all too many.
Our family has been spared that trauma gratefully but we can all take a moment to remember those who have not.

The Reality behind our games?

Memorials and standards of the 15th Yorkshire East Riding Regiment in Beverley Minster.

"A moth-eaten rag on a worm-eaten pole, It doesn't look likely to stir a man's soul; 'Tis the deeds that were done 'neath the moth-eaten rag When that pole was a staff and the rag was a Flag."

...on the first of my Stockbridge tribes figures for the French and Indian Wars expansion project. The figures are my first from Galloping Major and proved to be a joy to paint. As usual the bases are from Warbases and the texture and rocks from Woodlands Scenics range of Buff railway ballast (in three grades of Fine, Medium & Coarse). The colour scheme I'm using for these figures I found by an internet search throwing up other wargamers' painted versions, reenactor photos and art work. The main shirt colours will be Linen, Moss, Boneyard and Canvas which will be augmented by more colourful leggings than on my European figures, as I hope you can see from the pictures ~ 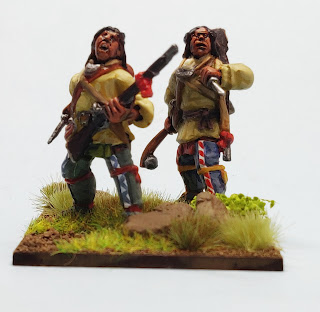 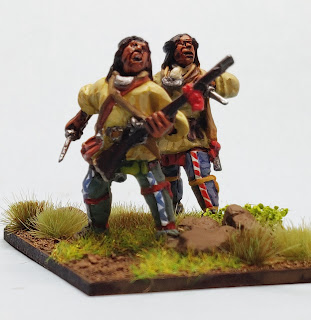 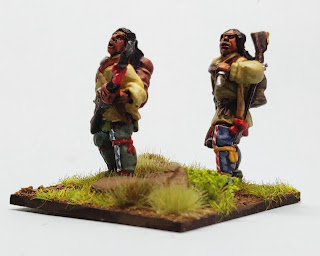 I am off for a short break again later in the week. First to Holmfirth in West Yorkshire to do The Last of the Summer Wine tour and then on to Hornsea on the East Yorkshire coast where we are renting a house for a week with Ruth and her family. This by way of an explanation as to the lack of activity on the blog in the coming two weeks. I hope that you will feel like popping back after the intermission to follow our hobby activity here in GHQ and beyond.

Thanks to my close encounter with Covid over the past several days I've not been able to reach my goal of finishing this unit while Phil was away, in fact for most of the time I was too poorly to even contemplate painting! But, health improves and things look more promising and so the brushes have been wielded once again, albeit in very truncated sessions at times. While one more base of three figures remains to be processed, here are the bases I've completed to date ~

To recap: the figures are from Redoubt Enterprises' F&IW range; the bases from Warbases; and the ground texture from the Woodlands Scenics range of railway ballast (in three grades) with the addition of rocks from the same range. All are washed over with Games Workshop's Steel Legion Drab, formerly known as Graveyard Earth, before the static grass and tufts are added. 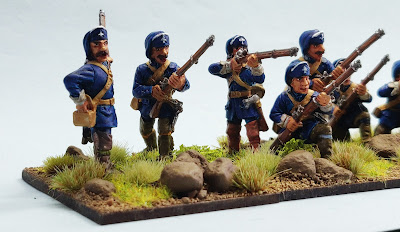 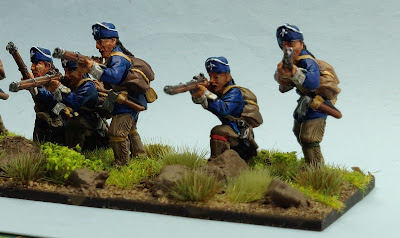 When these are finished I have some Galloping Major Miniatures next in the queue in the shape of several bases of First Nations warriors providing some Stockbridge tribes figures to ally with the British. When I complete these we will try a game I think to see how Black Powder 2 shapes up to giving us the sort of game outcomes we want. As they say, more as and when.

A Souvenir from Cornwall

There will be an interuption to activity here in GHQ, but hopefully of not too great a duration, as I've tested positive for COVID.

For those who have avoided it to date I can't say I'd recommend it! Pop back next week to catch up with developments here.

...for the next F&IW unit to teach the head of the painting queue, in the shape of the Compagnies Franches de la Marine 's command figure ~ 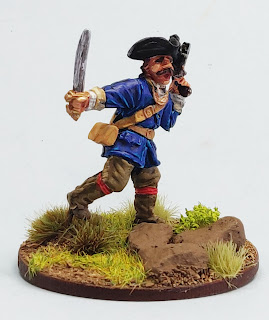 The figure was kindly added to my most recent Redoubt Enterprises order, a level of service I very much appreciated. I wanted just this figure from the alternate pack and Andy most kindly dropped it in with an order for others from the unit in the range. The casting was crisp and clean and needed just the hand and it's pistol glueing into place ~ 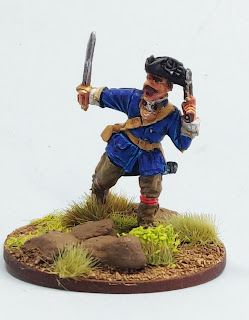 I've based the figure separately as I will be using him to command not only the Marine, but also the French-Canadian irregulars and First Nations allies in the force. He might represent the noted French officer of the period, Daniel Hyacinthe de Lienard de Beaujeu, though if you wanted a more exotic likeness you'd have to go to Galloping Major Miniatures for the figure in native dress. He will however do the job for me! In the meantime I shall be pressing on with the remaining figures for his unit, so more about them can be anticipated when they are done. At present the first base of five planned bases is completed bar the vegetation and the second base's three figures are well underway.

Sue and I have been away for a week's R&R in Cornwall. We've been staying in the small coastal village of Downderry in a rather fine appartment with a splendid view ~

We have generally been chillaxing locally mostly, but popping out and about if we felt like it. I don't know about other wargamers, but it seems to me that aspects of the hobby pop up even when you are not consciously looking for any. Treating ourselves to Coffee & Cake in Liskeard's Stuart House we found an exhibition of the Civil War's impact on the town and C17th life in general ~

Lots of interesting information panels around explaining both the exhibits and the course of the war in the area, especially focusing on Roundway Down and it's aftermath. 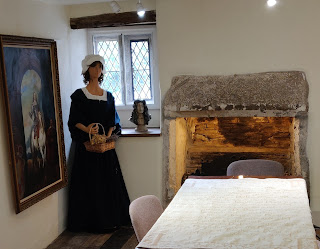 And all for free! The final three from the exhibition focusing on the likely events in the life of the woman of the house and childbirth. Progress is a good thing it leaves you thinking! We also took advantage of our National Trust membership to visit Anthony House, thankfully mostly avoiding the earnest but irritating intrusions of the 'volunteer' room guides, who I suspect are mostly retired infant school teachers! The house post dates the ECW but is linked to the Carew family, with members declaring for both sides it seems ~

The approach to the house, not landscaped by Capability Brown!

The Hall, dominated by its fireplace and portrait of Charles I. 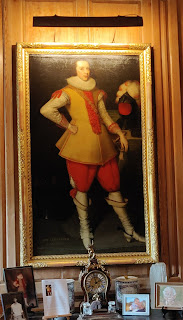 Sir John Carew(?) Who raised the Militia for Parliament. Royalist family members cut his picture out of the frame and consigned it to the cellars. When Parliament later executed him for treason the picture was roughly stitched back in the frame!

What appears to be a period silk standard of the family's regiment of Foot. If it is genuine then it's in mighty fine condition. It's behind a protective perspex screen so it's safe from grubby fingered wargamers!

We were able to call in at Restormel Castle, or what remains of it. It briefly saw action in the Civil War, the only time in its entire history it seems. 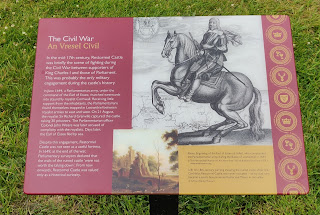 It seems it wasn't even worth slighting at the war's conclusion! Sad fate for any castle to be deemed useless!