As I've remarked on previous occasions, progress with painting has been glacial since I came home. However, I have finished a second ECW personality figure, this time for myself. I present to you, Obadiah Bykleigh, a stout Parliamentarian from Rushall, in the county of Staffordshire. The figure is from the set of three mounted commanders by Perry Miniatures. While I enjoy painting the figures, they are seeming to take an increasing time to clean up for undercoating and, I'm sorry to say, the finished quality of the castings is vague too often for my money.

Since the brothers can't fail to be aware of this problem, reported as it is on any number of Forum Boards, one can only assume that they don't think its important enough to address. Perhaps its an object lesson in sculptors with no higher authority to answer to? Perhaps they have their eyes firmly on those plastic monstrosities? Or waggons even? Perhaps I'm just feeling my age even?
I still have two further foot units to round off my project, which I hope to do by the end of November. Though I am tempted to add a few items from the new Empress offerings, perhaps at least a gun and crew as a token presence in my armies?

In the meantime, back to painting as and when I'm able. I have the Partizan free figure and two Mutton Chop 'Carry on...' characters on the go now, knee permitting. In a game-free month, the bits of painting I can do have proven very important for morale here in GHQ.

I managed to finish up the last three figures to complete Rupert's Blew Coats for my ECW Royalist army today. The first picture shows the pike block, three ranks of five figures, and the two sleeves
of shot, two ranks of four figures.

The second picture shows the whole unit, including the non combatant 'Command' stand and the 'Spent Base' marker.

The third picture shows the character figure for Phil in the Royalist army, Sir Marmaduke Robinson, later 1st Baron Rawnsley.
But, all this is trivia set besides today's wonderful news: Sue and I became Grandparents for the first time when Arthur Benjamin Howard Bickley arrived, Matt and Sarah's first child. To say I'm chuffed would be an understatement!
﻿

Its progress,Jim,but not as we know it.

I can finally sit at my desks to paint and work on the computer, though only in two or three 15 minute slots each day, or my knee begins to seize up! I had the staples removed from my wound on Friday, all 35 of them, in what could best be describes as an 'interesting experience'. Thankfully the wound is healing well: the District Nurse pronounced it a good wound! My next milestone is the start of Physiotherapy classes on Thursday. I've already been to the centre once and can safely say that the most apt description of Physio is that its what the Gestapo might have been like if they'd been English: "We are going to hurt you, I'm afraid; sorry!" Of course its all necessary, but still a bit sharp I have to say...
Back to wargaming them. First I'd like to thank all the folk who sent me their best wishes, many of whom I'd never met except on the net. It really does rally the spirits when you're low you know, so 'Thanks!', to all of you! In the meantime, some ECW Foote:' Rupert's Blew Coats', a unit I started before the operation and one I've subsequently been working on in short bursts over the last two weeks. All Perry Miniatures, based on MDF bases from Warbases.


The Command Stand. I finished this before I went into hospital. The flags are from GMB and the flowering tufts from Mutineer.


﻿The Pike block, three ranks deep, to remind me that its a unit with a ratio of pike to shotte of 1:1. The base still needs grassing and tufting before its varnished.


A completed sleeve of shotte, still need the base grassing and tufting before varnishing.

The second sleeve of shotte, still have to paint three more musket armed foote.
If I manage to complete the unit in the next day or two I've got a couple of Mounted Command figures which Jon gave me, so I'll be trying to do them too. Also in the queue are the Partizan free figure from last month and two Mutton Chop characters of 'Carry on...' fame! After that, for October, I've prepared an third ECW Foote Regiment: an unknown one I'll be painting in tawny coats as Lord Walton's Foote.
Well, the knee is well and truely stiff now, so this will have to do. Enjoy your gaming, you'll br managing more than me this month I expect...﻿
﻿
Posted by David at 10:33 3 comments: 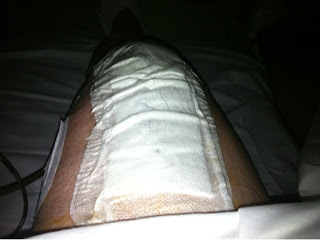 Not for the squeamish though! If anyone was thinking I'd soon be back painting and gaming, here's a picture showing my leg post op! Have to say its painful! But, Physio starts tomorrow, so KBO is the Order of the Day!
The pictures are with, and then without, the field dressing! I walked around the block after lunch, about half a mile, and came home so tired I've been asleep since! But, Tomorrow is Another Day... 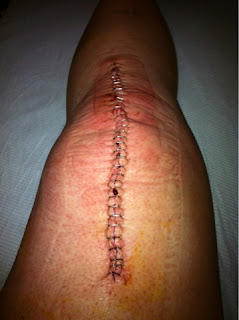 I've been steadily painting up the first of four (hopefully) new Perry ECW Foote units, in this case Sir John Gell's Regiment of Foote. They are based for my own rules, "A Crowning Mercy", which I expect will be out in early 2013.
The first picture shows them drawn up in Battle Order, with the firebrand Puritan Jeremiah Bykleigh (a Warlord interloper) invoking God's wrath on the enemy!!! The second shows one of the sleeves of shotte, with the officer prominent in the front rank. While the third photo shows the Command stand leading the Regiment forward.
I've started a second unit now and have completed the Command stand. They will be Rupert's Bluecoats for the Royalists! 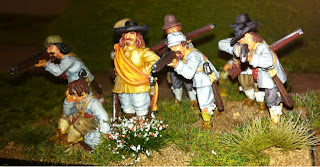 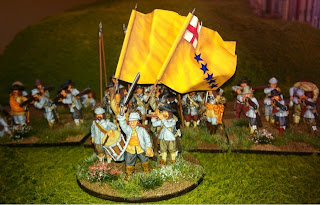 The photos were taken on my camera phone, so are not as sharp as I'd like, but needs must while my computer is away in intensive care (or perhaps the last chance saloon?) I'm having to blog from the phone and then edit from our old steampunk laptop, not enough power in it to put up the original post you see.﻿
﻿
Posted by David at 09:49 4 comments:

The Undertaker opens for business

The Hearse is an old GW model I think, with horses from Dixon & the man himself from Foundry.

The building features a mortuary annex on the one side and an external first floor staircase on the opposite side. It also has a removable upper floor and roof. As Frontline have just bought out some resin pieces it will soon be furnished like the other town buildings. 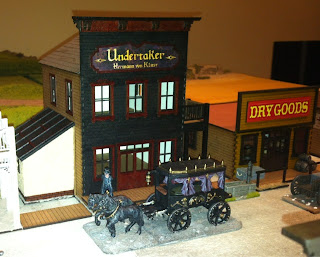 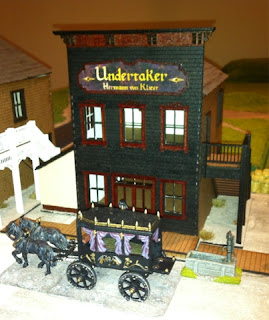