For this week's game here in GHQ Phil and I settled on an ECW bash. A locally superior Parliamentary force, led by Obadiah Bykleigh, must beat the Royalists of Sir Marmaduke 'Gaylord' Robinson before his superior numbers of horse arrive to tip the balance against Parliament. The game is set at 12 Turns and uses my own A Crowning Mercy rules(available from Caliver Books). The following pictures will I trust carry the sense of the action to regular readers ~

The opening move sees a broad advance by the Parliamentary force, while the Blue Dragoons move off to the right to seize the farm complex and secure the army's right flank.

Meanwhile the Royalists head straight for the enemy, though their Red Dragoons are sent to occupy a low hill overlooking the farm and from where they can observe any Parliamentary flanking threat.

Sir Marmaduke Robinson's Foote have a prominent role in the Royalist advance, keen to show their metal before their Colonel who commands the Royalist force.

The first clashes of the action are on the Parliamentary left flank. Obadiah Bykleigh knows he must press home the attack while he enjoys superiority of cavalry numbers before the Royalist reinforcements reach the field of battle.

With the dragoons covering their flank the Royalist Foote begins to form up for action.

Meanwhile the Parliamentary Dragoons have lined the hedge row along the lane, flanked by Lord Brooke's regiment of Foote. 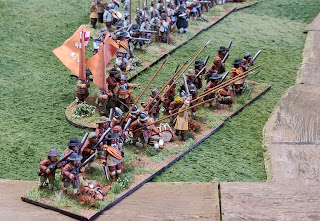 Essex's Tawney coated Foote are ready for action in the centre of the battlefield. Sadly their powder was damp or their ardour stunted as they made little impact on their enemy. (New dice please!)

Royalist Foote formed for battle trades fire with the enemy in the centre of the action. For all the fierce fighting not very many casualties seemed to accrue on either side.

Parliamentary cavalry charges home and with the clash of steel drives back the Royalist Horse. With no sign of the longed for reinforcements it looked promising for a swift Parliamentary victory.

Meanwhile in the fighting to secure St Olaf's the Royalist forlorn hope despite losses drive out the Parliamentary dismounted heavy horsemen who had attempted to seize the churchyard.

Obadiah Bykleigh leads his cuirassier regiment against the Royalist opposite number. A vicious melee where no quarter is given or expected develops which holds up the Parliamentary attack and gives time for the expected reinforcements to appear behind the right of the Royalist army.

The central firefight between opposing elements of Foote remains stubbornly indecisive with neither side giving ground to its opponent.

In the distance the Royalist's newly arrived horse can be seen streaming forward to throw back the Parliamentary cavalry. With no progress in the centre in evidence Obadiah Bykleigh began to sense that the battle was slipping away from his grasp.

Parliamentary Horse and cuirassier break and flee to the rear carrying Obadiah Bykleigh away with them! Parliament's cause is lost!

The Royalist cavalry pours forward past its stoic Foote into the open flank of the Parliamentary Foote. The army is beginning to fade away as a fighting force and the battle is lost.

Obadiah is left to reflect on a battle lost which so nearly seemed won at one stage while Sir Marmaduke can reap the well earned rewards of victory! Eight turns played out of twelve allocated to the game, so a solid win for Phil's alter ego. Next up here in GHQ in two week's time will be a return to Bhyklabad  and the Indian Mutiny. Meanwhile, back to painting Sepoys for the Army of Pendawar...