Finding figures for the Native Cavalry regiments in my Tales from Pendawar project threw up only two choices as far as my web research took me: Redoubt Enterprises or AW Miniatures. As there has been ongoing grumbling on one forum board in relation to the newish owner of Redoubt in respect of decent Mail Order service I plumped for AW Miniatures for the required figures. I'd already sourced my native artillery pieces from them so knew the service was good.

I ordered the larger pack of 12 cavalry, which brings you two different poses of both horse and rider. They were sculpted I believe to be compatible with the Redoubt Enterprises' range, so they are at the larger and bulkier end of the figure spectrum, the riders more so than the horses. This may though be to some extent amplified by the exceptional headwear worn by the troops; I find it hard to make a judgement. All the figures are not in the same jacket, which I found odd. For these at any rate the figures in full dress jacket with lace can represent the junior officer figures. The problem of a suitable European command figure for the regiment I've put to one side at present. 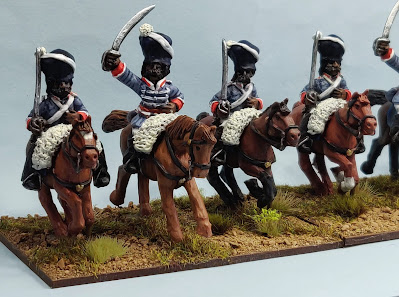 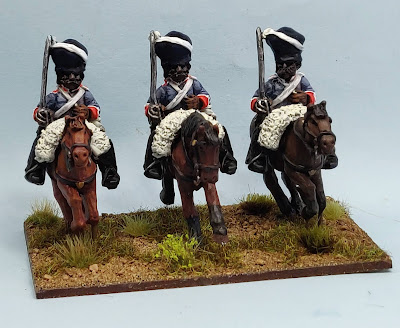 The first nine have been painted up as the Army of Pendawar's 1st Native Cavalry Regiment, using the same British Blue-Grey mid-tone and light-tone shades from the Foundry Triad, for the jackets. There is a further base of three figures to represent a Small Unit, in Black Powder terms, as the Presidency's Horse Guard in due course, but first it's the fourth and final Sepoy infantry regiment to complete that part of the project.

Looking over the Lead Pimple I see that besides those three cavalry figures there remains a unit of mounted tribal warriors and a European battalion of the Voluntaires de Bykli for Typoo's army and for the Presidency's Army of Pendawar a unit of Highland Infantry, sourced from my trip last month to Foundry, as well as a battery of artillery. While on the subject of trips I was sad to see Claymore cancelled for the second year recently, one of my favourite shows too.