...and that's just early in the morning here in GHQ. It's hot as Hades here these last few days and with a game scheduled with Phil today what more natural choice could there be than a return to the subcontinent? In fact a first battle in Pendawar is the game I chose, mainly to get all the troops out and see what, if anything, might need adding over the winter lockdown! (See, I'm a true optimist when it comes to the common sense of my fellow human beings!) Below are pictures from the day to give a feel for the look of the game. We were more concerned with trialing various characteristics than who won - I should say now Phil won in Turn 8 of the scheduled 13.

The left and centre of Typoo's army, the man himself is in the centre foreground of the picture.

The right wing of the E.I.C. Army of the Pendawar Presidency, featuring the 1st Brigade of Infantry supported by a Brigade of Light cavalry consisting of the 'Pendawar Peacocks' and the 1st Native Cavalry regiment. 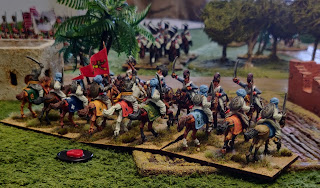 Early action in the centre when Typoo's cavalry tangle with the 'Peacocks'. 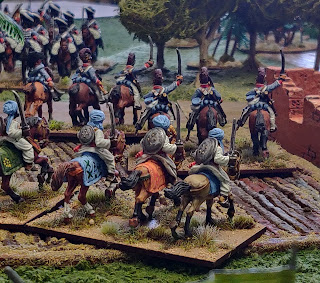 Resulting in an early triumph for Typoo as the 'Peacocks' are routed! They may be pretty but they can't fight it seems.

The difficult terrain on Typoo's right flank is held by his allied Hill Tribesmen and the 'Great Gun of Bhyklabad'. The E.I.C.'s 2nd Brigade attacked them and after heavy fighting drove them off. 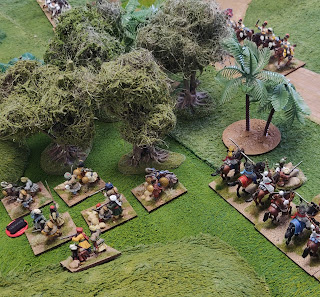 The tribesmen flee! This despite a house rule allowing two turns of attempted rallying! They fled the field!

On Typoo's left flank the troops of the allied Raja of Rhanslistan are holding back the E.I.C.'s 1st Brigade despite losses. The Raja leads his household elephants in a charge against the 3rd Native Infantry Regiment. Closing and Passing fire are ineffective in stopping the heavyweight charge!

It mattered not a jot as the subsequent melee saw the elephants flee, routing the Raja's Household Guard Cavalry in the process!

After several failed attempts the mass of peasants and ner-do-wells finally come into their own occupying the ruins of a village and charging the Bhyklawar Horse Artillery battery! 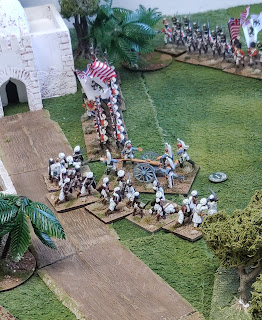 Somehow the melee does not see the gunners break and flee! New Dice Please!!!!

Late in the day Typoo throws forward his Brigade of Regular infantry seeking to split the E.I.C. army in two.

Their supporting cavalry though show a more than marked reluctance to come to their aid when their right flank is exposed.

Without cavalry support the regulars find themselves charged in the flank by the 1st Native Cavalry regiment. Shaken and Disordered markers abound by this point!

With the Hill Tribesmen driven from the field the 2nd Brigade can turn it's attention to the exposed flank of Typoo's regular infantry regiments.

There is nothing Typoo can do. With three Broken Brigades at the end of Turn 8 the battle is lost. He sensibly retires to fight another day.
I'll say more about the modifications and special rules we employed in fighting this battle using Black Powder 2 rules in a future blog post, as we intend to try a second game in two weeks in the light of experience gained today. By then I hope to have added two cavalry commanders to the forces and to have completed the Voluntaires de Bykli for Typoo's army.

Email ThisBlogThis!Share to TwitterShare to FacebookShare to Pinterest
Labels: Games, Tales from Pendawar