Jon and I managed to fit in a Black Powder SYW game recently. As usual it pitted Lord Walton's British force against the French under De Bykli, the Comte du Merde. Like many Black Powder games it veered first one way, then the other, finally seeing the French concede the field with half their army Broken. I was so involved with the game that I forgot to take many pictures, but the few I have might suffice to give the general  overview of how the game turned out `

So, a triumph once more for Lord Walton's command.There will be a bit of a gap now in games here in GHQ as Phil and I are away for a while and I'm not due to host Jon until next month.
Posted by David at 01:14 17 comments:

Pompus Maximus did not perish!

Phil and I decided to revisit our adaptation of Neil Thomas's Ancient and Medieval rules for this Monday's  game here in GHQ. Readers with a good memory might recall that Pompus perished apparently in our last outing earlier this year. Thinking over possible directions we might take the story I decided that rumour had been responsible for the reports of his death; he was rather carried from the field wounded. Reports have finally reached the usurper Baldinus indicating that Pompus has been recuperating in a remote villa estate. Speedily Baldinus musters his forces and marches toward the location. Warned of Baldinus's approach, Pompus musters what forces he has available in the area. He will win if he prevents Baldinus from routing his smaller force, while Baldinus must destroy Pompus's army utterly. A draw is simply a victory for Pompus and strengthens his weakened grip on the Imperial throne...

So, Pompus Maximus retains his hold on the Imperial throne, despite the usurper Baldinus's efforts. No doubt we shall revisit the ongoing saga at some point towards the end of the year. But in the meantime I have to concentrate on other areas here in GHQ.
Posted by David at 07:37 16 comments:

For the last couple of years Colin Ashton and I have made a joint order to Eureka Miniatures for collection from Salute, thus avoiding the unpleasant postal charges and other related impositions, not to mention receiving a fine discount. While I was browsing their site prior to finalising my part of the order I came across these non combatant figures for the Italian Renaissance. I seem to recall there are three or four packs in the range, but I only ordered the one comprising six casually standing figures, three male and three female. I’m pretty sure they are inspired by Romeo and Juliet looking at them. The females seem to be a young girl, her nurse and her mother while the males are a young man and two stern looking mature types. Here they are anyway, so see what you think ~ 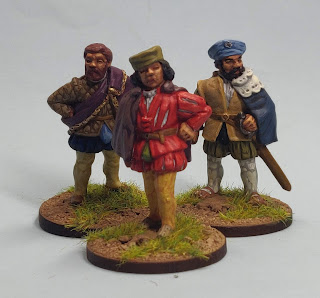 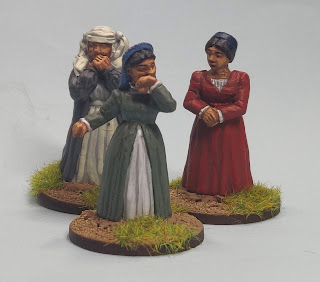 They made a pleasant diversion while the decorating was in full flow and I was still in Renaissance mode after completing the two bases of Light Cavalry for the project (see earlier post if you missed those). Now it’s back to the War of 1812 with a further US Regular Infantry unit in 1812 uniform, from Foundry of course. Will I paint them? “I will try!”
Posted by David at 02:59 22 comments:

I picked up these Casting Room Miniatures from the Foundry stand at this year's Partizan for £5 a pack. I think they must have been clearing out stock. I wanted a couple of bases of Light Cavalry to supplement the Gendarmes and Elmetti in my Papal army of Alexander VI which you may have seen featured, along with Phil's Florentines, in an issue of Wargames Illustrated earlier in the summer. While the figures may not be to  everyone's taste they do paint up nicely I've found so they will do for me at any rate.
I had to fit in painting them around major redecoration of the room I've been using as a painting base since GHQ relocated a couple of years ago or so. This meant that it took me longer than I'd hoped to complete them. Real life, gets in the way sometimes! Now they are finished you can see what you think of them. As usual bases by Warbases and flags by Pete's Flags ~ 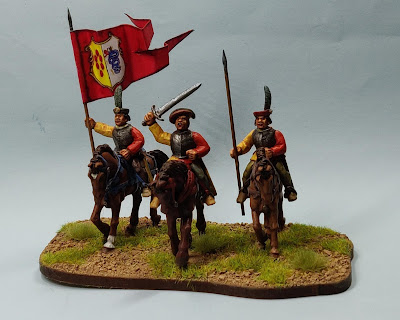 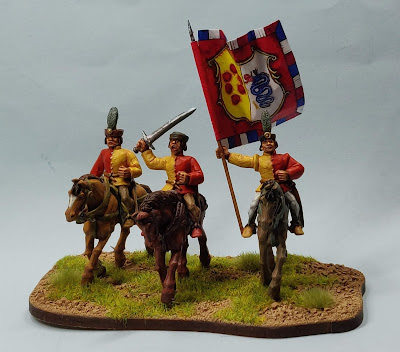 I’ve also started on six Eureka Miniatures Renaissance civilian figures to populate my tabletop setting in future games. If it wasn’t for the disruption of decorating, allied to a trip with Phil to Colours on Saturday, I’d have hoped to have completed them over the weekend. As it is, it will take a while longer...
Posted by David at 00:29 22 comments:

Disruption on the Home Front!

The room where I set up my painting desk when GHQ was relocated has arrived at the head of the queue for redecoration, new carpet and blinds/curtains. It will double up as a bedroom for any of our grandchildren who come to stay when it’s finished by the addition of a Trundle bed. The job will take our decorator about a week, so painting figures is likely to be restricted to evenings for a week or so. Then there is the matter of a new carpet, etc.The desk has been relocated temporarily in our upstairs sitting room, off the master bedroom. If I spill any paint I am a dead man!
I hope to be able to finish my two bases worth of Italian Wars Light Cavalry though. In the meantime, here are a couple of Command bases I’ve completed recently: a Mounted British officer to lead the British Light Dragoons in the War of 1812 and a second Line Infantry Brigade Command base for the French SYW Army. The former is a Perry Miniatures figure with a conversion paint job, while the latter features figures from my Redoubt Enterprises/Grubby Tanks F&IW collection which were surplus to requirements there. Anyway, you can see for yourselves here ~ 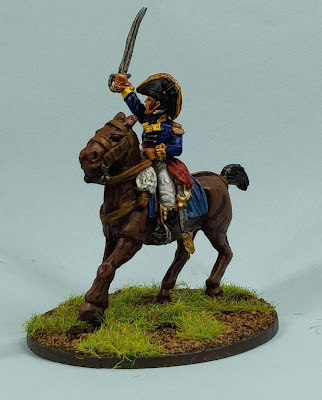 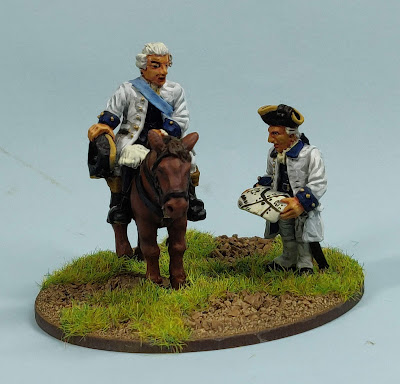