A bit of a thumping, and no mistake...

At the last minute Jon had to cancel our last Wednesday evening game a couple of weeks ago now, a big disappointment for both of us. Rather than clear away the Wars of the French Revolution game I’d planned, using Black Powder as the rules and pitting early Revolutionary French against Austrians, Phil agreed we’d simply play it on our regular Monday slot. Now in its turn that was almost two weeks ago now! Some family trauma has delayed any hobby activity since, but now things are back on an even keel I have time to share some pictures of the game.
The game saw both sides battling for control of a strategic bridge crossing an otherwise unfordable river. Phil commanded the Austrians and I took the French for this game. As is usual a few photos to try and capture the flavour of the game as it ebbed and flowed over six turns ~

We hope we shall manage to fit in a game on Monday, but that is very much dependant on events beyond our immediate control. If we can we plan a second Italian Wars game to test out our mash up rules I've mentioned before. In the meantime, its back to Landsknecht pikemen whenever I get a free moment or two!
Posted by David at 04:10 20 comments:

The beginnings of my Palazzo project

Now, please don’t any of my loyal readers get carried away and expect this to be completed next month, this is a long term effort in support of out Italian Wars project. I plan to build a centre piece for the games in the shape of a Palazzo typical of the period but suitable for the rigours of the wargames table . My days of scratch building, such as they were, are long gone so for this project I shall be using commercially available MDF kits from a number of manufacturers.
From my favourite supplier in the field, Warbases, I shall be using their Modular Buildings and Extras; from Charlie Foxtrot a Renaissance tower; from Sally Forth a basic Tower with Italianate crenellations; from Sarissa a plinth from the Gangs of Rome series; from Foundry the Roman figure to proxy a statue; from Wills the plastic sheets of pantiles; and finally, from Supreme Littleness Designs the ornate widow. In addition Martin at Warbases cut me the 3mm MDF base and supplied some Roman stone window surrounds not usually available separately. I’ve taken some pictures of the probable layout, including a plan view which I hope will give an idea of the final piece ~ 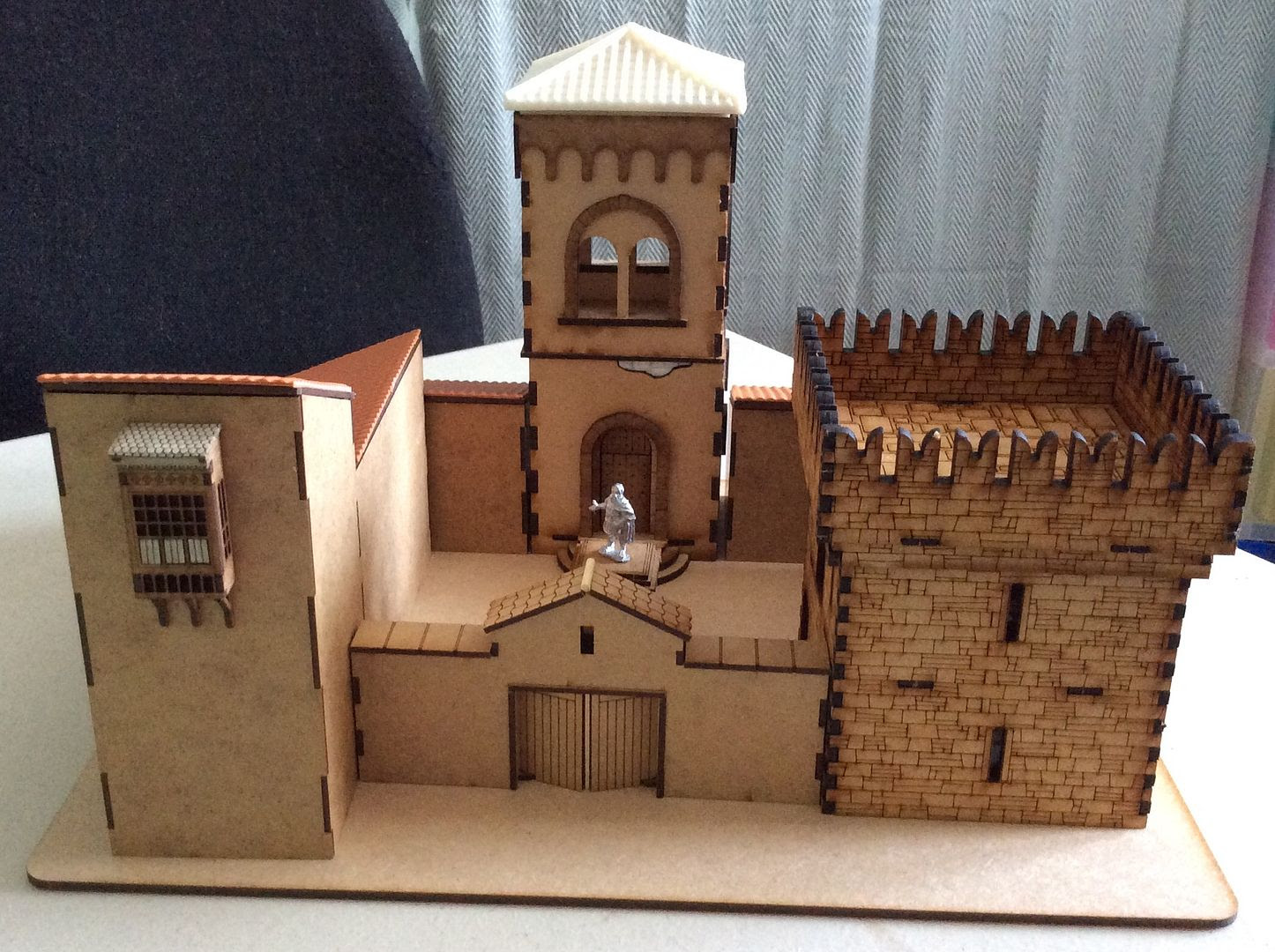 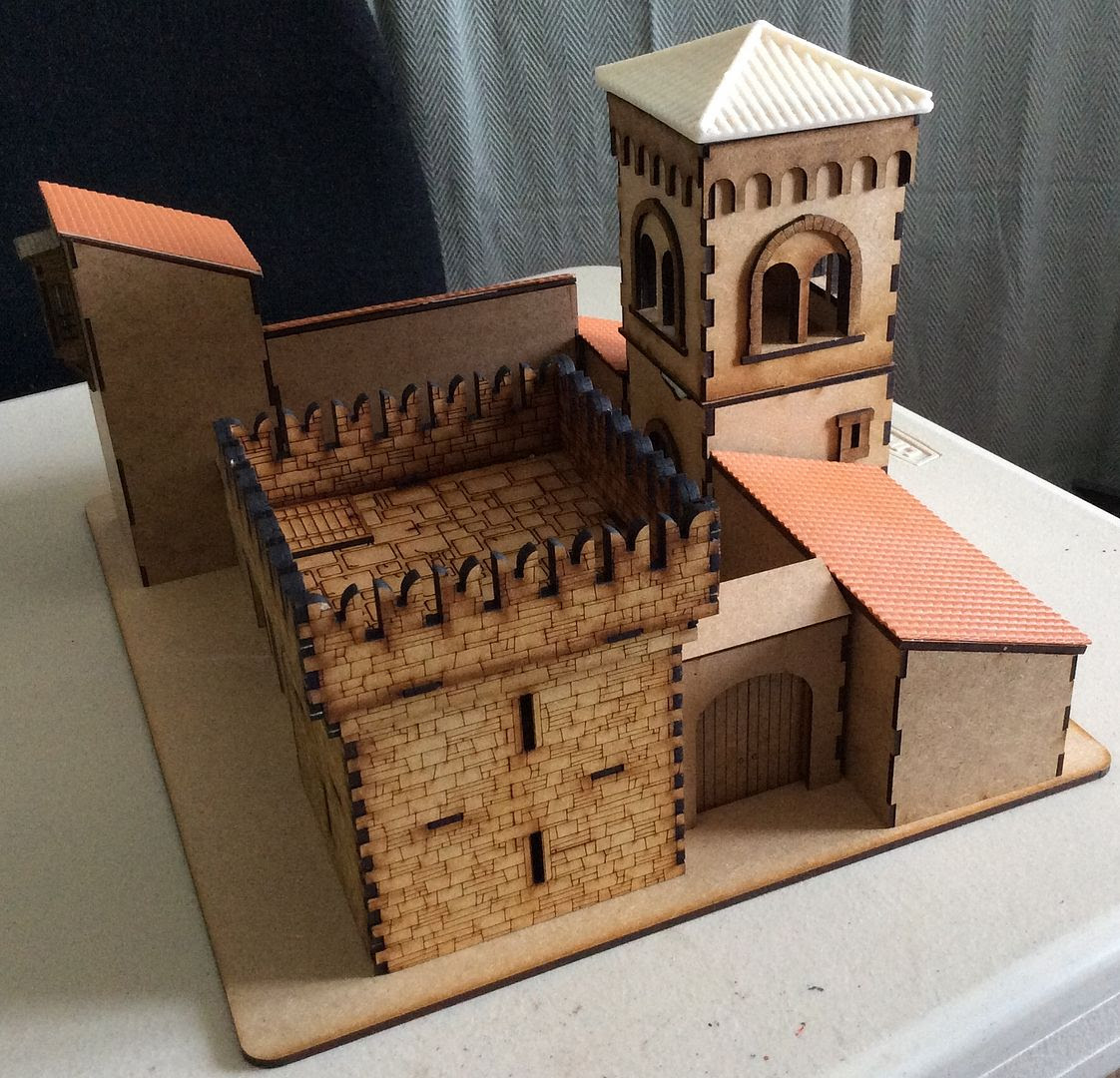 The defensive tower and side gate 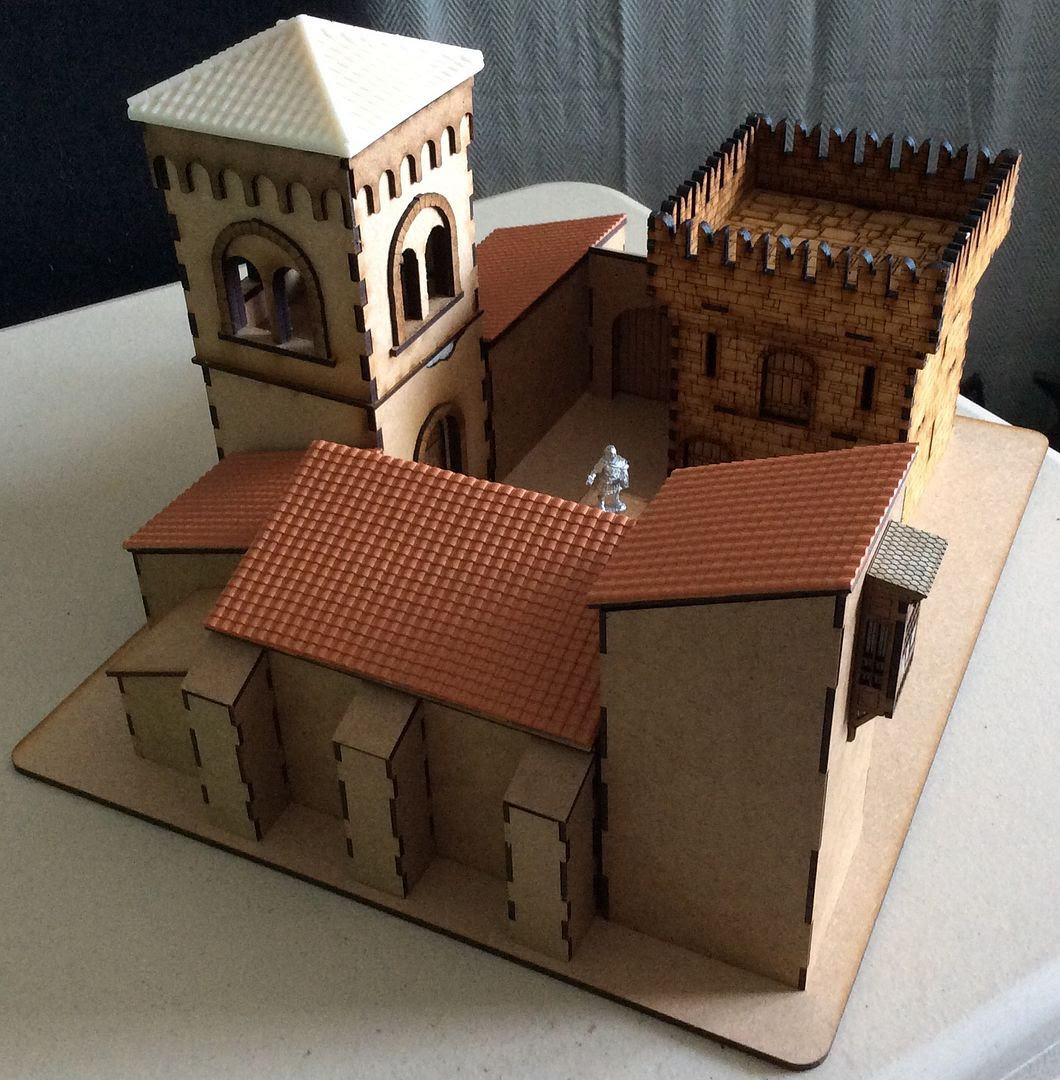 A view of the living accommodation

On Sunday Phil and I travelled over to the Newark Showground to visit The Other Partizan. For me this was especially anticipated as I’d missed the May incarnation of Partizan as I was unable to travel that far so soon after hip replacement surgery. I was up bright and early, almost reminiscent of a kid at Christmas! I had a number of preorders to collect and some surplus figures to deliver too, so these tasks occupied me as soon as we entered the hall. First up, a tower for my Borgias’ Palazzo project from Sally Forth. This is the first time I’ve ordered anything from them and I was much impressed by the exemplary service both on ordering and on collection. I got a basic tower kit with an Italian style crenellation option and a wooden staircase ~ 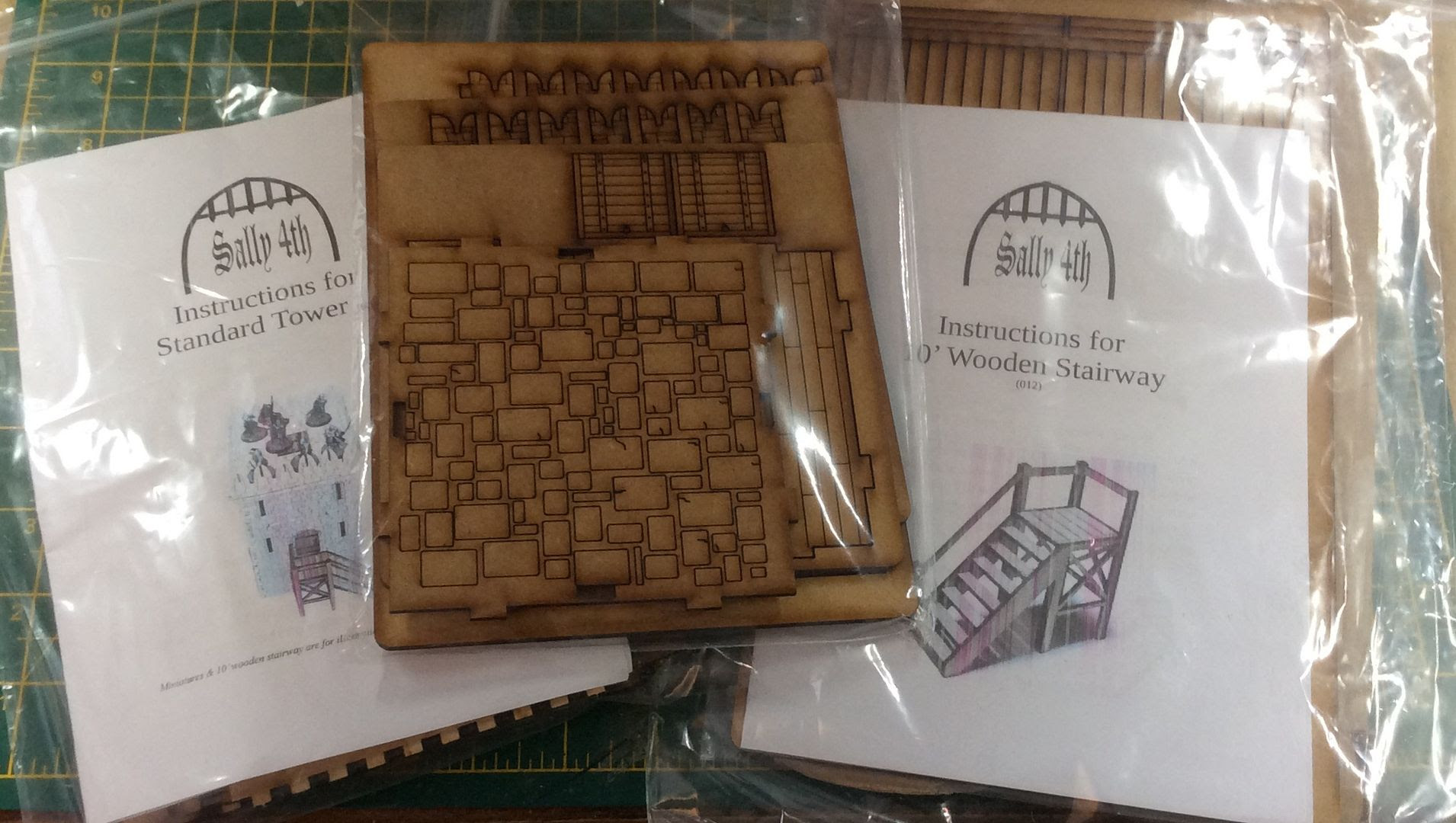 From my favourite MDF merchants at Warbases I collected a preorder of more Modular Buildings, a hay cart and hay load, more bases of course, including two large bespoke pieces for the Palazzo and for another general building. Most pleasing though was Martin’s readiness to cut me some Roman style stone window surround pieces, usually only available in other building kits. Again these are destined for the Palazzo project in due course ~ 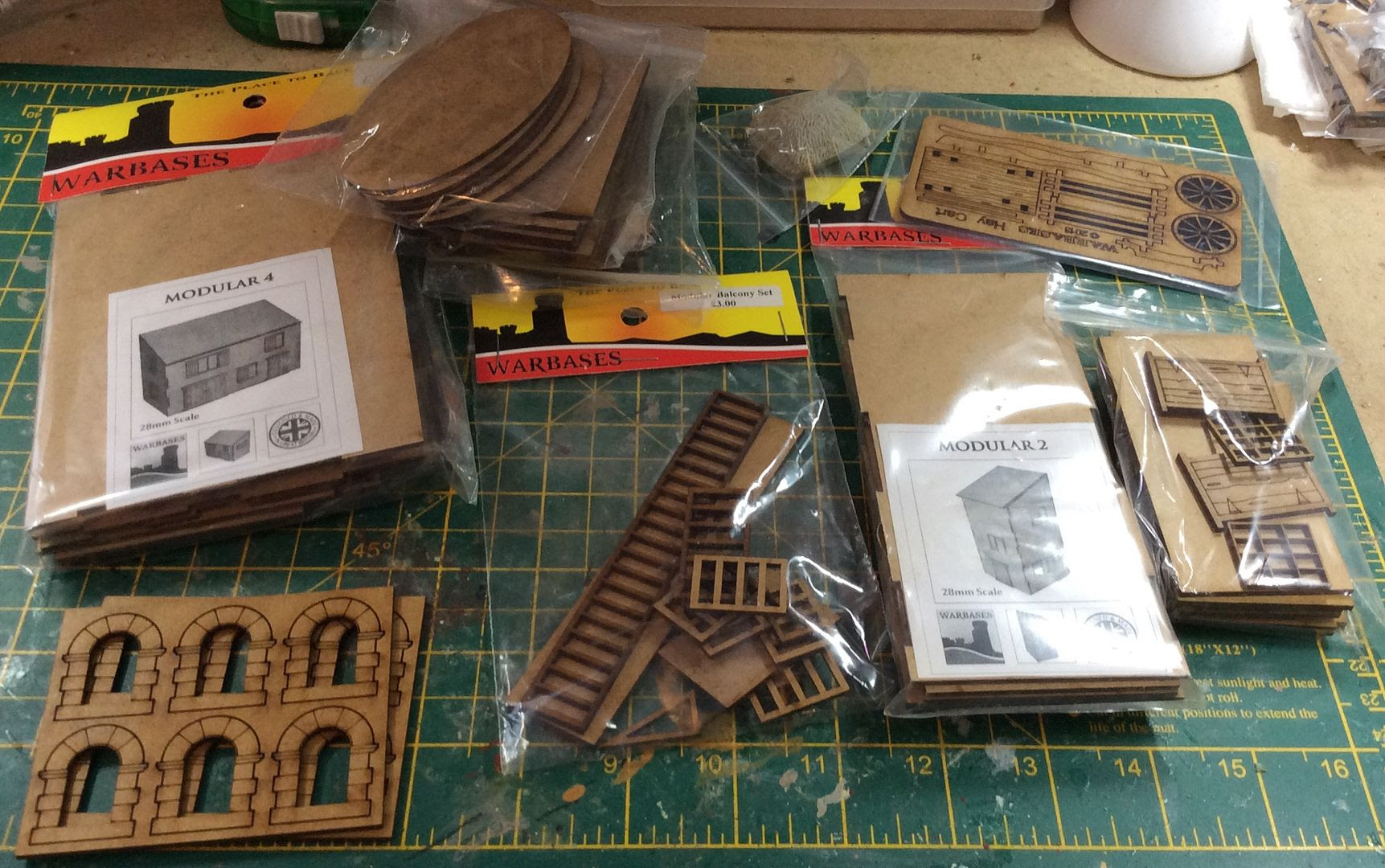 From Sarissa I picked up a set of plinths from their Gangs of Rome range. After all, the Palazzo will need at least one statue to gaze on ~ 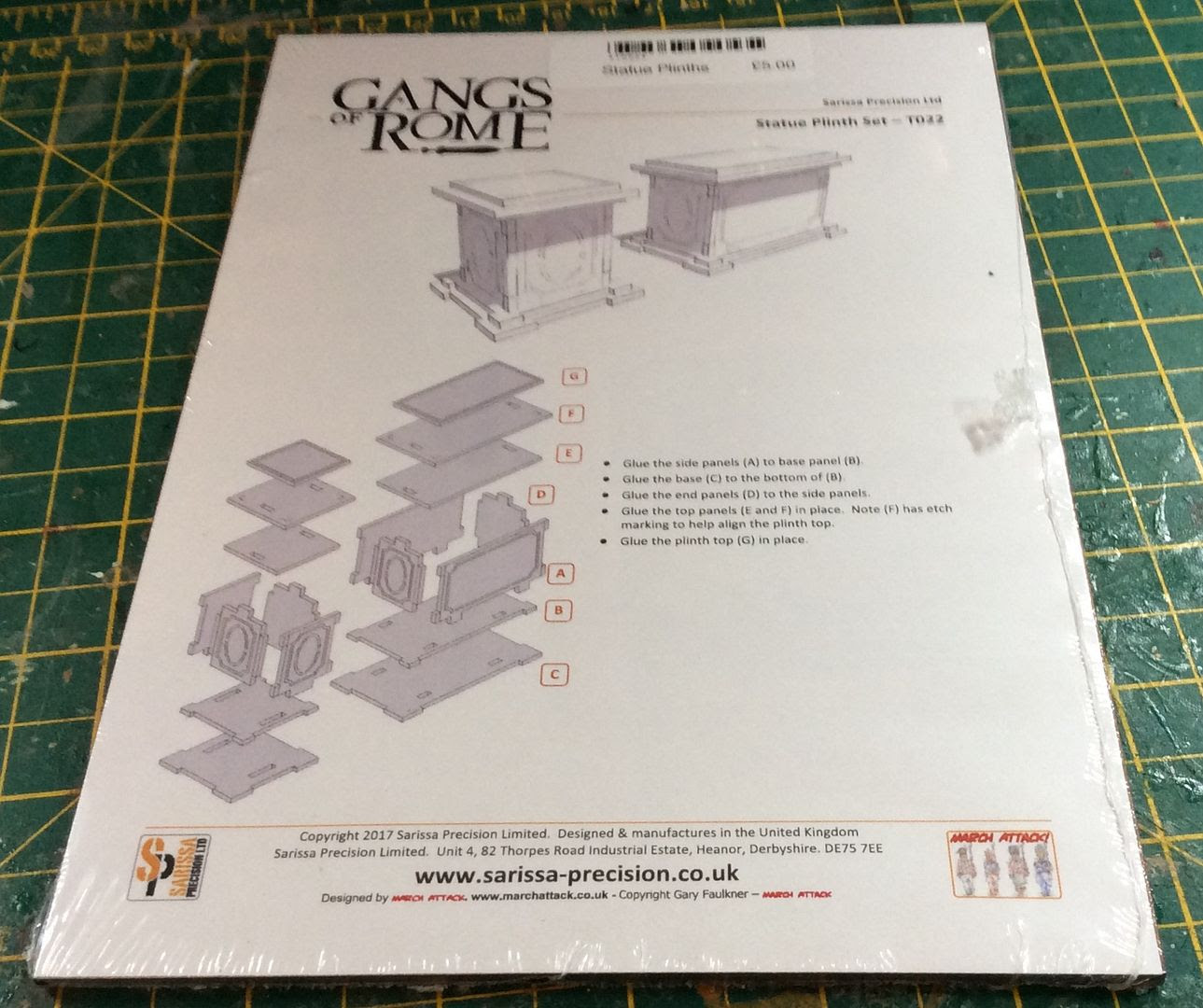 From Great Escape Games I got various Tufts and clump foliage as stocks in GHQ had run low. I did buy just a few figures as well: a Tsuba band from Empress, a vet and shepherd from 1st Corps, and three figures for the VBCW project from Footsore, an eye watering £3 a figure! I’ve also pocketed
the free figure given on entry to the show and ear marked it for the VBCW ~ 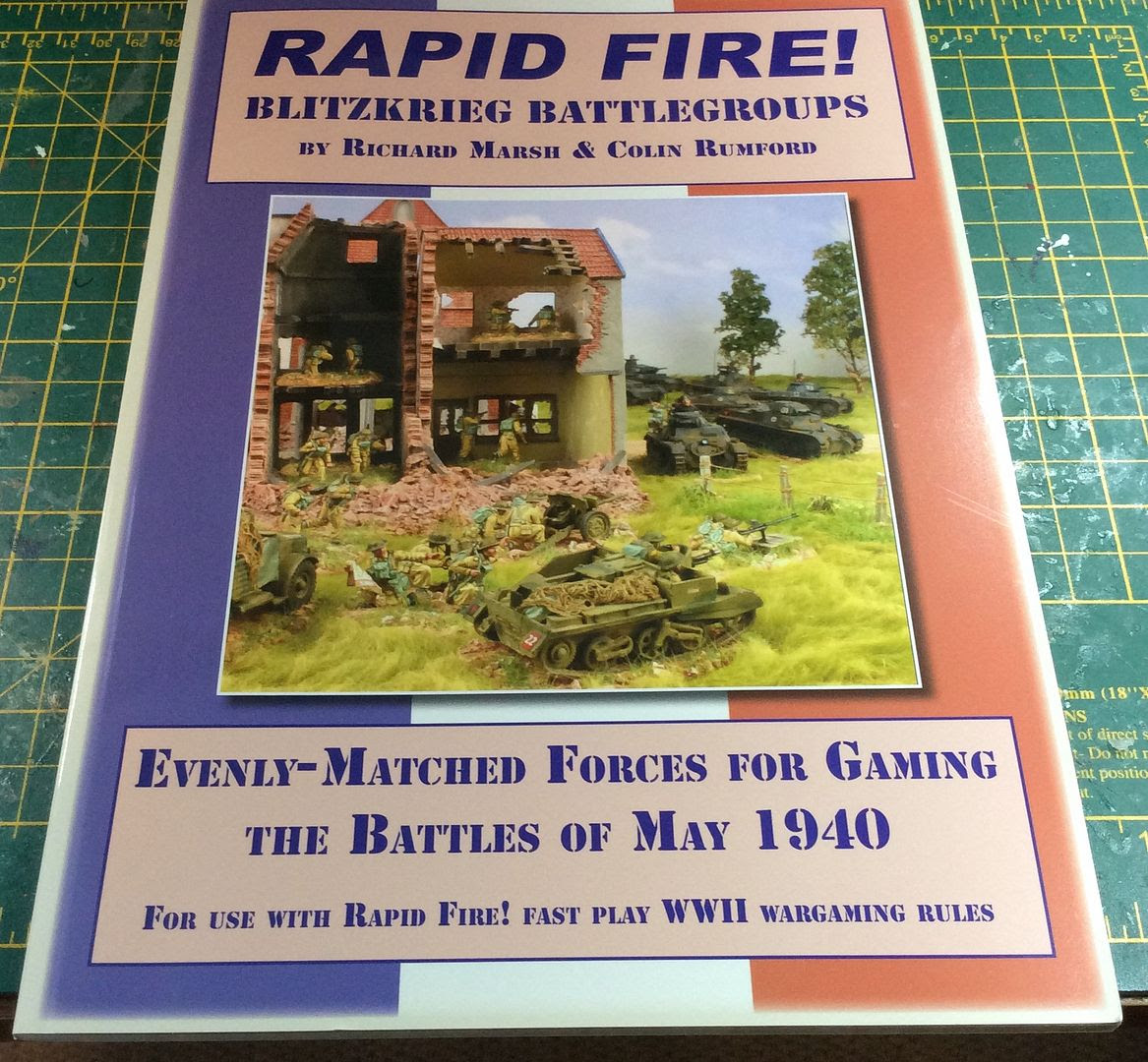 We intend to try out Rapid Fire 2 in our 28mm 1940 and Operation Zeelowe games, and this publication should prove invaluable in organising a few trial efforts over the coming months. I must say I’ve always found Rapid Fire my favourite rules for larger WWII games, so I’m looking forward to seeing how they shape up in 28mm games now.
By now you will have noticed that there are no pictures of the games! Well, I forgot to take my iPad with me in the excitement! I have to say though that there were some nice games, but none that popped for me at least. Were my expectations too high I wonder after months out of the front line or was I just too busy shopping and chatting to friends old and new ( Hello Robbie!) to pay enough attention? I honestly wouldn’t like to say. One impression I did come away with though was that the show seemed, like Claymore earlier in the month, a little quieter than I remember from other years. Again, it could be just me, I shall wait to see what others say!

As I’ve mentioned previously I bought a load of early Citadel/Foundry Landsknechts at Barrage back in June. After sorting through them at home and making up another pike block from the two packs, together with the remaining Warlord Games standing pikemen from the mixed poses set, I had enough spare figures to make up this base of Halberdiers ~ 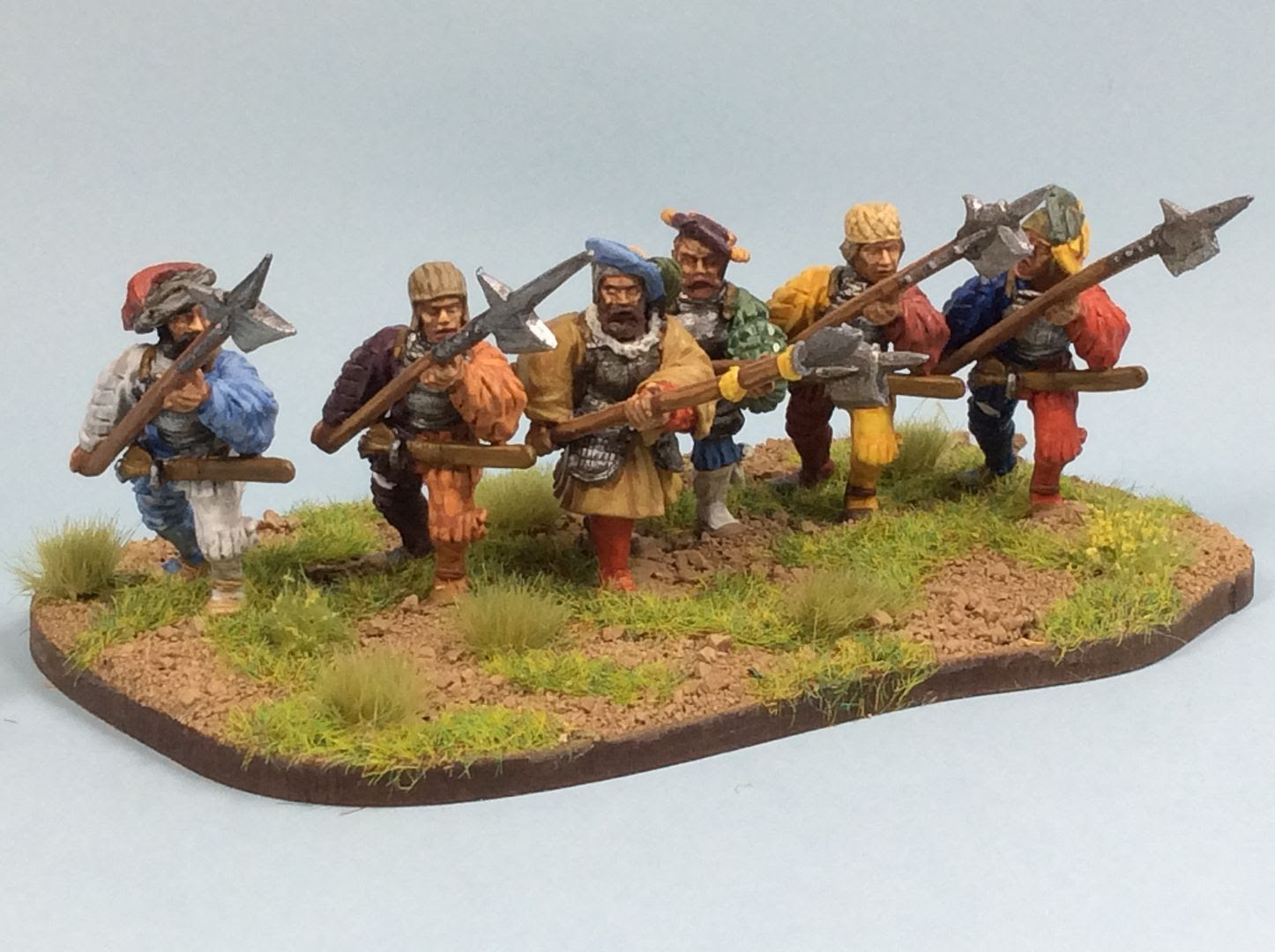 These figures were sculpted by one or both of the Perry twins back in the day I believe. They won’t thank me for saying but the work is far superior to the stuff they churn out nowadays in my opinion, and the casting is far cleaner! Sometimes it seems things were better in the good old days! 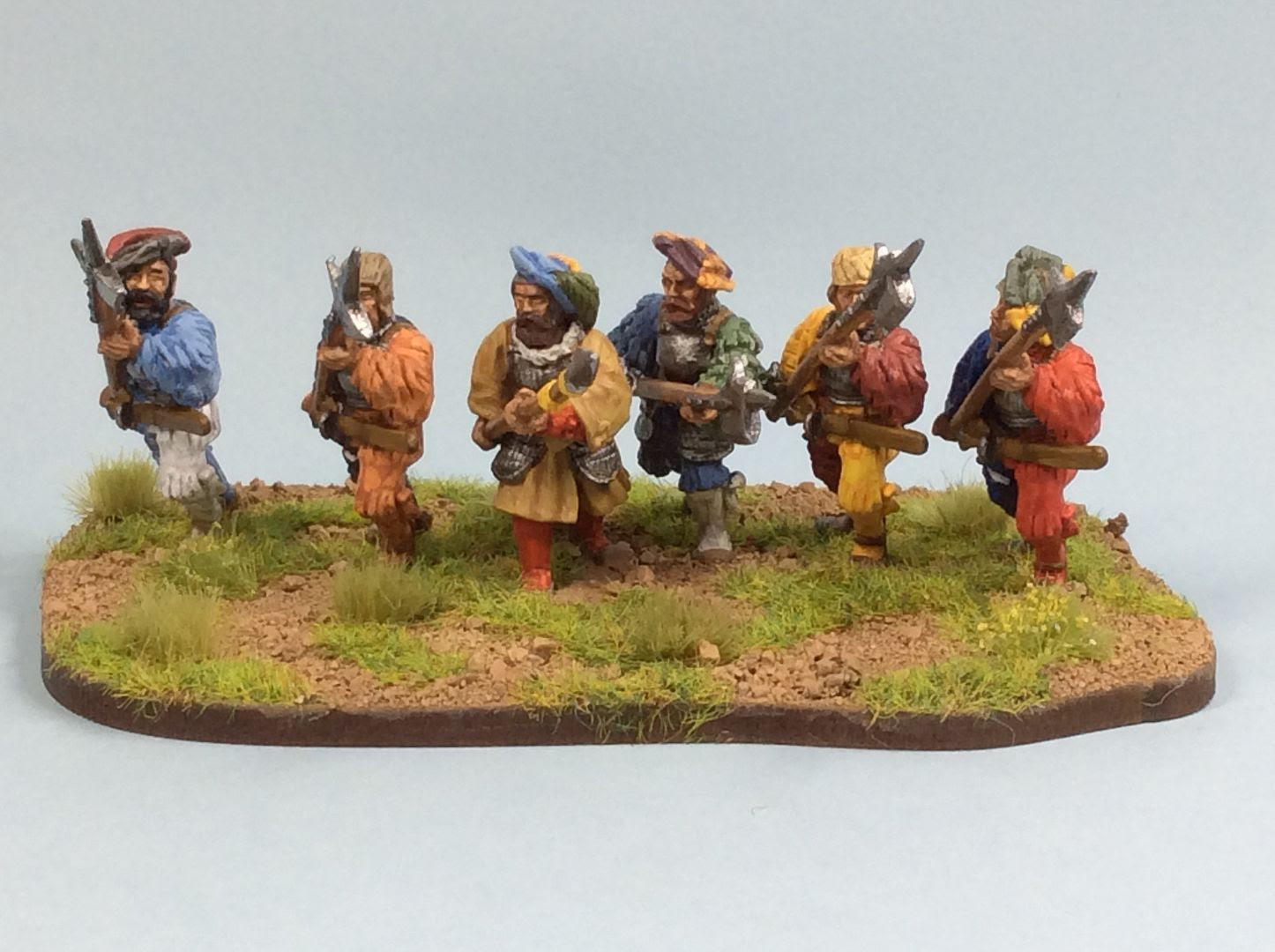 I’ve also made a start on the final Landsknecht unit, the third pike block I mentioned at the beginning of this post. I’ve finished four pikemen already and I’ve also got some paint on several others. Not much progress though over the weekend as I was out at the football on Saturday and at The Other Partizan today.
Posted by David at 11:12 10 comments:

Either side of our trip to Scotland, including a visit to Claymore (see previous Blog post), I’ve been working on what is for now at least my last TAG group of figures for our Italian Wars project, in this case a base of handgunners for my contingent of Landsknechts. As with all my earlier work on the TAG figures, they are easy to paint - for Landsknechts that is! 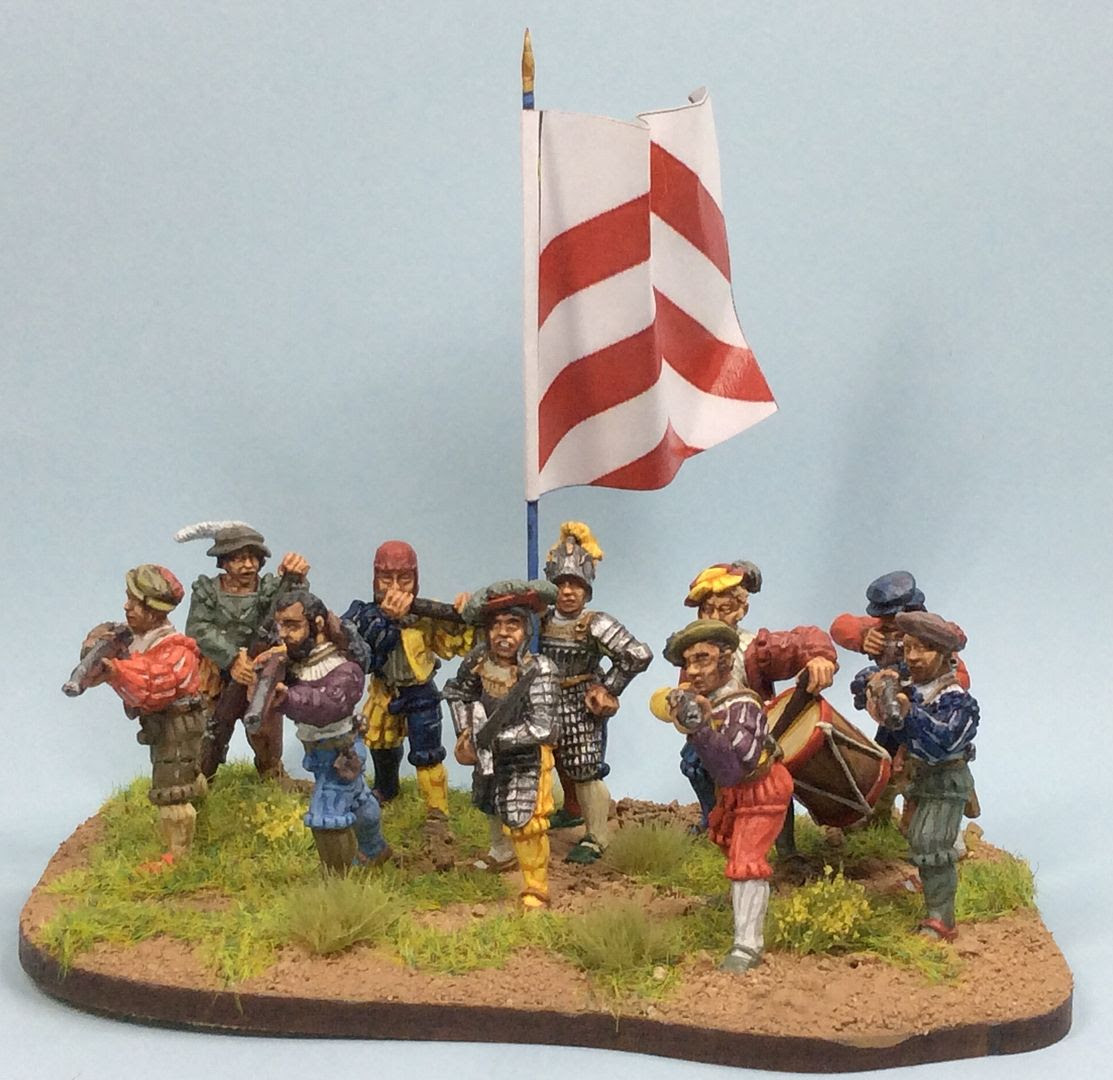 As far as the project goes at present I shall be left with a base of Landsknecht halberdiers and a third base of Pikemem to complete. These are some Warlord and Foundry/early Citadel figures I picked up for a song back in June at Barrage in Stafford. The latter are lovely figures, full of detail and life and, in my opinion, far better than the more recent work by the sculptors. 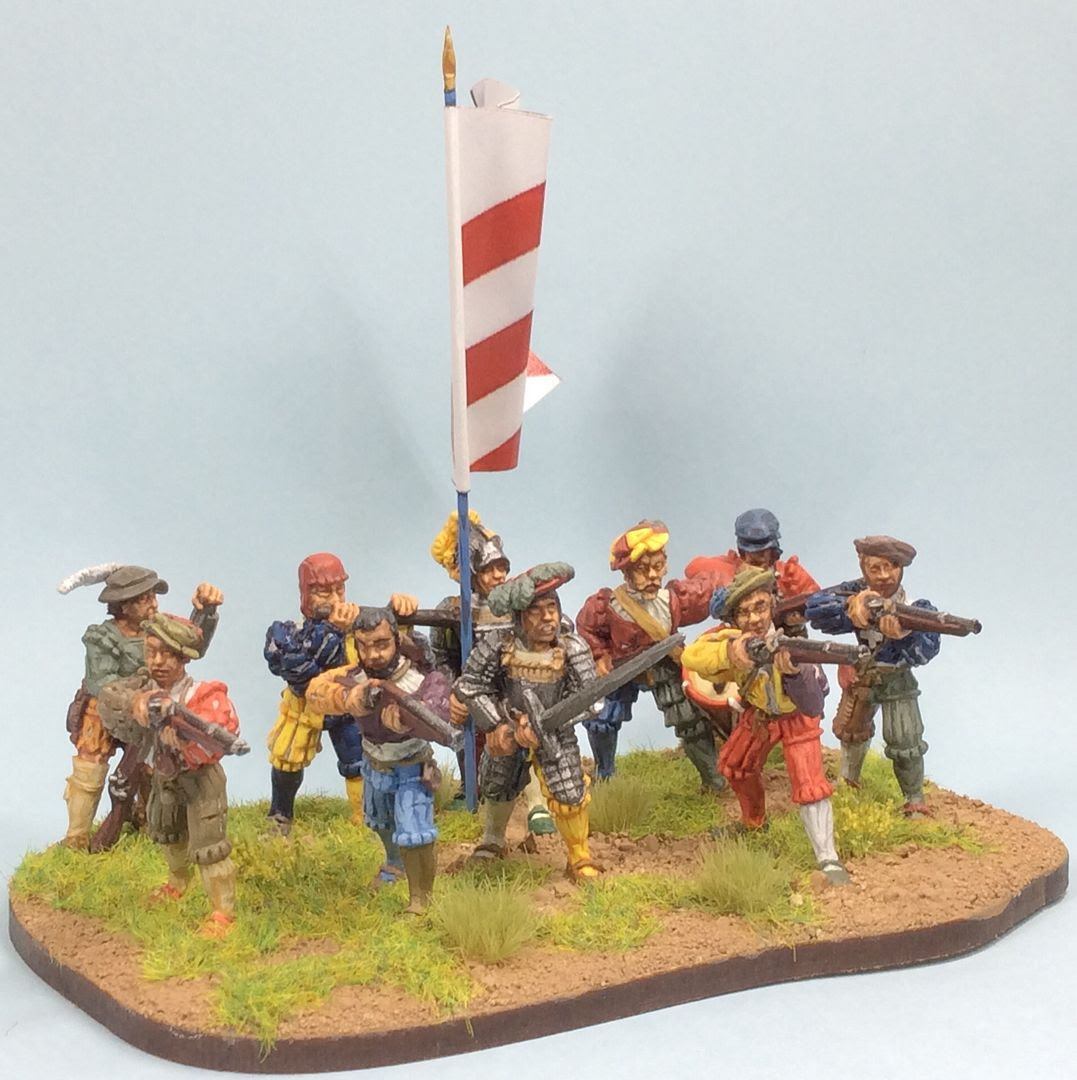 When these are completed it will be back to the C18th in the shape of my AWI additions, alternating with my remaining figures for my Wars of the French Revolution project. If all goes well all of this will be interspersed with my Palazzo for the Borgias MDF project! Well, we can plan, at least for now... You never know, but purchases at The Other Partizan may derail all of that!
Posted by David at 03:02 18 comments:

...Claymore, Scotland’s premier wargames show. Always high on my list of favourite shows to attend I must sadly admit to being a tad disappointed this year. Perhaps I should rephrase that on reflection, a tad less impressed than I expected might be better. The show seemed less crowded, bar the Bring & Buy, and we’ll pass quickly by the stench I encountered on my sole brief visit, and there seemed less of a buzz around the games than usual. Of course, that could just be an impression gained by being in the wrong place at the wrong time, I’ll never know.
Nevertheless I enjoyed my day. I met good friends, I bought most of the things on my list, I did see some games I liked and I chatted with several traders, some who I seem to have known forever! I’ve decided not to include a full picture report, most folk will have seen many pictures already, so here are three of the Iron Brigade’s alternative Zorndorf game featuring Kevin’s Prussians, mostly from Calpe with some Front Rank support, and Peter’s Russians, all admirably supervised by Emma - hope your exam results went well today! 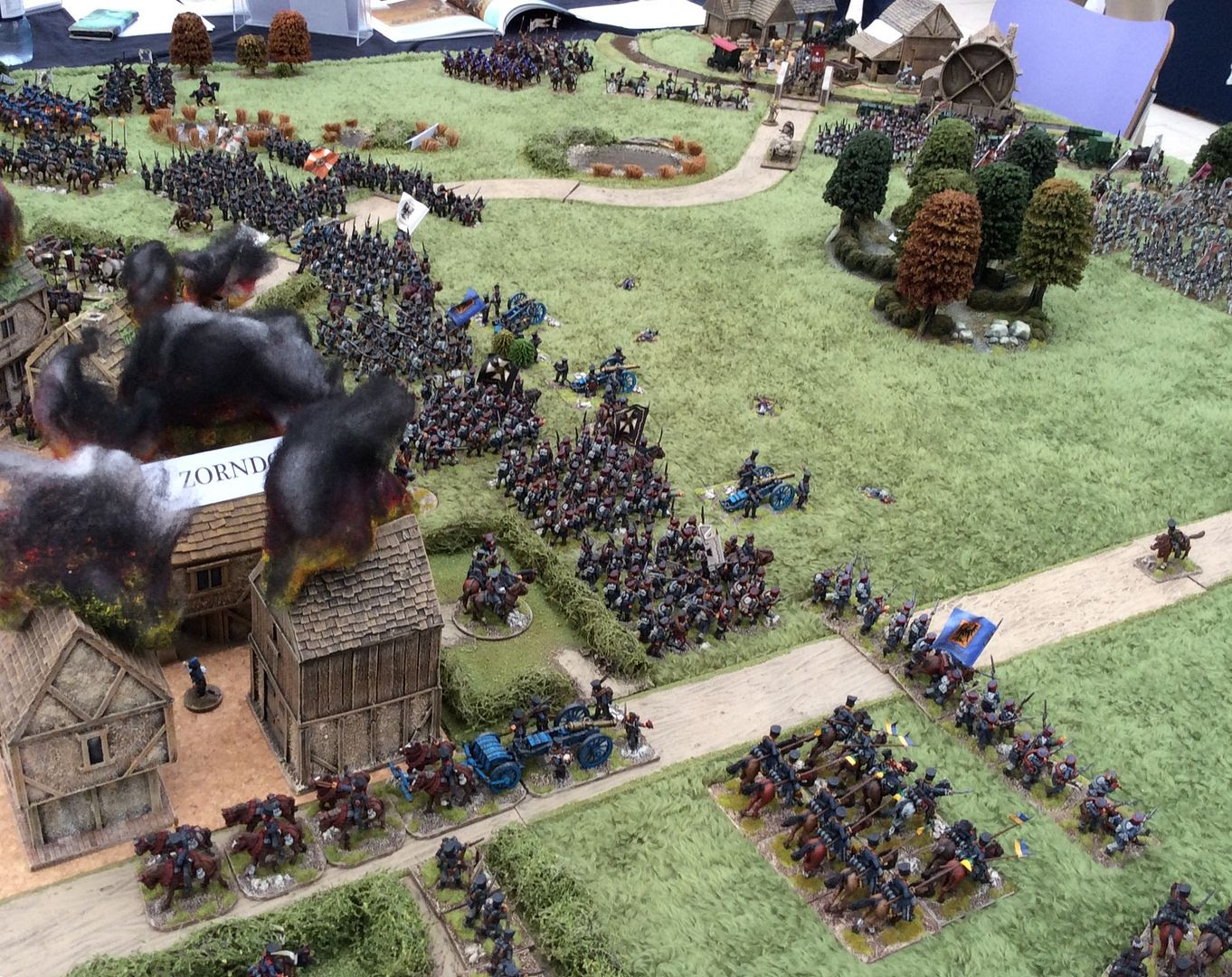 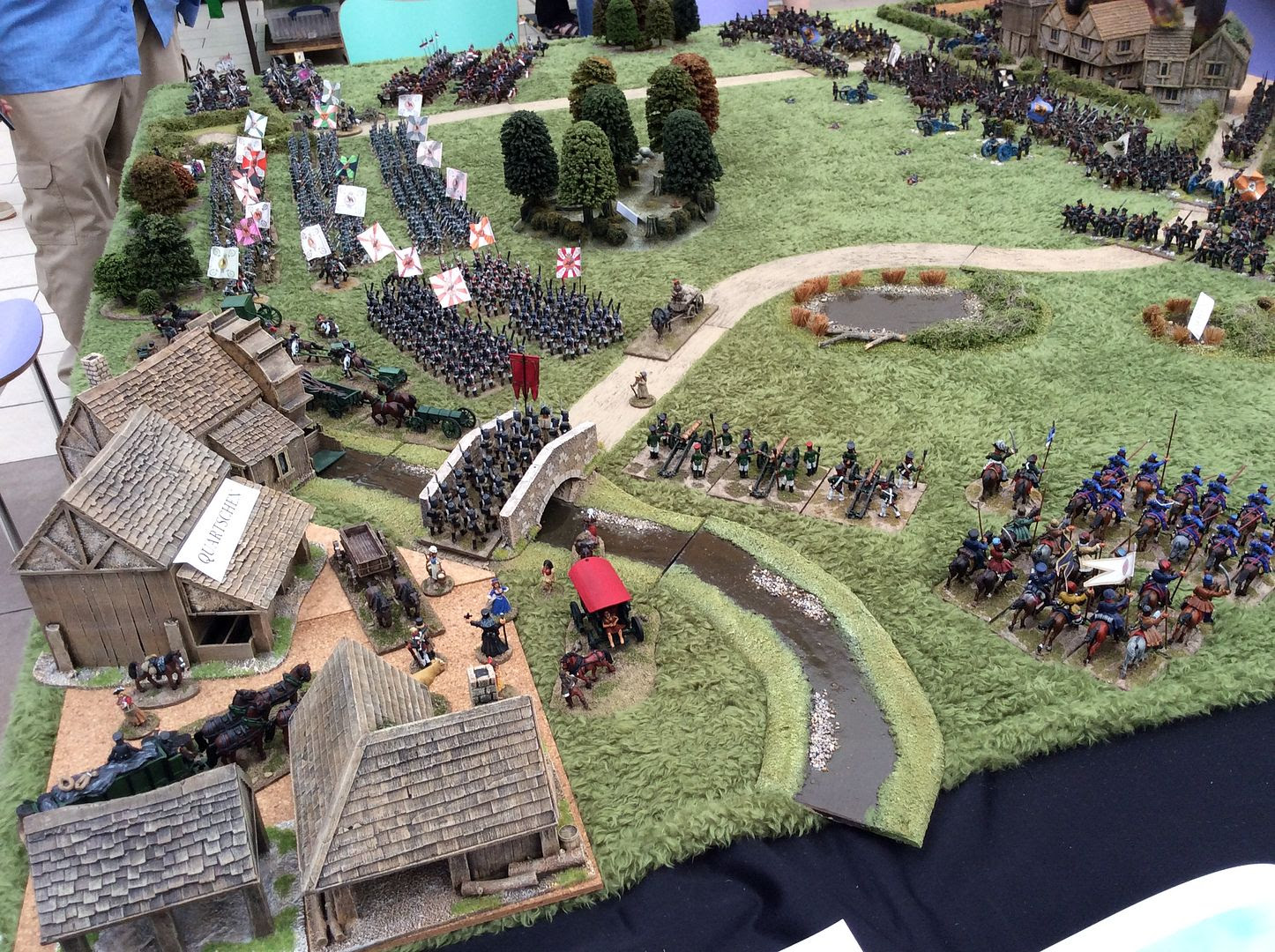 I always enjoy seeing the Iron Brgade’s games. They deserve a far wider audience in my opinion. They are beautifully presented and full of interesting extras, vignettes, scenics and the like. Their game came second in the Demonstration Games section of the show awards. They was robbed if you ask me! Meanwhile, by way of a change, The Redoubt Castle Hotel in Bonnyrigg, our basefor our stay. Quite wonderful, highly original and the warmest welcome we’ve ever received anywhere. Highly recommended if you’re ever that way. 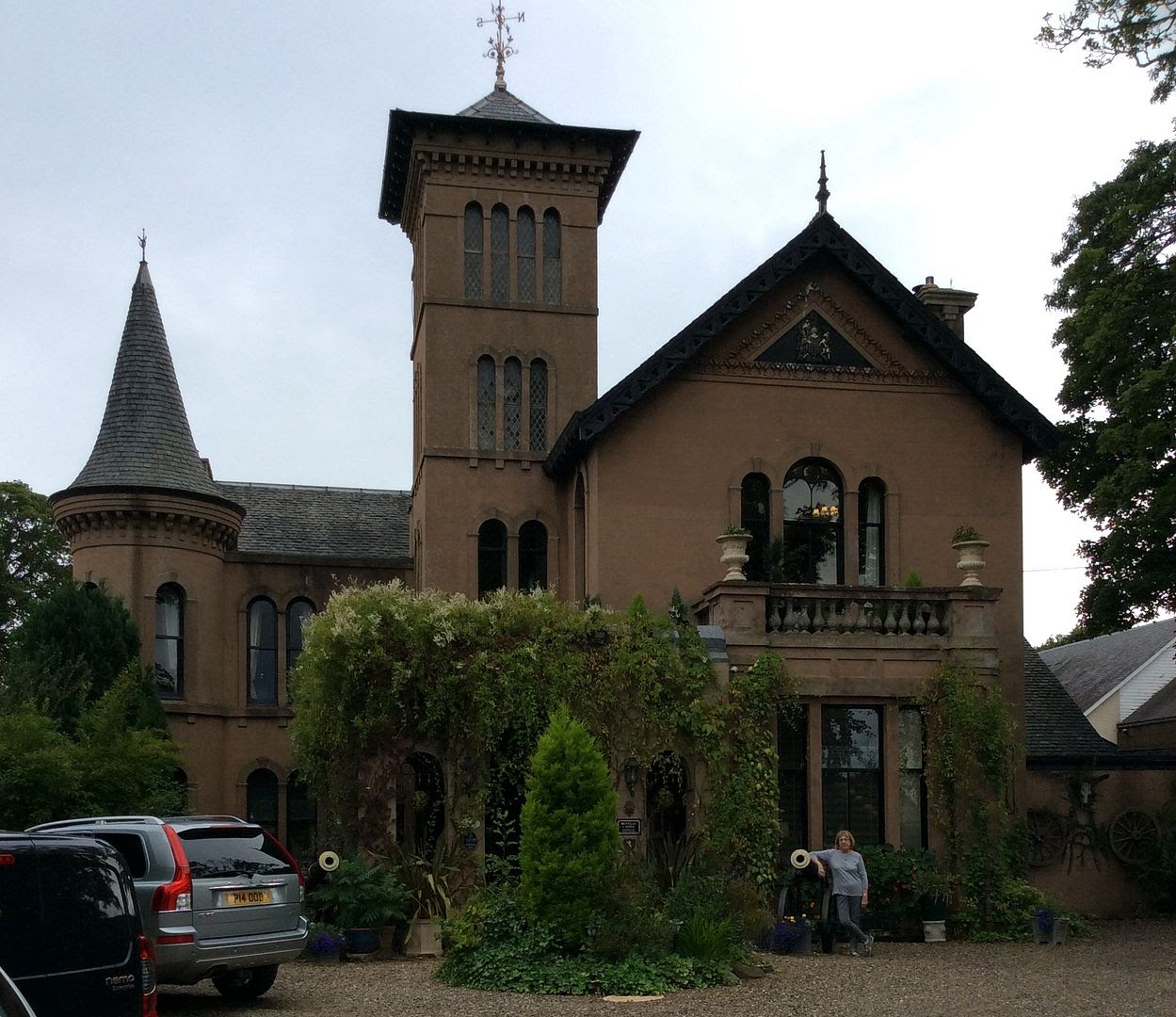 Next up for me as far as shows go will hopefully be The Other Partizan, one of the other highlights of my wargames show year which I always look forward to. You’ll probably have noticed by the by that I’ve no swag picture. Why, you ask? Well, I bought one figure and heaps of MDF building kits and extras, not exactly photogenic, oh and the Wargamers’ Annual 2018. I hope my TOP swag will be more diverse, we’ll see. Meanwhile, back to painting Landsknechts!

This week’s game in GHQ between Phil and me was a Black Powder War of the French Revolution game, with Phil, as De Rawnslie, leading the Revolutionary French army and yours truly,  as von Bikkelberg, leading the Austro-Hanoverian defenders of Lembeek and its strategic bridge over the River Semme. The Austrians win if they deny the bridge to the French, the French if they have one Brigade over the river by the end of Turn 8. Either side can win of course by defeating the enemy on the field of battle.


Black Powder never disappoints we've found in delivering a game in which fortunes swing first one way and then the other. The game was on a knife edge throughout and could have gone either way a number of times. The Austrian cavalry performed heroically, but were ultimately defeated by weight of numbers. French Command rolls were often indifferent, but their fighting was overwhelming in far too many instances for their opponents. Despite the result being disappointing for me, I thought this was an excellent game and thoroughly enjoyed it, as did Phil.
Posted by David at 03:45 16 comments: