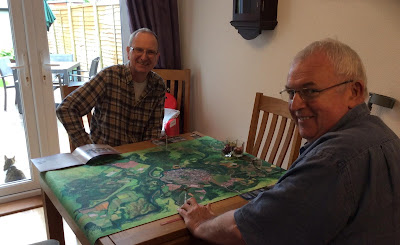 There is a long story behind Phil's second visit to GHQ in two days, but we'll stick with the short version: Dianne's car is broken down on our drive so Phil has run her over to work, just up the hill from us, and so spent the day here while waiting for the mechanic to fix the car, which he did not manage today, needing to order a part! So Phil will be here again tomorrow at some point, with Dianne, to hopefully collect the fixed car!
We passed some of the day trying out Wings of War, the WWII version, which I had picked up from a previous year's Penkridge Tabletop Sale for £20. I've bought a few extra planes over the elapsed time and Jon kindly gave me on of the mats to play over. So, Flying Officer Bicclesworth versus the vile Hun, von Robbensahn! We played three games, slowly absorbing the basic rules as we went along.
First blood was to Phil, shooting me down in turn two! Three damage chits drawn, total 17! My Spitfire went down in flames! The second game was rather more cat and mouse, but eventually the hero of the RAF sent von Robbensahn to his doom in his flaming M109! For the third and deciding game we swopped sides, Phil taking the Spitfire and myself the ME110 for a change of game. Despite neither of us exactly setting the world aflame my rear gunner had several hits on the Spitfire to only one on the ME110 when disaster struck. I misread a card and flew off the edge of the table into the sunset, handing the deciding game to Phil! We enjoyed ourselves as you can probably see from the picture Sue took of us. {Note the squadron moggie, FO Phoebe, on duty outside by the way.} We hope to play a game in GHQ next week, but what it is will depend very much on how I am after the weekend...
Posted by David at 12:34 12 comments:

Three weeks on from my discharge after the hip replacement operation  Phil and I met up in GHQ for a second try at the Black Powder F&IW game, with Phil commanding the British and yours truly the French. We employed the same modifications and additions to the rules as in the previous game, mainly to test out their possible inclusion in other periods we play using them, though the British added some support from a Great Lakes sloop. The French won the initiative dice off, at the third attempt, and proceeded to fail all Command rolls in their first turn! Pretty much the story of the whole game from my perspective. The game lasted 15 turns in about 21/2 hours and the following pictures capture the flow rather nicely I feel ~

I was shattered after about two and a quarter hours of play, but also elated to have played a game much sooner than I thought possible before the operation! I've also been able to start some short painting sessions this week and have almost finished a Command base for my mercenary Landsknechts in the pay of Cesare Borgia and the service of the Papal States army. Phil will be here tomorrow again and we hope to have a go at Wings of War, the WWII version. Now, time for my nap I think...
Posted by David at 10:18 13 comments:

The Attack on Fort Desperation

For the first, and possibly only, game here in GHQ in May Jon and I played a French and Indian War game. We used Black Powder for the rules with two adaptations: firstly, you could give orders to each base of figures as well as to units, with each unit having its own commander under the CinC; secondly, units which routed could try to rally on a -2 in the next turn and a -1 in the turn following. After that, Routed units left the table. Both adaptations worked smoothly we thought and the game swung back and forth over 10 Turns before a clear winner emerged. I took a few pictures to capture the essence of the game which I hope will let you see how it all panned out ~


Although I had originally hoped to play out the game with Sharp Practice 2 as the rules I found I was too preoccupied with my coming hip operation and fell back on our favourite Black Powder rules instead with the additions noted above. The game went very smoothly and the rules proved versatile enough to cope with our changes. I've left the game out on the table in GHQ as I hope to play it again with Phil when I'm just a little stronger in the hip department.
Posted by David at 01:40 22 comments:

...meets Forest Gump. As some of you may know from other social media sites I was discharged from hospital on Tuesday evening ~

I had intended to blog the French and Indian War game Jon and I played on the Wednesday previously, but I have seriously underestimated the shrinking of my horizons post surgery. My daily routine seems to revolve around walking, resting and eating, and that’s about it! I’ve got as far as uploading the pictures from the game, so perhaps next week, eh? In the meantime, if you are squeamish then look away now ~

Now, the question: who can link the pictures to the film titles explicit in the title and opening remark? No prizes sadly...
Posted by David at 11:13 12 comments:

I’m for the chop this time!

All quiet on the GHQ front for a while now folks as my hip replacement operation is scheduled for tomorrow morning! I report in for 7.30am and the theatres start work at 9.00am, so I hope to be done for lunch and taking my first steps in the late afternoon.

All being well, hopefully, I shall be home on Monday and then it’s walking as much as possible for six weeks until I see my surgeon again. Keep me in your thoughts if you have a moment tomorrow morning please. As Arnold might say, “I’ll be back!”
Posted by David at 09:27 14 comments:

I’ve managed to complete the first of my two planned mercenary pike blocks for my Italian Wars project. The figures are a mix of several manufacturers: TAG; Steel Fist; Warlord Games; Dixon Miniatures; Essex Miniatures; Tiger Miniatures; and Hinchliffe. You may well ask why? Simple really, most were a gift from Tim Hall of surplus figures. I guess the cost of the unit was about £5.00 at most.

The flags were found as free downloads on the web and represent the German city of Nuremberg. I’m pleased how well they turned out in the end I have to say, although adapting what passes for my painting style to older figures was a challenge, as was working out colours for the figures of these early Landsknechts.
Painting has come to a standstill for now. I don’t anticipate picking up the brushes in anger for a couple of weeks now. When I do I have a second Landsknecht pike block, by Warlord Games, and a further Command Stand of Cesare Borgia and staff, on foot this time. Beyond these I will need some crossbowmen and handgunners to support the two Landsknecht pike blocks, but sourcing the appropriate figures will have to wait now. I’m hosting a F&IW game for Jon tonight, but won’t get around to blogging that before next week, so keep an eye out for ‘The Attack on Fort Desperation’.
Posted by David at 00:26 6 comments: