There are 24 Eureka Miniatures in the unit I'm currently painting, the Voluntaires de Bykli. If you remember they were a gift from Aly Morrison at a seemingly distant Partizan. As it will be a while until they are completed I thought you might like a sneak preview of those I've completed to date ~ 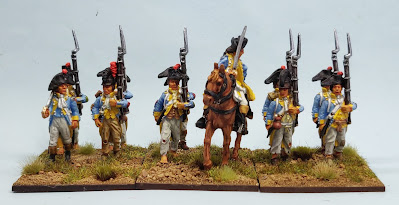 I continued with the light blue faced yellow scheme for them, which I'd previously used on Alphonse de Bykli and my French mercenary cavalry commander in Typoo Bhyka's army. The figures are mostly the ragged versions of Eureka's French Revolutionary infantry so I've tried to vary other colours on the figures where appropriate. When I've completed them I'll be sure to feature them in another blog post, only half way through for now though! 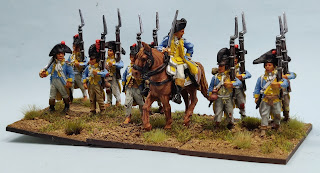 That will bring me to the last planned unit in my original purchases, being 9 Tribal Cavalry from Perry Miniatures' Victoria's Little Wars range. Once they are completed I will be due a rest from the sub continent and will be delving into the Lead Pimple for something different for a break!