I've managed to finish the final four figures for Lord Walton's Foote ~ see the previous two posts for more on them. I've also completed the 'furnishing' and re-roofing for the Undertaker's building in New Paddock City.

As I'm sure you'll recall, the building is from the wonderful Battle Flag range.

While the 'furnishings are from Frontline's growing resin range. Here we can see into the area I decided would be the workshop, enhanced by some Foundry Old West figures.

While in the main part of the building mourners can pay their respects to their 'dear departed' ~ three Dixon Miniatures' figures in this case, glimpsed through the door.

Or in this alternate bird's eye view.
I've also completed the build of the photographer's, also from Battle Flag, although to date I've only got some bedroom furnishings for the upper floor.


﻿
That only leaves the very large hotel to build, which I'll probably attempt in December, as I want to complete a fourth ECW Foote unit first, Robinson's Whitecoats, a Royalist unit for Phil to command I hope in our 2013 games.
It's been a difficult seven weeks since the knee replacement, but at last I can sit for a decent period of time to paint, though not as often as I'd like. Still, KBO, as Winston would say...﻿
Posted by David at 05:44 2 comments:

I've made some progress with my latest ECW unit of Perry Miniatures, a Parliamentary unit designated as Lord Walton's Foote. I've completed the pike block now and one of the sleeves of shotte { the second sleeve has four figures still to finish off.} A few snaps, taken on my camera phone.

I've also embarked on my latest rebasing madness: this time my two Foundry War of 1812 armies, again using the MDF bases from Foundry and from Warbases. More of that next month. In the meantime, I have those four musketeers to complete first...﻿
Posted by David at 12:14 3 comments: 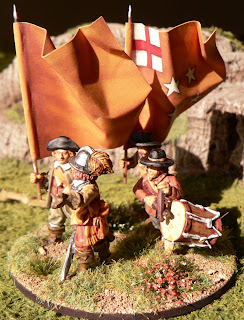 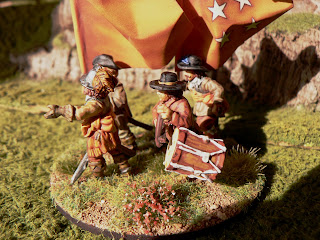 Painting in short bursts, I've managed to finish the two Mutton Chop 'Carry On...' characters. I plan to include them in our 1940's Operation Sealion/Blandings Castle games in the coming months. Here they are, Sid and Charles ~

I've also painted the free figure from last month's Other Partizan show, some sort of armed monk I believe. A crude and somewhat overlarge figure, not a patch on the figures from the last several shows in my honest opinion. He'll be deployed in 1940 too, the Hermit of Blandings Forest perhaps.