My Bolt Action Burma 1944 project has almost reached tipping point, with more figures painted than in the lead pimple awaiting attention. I thought there might be some interest in seeing what I've completed this month, so here goes ~
﻿﻿ 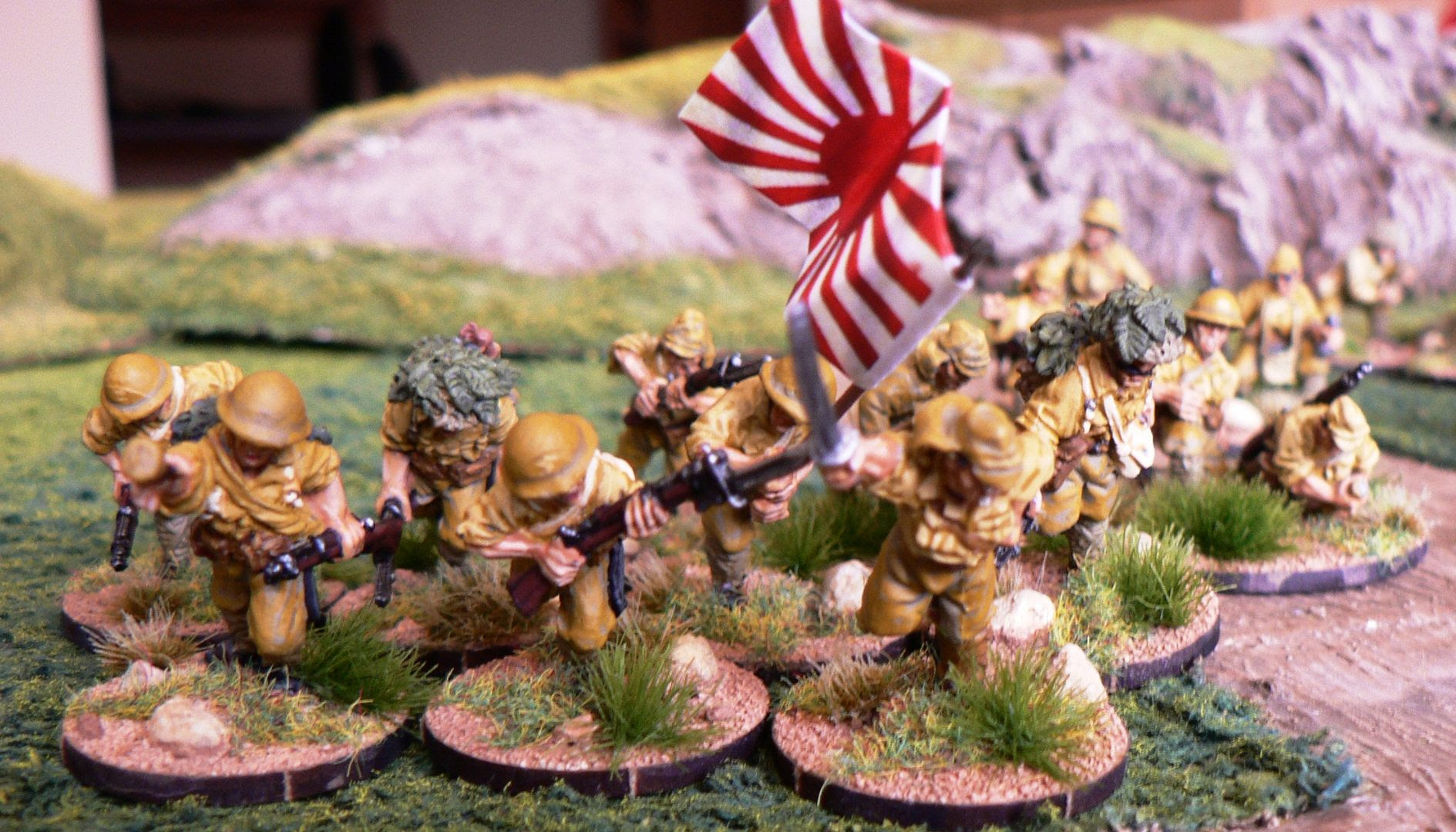 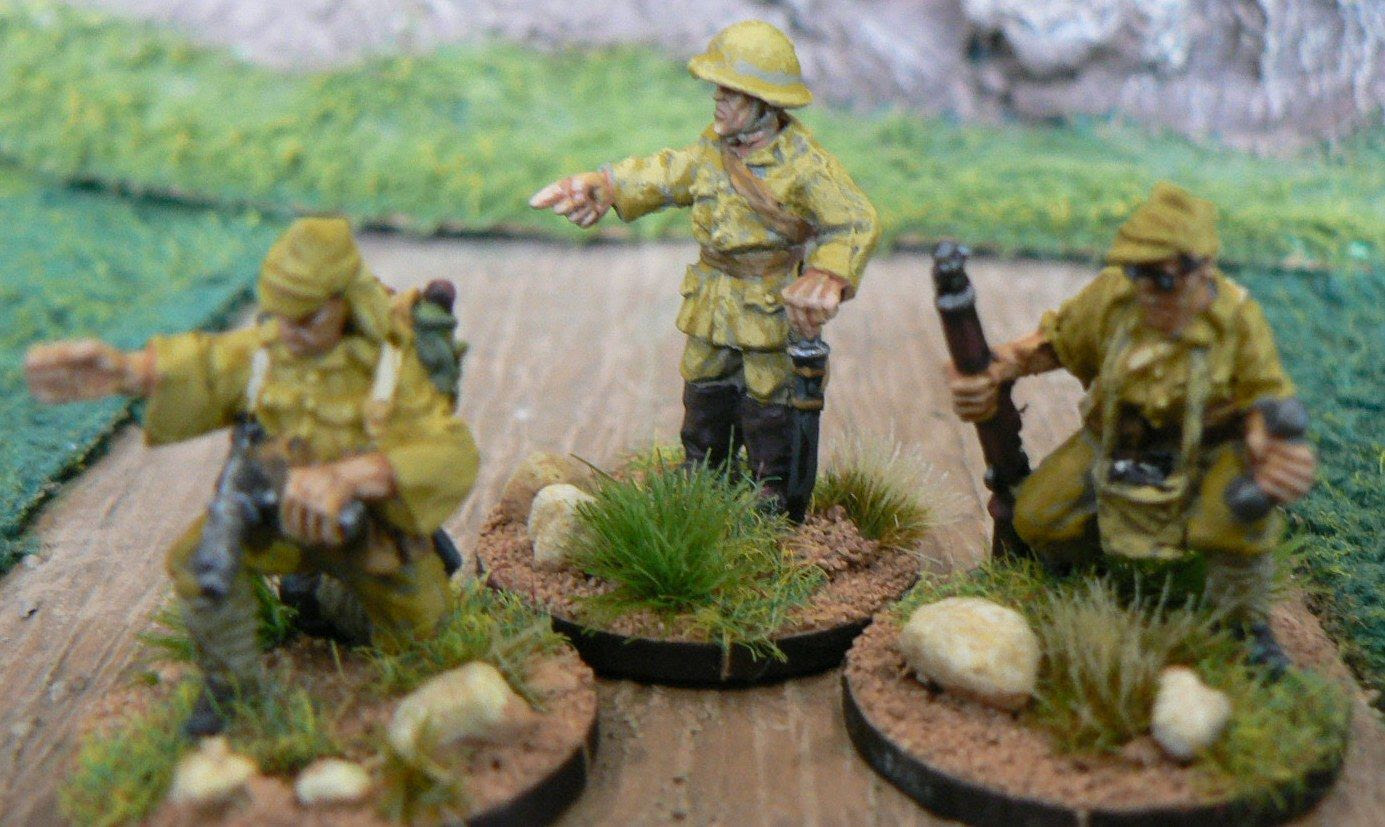 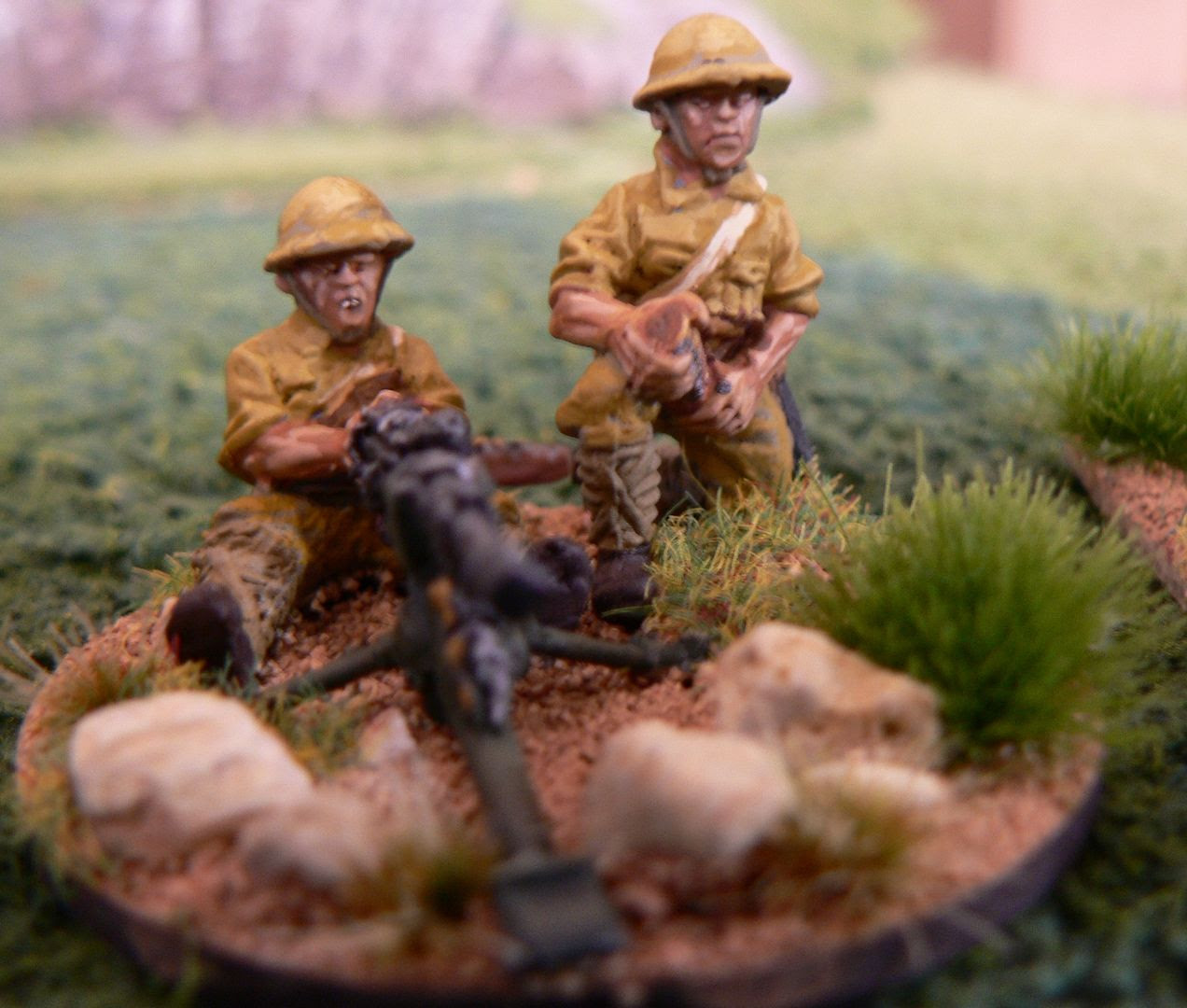 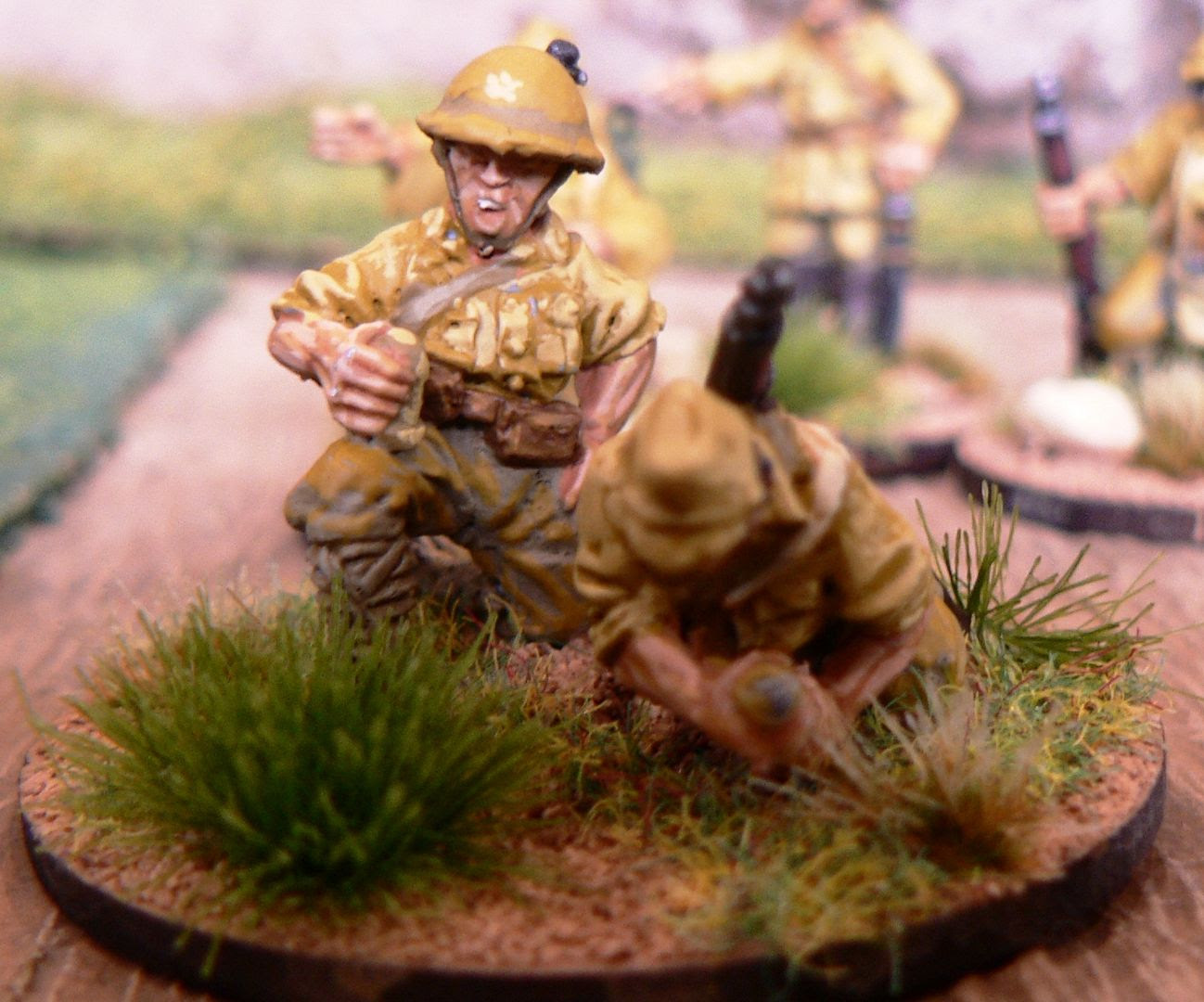 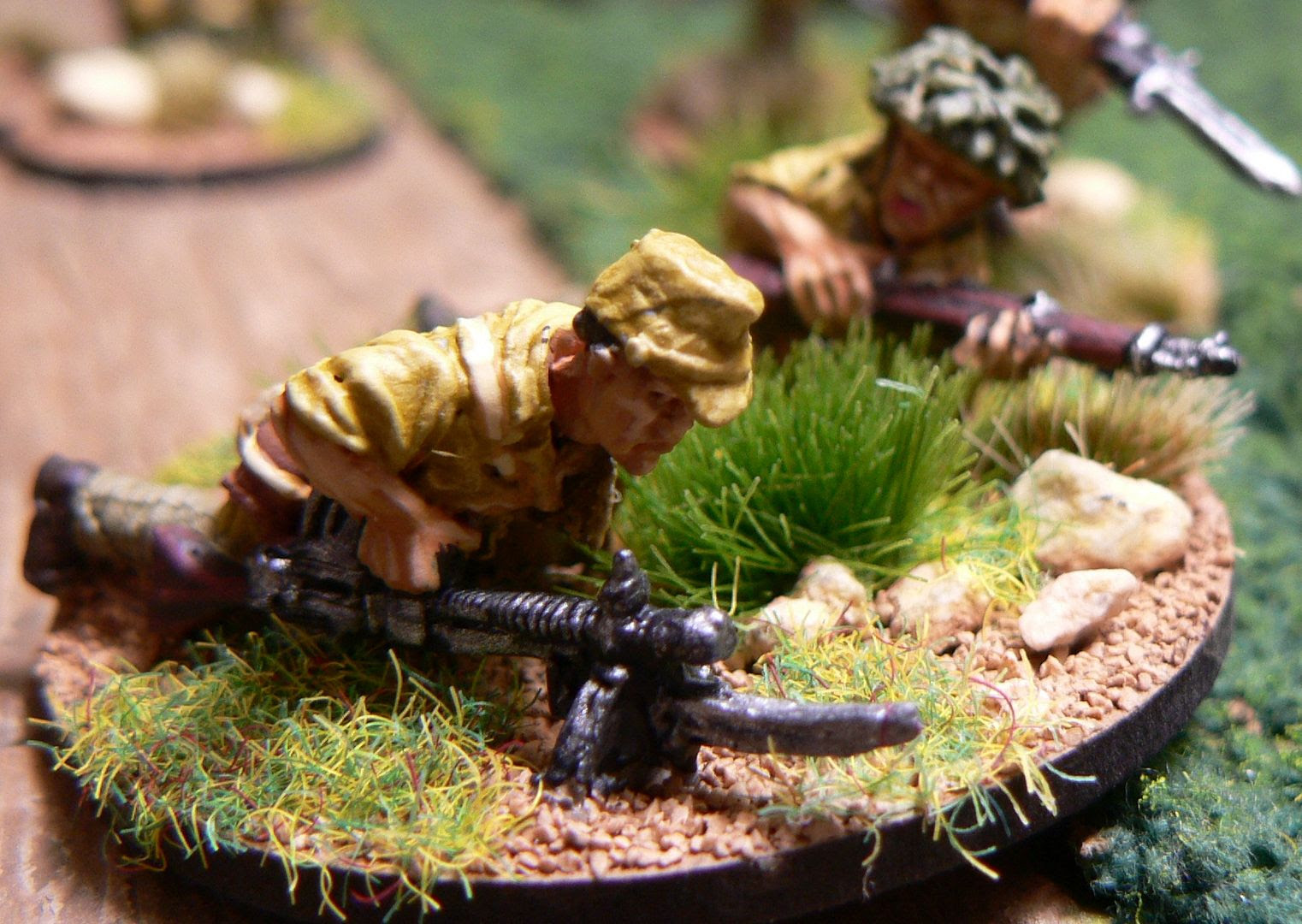 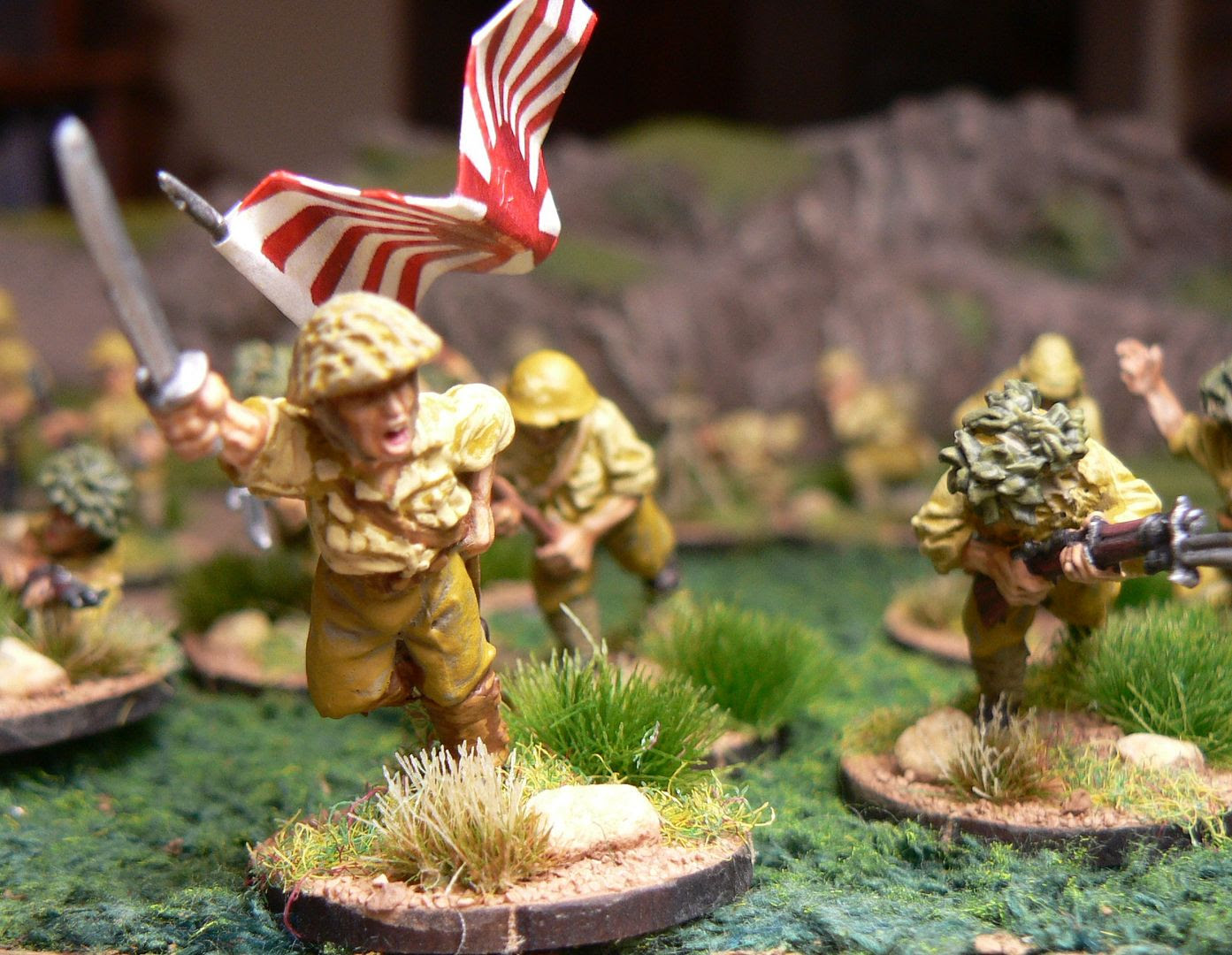 So far the figures are all from Warlord Games, many sculpted by my talented son Matt. I do have some figures from Brigade Games to add yet: namely the infantry gun and crew stripped for action and the mule handlers ~ though the mules are from Tiger Miniatures.

For many of my generation, born not long after the war's end, the Japanese as a wargames force can be a difficult issue, raised as we were on tales of brutal treatment and degradation of PoWs and fed films such as Bridge on the River Kwai. In the past few years, as followers of my Blog may recall, I was able to visit Tokyo and Singapore for a few days, on my way home from trips to stay with friends in Adelaide. The kindness of folk in Tokyo impressed me greatly and in Singapore I made a visit to the museum and chapel at Changi prison and to the Battle Box in Fort Canning Park, from where the failed defence of Singapore was 'directed'. Strangely perhaps, these visits seem to have laid these particular doubts to rest, or perhaps its just the passage of time. Either way, I am enjoying painting figures for this project and may even finish the Japanese this time ~ having abandoned a similar Far Eastern project a decade ago! I'll keep you posted on that, but for now I have some real life issues to deal with, starting with my cousin Pauline's funeral on Friday, so I'll close for now.
Posted by David at 11:55 3 comments:

Despite the hiatus engendered by the flu, I find I've made more progress with my Burma 1944 armies for Bolt Action than I thought. So, without more ado, the British force so far ~

Its as well to remember that while this is only a game to us, it is only possible for us to indulge our hobby thanks to men of my father's generation,like my Uncle Arthur who served in Burma during WWII. They never spoke much about the war and their experiences but they are the real heroes it seems to me.
Posted by David at 07:51 7 comments:

...and post Salute Blues.
I have had the flu! Not the 'man flu' I hasten to add, but the Full Monty, in your face variety. As a result I've painted nothing for a fortnight! All the excellent progress I thought I had made on WWII in Burma has been knocked back. As pride always comes before a fall, I think the flu must have been sent to remind me not to count my chickens...
As a result, I did n't know if I would make it to Salute or not. In the end on the Thursday evening Phil found cheap accommodation at a Travelodge near the Excel centre, so we did go, Phil kindly driving us all down on Friday evening.
I look forward with very mixed emotions to Salute every year: I look forward to seeing and buying new toys but at the same time I really loathe the venue. It has no soul and everything is swallowed up in the black hole that is the hall its lodged in. Its also, like Partizan in its own way, miles from anywhere else interesting, so really you either stay all day or you look, buy and go home. There are too many people there; the queues are too long to get in; its often hard to talk to folk for the noise; the seating areas are primitive and the food offerings in the concourse are dreadful! I really think I should not go, but there I was sitting at a table in the concourse eating breakfast while watching the entry queue disappear around the next corner out of sight. It certainly seems a waste of time being there for 10.00 a.m. if they can't get folk in any quicker. Perhaps dispensing with the bag and associated junk might speed it up beyond the glacial! Salute seems in danger of becoming a victim of its own success. As it was, having bought the pre-entry tickets, we just walked in when we felt ready, unaware that even pre-entry folk were still being asked to queue! Oops!
Having got in I headed first for the chaps and chapesses I'd preordered stuff from: some Old West figures from Dixon; some ACW Generals from Redoubt (Matt has made me some heads in my likeness); General Buller from Empress for the AZW; a third Chindit squad from Warlord; and from Oshiro several of their excellent Victorian terraces, shops and a small factory, intended for use in our pulp Holmes games allied to the existing dockside and cemetery tiles. I was so taken by these I ordered another two later in the afternoon.
With my purchases safely ensconced in the car boot ~ cheers Phil! ~ I was then at leisure to wander the event, look at the games, browse the trade stands and meet and chat to friends from round and about. There were some very nice games on show, all looking lost in the vastness of the venue I think. I liked the WI Little Round Top game: having umpired  a game played on it earlier in the year and written it up for the current WI it was nice to see both halves of the TM Terrain boards united for the display. The other ACW games left me sadly under enthused I have to say. All perfectly fine I'm sure in a more sympathetic venue. For me the highlight was the Mars VSF game. I'd been following its development over on LAF and was very much looking forward to seeing it in the round. I was n't disappointed: for me it was THE game of the show beyond a doubt. 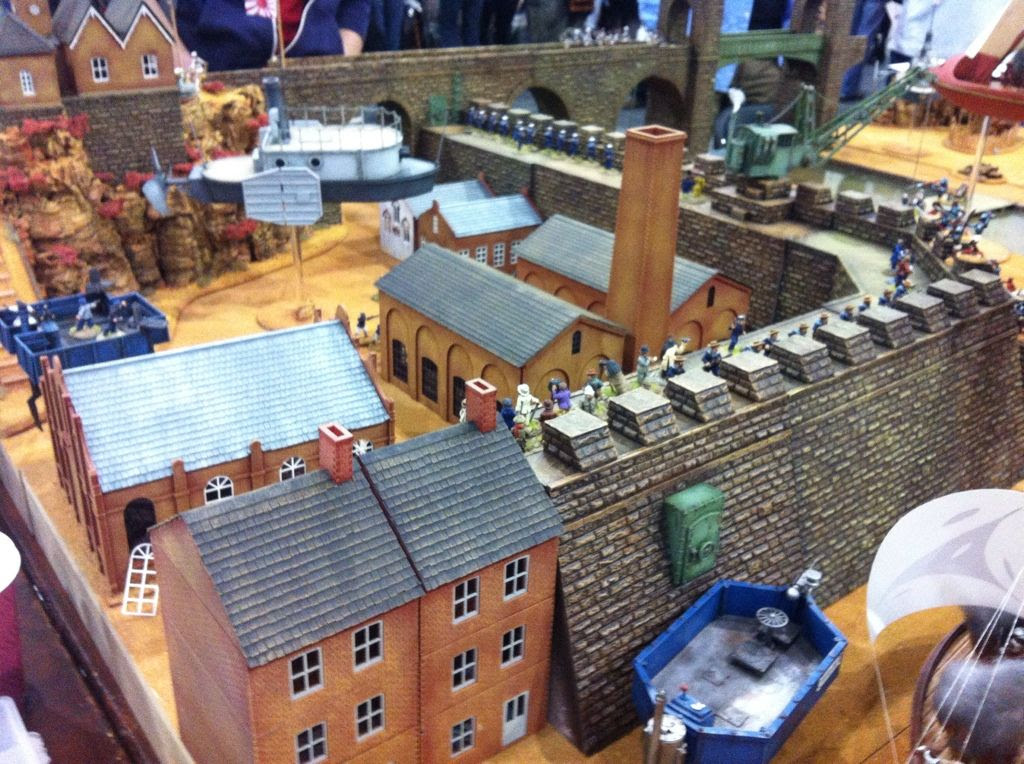 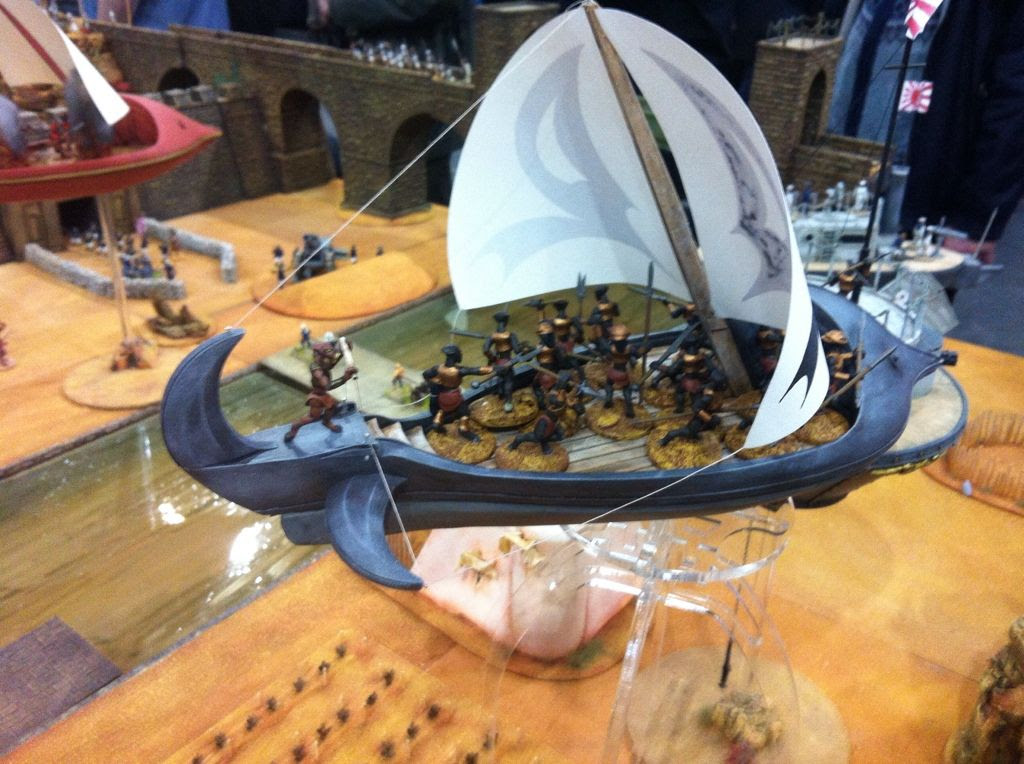 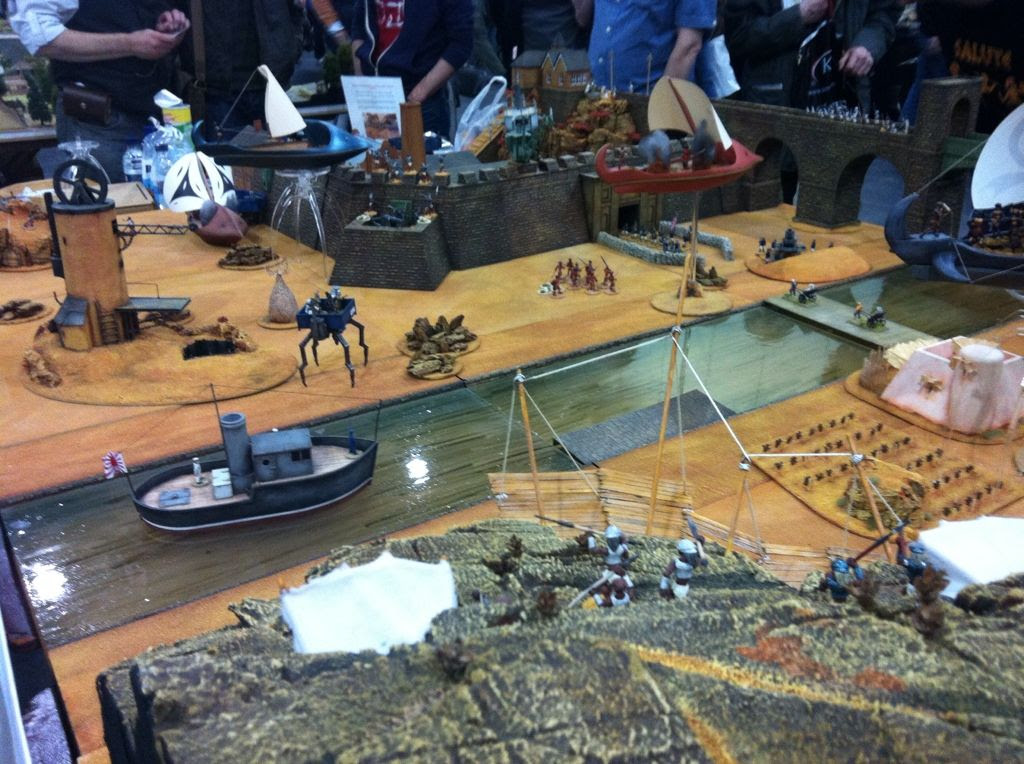 I hope these poor camera phone images will give a taste of a really marvellous and utterly barmy effort! There were, of course, many other fine games which folk with a different perspective to mine and having different interests would probably have chosen in preference to this, but its very much a case of speak as you find for me in this matter.
I enjoyed chatting with Nick and James from Boot Hill and Oshiro respectively; Richard, or Captain Blood, who despite selling his soul to the Dark Side of plastic figures is a first class chap!; Sean from The Bunker; Colin from Rapid Fire!/Valiant ~ thanks for the Normandy Battlegroups book Colin!: Duncan on his Trent Miniatures stand and Dan on the WI stand, who kindly gave me a Chamberlain figure.
Now I have to say that by the mid afternoon I was pretty much played out, a combination of the post flu weakness and the old knee replacement taking their toll. I sat for a while watching the world go by, made the odd sortie back to Mars and Pennsylvania, but did n't buy anything else. I did try to buy a bridge from Sarissa's new Oriental range but they had just sold the last one! Oh well, perhaps James will produce one for me. If not, I can get one later in the year.
So Salute passes by for another year. Bought some toys, met some pals, saw some nice games and arrived home late in the evening ~ thanks for closing the M6 who ever you are and adding an hour to my trip. Telford must be turning in his grave at the jokers responsible for building and maintaining roads today! Now I'll close by saying that I have cleaned up, spayed and based some of my new toys but I have n't touched a paint brush yet. Post Salute Blues ~ gets me every year! Perhaps I really should n't go you know...
Posted by David at 05:17 4 comments:

A Carry On Up the Jungle...

It seems that Photobucket has relented and allowed me to upload the new pictures I promised in yesterday's Blog post! Well, Hoo-bl**dy-Rah! Without more ado, the Chindit figures ~ 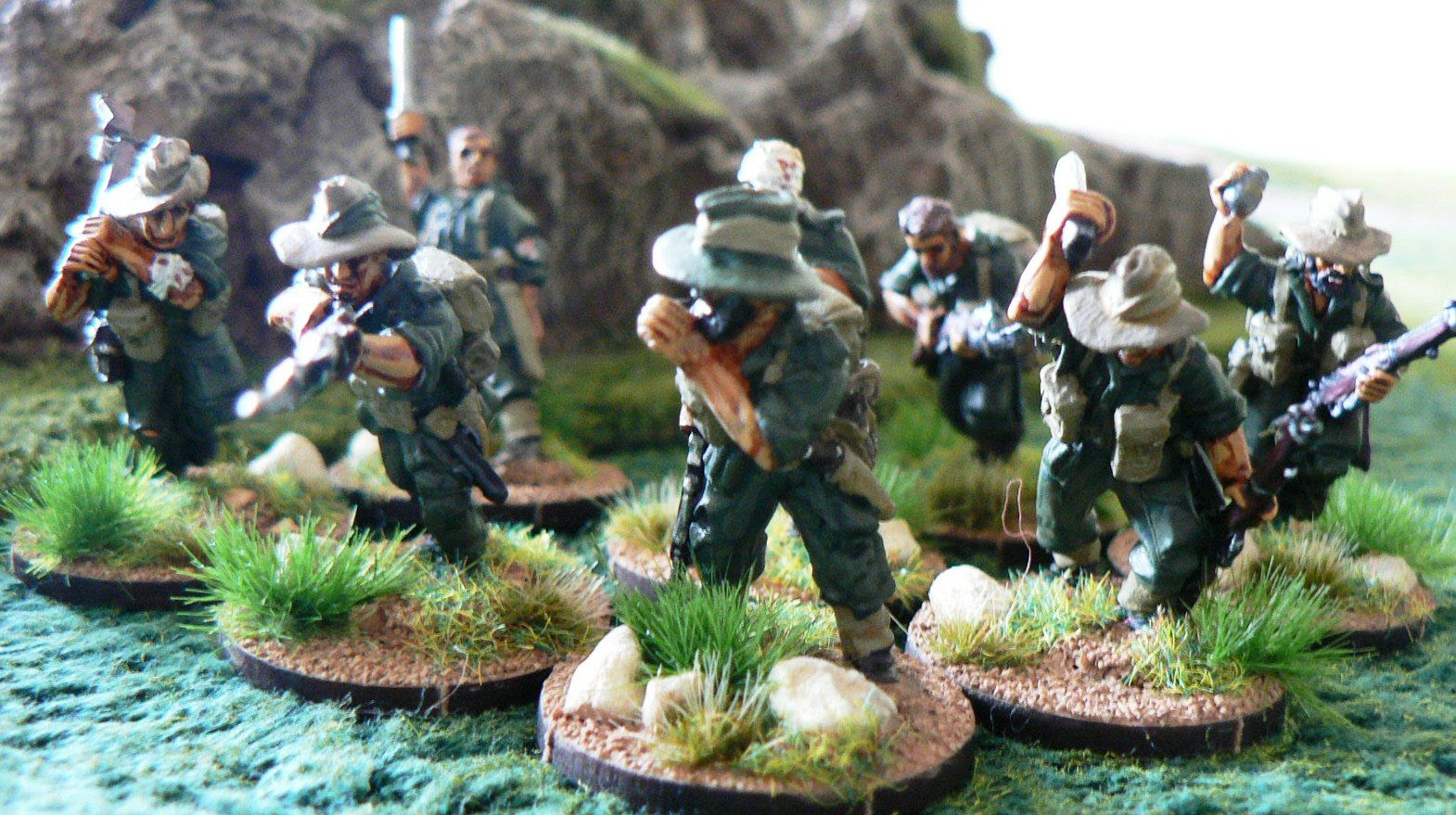 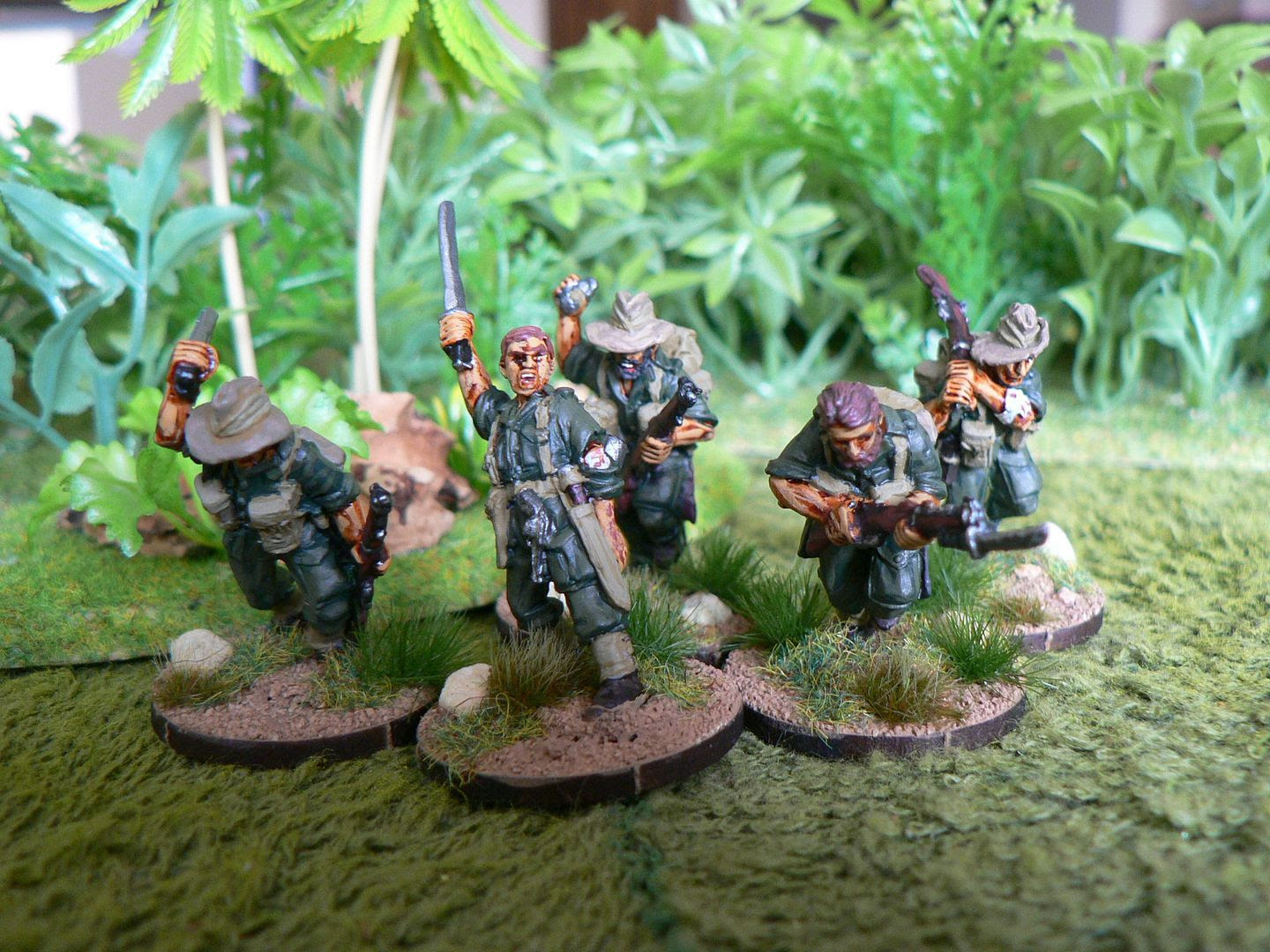 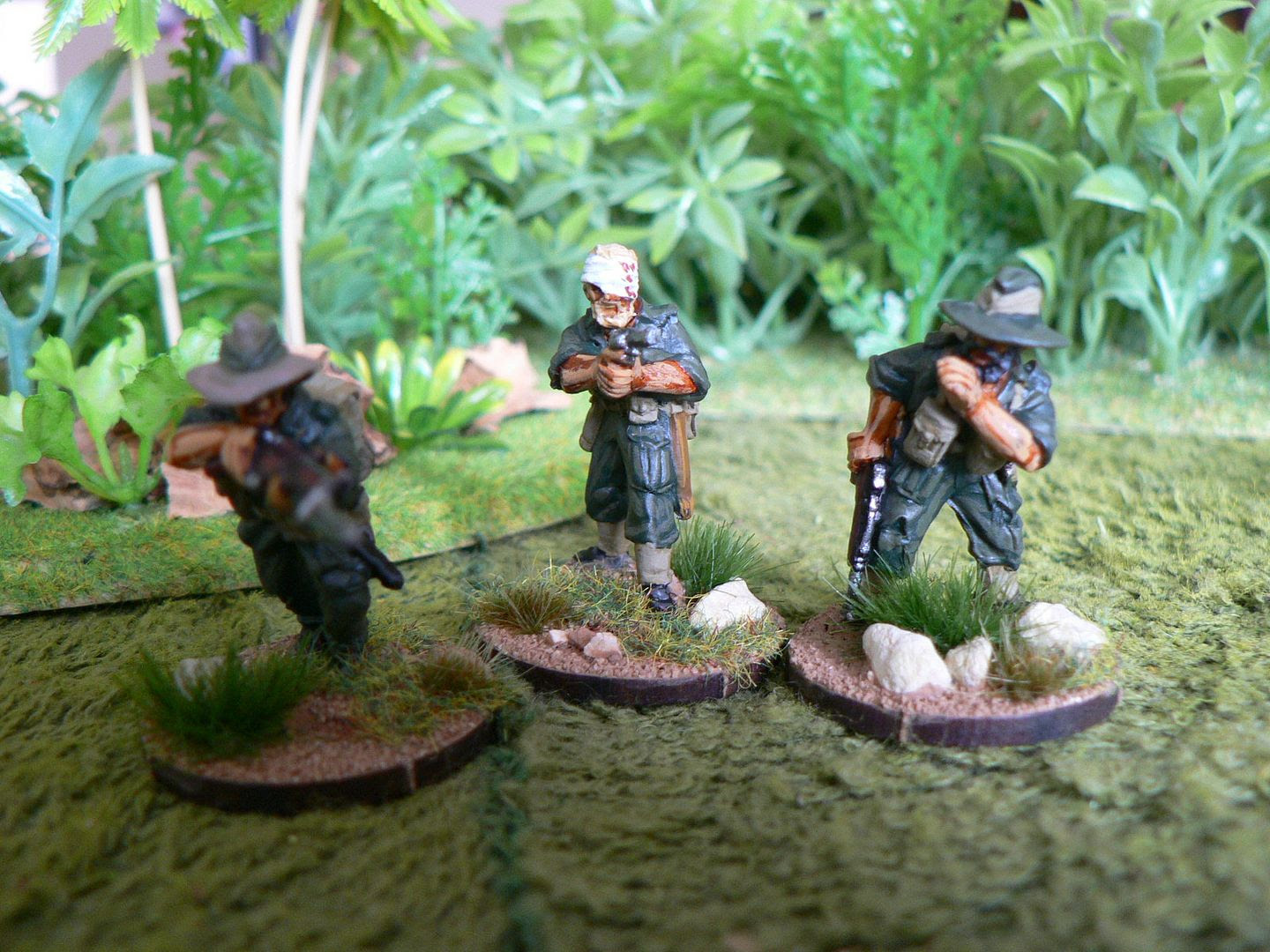 Another shot of the Japanese sniper figure 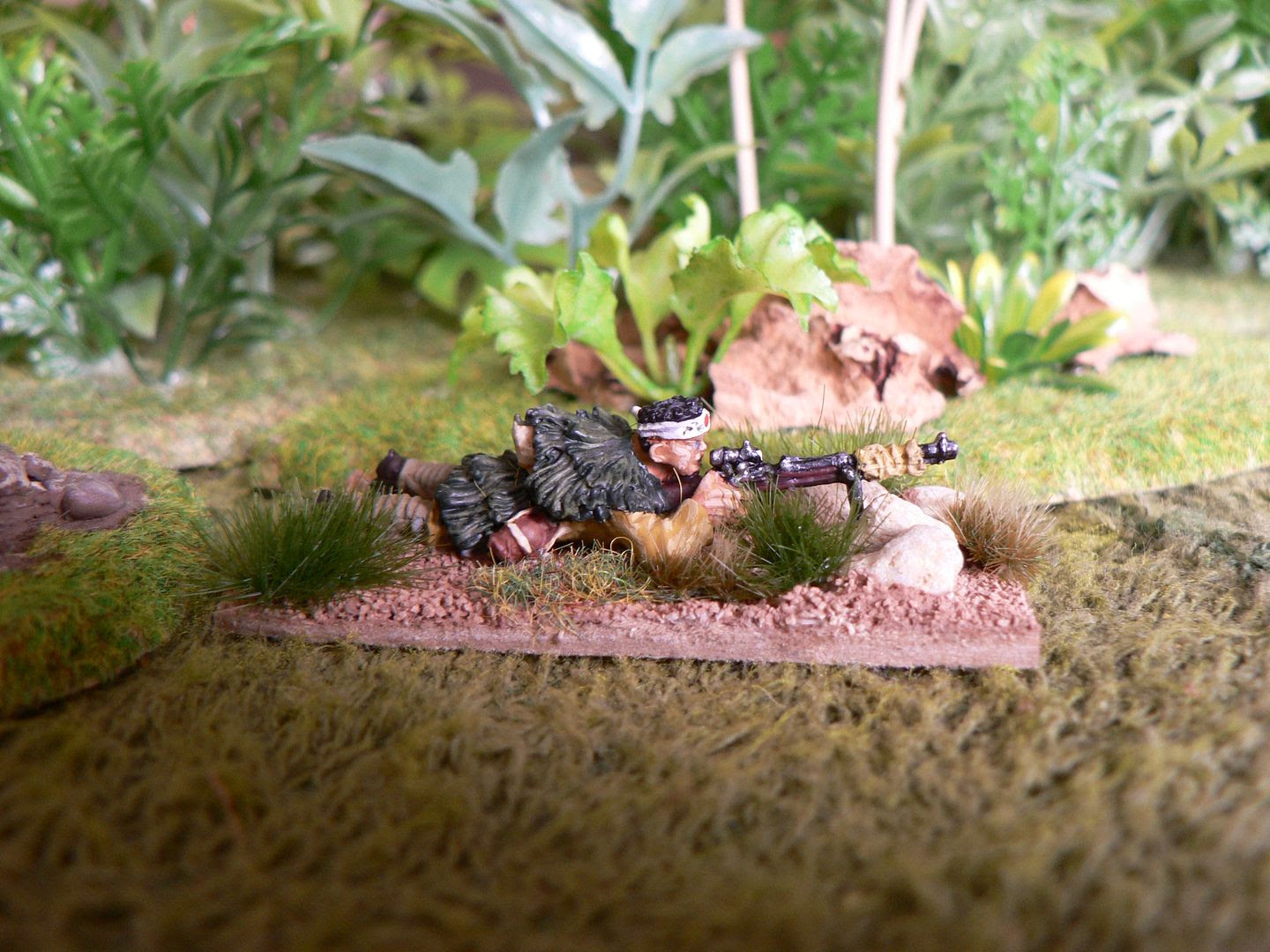 ...to Burma during WWII. The second of my small projects in my self styled 'Year of Being Japanese' is underway. Having finally finished the six Perry Samurai Phil passed on to me, it was time to get started on the 1940's version. We shall be playing small actions using Bolt Action rules. I've chosen mostly Warlord Games Japanese, which my son Matt sculpted in the main, supported by a selection of Brigade Games figures to flesh out the project. For the British I'm using Warlord again, mainly from the Chindit range. So far I've completed sixteen figures: eight for each side.


I used a fairly simple colour scheme for the Japanese: boots brown or black depending on type; puttees Khaki Grey, highlighted Khaki; trouser Khaki, highlighted Japanese Uniform: shirt Japanese Uniform, highlighted with an ivory mix into Japanese Uniform. The figure goes from dark to light as you move up. I think its worked well myself. The bases are railway ballast washed with Country Maple, with the usual static grass and clumps added.
I've used a similar method on the Chindit figures, which I hope is illustrated by the picture above. In the case of the flesh tones: for the Japanese I used the Foundry Oriental Flesh triad, for the British Valejo Medium Flesh, washed with old GW Flesh Wash and highlighted with Medium Flesh again. I'm trying to keep everything basic but tidy, satisfying the 'three feet rule' rather than the 'painting fascists' who threatened to highjack the hobby. In general terms the paints are a mixture of Foundry, Valejo and Craft Store cheapos!
Now, for some reason bl**dy Photobucket deleted all the other photos I took, so I'll need to reshoot the other figures tomorrow and post them later...
Posted by David at 15:34 1 comment: