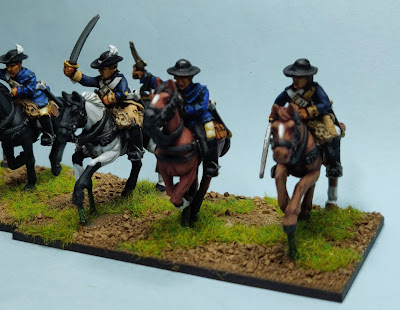 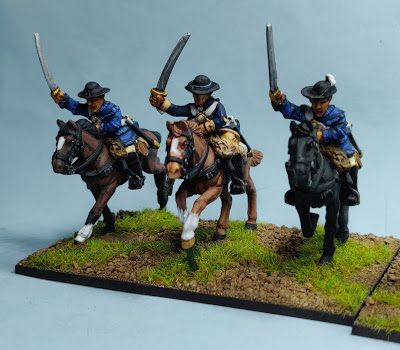 Hastatii for the Allied Italian Legion

"This is not the end...but it may be the beginning of the end." Seems an appropriate starting point as the Allied Italian Legion comprises the final part of this project, though of course being a wargamer that can hardly be taken to mean that it is finished, oh no! This element of the Legion will represent the Hastatii, the Velites already having been completed way back when I started on the project.

The figures are from Aventine Miniatures of course, with shield transfers from LBM and bases from Warbases as ever. Here's an idea of how they will look on the tabletop battlefield here in GHQ. 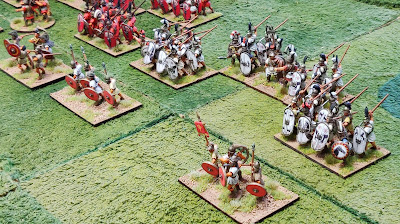 With these completed it leaves 52 figures to complete the project for now. I can't tell you how sick I am of bronze right now and how much I am looking forward to working on some C19th figures next year (DV) In the meantime, stay safe and take care of yourselves, your family and your friends. We don't want to loose anyone now do we?

When We Were Young...

I was 'volunteered' for a general sort out and tidying up of the drawers in our old master bedroom, the one we used before moving into the extension which had formerly housed GHQ. In one drawer I found some photographs of figures and games Phil and I had staged at wargames shows back in the 1990's. The photographs predate my digital age, so were a mixed bunch if I was being kind when describing them! Here are three I've salvaged of ACW Display Games, probably at either Partizan or at the long defunct Midland Militaire. 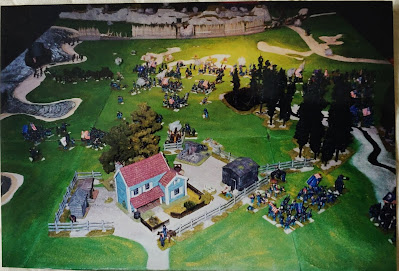 This general view is of a game representing the Federal attack on Fort Fisher, oft known as the 'Gibraltar of the South'. I'd visited the remains of Fort Fisher, near Wilmington NC, probably in 1995 and had been so impressed with it that I persuaded Phil it would make a grand Display Game. 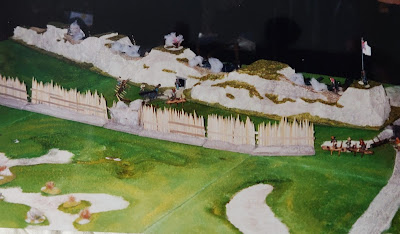 Phil probably built the representation of one face of the fort and I think the palisades were his too from his Darkest Africa collection. The forts guns were by Ral Partha, bought at one of the Historicons I'd attended around then.

The third photograph is of another ACW Display Game, the Siege of Petersburg, and was probably taken at Midland Militaire. Both games won awards at the show, once for best Display Game and once for Best Game in Show. Just shows how far standards have risen in the last 25 years! The sharp eyed will have noticed 'Rawnsley Farm', the blue house on the left in the last photo and front and centre in the first, which is still doing good service here in GHQ!
Well, they do say that nostalgia ain't what it used to be, but I found it strangely satisfying in these strange times we are passing through to spend a few minutes with these fond memories of happier, simpler times. Let's hope we can return to something like these when we emerge on the far side of all this pandemic malarchy... Stay safe and well, all of you.

As promised in an earlier post, the whole collection to date arrayed on the table here in GHQ. I started back in May, as you'll no doubt know if you are a regular visitor, with the first two bases of javelin armed levy made from the Velite packs in the Republican Roman Army deal then offered by Aventine Miniatures. Since then I've plodded on with the project whenever I've been able to reach this position. Anyway, see what you think ~ 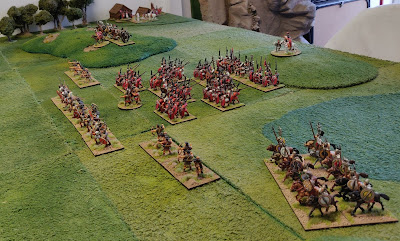 The city walls I believe are by Grand Manner, in heavy resin sadly, but I can't be certain on that as I bought them from the late Peter Bradford who I'd known from back in the day when Phil and I were organising WMMS. The villa ruin is a Jarvis foam piece, I think, which I picked up from a B&B at some local show or other. The temple ruin is an old Ian Weekley piece with columns from Coritanii. Trees are from The Last Valley and, of course, Phil made the baseboards for me.

The last base of Allied Italian cavalry for my Republican Romans has been completed, at last! I'm really no fan of painting cavalry, always seems to take far too long. I know I'm not the most patient of folk, nor the most prolific when wielding the brushes, it's just the way it feels to me. Putting all that to one side here are the results for scrutiny ~ 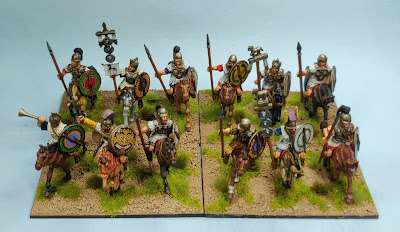 The figures are from Aventine Miniatures, with shield transfers from LBM and bases from Warbases as ever. As it stands now the project has 80 figures left to paint, forming the Allied Italian Legion. I do plan to add some light troops to this in due course, besides the oft mentioned Spanish cavalry, but funds are committed elsewhere at present in respect of some further AWI Continental Dragoons which Phil is painting for me.

Now that these are completed its time to lay everything out on the table in GHQ to get a first sense of the look of a game. Hopefully you should be able to share in that in a day or two's time... Meanwhile, as they say, it's back to the brushes and highlighting the first four Allied Italian Legionaries.

Those of you who actually read this blog will recall that I was diverted last month into a couple of terrain additions: a cotton field vignette, a small barn for N American games, and a small 4 figure vignette depicting the construction of the perimeter bank, ditch and palisade suggesting a Marching Camp for the Republican Romans. To complete the piece I had a further figure and three stands of pilum, helmet and scutum from the Crusader Miniatures pack of Romans in camp. In addition I also had two resin tents, cast from the Ian Weekley originals, via Magister Militum. Also to hand was a small fire which I think came with the Agema Miniatures haruspex set. After painting I arranged them on a 150x150mm terrain base from Warbases, applied my texture mix over PVA, washed it with Country Maple and finally applied static grass, clumps and tufts. I hope it will do... 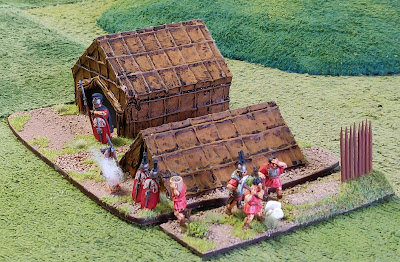 When I have completed the Allied Italian cavalry to support my Republican Romans I hope to lay the whole collection out on the table in GHQ, both to encourage my stalling painting mojo and to give any interested reader the sense of what the games might look like. As an aside, while I've not yet bought the projected Spanish cavalry for my Carthaginian army I did buy a book! 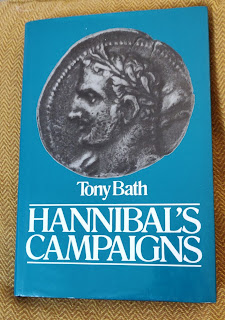 Almost forty years old, by publishing date on inside header page, and in perfect condition from World of Books and with free postage. A nice general read about the period, dated obviously in places, but I was pleased to add it to my small library.

Back to the Romans!

Rather, back to allies of the Republican Romans in the Punic Wars. In this instance the first of the Allied Italian cavalry. Now, those who have been following this particular thread on my blog from its beginning will recall how I struggled with the Aventine Miniatures Roman cavalry figures due to their multipart nature. Thankfully the Allied cavalry figures are less fiddly with fewer parts to deal with! So far I've completed six figures from the 12 I bought in one of the Unit Deals. 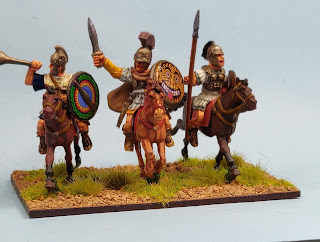 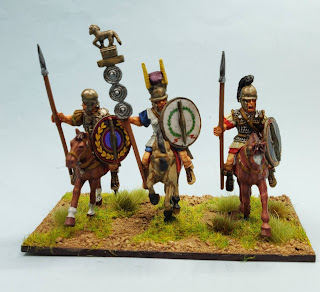 One criticism, and it's not really all that significant, is that on many of the figures you cannot fit the shield to the figure using the fist into the shield's rear recess. This is due to the figures' poses as they relate to the horses. The horses' heads might have been better sculpted looking off to their right to ensure the shields could be fitted more securely then. A minor irritant in the great scheme of things, but there you go. 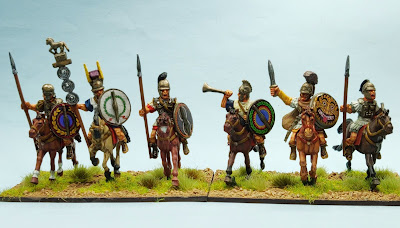 As ever, bases are from Warbases and the shield transfers from LBM. I've another three figures underway and the last three are fixed to the MDF hexes I use to hold them securely while I'm painting. Once these are completed it will leave the Allied Italian Legion to complete the project, for now at least: a mere 80 figures!

It seems that two, or possibly even three, years ago I bought several sets of figures from Eureka Miniatures, via a pre-order with Colin, when they were at Salute. Amongst these were the 'Ragged Continentals' cavalry figures. I'd seen them on Giles' Tarleton's Quarter blog and admired them so thought I'd add them to my AWI mix. Then I forgot about them, as you do.

With the ending of Lockdown Mk1 in the summer and the resumption of face-to-face games in GHQ Phil was able to remind me I'd passed the figures to him for painting (I'd forgotten that too!) and they had reached the head of his commission queue, so how did I want them? There are ten figures in a mix of coats and hunting shirts, but all with a campaign worn look, including floppy hats! I'd no ideas for them, so cue much research in books and on the net! Here's the first result, a four figure base representing the Baltimore Light Horse ~ 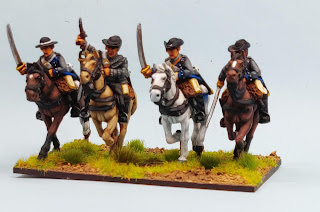 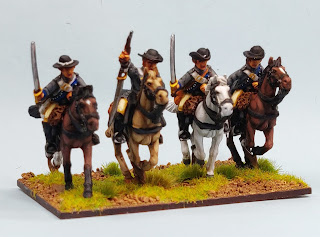 Phil has the remaining six figures well underway too, but with this dreary Lockdown Mk2 thrust upon us I don't anticipate seeing them much before Christmas! And on that note...

I should really be pressing on with painting my Allied Italian cavalry but somehow the motivation has lapsed since the end of October. I blame the diversion into ACW vignettes and buildings myself! Still, all is not lost as I have managed a little painting for the Punic Wars project in the form of the Crusader Miniatures Republican Roman marching camp set. I've used four of the five figures in this piece to suggest the perimeter of the marching camp. The earth bank is based on a strip of foam packaging and the stakes are toothpicks ( I cut them too long on reflection, but hey-ho, they're done now.) 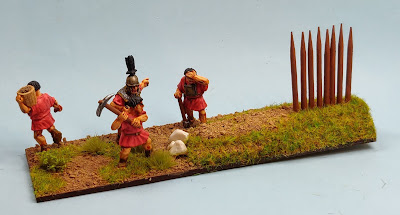 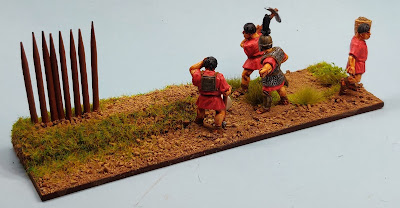 I have two tents from Magister Militum to base up to be behind this piece in suggesting the marching camp. I'm waiting for the large terrain bases I ordered from Warbases to finish the piece off. More later, as they say!