As I mentioned in the previous Blog post,Phil and I tackled a second F&IW game in our regular Monday meeting here in GHQ last week. Phil as Lord Rawnsley assumed command of the British force, keen to follow up its success under Lord Walton, while I had the task of rallying my defeated French force and halting the British advance. In this I was aided by being able to fall back towards Fort Decouragement to give my battered force a secure base at least. I also had the very faint hope for the timely arrival of my Paddoquoi Allies who had taken the previous defeat very badly.


Again Black Powder proved robust enough to deliver an excellent and gripping game going almost to the wire despite our tinkering with the parameters of unit sizes and the nature of command and control. It will be a while until we revisit the F&IW here in GHQ. I hope to add a few more figures this coming year, the usual riders to ambition being added of course. No games here in GHQ next week, as Phil is away on a tad of R&R and Jon is unavailable,but don't despair I have some finished units ready to show you next week. Now there's a treat to look forward to...or not.
Posted by David at 01:21 20 comments:

A while back now I featured some small bases utilizing surplus American figures from the War of 1812 ongoing expansion project. I use them to represent skirmishers and to populate buildings more readily than the larger rectangular or square bases. I've done a few now for the British regulars stationed in the Canadas at the outbreak of hostilities ~

These Foundry British flank company figures, sculpted by Aly Morrison back in the day, were left over from a bag of assorted figures I got from Colonel Bill's earlier in the year. As they say, "Waste not, want not!"
While on the subject of using up figures I've also been painting up some Foundry American Rifles. Rather than just paint them as more US Rifle Regiment figures I've created an entirely fictitious Volunteer Rifles unit with a totally made up name and uniform, the Lafayette Rifle Volunteers. I'm half way through them, so hope to complete the unit by the end of the month.
Posted by David at 03:59 14 comments:

Jon and I were trying out a few ideas for a French and Indian War game using my collection of Redoubt Enterprise figures and Black Powder 2, including the recent dedicated theatre supplement. The scenario sees a British attack on a small French settlement, Petit-St Mellon. Lord Walton assumed command of the British force sent to burn the French out and hopefully secure more Paddoquoi allies, while De Bykli assumed the mantle of French commander charged with the defence of the settlement ~


We both thoroughly enjoyed our game and felt that until very late on in proceedings it was very open as to which side might triumph. In the end my superb firing throws, sadly matched by Jon's equally good Saving throws, could not be repeated by my Morale saves. Four on the bounce failed at less than 4 each for my first four attempts! But then I find this the real beauty of Black Powder in action, the very unpredictability of events keeps the game alive until the last throw of the dice! Al being well with the sick and ailing on Monday Phil and I will be giving the rules another outing in the F&IW setting with a follow up scenario I'm busy devising this weekend.
Posted by David at 03:42 23 comments:

Foundry figures sculpted by Aly Morrison of course, the first of this type I’ve added to the Anglo-Canadian forces.These have been a bit of a struggle for me to be frank though as there proved to be no obvious short cuts to the finished look I wanted for them. In all they took a couple of weeks to finish to my satisfaction. The colour bearers come from the British infantry command pack and the officer from the pack of British officers and sergeants. The flags are by Flags or War and the bases from Warbases. I’m pleased by the final look of the unit, so I hope any visitors will be too ~ 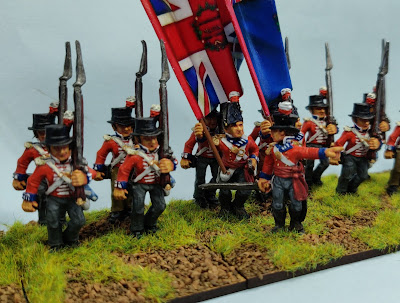 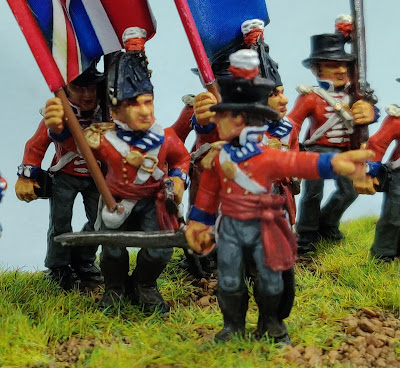 Next up are the bases of spare flank company figures to act as skirmish markers. Each of the three bases will be painted in the facing colours of one of the regular units serving in the Canadas at the time.
I’ve also taken the decision to have two extra regular units added to the army, again using the Foundry range. These are being painted for me by John Hill and I hope to be able to show you the both units sometime towards the end of the month, or early December at the latest. The first unit, the 1st Foot, the Royal Scots are already based and textured, awaiting static grass application and the flags fixing to the ensign figures. The second unit, the 100th Foot are even as I type under the brush.
Posted by David at 04:42 16 comments: