...Hay-On-Wye, second hand book capitol of Britain. As you can see I bought some books. Well, why wouldn't you when the price is right - unlike the rip off prices of some book sellers I could name at wargames shows. 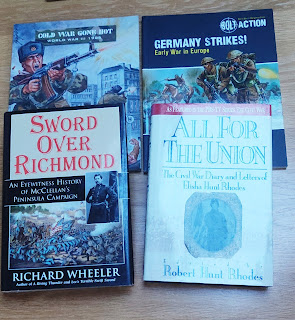 Two books on ACW themes, 'Sword Over Richmond', Wheeler's eye witness based account of the Peninsula Campaign,  and 'All For The Union', the personal diary of Elisha Hunt Rhodes. I find that books like this are invaluable sources of ideas for games in GHQ, and anyway I'm a sucker for diary and letters by folks who were actually there! Then a Bolt Action book, 'Germany Strikes', just for the scenario ideas as I'm no WWII buff - ask Phil! Finally 'Cold War Gone Hot' for ideas and scenarios for next year's project in 15mm, though we don't plan on using the associated rules.

All from one shop, the Hay Cinema Bookshop, and all for £22 and in 'as new' condition. Booksellers at wargames shows pleas note! Now we are off to Hereford, my first visit since 1968, and I was sick then anyway so it doesn't count!