The Italian Wars has not figured here in GHQ since January 2020, so Phil and I felt it was time to dust off our collections and let the little lead chappies see action once more. The resulting game, the Battle of Vastabelli, pits two Condottieri's armies against each other on the plains of northern Italy. We used our in house version of Neil Thomas's Late Medieval and Early Renaissance rules for the game, preferring them to Pike & Shotte for the period/theatre. As usual I hope the pictures and text will carry the interested visitor right into the heart of the action ~ 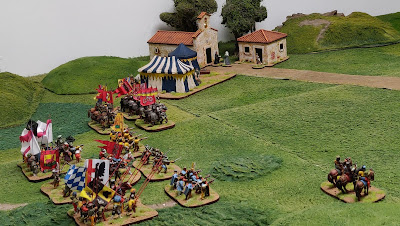 The army of Davide Bicclioni in the service of Pope Alexander VI, otherwise Rodrigo Borgia. 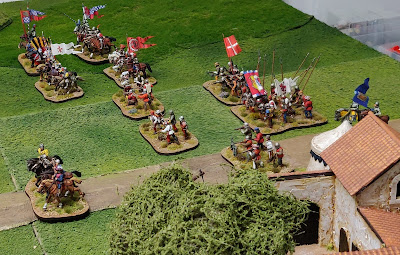 The army of Filippo di Rawnsli in the service of Florence

The army of Bicclioni takes the initiative and the Elmetti advance steadily on the left flank of the army. 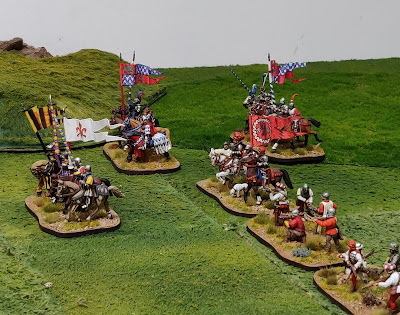 Di Rawnsli's army responds, the Gendarmes on the right flank manoeuvre forward supported by units of crossbowmen and handgunners.

Di Rawnsli's army viewed from Bicclioni's position. Both armies have mounted crossbowmen on their flank and are blessed with multiple units of Shotte. 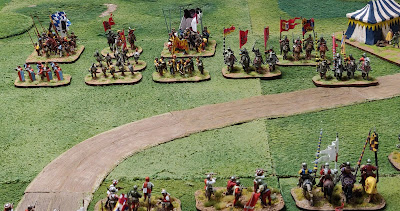 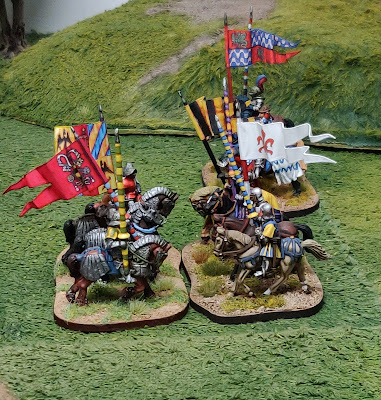 After careful manoeuvre by both sides at last the heavily plated Gendarmes clash. Lances splinter, steel rings on steel, but neither side gives ground. The fighting is desperate and bloody! 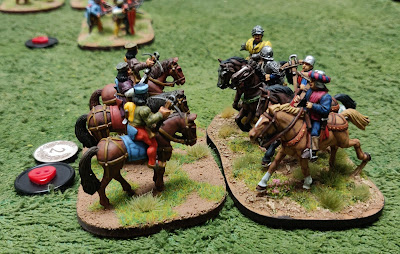 After trading bolts with their opposite number Bicclioni's mounted crossbowmen can stand no longer and charge forward to fight in hand to hand combat. Already reduced by 50% losses it can only surely postpone their inevitable demise.

As the foot soldiers of both sides edge cautiously forward, keen to avoid unnecessary bloodshed, the hand gunners and crossbowmen of both sides trade shots. Losses begin to accrue for both sides as they edge ever closer.

The clash of the heavily platted knights continues but losses are few, the Elmetti are holding their own despite being outnumbered.

Bicclioni's swordsmen rush forward and attack di Rawnsli's hand gunners, provoked by the galling fire they endured while advancing. They will show no mercy it seems now! 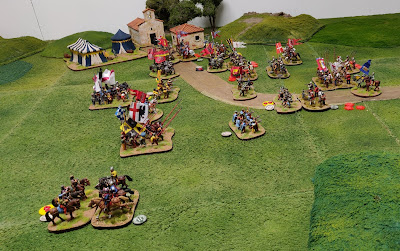 Fighting is still largely confined otherwise to the mounted units on both flanks. Loss of his mounted crossbowmen on his right could prove costly for Bicclioni's fortunes. 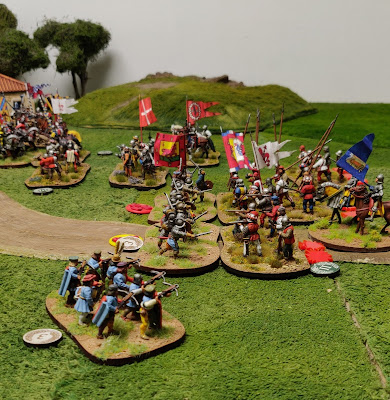 In the centre the foot soldiers are at last engaging in numbers, with Bicclioni's swordsmen gaining the upper hand.

Hand gunners and crossbowmen exchange shots while in the distance di Rawnsli's Gendarmes begin to make their numbers count and Bicclioni's Elmetti are being pushed back. They do not falter though and fight on doggedly. 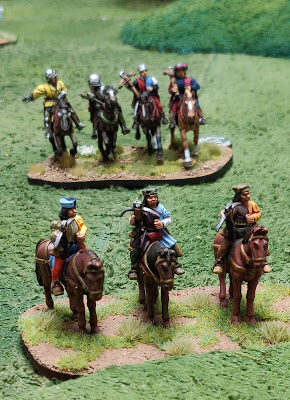 On his right flank Bicclioni's mounted crossbowmen are finally put to flight leaving di Rawnsli's to rampage behind the enemy's army making a nuisance of themselves.

Bicclioni's swordsmen destroy the hand gunners and supported by crossbowmen can burst into the centre of di Rawnsli's army.

The swordsmen engage di Rawnsli's sole unit of like and give it a mauling, driving the like block back in confusion with mounting losses. Bicclioni's pike are still coming forward in support, but too slowly it seems to swing the battle decisively.

The Gendarmes cannot break the Elmetti's fighting spirit, despite inflicting losses on them and pushing them back. The Elmetti sell their lives dearly and both side's casualties begin to mount.

As night falls the battle is undecided. Both Condottieri wish to preserve their army and so come to the mutual decision to withdraw from the field. The battlefield at Vastabelli is strewn with corpses and the groans of the wounded fill the air. All in a day's work for the mercenary Condottieri and their men...