...As they sped through the air! Thursday' s game here in GHQ moved to North America and the War of 1812-15, pitting General Watson's Anglo-Canadian army against Ol' Mere Marching Bykleigh and his rag tag army. The rules used were Black Powder 2, as I'm helping Paul feel his way through them {cut the smirking there, Robinson!} The opening positions ~

General Watson's Anglo-Canadian command facing the Americans has his right covered by Indian allies and the Glengarry Light Infantry, while his centre has a regular brigade and his rocket battery, leaving the left to be covered by a second smaller brigade of veterans and regular regiments together with a brigade of Canadian Militia.

The American's left flank brigade is trying to shake out into a decent defensive position, somewhat tardily in its execution of orders though as the rockets strike home!

In the centre and on the right the Americans just can't seem to get it together. Orders don't seem to reach their allotted units or be briskly carried out.

In the Anglo-Canadian centre the infantry shake out into firing lines covered by the skirmishers of the Canadian Voltigeurs.

On the Anglo-Canadian right the infantry are pressing onward threatening the American infantry who are in some Disorder due to being hit by the rocket salvo as they tried to deploy along the road.

In some disarray under constant rocket attack  the Americans are trying to shore up their centre and left while there is little sign of their Militia having any enthusiasm for joining the fight!

In the centre the Anglo-Canadian infantry are pressing the Americans hard while the American's artillery look anxiously for support from the reluctant Militia Brigade!

The American's left is in some disarray and the Anglo-Canadian infantry are pressing home their advantage, pouring fire into the unfortunate Americans. Those darned rockets are causing no end of disorder!

Another direct hit from the Royal Marines' rocket battery spreads even more Disorder amongst the Americans. One decisive push now and they would surely crumble? 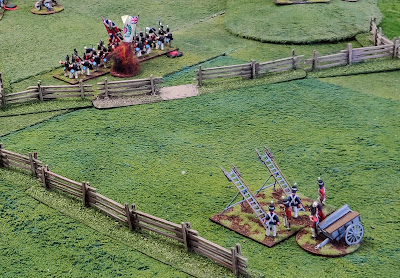 It seems I spoke too soon as a wayward rocket salvo smashes into the rear of an advancing Anglo-Canadian infantry unit. Fortunately there are no adjacent units to share their Disorder!

While the battle on their left is going badly for the Americans in the centre Ol' Mere Marching Bykleigh's men have got themselves into better shape. Their dander is well and truly up and the Anglo-Canadians are pushed back with one unit being routed!

At last General Watson's orders get through and the Anglo-Canadian Militia Brigade begins to move steadily forward to cover the retiring centre.

On the American left flank one heroic infantry regiment is holding the Anglo-Canadian attack at bay. Casualties are mounting slowly but surely, it can only be a matter of time it seems for them.

As the Anglo-Canadian Militia Brigade shakes out into firing lines the American Militia finally appear along the crest to their front. They pour fire into the approaching enemy and the attack seems to falter.

Suddenly things are looking much better for Ol' Mere Marching Bykleigh's men. An unexpected change of fortune seems to have flowed from the rocket's errant strike on friendly forces!

On the American left though the fight is much closer now. Another rocket salvo strikes home! If the left crumbles the whole army will be flanked rendering the successes in the centre and on the right meaningless.

Suddenly, and as is often the case in these games, fortunes collapse. The heroic American defense on their left sees the Anglo-Canadian attack collapse. General Watson sees his army is broken! Ol' Mere Marching has snatched a surprise victory from a seeming defeat! Dogged defense has carried the day allied to the eventual and timely arrival of his Militia. What a game!

Email ThisBlogThis!Share to TwitterShare to FacebookShare to Pinterest
Labels: Games, War of 1812-15