If you go down to the woods today...

...you might meet some French-Canadian Woodsmen! These two bases, each of three figures, are the last of this stage of my expansion for the F&IW collection, to facilitate games using Black Powder 2 as the rules set {in preference to the 'figure fiddling' sets we've flirted with previously}! It took me a while to work out how I had tackled the existing six figures, but in the end I got there! Memory certainly isn't my number one attribute lately when it comes to colour schemes at least! Anyway, no more on that! The figures are from Redoubt Enterprises again and will allow me to make up a Regular unit of four bases or two Small units of two bases depending on the scenario we are playing out. Here they are now for your assessment ~ 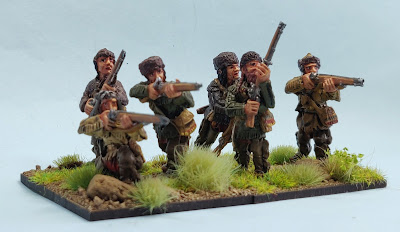 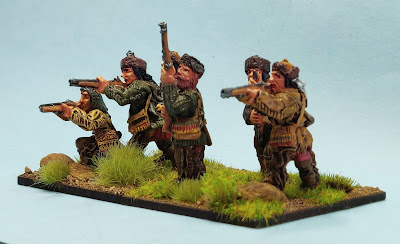 While I was working on these figures I'd also got two First Nations warriors firing muskets underway. Once again these figures were from Redoubt Enterprises and had come as an unexpected freebie with my first order, so I finished those off as well. Here they are for your inspection ~ 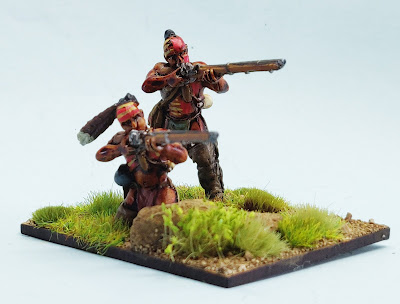 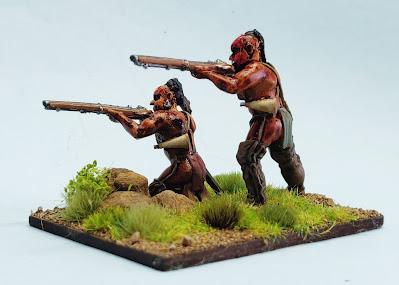 Although I said that this is the final stage of integration of new figures with old to make up units that's not entirely true. I have purchased Grenadiers for my two French Regular Infantry Regiments together with Grenadiers and Light Company figures for my two Regular British Infantry Regiments. While they will need to match their parent units I plan to use them as independent elements in the game. To that end the Grenadiers will be based on 80x50mm MDF bases of 6 figures to match the one I've already got in the collection, while the Light Company figures will be 3 figures to a standard 40x50mm MDF base, but with two bases per Regiment. That will give me again one Regular unit of four bases of two Small units each of two bases. The British Grenadiers are all cleaned up and spray undercoated white ready to start, once I finish the 3 Jesuit missionaries who have somehow worked their way onto the painting desk!

While all this is going on I have 144 15mm plaaaastic Cold War Gone Hot Russians to process! Then I have Lynx helicopters and Hind gunships to think about... Nothing new for '22 eh Phil?