Here are the elements of the B.A.O.R. I have  completed to date ~ 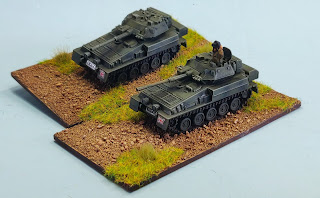 The Infantry elements of the force.

Two of the six FV432's to provide the transport for the Infantry elements, the Commander's on the left and the Milan Section's transport on the right. Four more are in process along with two further Chieftain MBTs to complete the force.
To recap and thus avoid any misunderstanding: Phil painted all the vehicles for the project, I painted the infantry, based everything and applied the transfers to the vehicles.
There remain 5 T72's and the Soviet infantry to paint in this initial stage, so no firm idea as yet when we might try a game beyond the second half of the year. In the meantime, aspects of the project appear in the new issue of Wargames Illustrated under its 'Quick Fire!' section heading.