Grenadiers of the 15th Foot

The second base of British Grenadiers as a part of my F&IW expansion project have marched across the painting desk and deployed into GHQ to await a drier day for varnishing. As with their compatriots from the 28th Foot they are from the venerable Redoubt Enterprises F&IW range. As with the other bases I've completed recently they are rather more liberally vegetated than is my norm, an attempt on my part to suggest the wilder nature over which the conflict was fought. Anyway, here they are for your consideration ~ 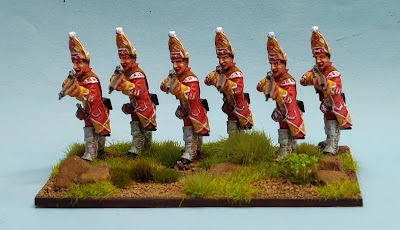 I have cleaned up and prepared for spray undercoating the next tranche of figures for this project in the form of two similarly sized bases of French Grenadiers, one in bearskin and one in tricorn for variety. I've also processed five bases of Compagnes Franche de la Marine in likewise fashion. Perhaps when the recent rains abate I can spray undercoat the lot? In the meantime I'm happily grass 'n tufting the bases of the B.A.O.R. and Soviet Union AFVs which Phil completed for me. Just the transfers to apply then. Just? I must be optimistic given the last effort!

My unusual post-Partizan burst of activity is down to Phil being away for a few days, so there was no game on Tuesday as a consequence. However Thursday sees a second visit to GHQ for a game by new Irregular Paul, so a game report may appear over the weekend!