Just a brief addition to the F& IW expansion project in the shape of a base of three French Jesuit missionaries ~ Father Philippe, Father Jean, and Father Paul. Figures are from Redoubt Enterprises and the base from Warbases, as ever. They will serve as an objective marker or a non player element in games as required ~ 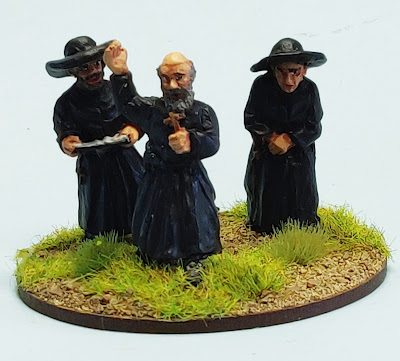 Black is far from the easiest of colours to work with, especially on large areas of clothing such as their clerical black attire! I've used the Foundry Triad of Equipment Black for what I hope is subtle highlighting. What the picture does confirm though is that I'm really nothing more than a journeyman painter! I find though that the highlighting will show rather more clearly after an application of varnish, which is awaiting a spell of rather less humid/wet weather than at present!! Next up for the project are a base of six British Grenadiers, an altogether more complex painting exercise than these three! Three Grenadiers completed so far, the other three under starter's orders!