The second of the French Regular Infantry Regiments, created using spare painted figures already in the collection together with new figures from Redoubt Enterprises, represents the second Battalion of the Languedoc Regiment. The flags are from the web resource Not By Appointment and in my opinion are fully the equal of commercially available versions. The bases are from Warbases, who else? Tufts from Great Escape Games and static grass from Jarvis via Phil. See what you think anyway ~ 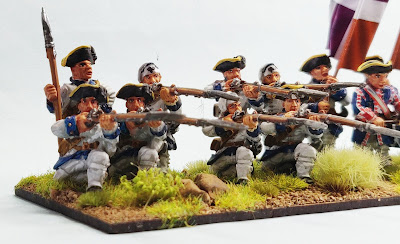 I hope the effort expended on this second attempt to merge the new with the old painting style meets with some degree of approval! I'm working on 6 French-Canadian Woodsmen now, using figures from Redoubt Enterprises again to match the 6 I've already got in the collection. They will completed the 'new merged with old' phase of the expansion. Beyond them lie entirely fresh figures and units to be added, including: Grenadiers for the two French Battalions and Grenadier and Light Companies for the two British Battalions; Compagnes Franches de la Marine; a large War Party of Stockbridge natives; and,  lastly, a base of French Jesuit missionaries! For a scenario objective if you are interested!

Of course this expansion of the French & Indian War collection in all probability won't stop there, I'm a wargamer after all! I like the look of the Galloping Major figures I've bought for the Stockbridge natives, so further acquisitions from that source of French-Canadian Militias and Provincials for the British are likely I'd say when funds allow, post Partizan expenditure on preordered terrain additions from The Last Valley! (Wooded stream sections and vineyard pieces for anyone interested.) In the meantime though, on with the French-Canadian Woodsmen! À Bientot Mes Amis!