There have been rumours reported of a French army crossing the border with the infant Republic at Drie Benen in the Low Countries. The Austrian commander has swiftly despatched a motley force to observe and, if possible, hold off the gathering French Army of the North while he hastily gathers his army to march to the sound of the guns...

The French Army of the North crosses the border near Drive Benen and advances to secure the junction of two major highways, aiming to disrupt the conjunction of dispersed Allied armies.

French artillery deploys early in the manoeuvres of the Army to cover the advance of the Demi Brigades and threaten the Allied Light Cavalry to their front. 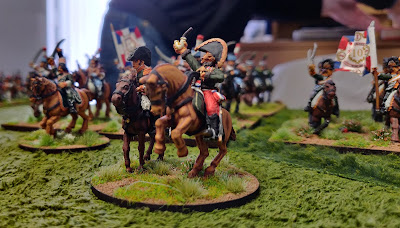 In the Allied centre Hanoverian Line Infantry advance cautiously covered by Hanoverian Light Infantry and a unit of Grenz. They face formidable odds in the enemy's Demi Brigades.

The Allied Light Cavalry, tasked with shielding the centre from their French opposite number comprise a motley assembly of Volunteer units. 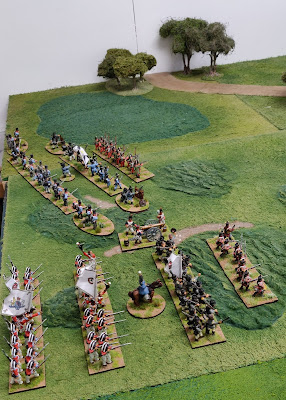 The Allied Centre and Left advance cautiously, aware that their fellows are not expected on the field of battle for a good while. They will be hard pushed to hold on!

The French Demi Brigades begin their advance covered by a cloud of Skirmishers. You can just see the beginnings of the fight for the graveyard in the distance as Austrian Irregulars occupy the feature.

The Grenz move confidently to fill a developing gap between the Allied centre and left before French Light Infantry can take advantage. 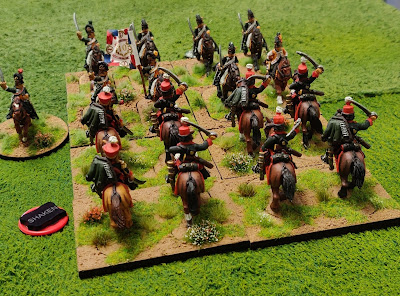 The first cavalry melee on the right between French 10th Chasseurs and the Hompesch Hussars results in a victory for French sabres! 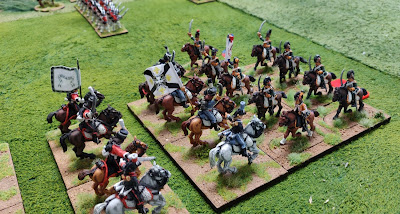 In a Sweeping Advance the 10th Chasseurs engage the Damas Legion's Hussars and defeat them before retiring on their compatriots. 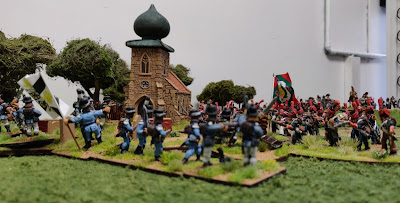 The fighting for the graveyard intensifies. The Damas Legion's infantry hold off the French Lights but cannot shake their morale!

Neither side can bring up supports to tip the balance, so a prolonged firefight develops almost as an aside from the battle raging around them.

The 4th Demi Brigade smashes into the Hanoverian Lines! Murderous fire damages but does not quell the French elàn and they charge home at the point of the bayonet!

The fighting is fierce and bloody but the Hanoverians seem to be holding their ground!

The 4th Demi Brigade is Broken but at a heavy price, with one Hanoverian Line Battalion retiring Shaken!

In route the 4th Demi Brigade flees towards the rear! Can they be rallied? (House Rule)

At last the first elements of the Austrian Light Cavalry reach Drie Benen and thunder down on the enemy Light infantry holding the junction. {At least they would have had they not been Disordered by fire from a third French Light Infantry Regiment in the woods on their right.}

The 10th Demi Brigade passes through the rallying 4th and hits the Hanoverian line. The line is not shattered, although a second Line Battalion retires Shaken. The Light Infantry continue the fight alone...

Suddenly the Hanoverians' morale collapses and the entire Brigade retires! The Allied cavalry refuses to move and the field is suddenly the French's!

The Broken Hanoverian Brigade retires from the fight leaving their artillery to the enemy! A loss of guns a cause of shame despite the best efforts of O'Donels Frei-Korps.

In a gallant but doomed attempt to snatch victory from defeat the newly arrived Austrian Hussars charge the French Light Infantry holding the road junction at Drie Benen. They fail to charge home, discouraged by withering fire from their front and left flank!
It's all over for the Allies in Turn 10 despite an heroic effort. That reserves did not march to the sound of the guns in a timely manner certainly hampered their cause. In the end it was just too much to expect of them faced with French elàn and espirité de corps...