I sometimes describe myself as a geriatric-in-waiting wargamer and have been knocking around in our wonderful hobby for not long shy of 50 years so it's quite possible that some of what I want to say about buildings in a wargames setting will seem strange to younger readers. A bit of context will help I trust. Back in the mists of time when I first joined Alumwell Wargames Society (1973?) most games were with 25mm figures and buildings were either simple scratch builds, Airfix railway buildings - thatched cottage, country inn, parish church mostly - or Superquick cardboard railway modellers' kits. In most games therefore buildings were representational rather than historic. Though one thing remains true down the years: if you put buildings (or woods) on a tabletop battlefield then wargamers will fill it with troops!

Things move on, they do not remain unchanging, and so firms like Hovels and Grand Manner pop up with buildings in resin, buildings which claim to be depictions of period buildings whatever your chosen period. Then comes MDF kit buildings and now the beginnings of 3D Printer files. All of these riches are available at a price to grace your games but one thing continues to irk me, and that is the vexed question of the size/scale of the buildings we deploy. My early Napoleonic games would feature the Airfix and Superquick buildings, but by the time I ventured into 15mm ACW games I was able to buy some bespoke items sold by Hovels. When I sold my 15mm armies on I kept the buildings for my growing 25mm ACW armies. To me the smaller footprint was what I wanted.

This of course leads directly to the issue of scales/sizes in wargaming. There are four distinct variables, all seemingly accepted without question despite then being mutually contradictory. They are:

You only need to look at pictures on this blog to see hills which are lower than buildings for example. Then there is the question of 'When is a building a building or is it representational of a complex of buildings?' - look at any farm or factory and you'll see what I mean. So wargamers will ask of course, 'How many figures can a building hold (see my early point)?' One answer might be to fix buildings onto larger bases and then the number of bases is simply those that physically fit one or more faces. This of course then portrays a single model as a complex of buildings. A simple solution but not very picturesque. Some rulesets accommodate this by restricting the number of shooting dice per face of building. 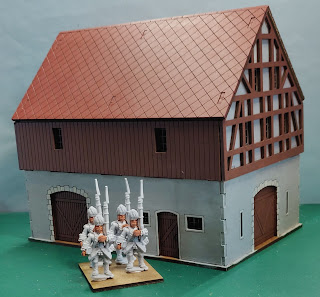 All of this has surfaced here in GHQ because, as you see just above, I've been building some Warbases' German rural buildings for my SYW games. Like the buildings from rival Charlie Foxtrot the 28mm scale/size buildings look huge to my eye. I would think they were really aimed at the Skirmish Gamer of such iterations as Sharp Practice for example. I want several building options for games but don't want the tabletop battlefield dominated by urban sprawl! My decision was to go with 20mm scale/size options and even the barn I've built and painted looks too large. It will be awhile until all four buildings are on the table in GHQ, even though they are all now built,but it is my hope that they will look more acceptable to the eye in relation to the units and terrain features than their giant brethren. 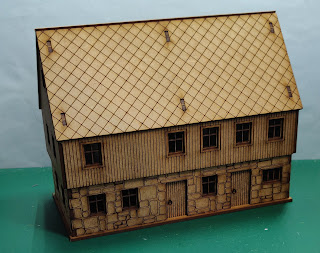 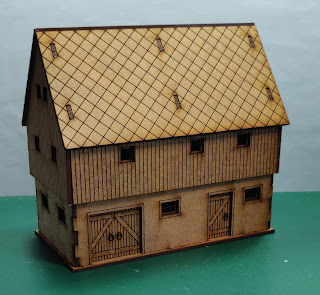 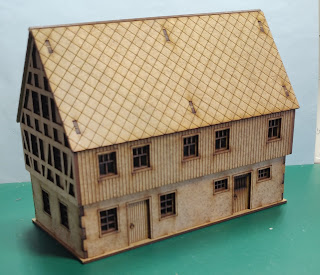 Of course, this is simply a matter of my taste for the look of games and the size of tabletop battlefield here in GHQ. Over time I have tended towards putting my buildings on a base and calling everything on same as in hard cover, thus alleviating the vexed questions of both the size/number of buildings occupied and the degree of cover benefit. Where I've not done this, then some buildings are merely used for decoration/eye candy and confer no benefits beyond looking nice! 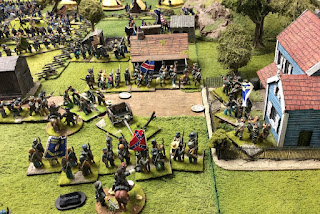 No doubt I have lost some to boredom by now, so I'll go back to painting the remaining buildings, leaving weathering and such until they are all done, and see what response, if any, this gets.