Just out of general interest really, but Sue and I visited Stokesay Castle in Shropshire on Thursday, in the company of grandsons #1 & #3  - aka Arthur and Reuben. The castle, really an early example of a fortified manor house, is in the care of English Heritage so it features the usual signage to enlighten the visitor and a 'discovery' trail designed to entertain and hopefully educate young visitors.

The Dramatis Personae enjoying the pre-tour picnic in delightful, but sadly not wasp free, summer sunshine! A general view of the castle as a backdrop.

The main features of the castle are the main hall, the south and north towers and the gatehouse. The walls were reduced after the Civil War, so the lower format gives plenty of all round views without the usual climbing and vertigo! 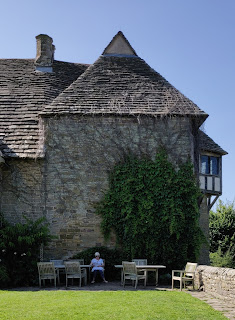 The North Tower viewed from the courtyard.

View of the north aspect of the tower from the adjoining churchyard.

The adjoining church viewed from the North Tower. The church is interesting in its own right, having been extensively restored during the Commonwealth period following the damage wrought during the Civil War siege. The interior shows several unique features to the period. It's opening hours mirror those of the castle.

View to the north, towards Craven Arms and Shrewsbury.

The Great Hall viewed from the southern face of the courtyard. 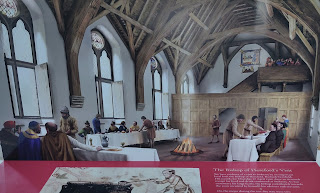 The possible appearance during a visit from the Bishop of Hereford. One of many informative interpretation boards around the castle.

The interior of the Great Hall as it appears to the visitor today.

The South Tower, viewed from the southern face of the courtyard.

View southwards towards Ludlow from the high point of the South Tower. The farm below is a working farm and not part of the castle estate today

The great carved fireplace in the main chambers of the South Tower.

The half timbered gatehouse through which you enter the castle courtyard area.

Arthur and Reuben tackling the Discovery Trail, with a little encouragement and help from Nanna Sue of course.