A second dipping of the toes into a game in my Tales from Pendawar project was the subject of our most recent regular Monday game here in GHQ. Phil once more took on the command of the E.I.C.'s Army of the Pendawar Presidency and yours truly the command of the Army of Typoo Bhyka, the Tyger of Pendawar. The major objective was to flesh out the particular characteristics for units on both sides, especially for the elephants of Typoo's army where Black Powder 2 is particularly lacking in guidance.

The Army of the Pendawar Presidency drawn up for battle under the command of Lord Rawnsley. Three Brigades are ready for action against Typoo Bhyka's army

...supported by some mounted Hill Tribesmen and a musket and jezail armed band of their fellows protecting the 'Great Gun of Bhyklabad'.

The centre of Typoo's army is made up of his Regular Infantry: three Native regiments supporting his European mercenary regiment, the Voluntaires de Bykli.

The left flank of his army comprises the household elements of the Raja of Rhanli and Typoo's warrior cavalry. 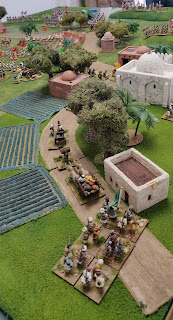 On the right flank Typoo's tribesmen and warriors were beaten to the low rise to their front by the determined advance of the Second Brigade lead by the Native Infantry. Uncoordinated attacks saw the leading tribesmen hurled back behind the village!

On Rawnsley's right flank a strong refused flank position forced Typoo to press the attack in less than favourable conditions. The centre of regular infantry were slow to get forward, wary of the threat posed by the 20th Light Dragoons and their Native Cavalry support.

Things were going badly from the start on Typoo's right flank with the Second Brigade holding the low ridge and dominating the village. 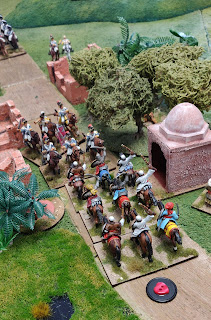 The Hill Tribesmen's mounted arm saw an opportunity to open up the centre, charging down the road and throwing back the 20th after a sharp melee.

Buoyed by that success their compatriots surged forward once more to attempt to drive off the Second Brigade to their front. 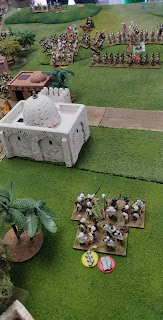 The brave attempt was met by withering volleys and the bands of warriors were hurled rearward in disorder.

Typoo's right flank is broken in the face of volley after volley backed up by cold steel at close quarters. Fortunately the situation is becoming more favourable to his position elsewhere on the field.

"Follow me, my brave boys! Follow me!" Seeing an opportunity Phillipe-Jean leads elements of Typoo's cavalry in a bold flank charge against the 2nd Native Infantry. Surely this will break Rawnsley's right and halt his unopposed advance?

Meanwhile on his Right flank the South Essex are broken by combined Artillery fire and volleys from the Tyger's Eye regiment. Disorder is spreading in the First Brigade and the 20th can only look on in despair.

Despite some chaos caused by the stampede of the Raja's elephants, Typoo's left flank holds up and presses home their advantage, breaking the First Brigade's resistance and driving them from the field. It's all up for Rawnsley on this occasion.

Email ThisBlogThis!Share to TwitterShare to FacebookShare to Pinterest
Labels: Games, Tales from Pendawar