As I mentioned in an earlier post, Jon and I had planned an Anglo-Zulu War game for this week's session. I devised a scenario where he would be the British player while the Zulus would be controlled by the Auto Generator system in my rules, Washing the Spears, and I would act as Umpire and general dogsbody! The game begins with the British force tasked with escorting supply waggons and cattle to a British outpost overlooking Chief Bykelezi's Kraal. The force faces three Zulu 'Blinds' indicating areas that Zulus might be expected to appear from. His force has an element of native scouts who must approach within 4" of each 'Blind' to determine if it is active or a false report. In fact unknown to Jon each is false, the game only really begins when he has explored all three blinds and realises he does n't know where the Zulus are! He then has 12 Turns to survive to win the game. The table at the onset of the game ~ 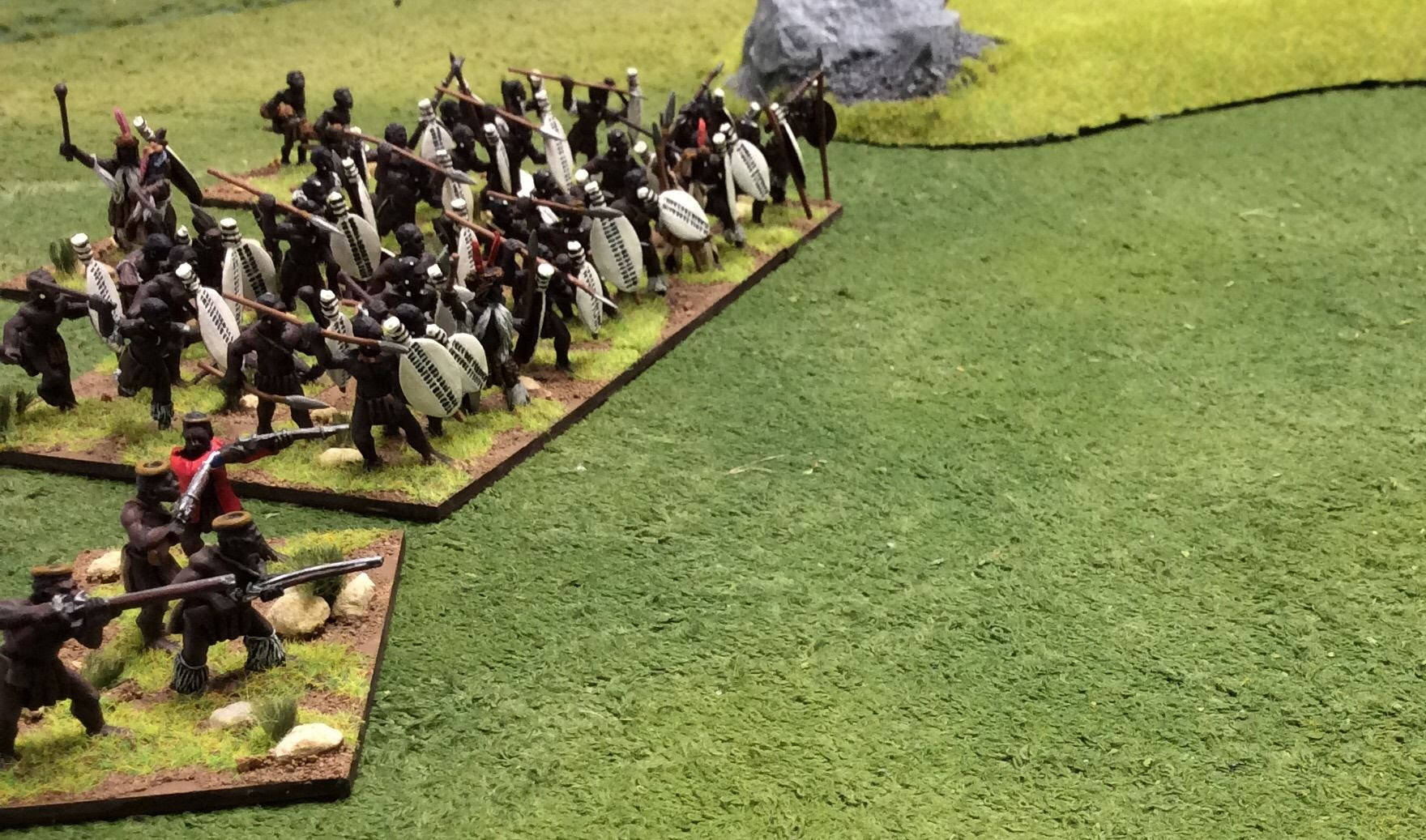 Somewhat surprised, Jon found his Natal Mounted Police element right in front of the Zulu entry point! Discretion proved to be the order of the day and they retired to safety rather smartly ~

More Zulus appeared and headed straight for the rear elements of the British column! The artillery had deployed on the low hills, flanked by the Mounted Infantry detachment, to cover the withdrawal of the irregulars! Meanwhile the Lancers were circling the Zulus' right flank ~

The gallant Lancers gathered for the charge and easily defeated the Zulu riflemen, sending them in full flight when their Pluck failed! The warriors now found their flank threatened by the wild horsemen ~ 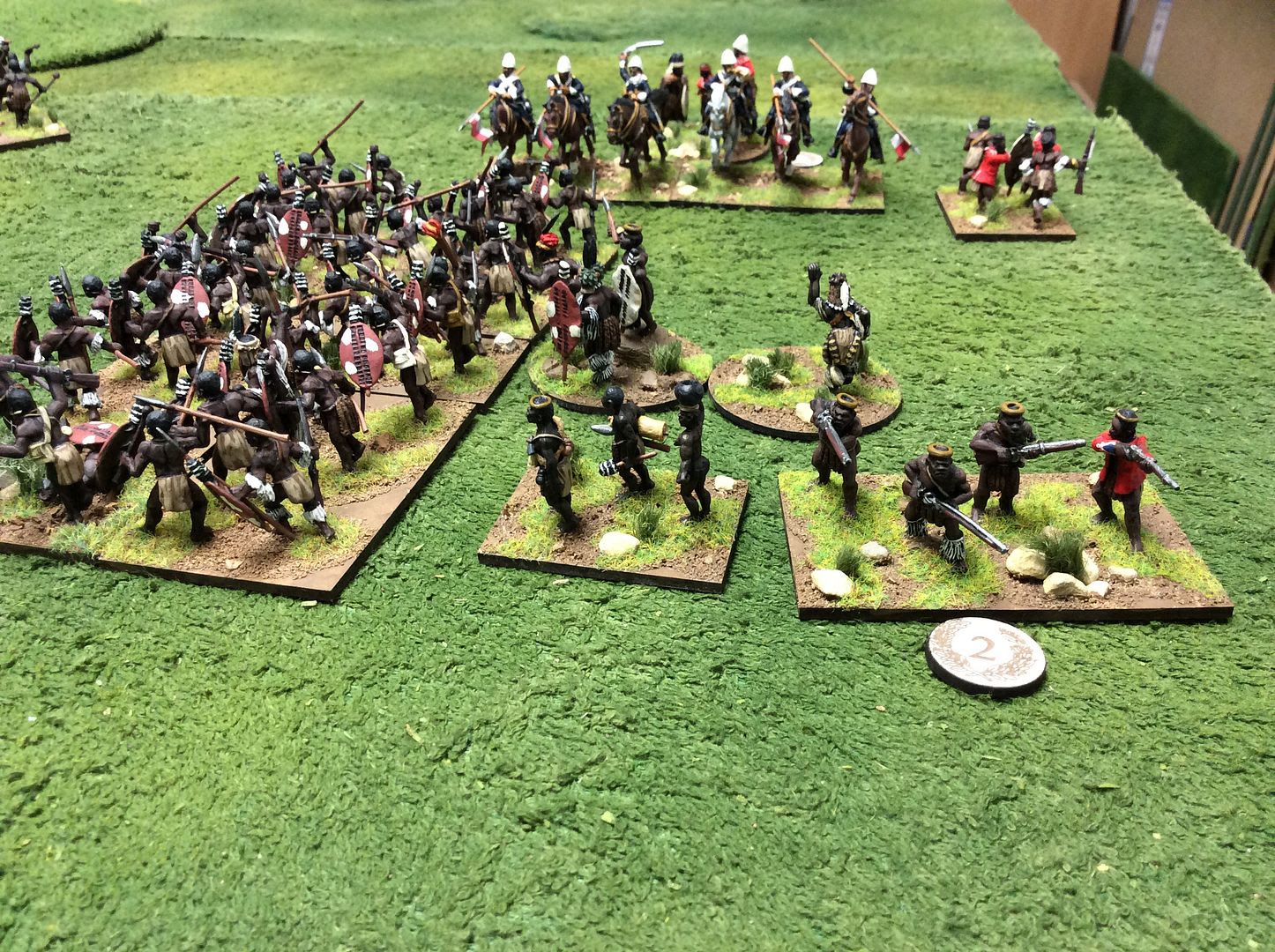 With their dander well and truly up, the Lancers smash into and defeat another Zulu rifle element! Things are not looking good for the Zulus at this point ~ 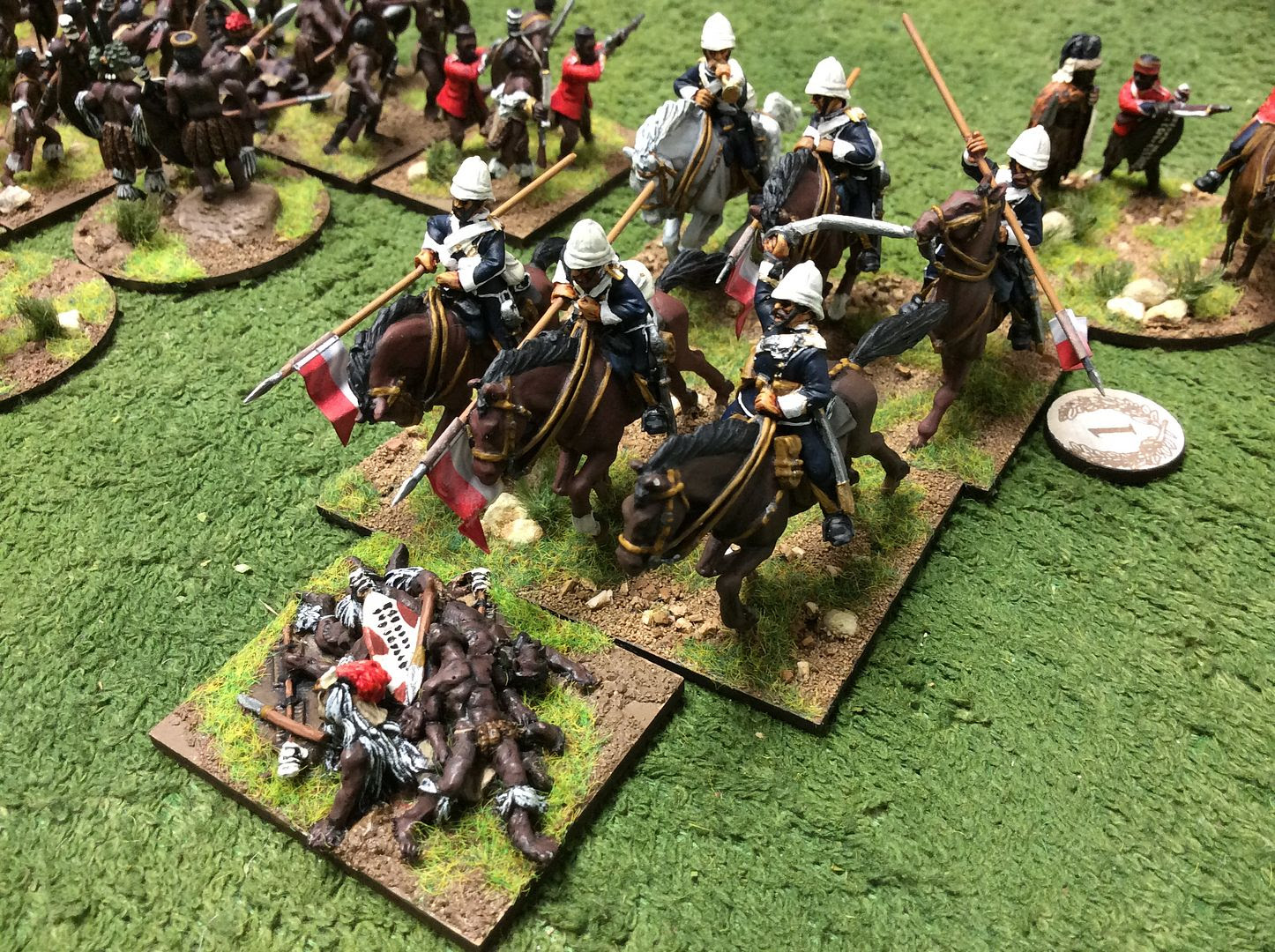 A third element of rifle armed Zulus are summarily destroyed! At that point the Lancers' horses were deemed to be 'blown' and they must regroup before any further offensive action can be ordered ~

So far the British are holding off the Zulus on their left flank, while wondering all the while where the next enemy will spring from! Without the Lancers their flank is rather exposed to attack from the Zulus on the table ~

As you can see, the Staffordshire Volunteers have just realised their are Zulus to their front and have hastily taken cover behind the supply waggons. Only just in time as it worked out! Things are looking far from bright for the remainder of the force at this point! Probably an 'Imperial Brown Trouser Moment' in the game ~

The gallant lads from Staffordshire see off the first Zulus to appear, a small group of allies armed with ancient rifles proving no problem for their marksmanship, and follow that up by defeating the warriors who rush their barricades. Zulu 'Pluck' is proving unusually fragile ~ 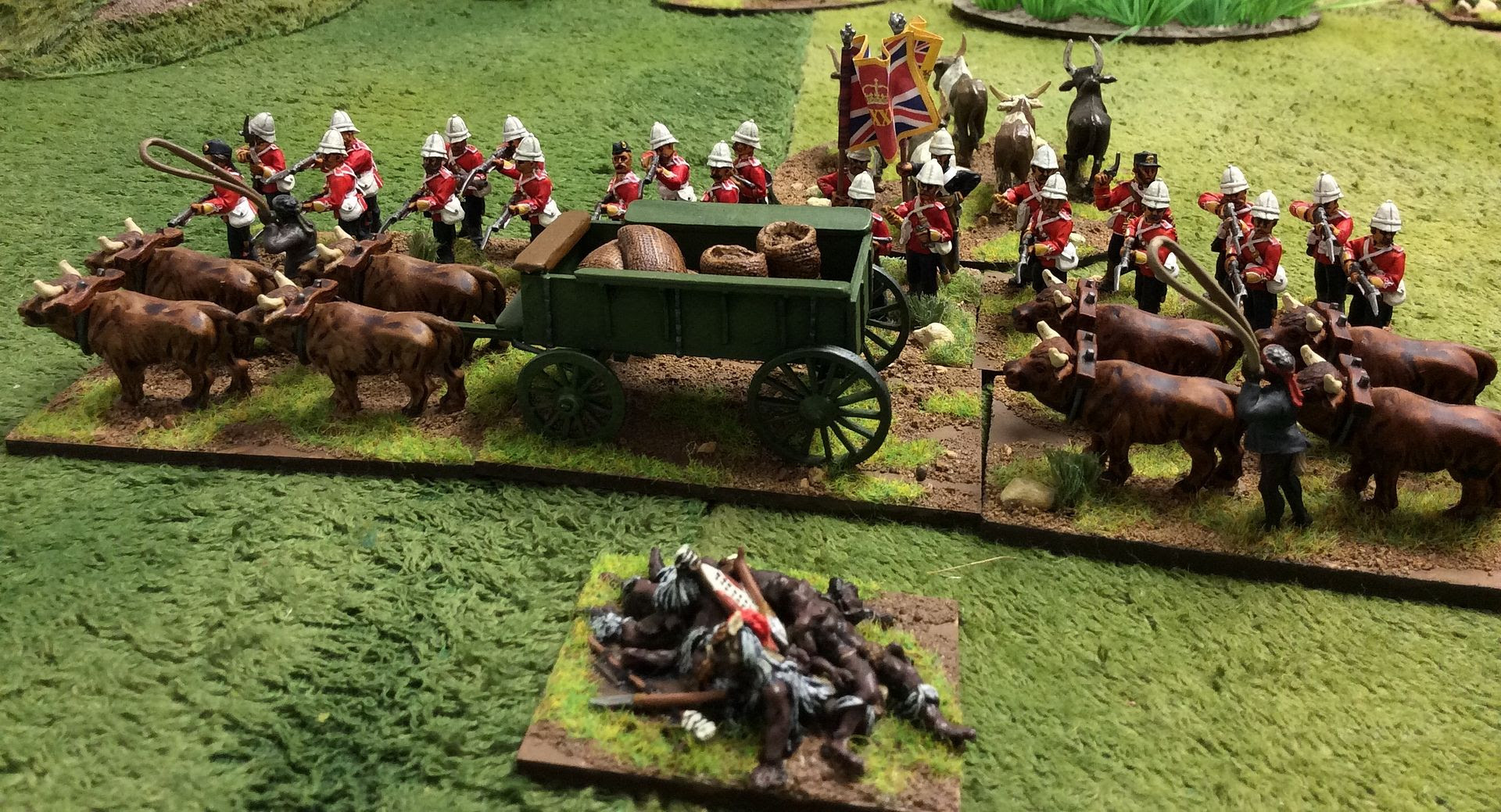 By now all the Zulus are on the table and pressing the attack wherever they can! Sadly the Zulus run out of time when the twelve turns are up! They have lost too many men to the British forces small losses and so the British are declared the winners ~ 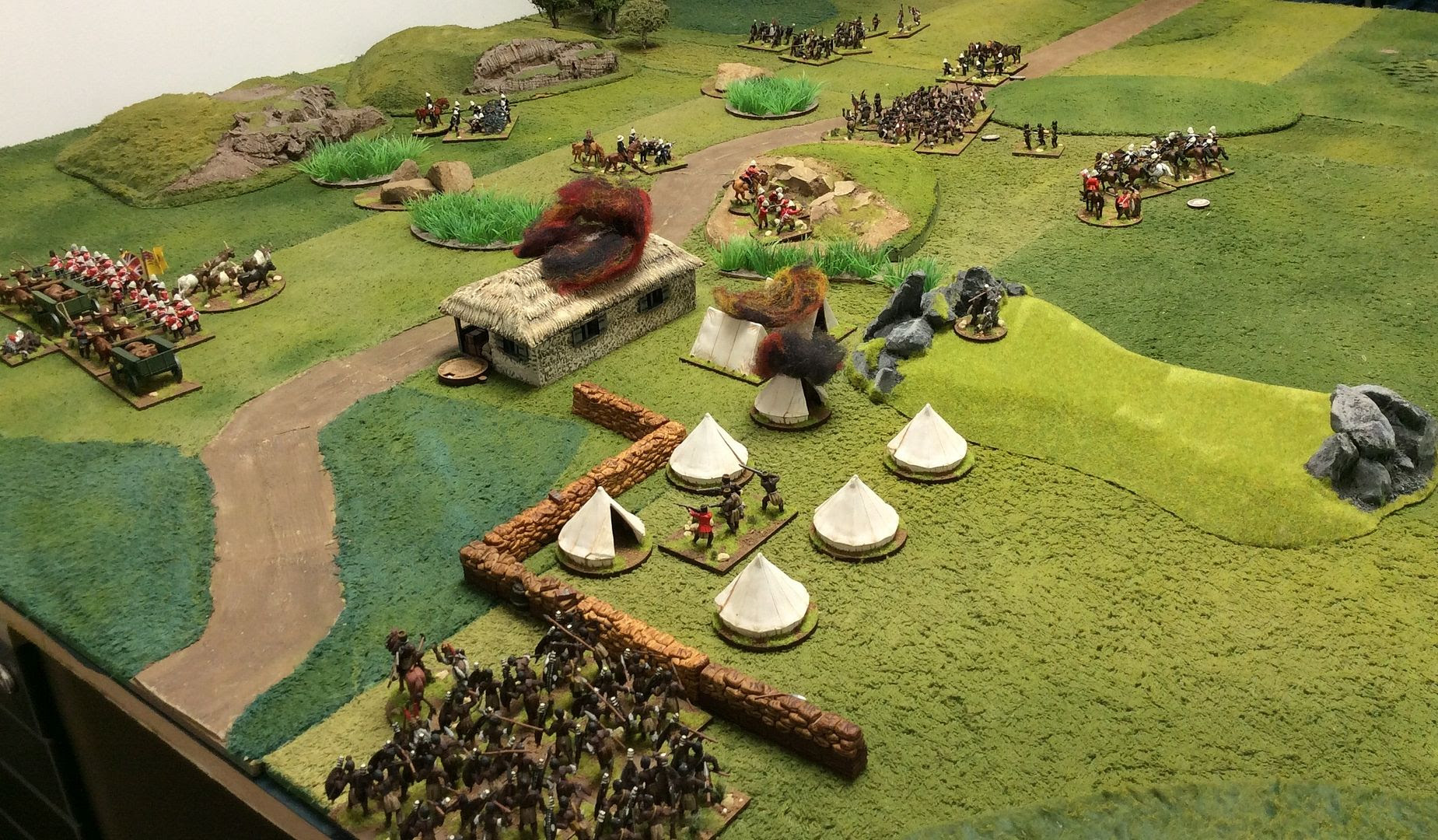 Chief Bykelezi m'Tubbi will have to raise fresh warriors to resist the onward 'march of civilization' into his lands. Already runners have been dispatched from the chief's kraal summoning warriors to the defence of their chief and his lands ~ 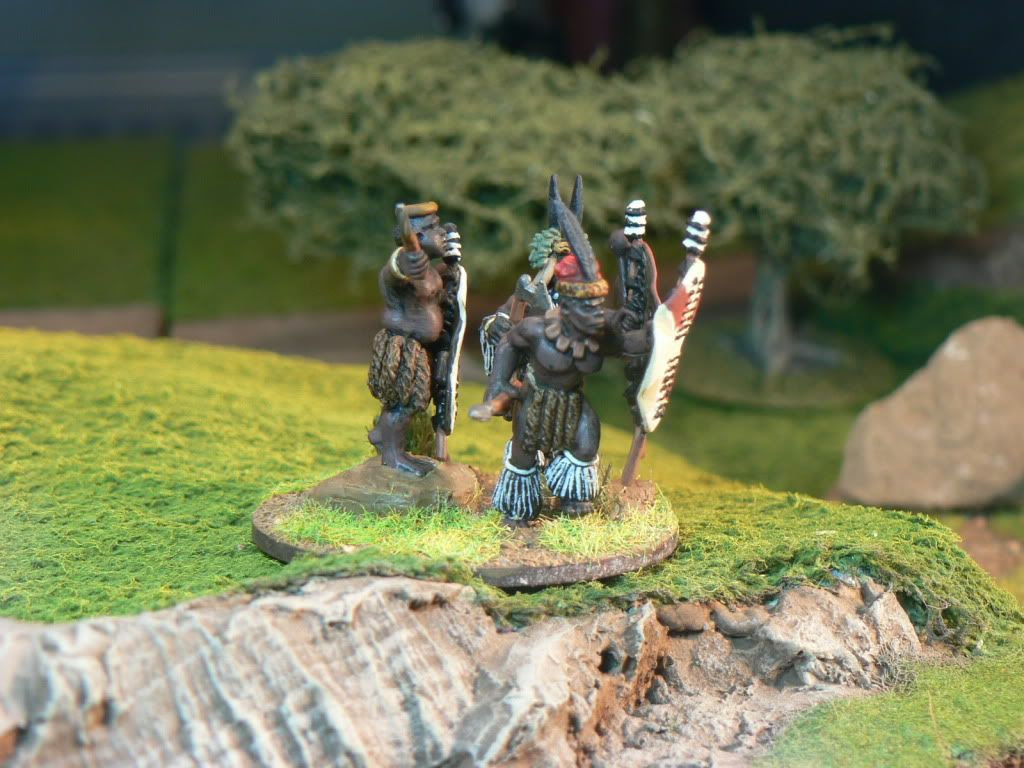 A grand and tense game for the British, which I enjoyed seeing unfold rather more than Jon did at times! The failure of the Zulus' 'Pluck' in several first tests was very unusual and certainly made it less arduous for the British force in the second half of the game. It would have been a very different story had the warriors not fled so easily! I guess the rocket attacks finally broke their nerve!
Next week GHQ should see two SYW games being played, one using the new 'Honours of War' rules and the other using Black Powder. It will be interesting to see how they differ in play. Pop back next week to see how it turns out!