Well, as we all know to our cost, it does n't really pay to count your chickens before they are hatched! The second game last week, scheduled for Thursday against Jon, had to be cancelled at short notice due to illness! That left me with unexpected painting time, so I decided to knuckle down and paint some ephemera for the Wars of the French Revolution project, which I have to say has really grabbed my mojo lately! It certainly helped that I had received from Phil for Christmas the new Boot Hill Miniatures figures for the Mexican general Santa Anna, who comes in both mounted and dismounted versions. I had mentioned to Phil earlier on that I thought they would make sound additions to the project, as both ranges were/are sculpted by Matt so should fit well together. Anyway, you can judge for yourself when you look at the pictures coming up in a moment. I had some Perry Miniatures French staff officers and ADCs already stashed away which I thought would do to add to the look and I had just ordered a new Command Tent from Dave at Grand Manner to complete the scene. Anyway, take a look and see what you think ~ 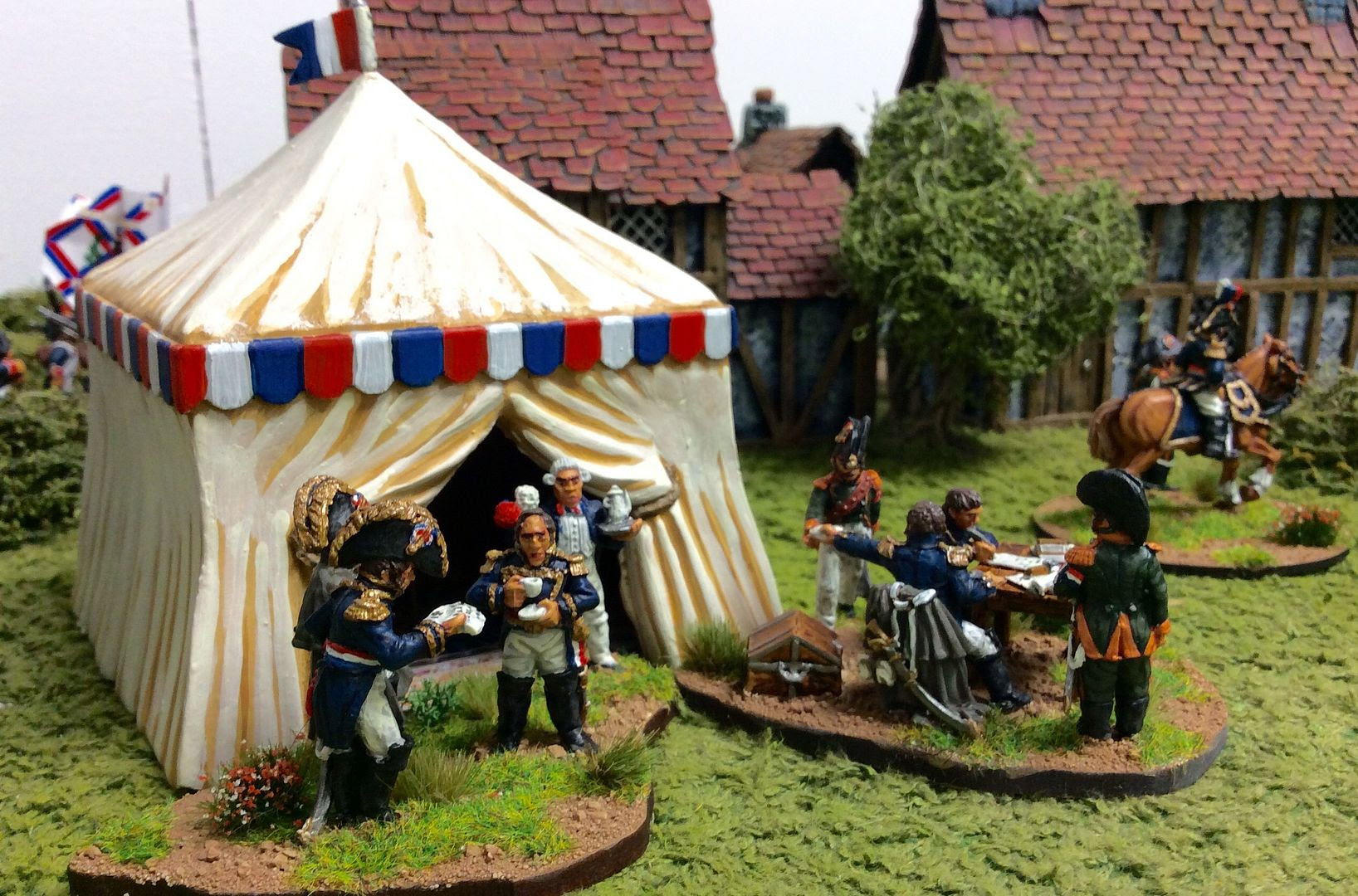 A general view of the whole group. The tent will have a base later in the month to bring it up to the height of the figure bases around it as well as having some extra detritus added, when I can find where I've stored it! 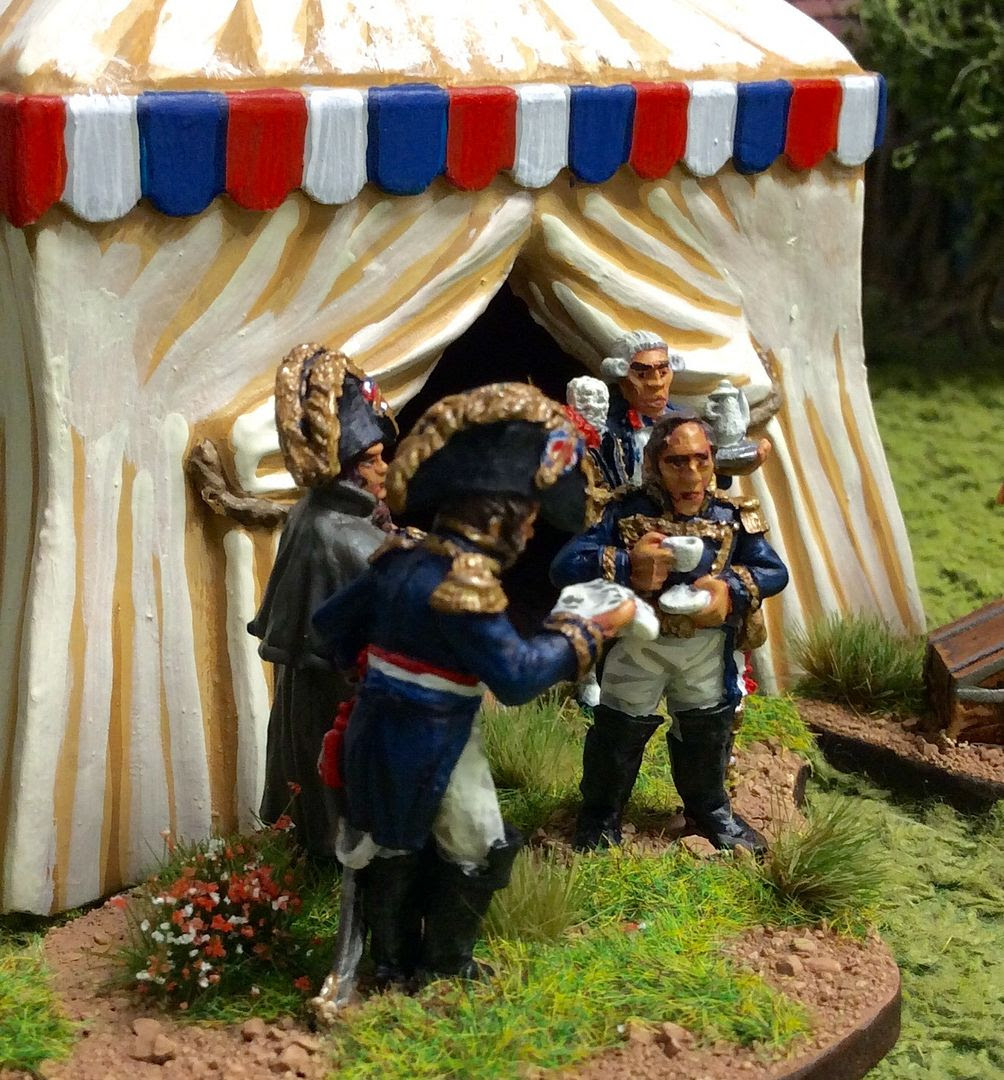 A close up of the main command vignette: Boot Hill 'Santa Anna', aka General de Byklie, taking tea and advice, which he certainly needs I find. The two figures on the left are from Perry Miniatures, Generals Rawnsley and de Paddoc. 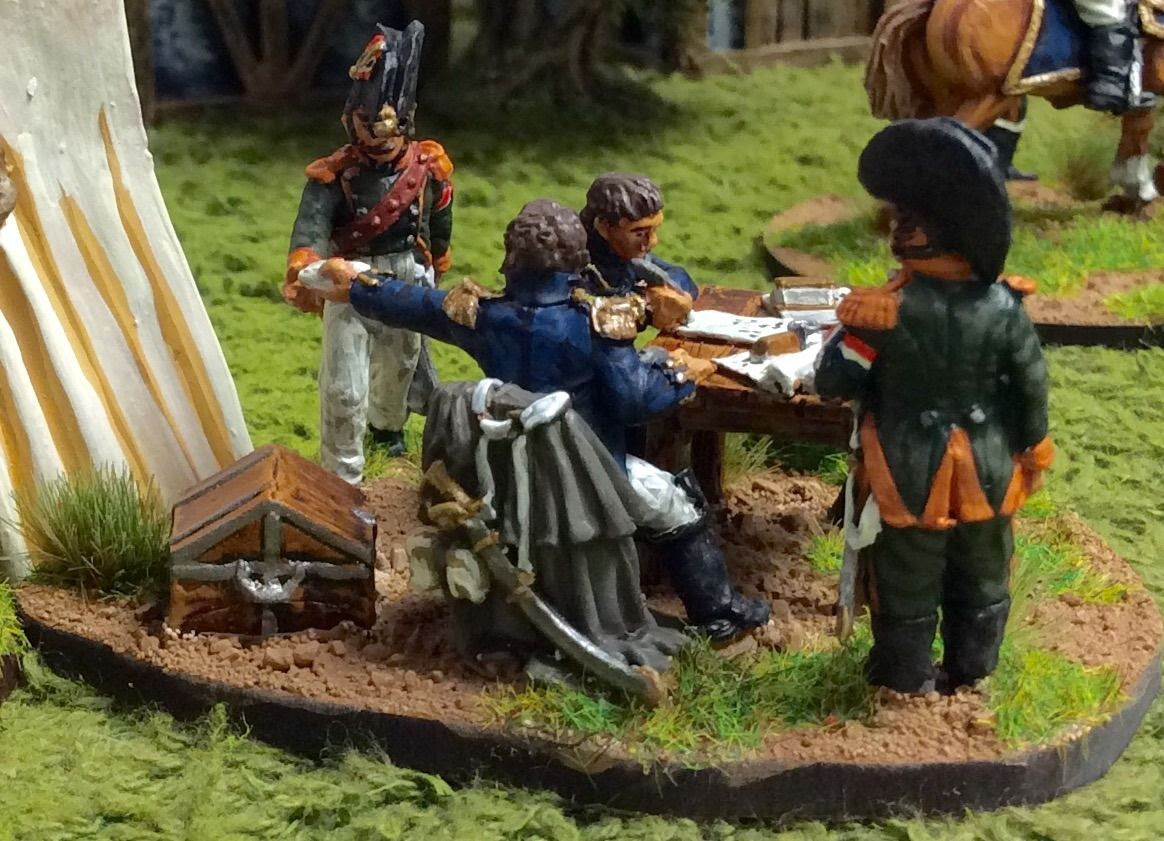 The staff set is from Perry Miniatures of course with added bits from Irregular Miniatures.

Finally, the mounted Boot Hill 'Santa Anna' with a Perry Miniatures ADC to command the French Light Cavalry Brigades in our bigger games ~ 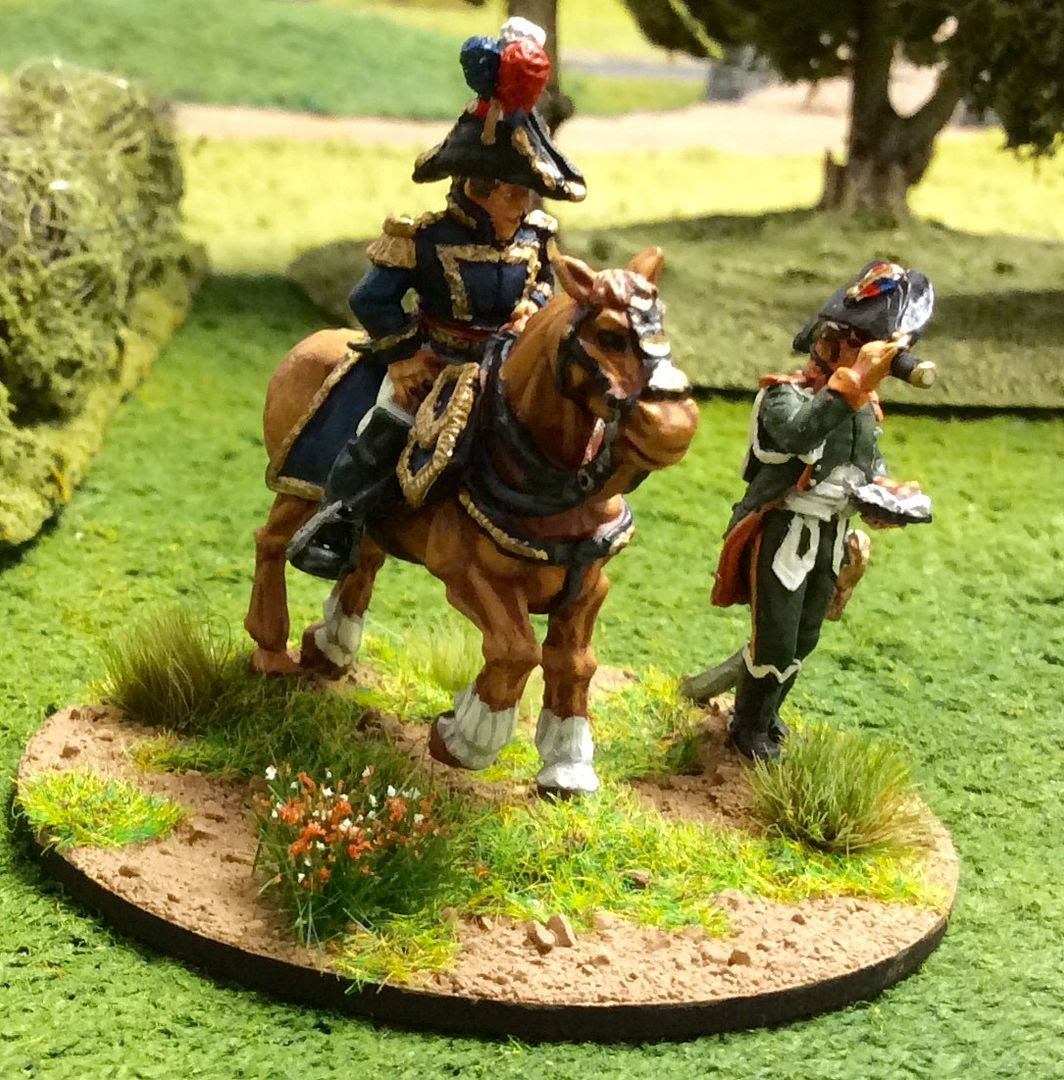 No doubt some wild eyed button counters or lace junkies will be queueing up to tell me its all wrong, but it will do for me. I'm not too worried about the fine details in this project, as the Wars of the French Revolution are not exactly well served by numerous companies, which is a shame as its both colourful and small action friendly I find. In fact, so enthused have I become of this project that I've overturned by best intention and ordered some additions to the project's lead pimple in the form of limbers and caissons: for the French from Eureka and for the British from Front Rank. The Austrians will have to wait I'm afraid until I source something that will do from the available later sets.

While I was on the roll with these I rebased the skirmish figures for the Dunwhinggin Fencibles. They are Trent Miniatures of course with added scenics from Irregular ~

As its full steam ahead in my painting room at the moment I've started the latest Trent Miniatures Austrian infantry regiment, another Hungarian one of course. The first four figures have all the basic colours on so should be finished early next week. Monday will see me over at Phil's OHQ for another WWI game using adapted Chain of Command rules {one day I may even understand what I'm doing!} with Phil's wonderful figure collection and scenery. With luck, Jon and I will play our postponed game this week sometime, so stay tuned for a report of my latest efforts!

Finally, for those who think I am too modest about my mediocre painting skills I'd like you to have a look at Matt's medieval knights. All are metal castings, from Ebob I think, but every one is modified to a greater or lesser degree and ALL the heraldry is painted free hand!

He works on these in his spare time, which is very limited of course, when he isn't busy sculpting for whatever company he's working with at that moment in time ~ 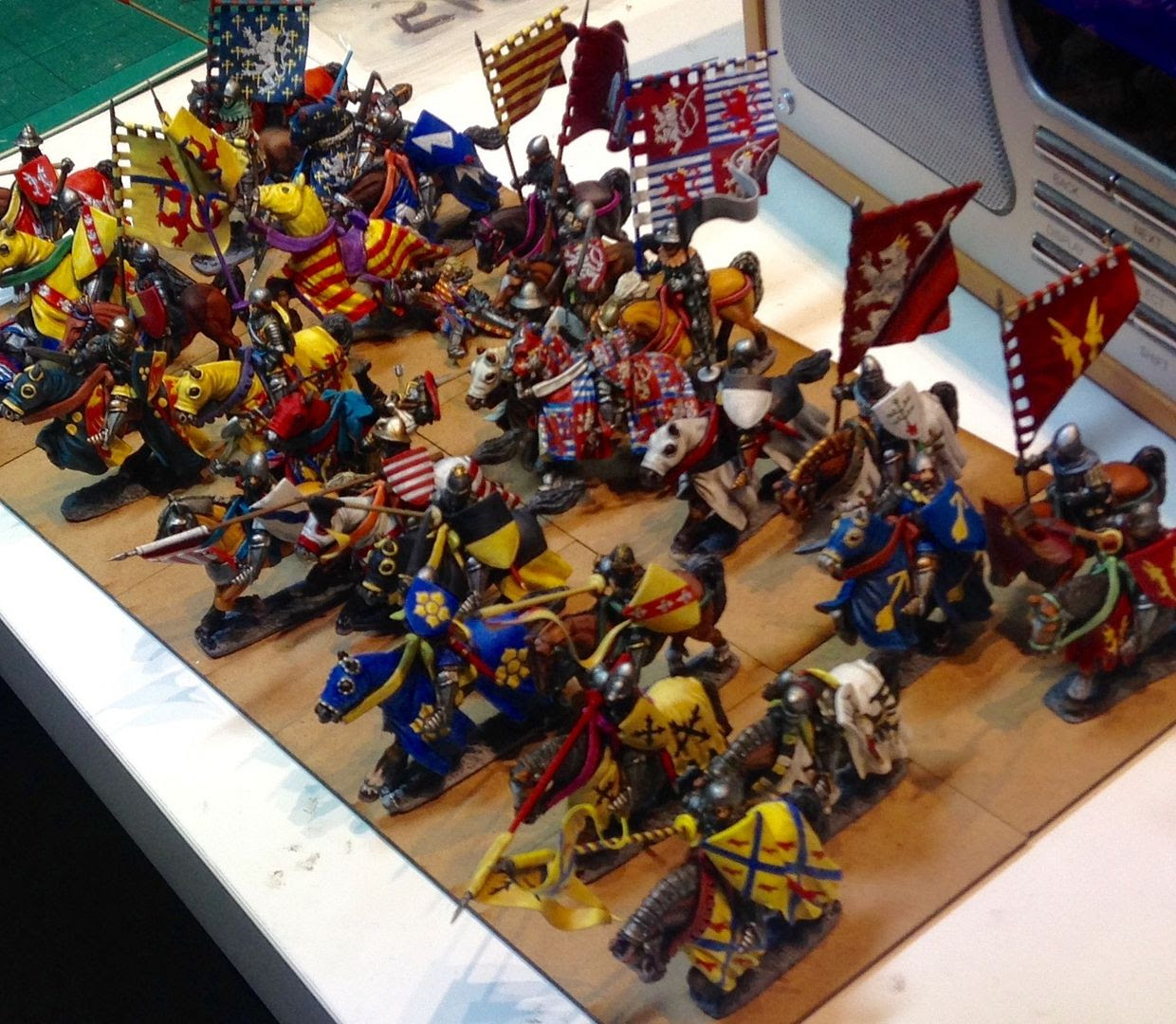 Sometimes you know, I just think I'll give up painting altogether when I see work like this!
Posted by David at 04:31