An Iron Cross or a Steel Coffin!

Earlier this week Jon and I met up in GHQ for a planned WWII game, using my favourite set of rules, "Rapid Fire!" and my 20mm collection of figures, vehicles and scenics. As is usual, I took command of the Germans and Jon of the British. The scenario see the stretched German defenders attempting to deny the British use of the road which crosses the table from north to south. The British are making a reconnaissance in some strength, having no reliable intelligence of the German dispositions, but do know that there are two towns they must pass through, or round, and several farms and hamlets along the way. Unknown to the British, the Germans are very stretched to defend all the choke points and must make hard choices in their dispositions before the British enter the table. The game lasts for up to 10 turns and the British will win if they get one element off the table safely at the German end! If they don't, then the Germans win, except...well, lets leave that aside for a minute. The German HQ is located in the larger town near their edge of the table ~ 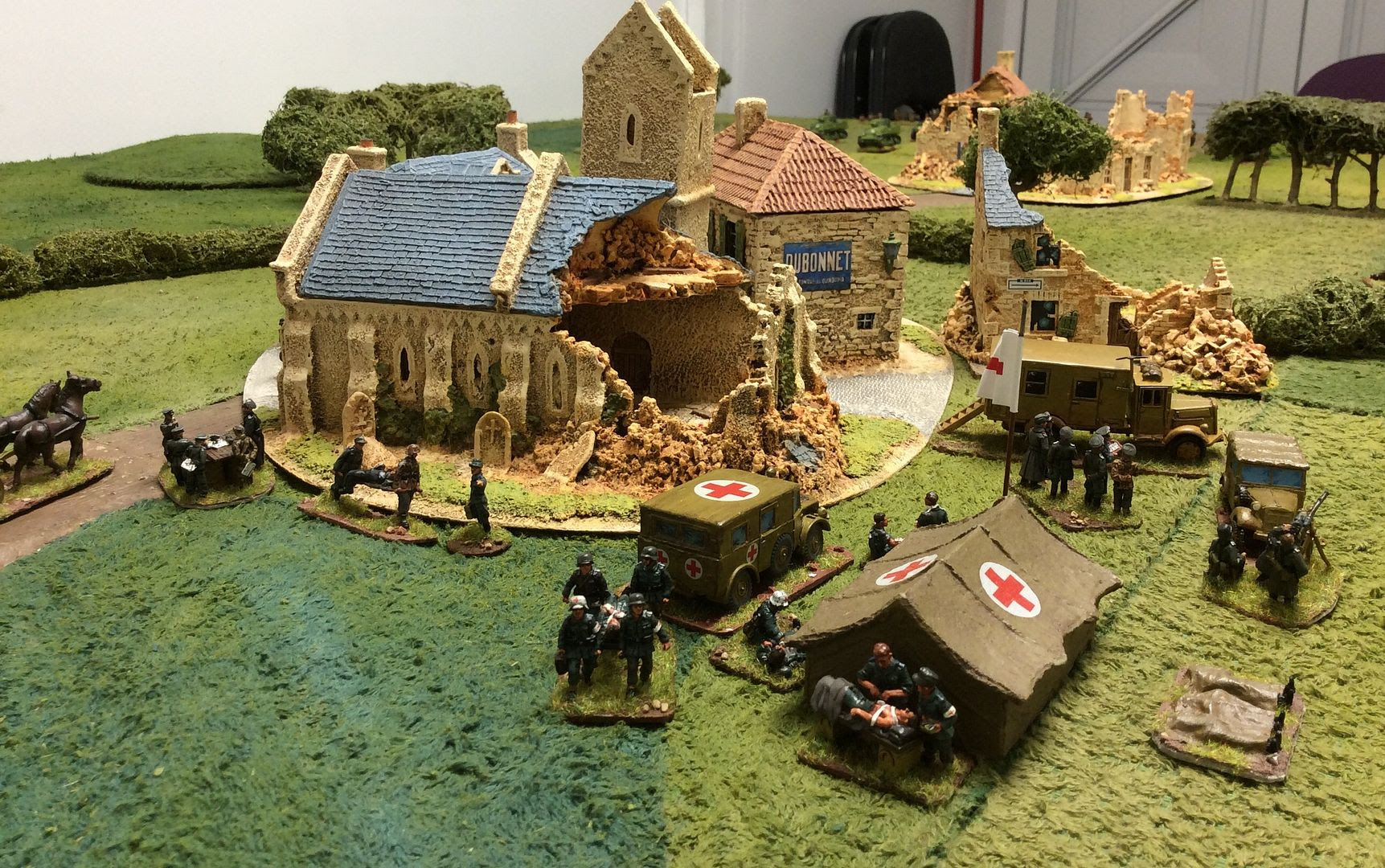 From here they will attempt to coordinate their forces, including a battery of artillery 'off table', but represented on the far edge of the tabletop for the look of the thing ~ 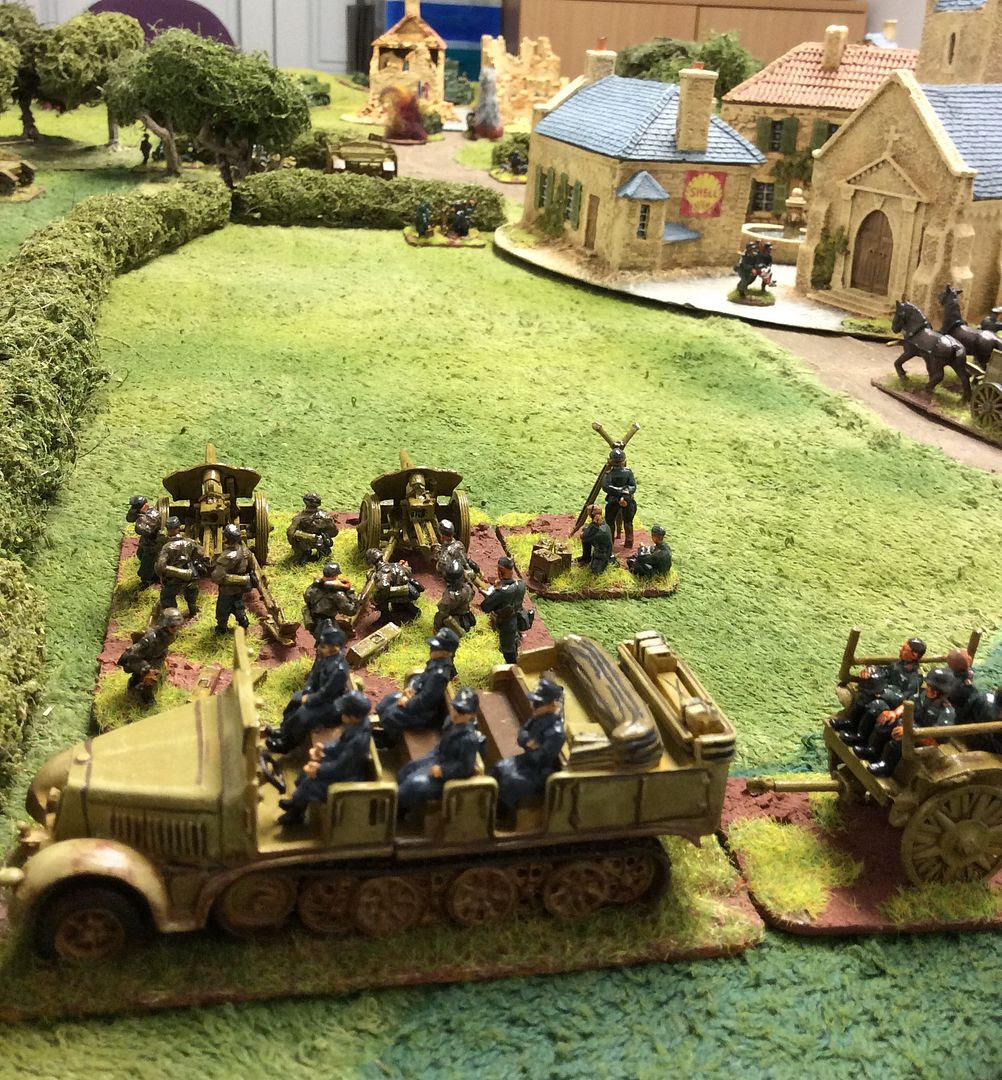 The British have two Infantry units to support their reconnaissance efforts, one in carriers and one in half tracks. The reconnaissance is spearheaded by Stuart tanks and the whole is supported by a Churchill tank company and a battery of off table/on table 25lbers ~ 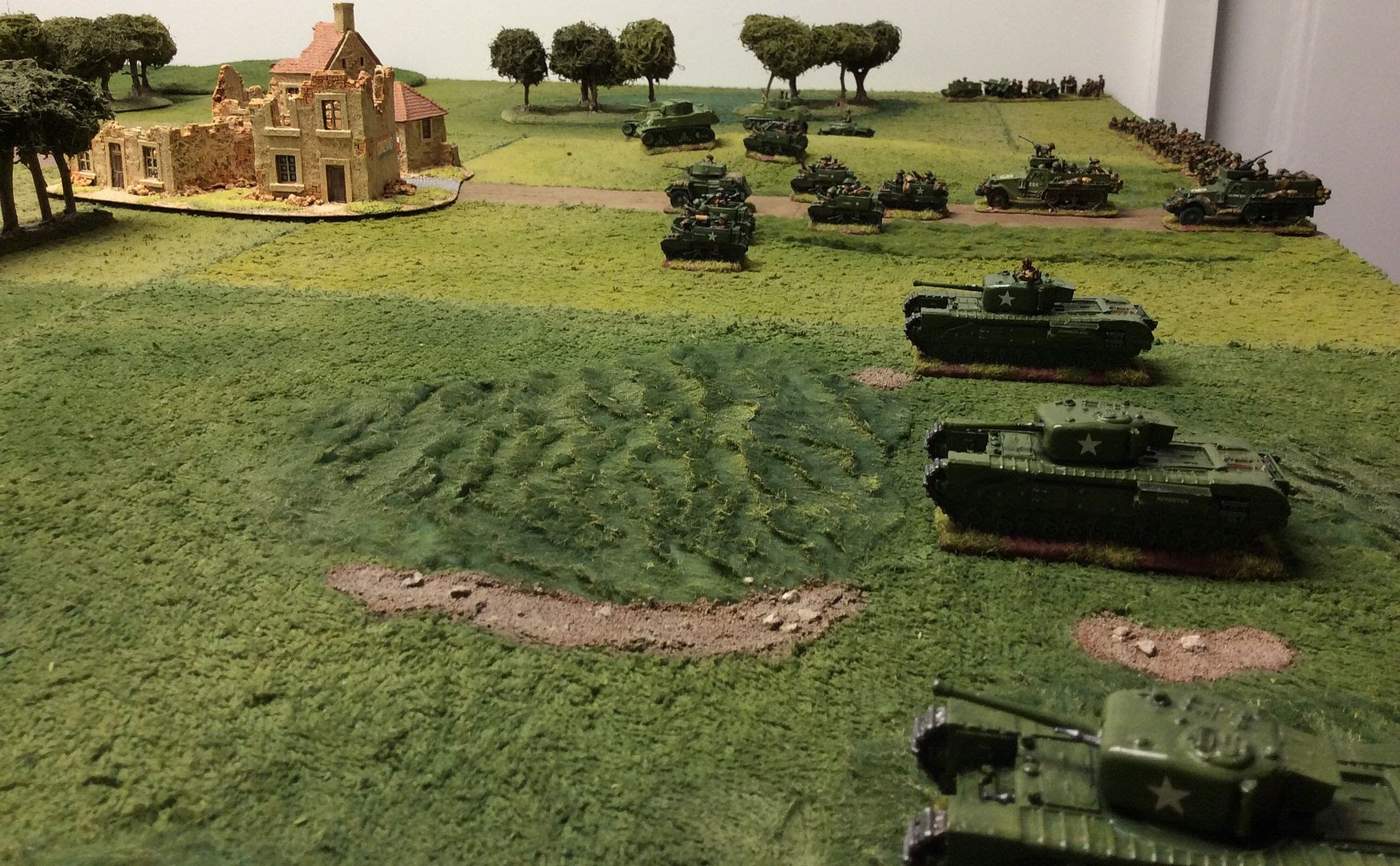 I had deployed one element of infantry in the smaller town nearest the British entry point, hoping to take out a lead vehicle with a panzerfaust and throw the whole advance wide open, perhaps persuading Jon there was more there than he thought. Fat chance, as I missed! The little Fritz's defended the town valiantly, but were destroyed to a man in bitter street fighting, while their supports in a neighbouring farm complex were soon on the run, facing the Churchills with no anti tank capability. It was already clear by Turn 3 that my dispositions had been wrong, or rather Jon's had been better ~

The main German plan in tatters, all rested on my Stug company, supported by two elements of infantry and a couple of mortars. The lead carriers were soon neutralised, driving the remainder back into the town, but I was not so successful with the Stuarts in the next turns! It might have helped if my artillery had managed to hit their target, but no, misses all round. On the other hand, Jon's 25lbers could do no wrong! 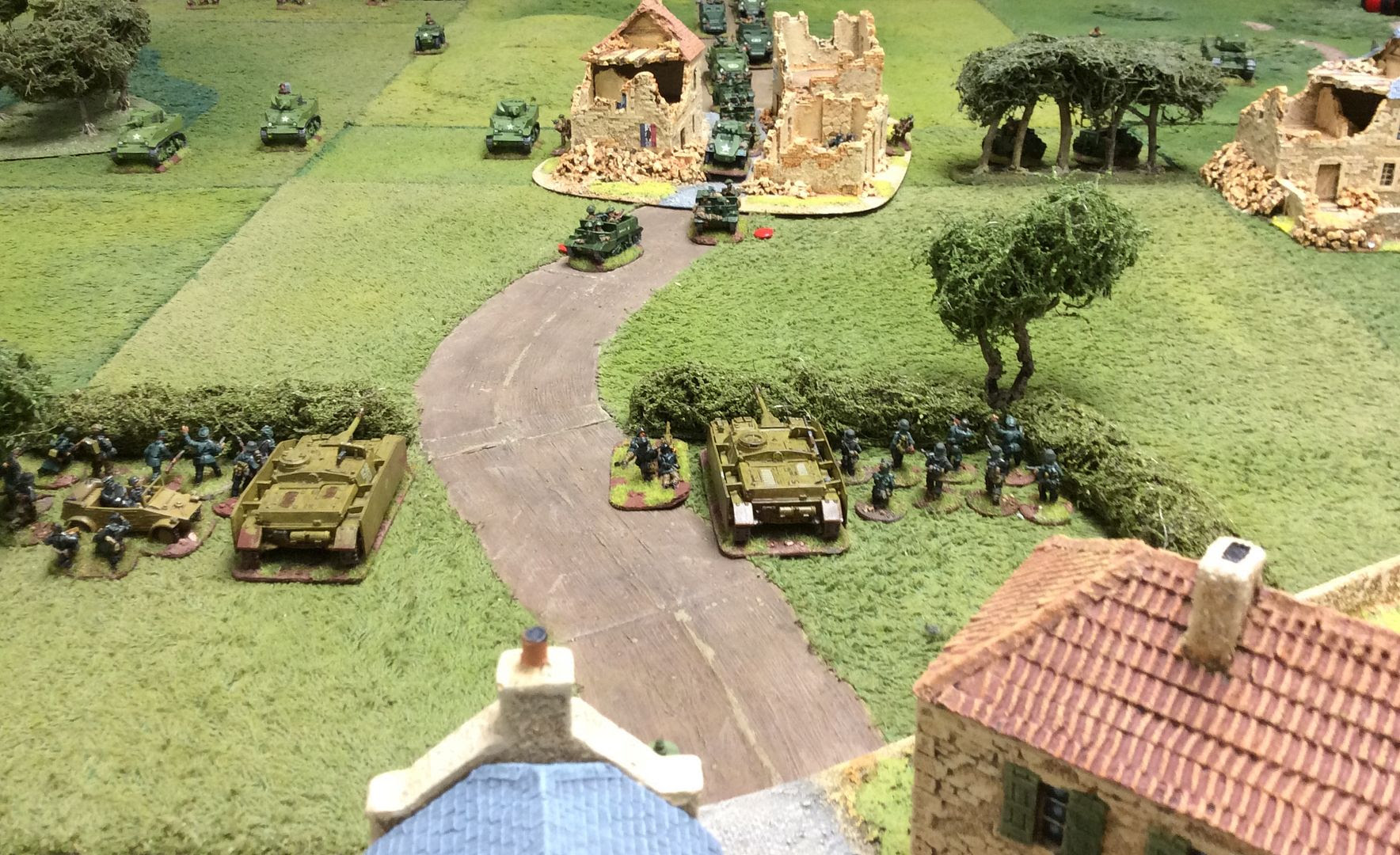 With the Stugs both destroyed the German's last hope was their Panzer IV, initially deployed hull down on the higher ground on the German left. It had successfully destroyed on Stuart already and forced the remainder to retire hastily to the cover of the wood. Now it advanced bravely to block the Churchills' advance on the final point of resistance ~ 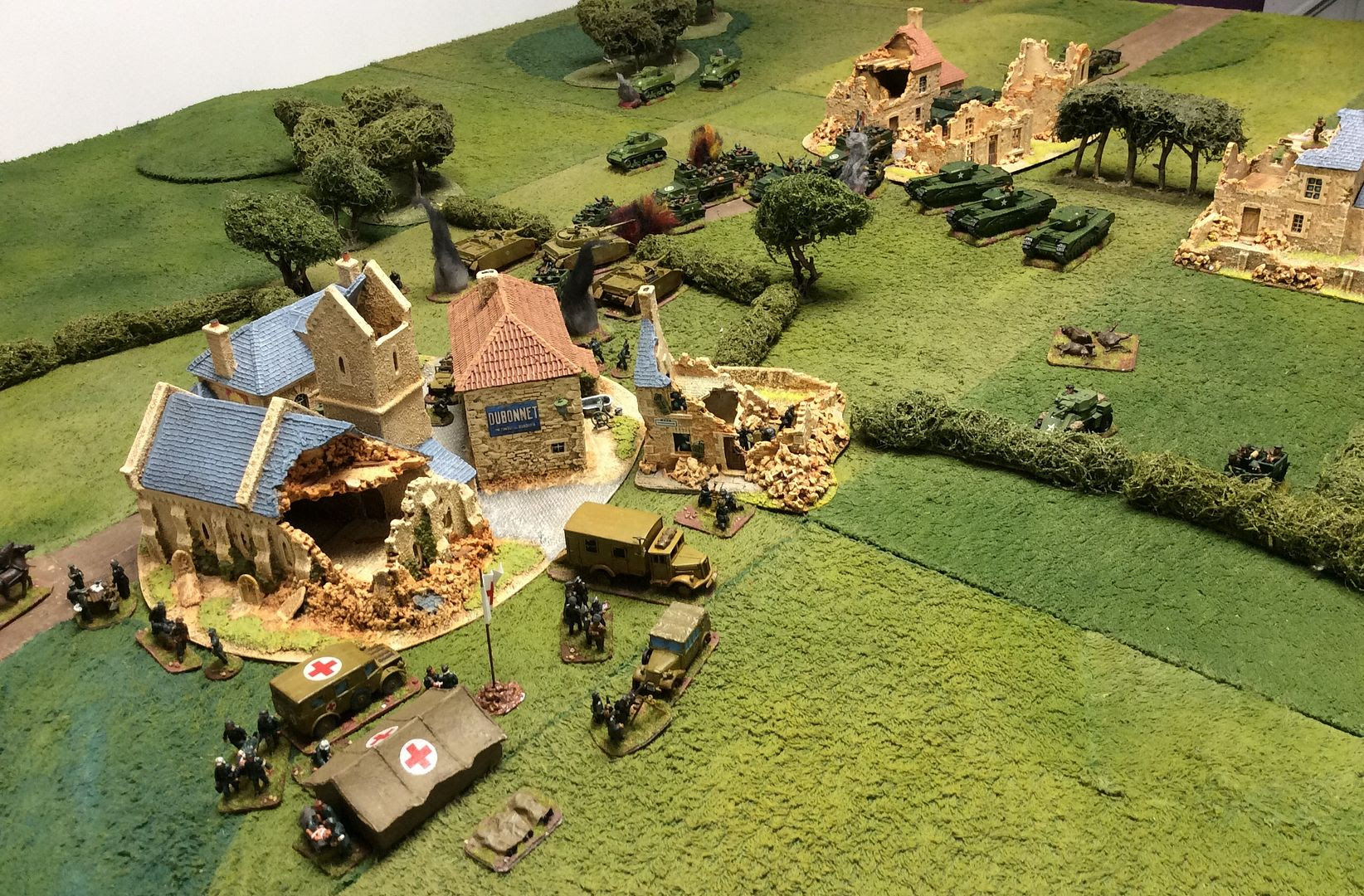 The final moments in Turn 7. The Panzer IV enjoys some success against the half track borne infantry, but is in turn knocked out by the Churchills! 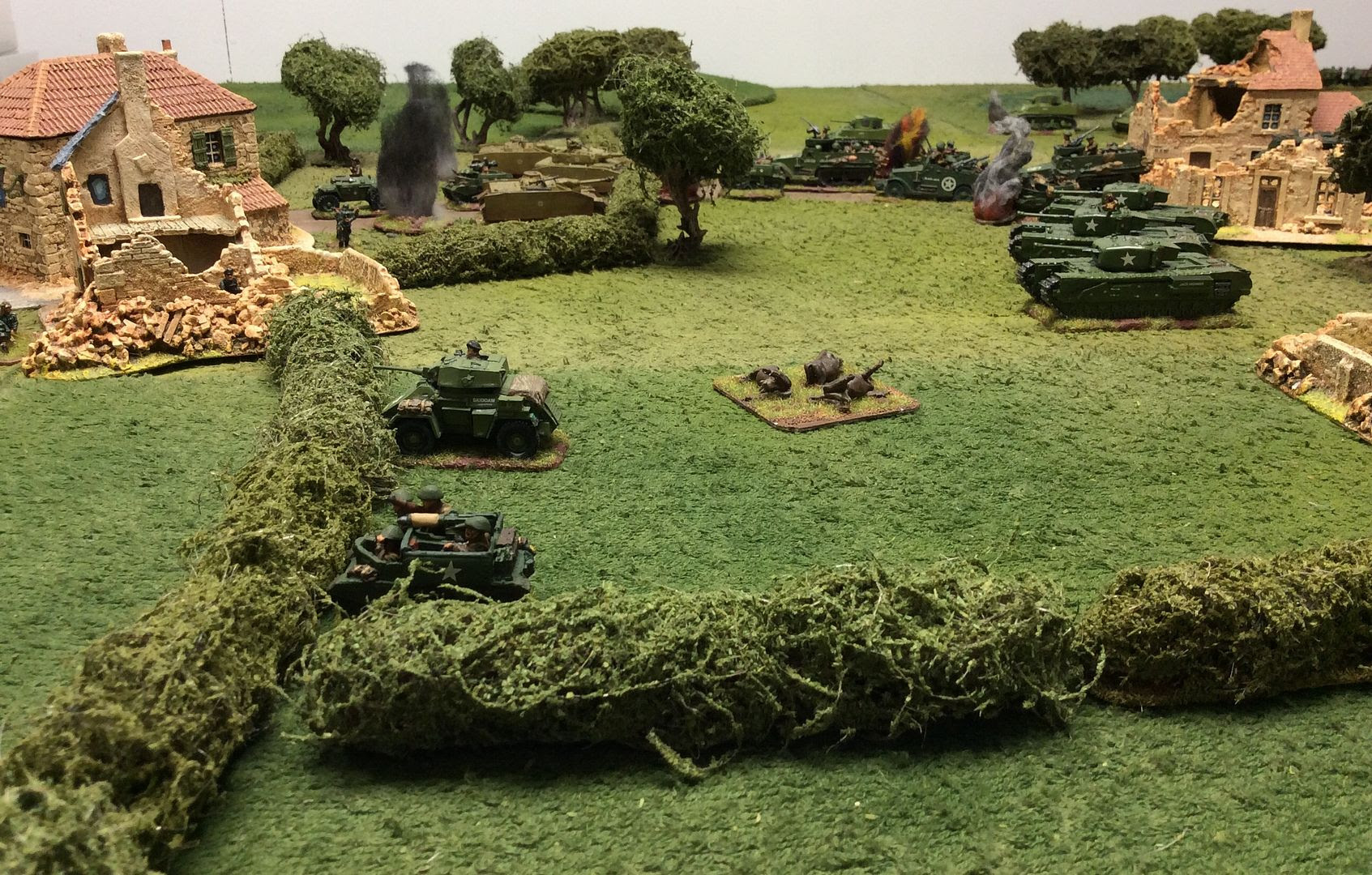 The German morale finally collapses and they leave the table in route at the conclusion of Turn 8! This leaves the British to enter the final town in triumph, leading to much celebration and consumption of wine! {Or in our case, tea and cake!} A grand game full of action and tension but, in the end, you cannot buck the dice gods can you? Well, that's my story anyway...
Next week should see another WWII bash at Phil's, but on the Eastern Front this time and using the new Cross of Iron rules I believe. Perhaps Otto Bikkel will have more luck out East? Or not... Later in the week Jon and I hope to stage a Zulu War game in honour of a certain anniversary, so pop back to see how the rejuvenated Chief Bykelezi gets on!