The Death of General Dytherin

The first game of the year: always an event I look forward to after the joys and excesses of the holiday period! Phil popped over to GHQ for the game which we had planned after our last meeting in 2015, a small French Revolutionary War game, with Phil taking the French command and myself the British. The game sees a French advanced guard trying to seize a strategically important bridge in the Flanders theatre while the British hurry a smaller force to block their advance. We would be using Black Powder for the rules.
The French force consisted of :-

The British force consisted of:-
CinC General Dytherin (8)
Cavalry Brigade(8)
10th Light Dragoons
Infantry Brigade (7)
8th Foot
27th Foot
Dunwhinggin Fencibles
Artillery Battery (6)
6lbers
With the French having the initiative, Phil ordered the 2nd Hussars to cross the bridge, as it turned out unsupported by any others bar the horse artillery. The British countered by rushing the 10th Light Dragoons forward on a "Follow Me!" order. Traversing fire by the Horse Guns proved ineffective and the charge struck home, followed by fierce hand-to-hand fighting ~

Failing a Morale Check after loosing the Melee, the French were forced to retire back over the bridge, with the 10th opting for a "Sweeping Advance" to follow up their success, hoping to put the 2nd Hussars out of the battle ~ 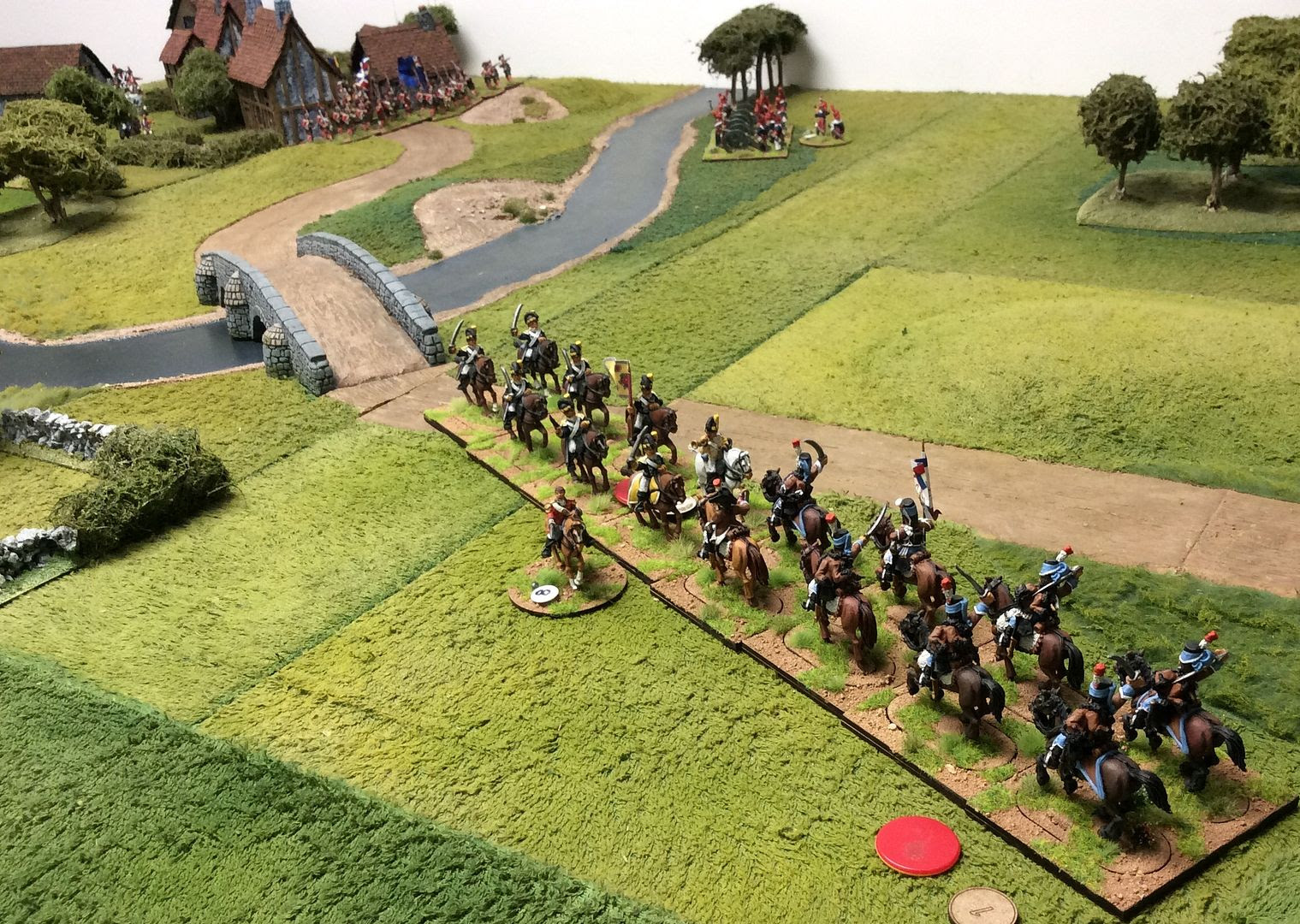 Meanwhile, with the French infantry only advancing slowly, the Dunwhinggin Fencibles had occupied the village and were threatening the French Artillery's position. {Sadly as the turns unfolded without much success!} However, the 10th were thrown back in their turn by the 2nd Hussars and further threatened by the arrival of the 10th  Chasseurs ~

While the 10th Light Dragoons struggled to reform, the 27th Foot slowly advanced to their support on the right of the British position ~ Fresh into action, the 10th Chasseurs poured across the bridge, forcing the 27th into square. Meanwhile, with the 10th Light Dragoons now out of the action, the remaining British foot suddenly seemed very loathe to advance into the fray ~ 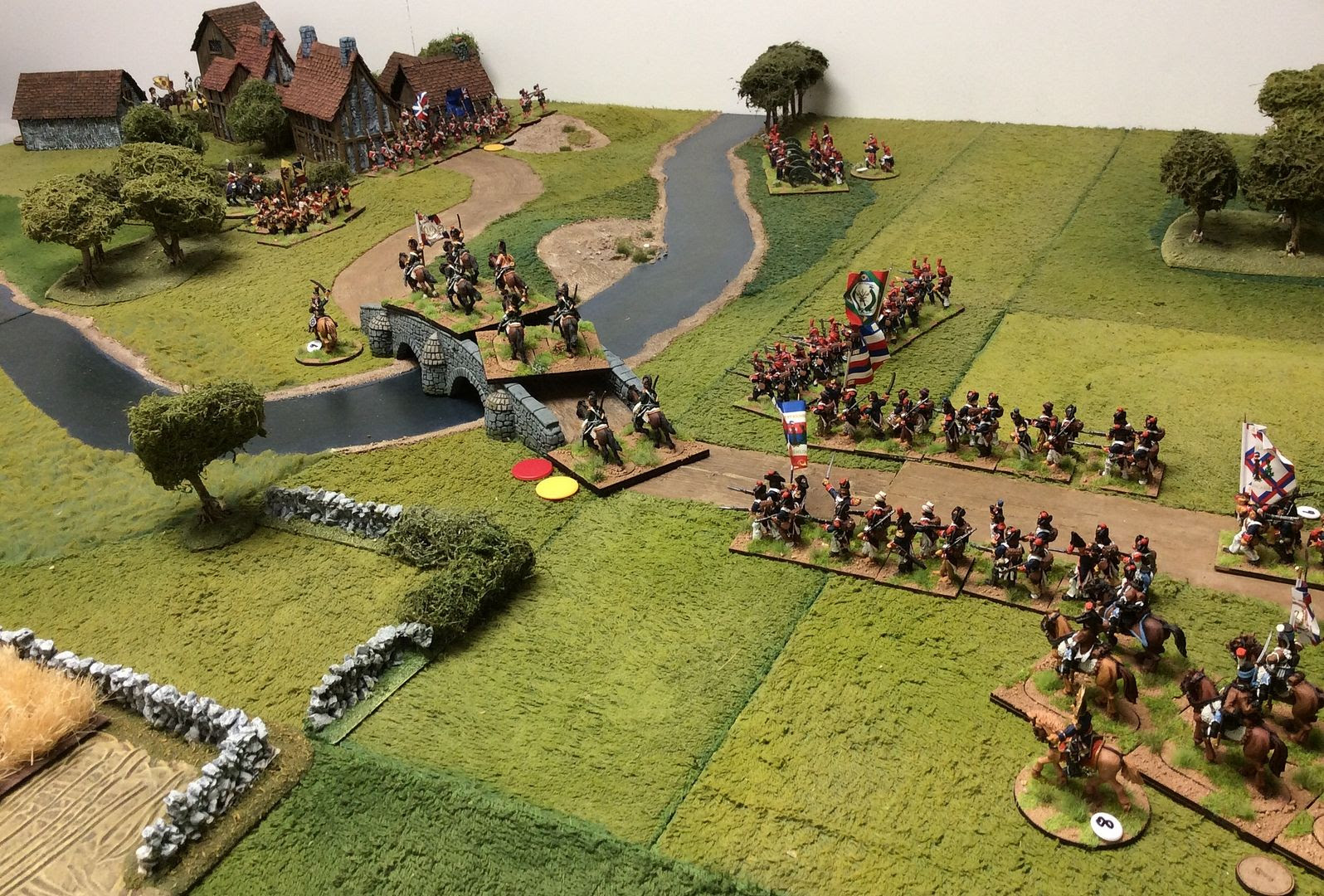 The 14th Legere, having forded the river, now advanced on the 27th's square which also suffered hits from the French artillery at last ~ 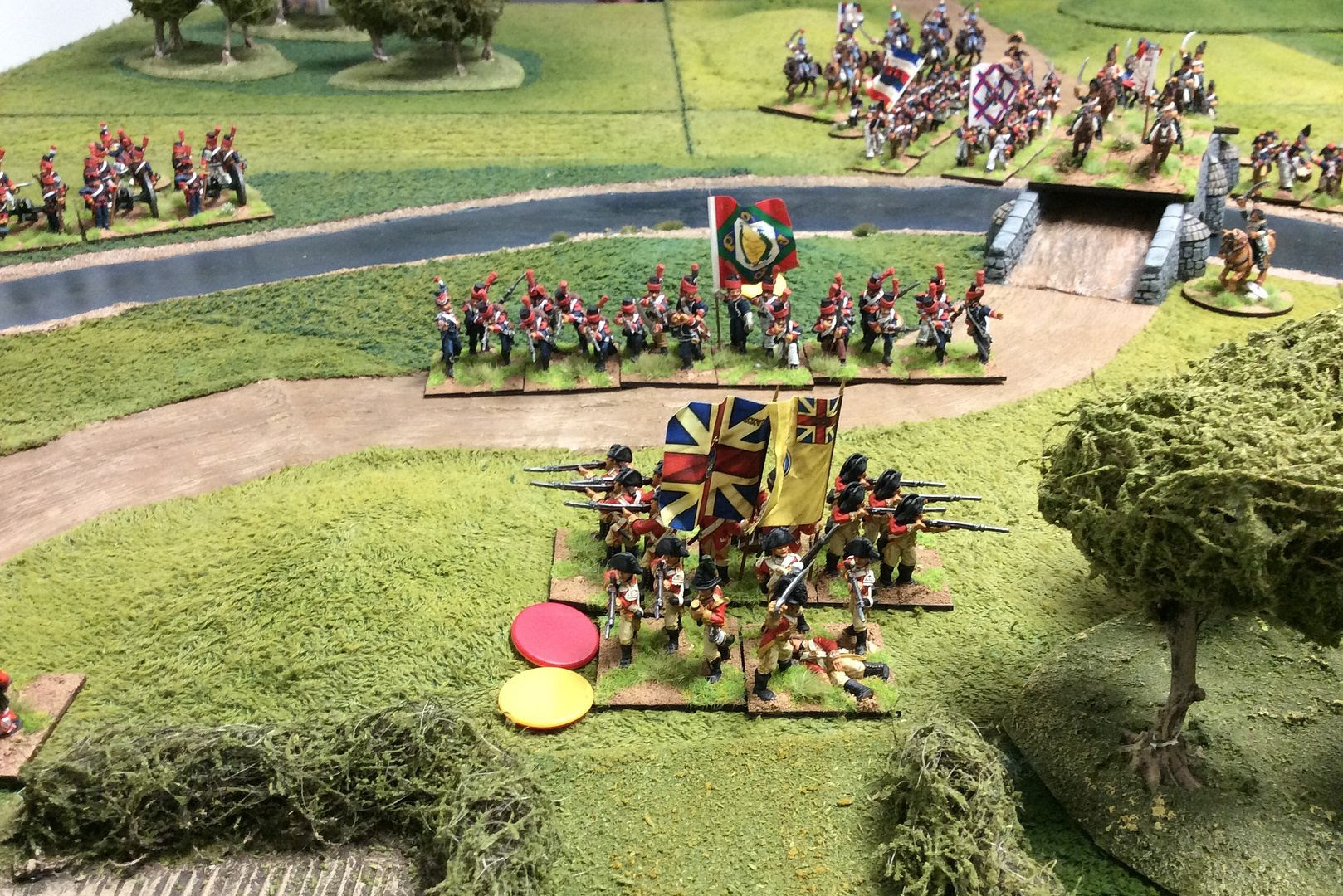 Belatedly the 8th Foot appeared on the British left, hoping to strengthen the Dunwhinggin Fencibles' resolve and finally deal with the nuisance French artillery battery ~ 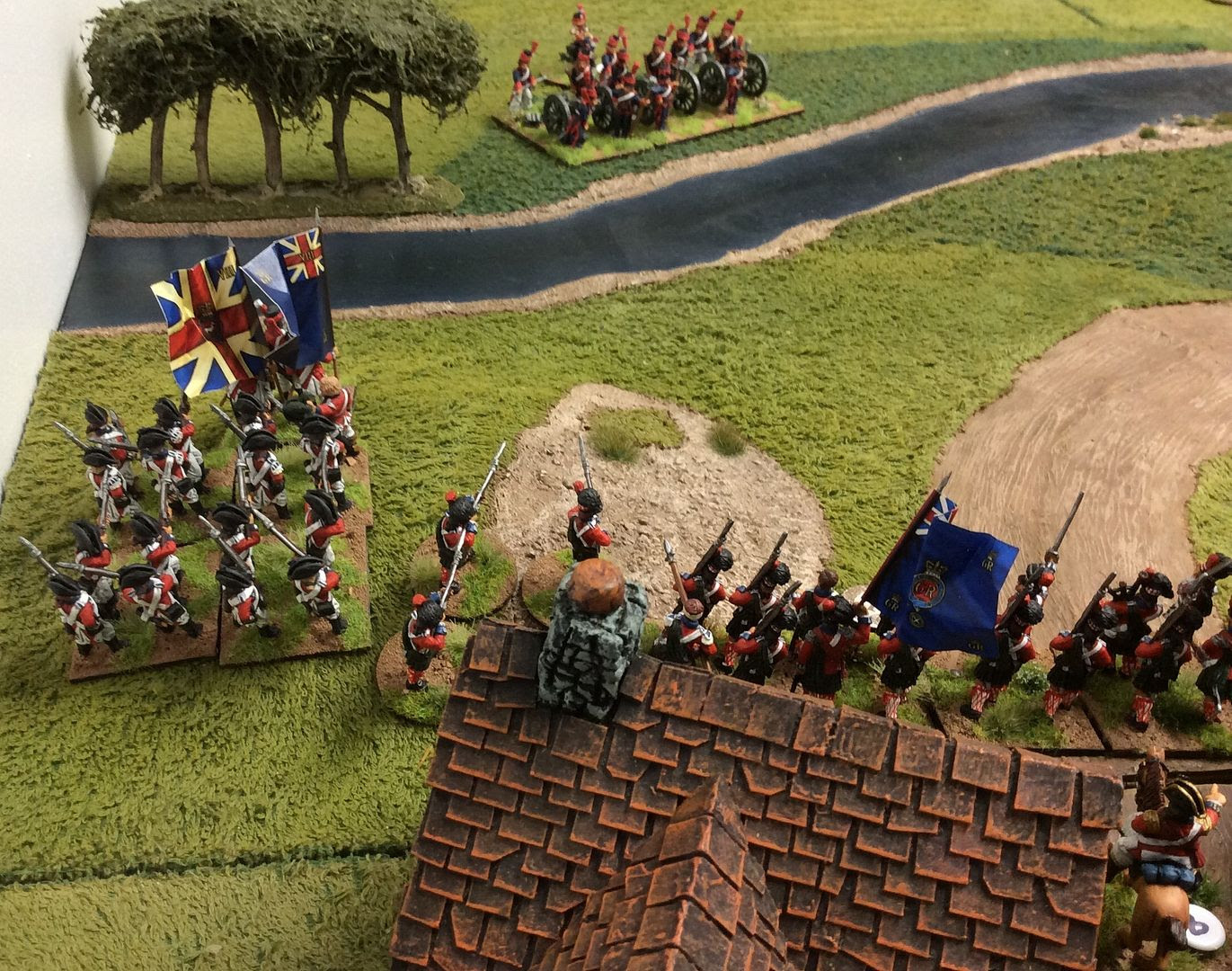 Just when things were looking up for the British, the 27th's resolve suddenly collapsed and they fled to the rear. The British right was now broken and the artillery, having eventually crossed the river to flank the bridge was very isolated and vulnerable to infantry attack ~ 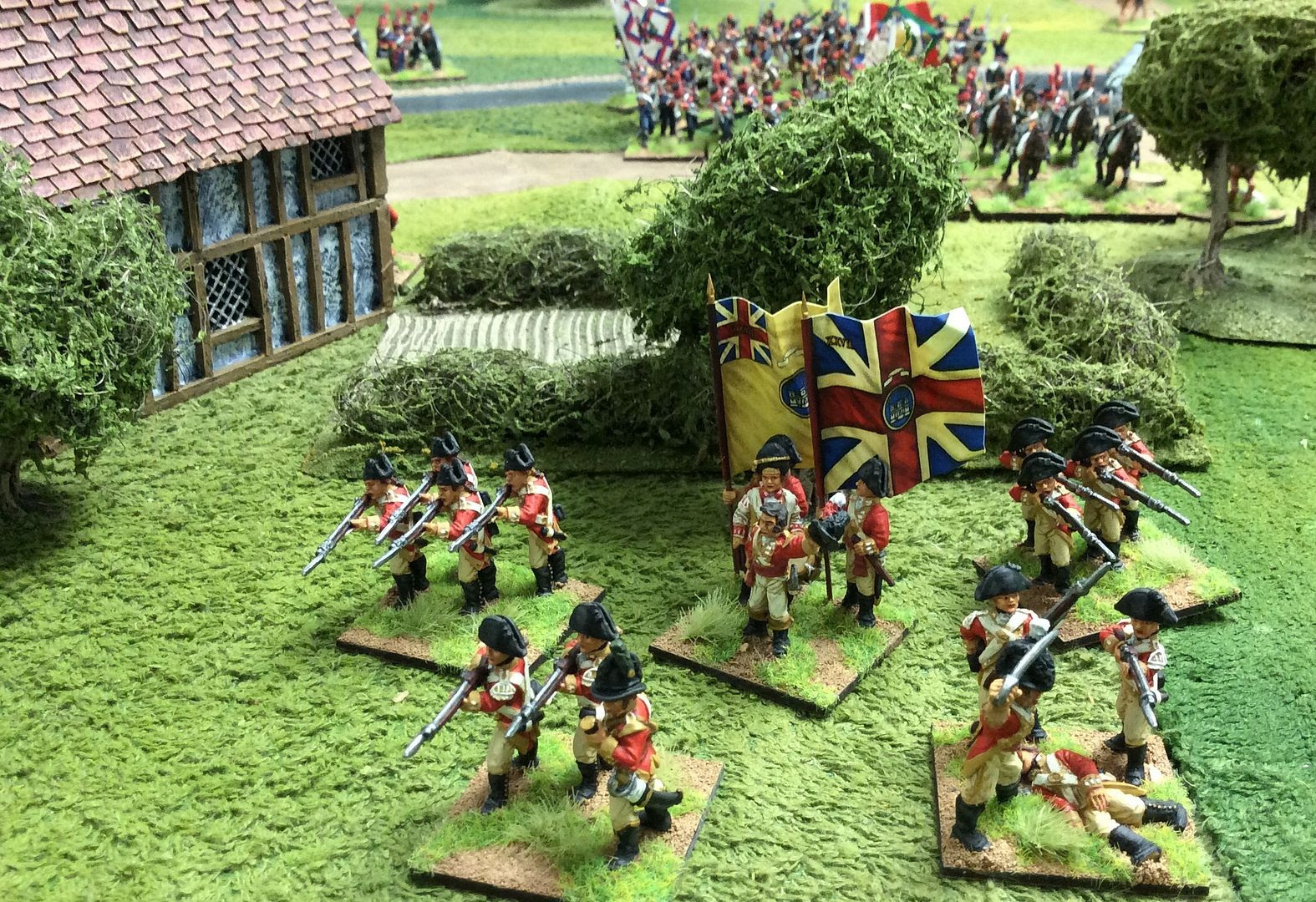 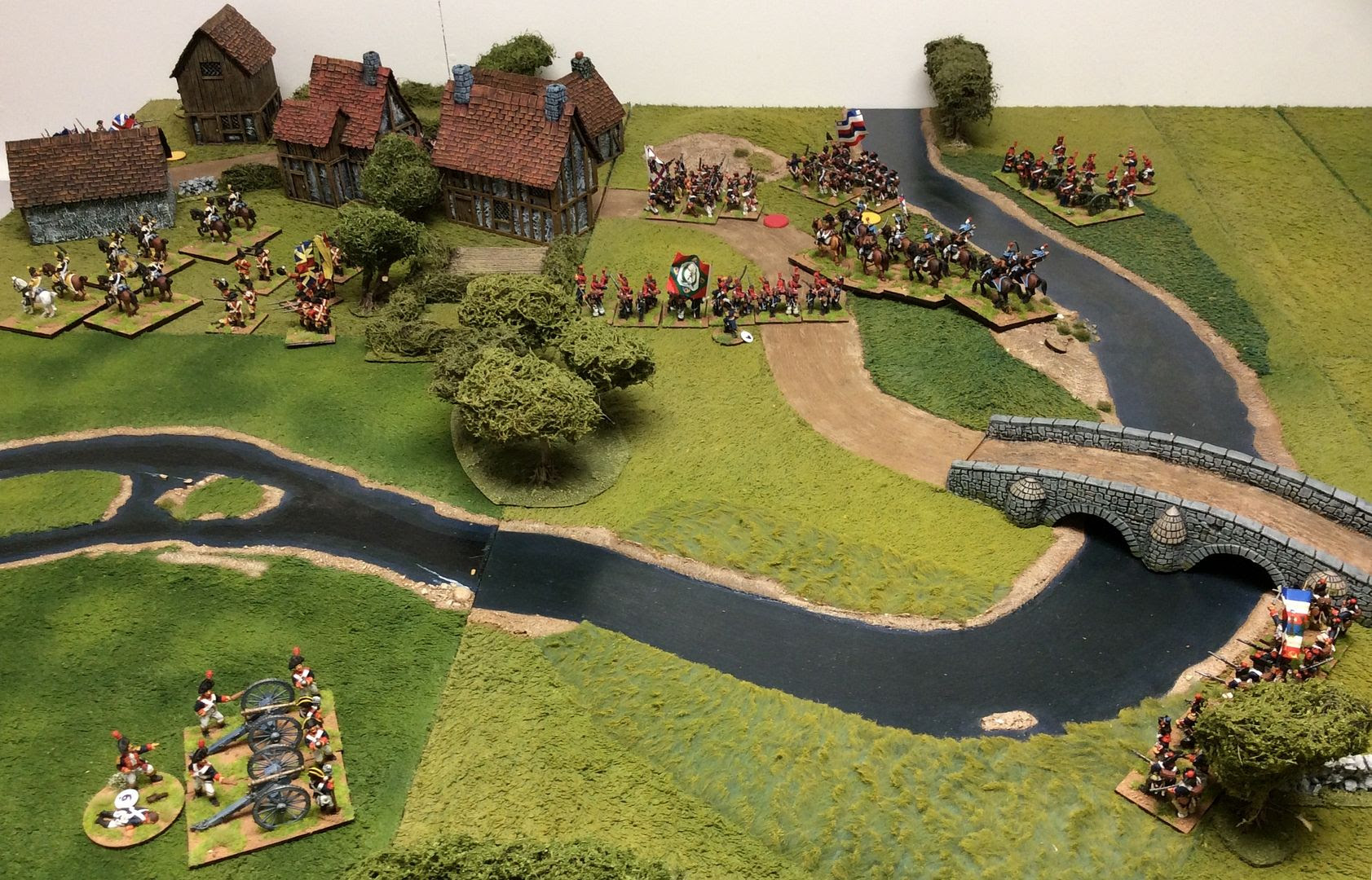 In all the chaos of battle it had hardly been noted that the CinC, the newly promoted Brigadier General Dytherin, had fallen while sheltering in the square of the 27th just before it broke! In fact the game was notable for the 'death' of several command figures, so fierce was the combat on occasions. Cavalry Brigade commanders on both sides fell in hand-to-hand combat beside the death of General Dytherin ~ 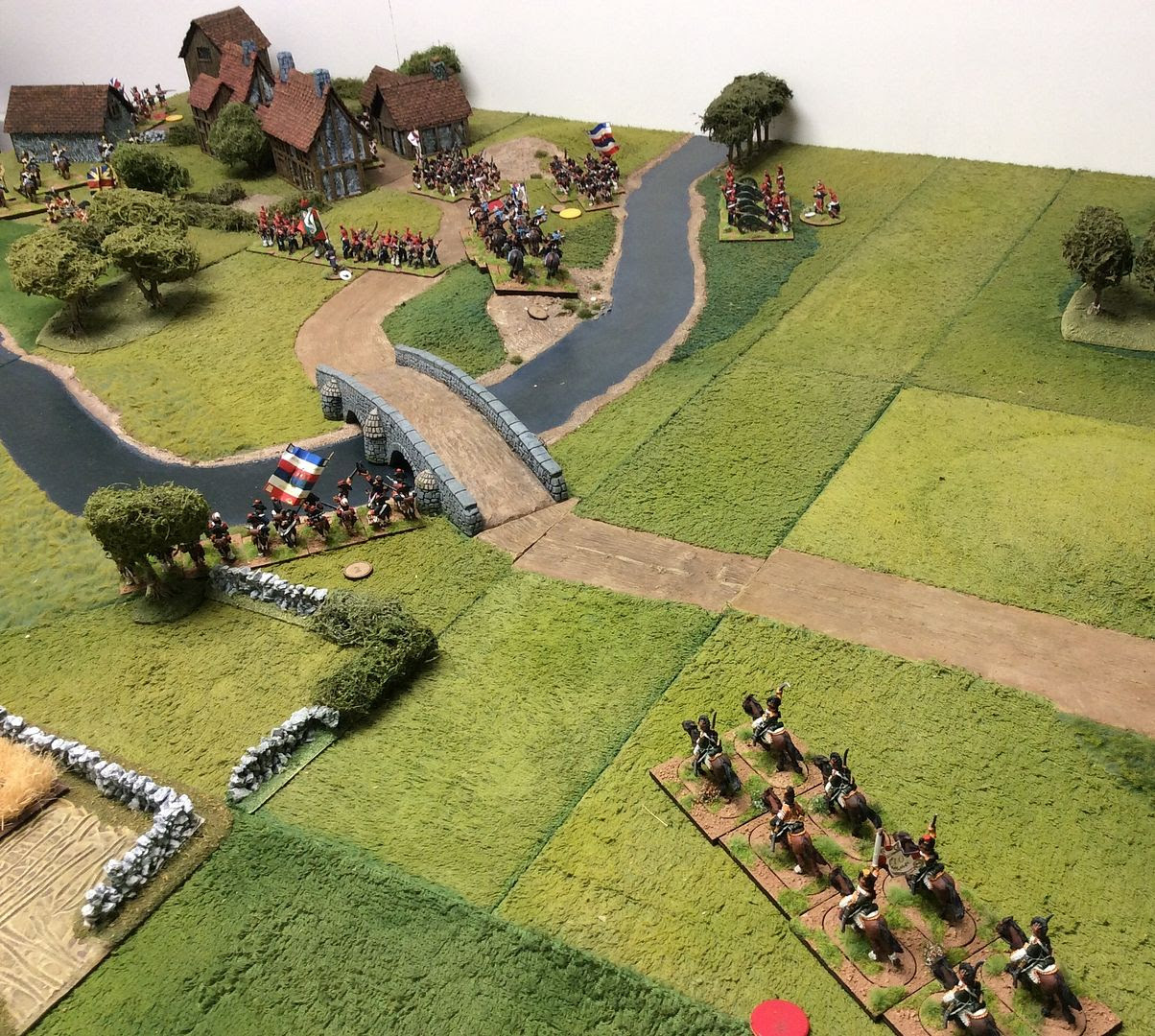 Only the Dunwhinggin Fencibles retired from the action with any credit, while the artillery galloped away to the west having hardly contributed anything to the fight! That night in camp, one private soldier was moved to verse in honour of his fallen commander ~

"The Burial of General Dytherin"
By Private William Magonagall, late of the Dunwhingging Fencibles
{With apologies to the shade of Charles Wolfe}
Not a tape was wound, nor a dice was cast,
As my troops to the rear hurried;
Not a unit discharged an effective shot
O’er the board where our 'hero' was buried.

We buried him sadly in Turn 11,
not in playsheet nor rule book we wound him,
Still he lay a warrior taking his rest,
With his miliput cloak around him.
But all of his gaming now was done
With the whole of his force now retiring;
And drums beat the call that our game was done
For my chum had now to be going.

Slowly and sadly I sat me down,
Fresh from the field of my 'glory';
I'll write but a line, and gain no' fame',
But reflect on my own on the story.

On Thursday Jon is due in GHQ and we shall fight a follow up to this epic encounter, when the Austrian allies will march to the echo of the guns and seek to throw the French out of their hard won bridgehead! Oh, and no 'poetry', I promise!