As I am in full flow at the present with my ongoing Wars of the French Revolution project, I set up a game for my latest tabletop encounter with Jon, our first of the year as it happens, which loosely followed on from last week's game with Phil. The scenario is set following on from General Dytherin's recent demise, and his force's failure to halt the wild Revolutionary hordes. It sees the Austrian commander, the ageing General Karl Meztitzoop, marching to block French reinforcements keen to exploit the bridgehead so recently seized. He has at his disposal a Brigade of Heavy Cavalry, a Brigade of Infantry, a Brigade of Light Troops, and a battery of 12lb guns. His plan is to force a crossing of the river on the French flank with his line infantry to engage the enemy's infanrtry, while commanding the approach to the bridge with his Light Troops and artillery, leaving the Heavies to threaten the French approach rout. The initial force available to the French to hold their gains is that which successfully seized the bridgehead in the last game. Reinforcements of four Infantry battalions and a battery of Foot Artillery are marching to their aid, entering the table potentially after Turn 2. Sadly, the Brigade's commander has a low rating of only 6 making their arrival far from sure. In the eventuality of their failing to march to the sound of the guns after Turn 5 they are belatedly joined by General Le Blanc, command rating 9, for a better chance of arriving in the nick of time! The game is set at our usual 12 Turns.

At first the Austrian plan seems to be going well. The enemy infantry is all drawn to defend the crossing point while the Austrians superior fire helps to whittle down the French infantry, weakening them for the attack with the bayonet! 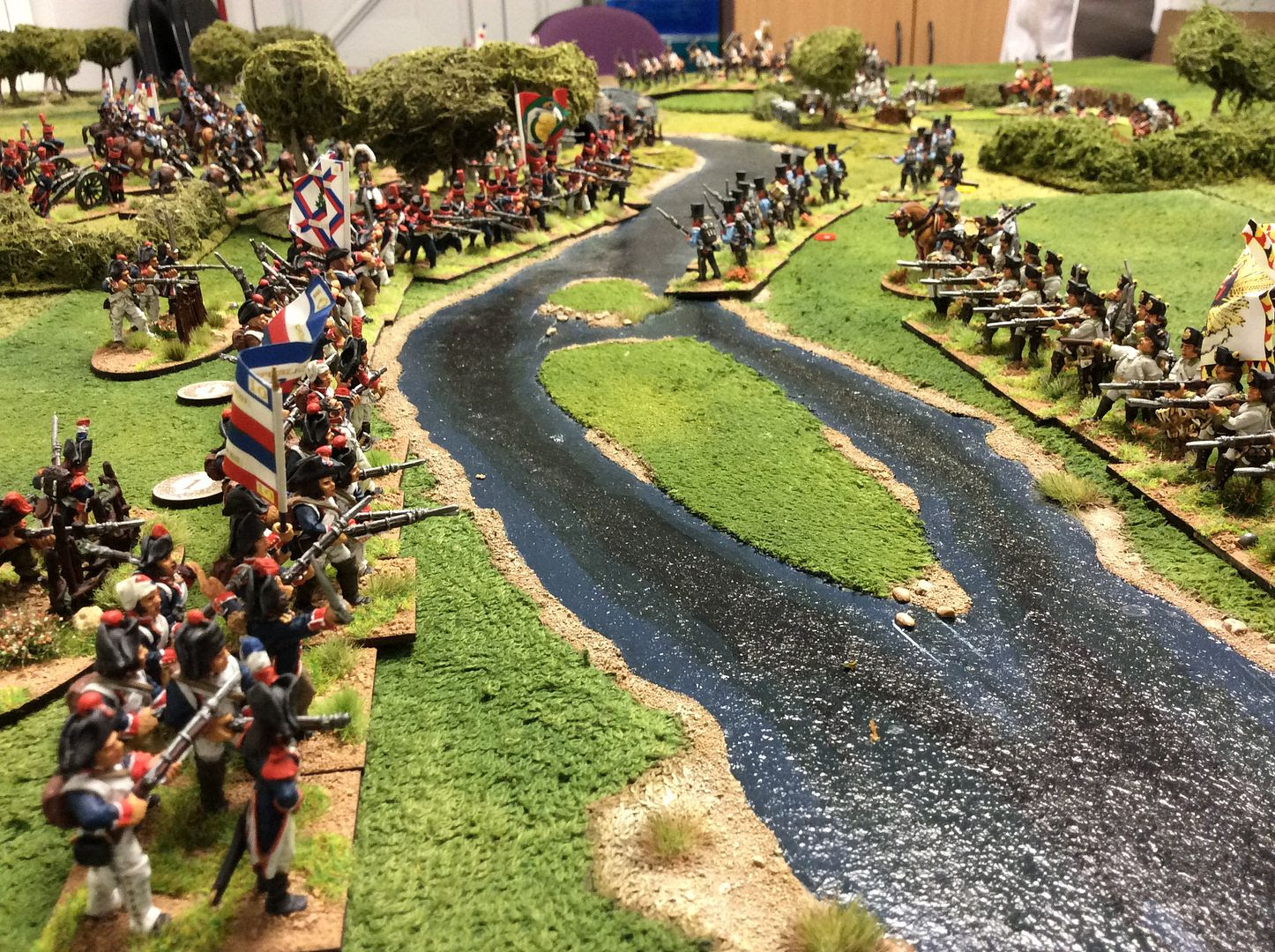 The French commander is forced to sacrifice his Light Cavalry Brigade in a charge to halt the Austrian Cuirassiers who are moving to seize the bridge. In fierce hand to hand fighting both sides become 'Shaken' and have to test their morale. The cuirassiers withdraw 'Disordered' but the French are hurled back two moves and are also 'Disordered'. Austrian Grenadiers march forward to deny the bridge to the French reinforcements as they eventually arrive! 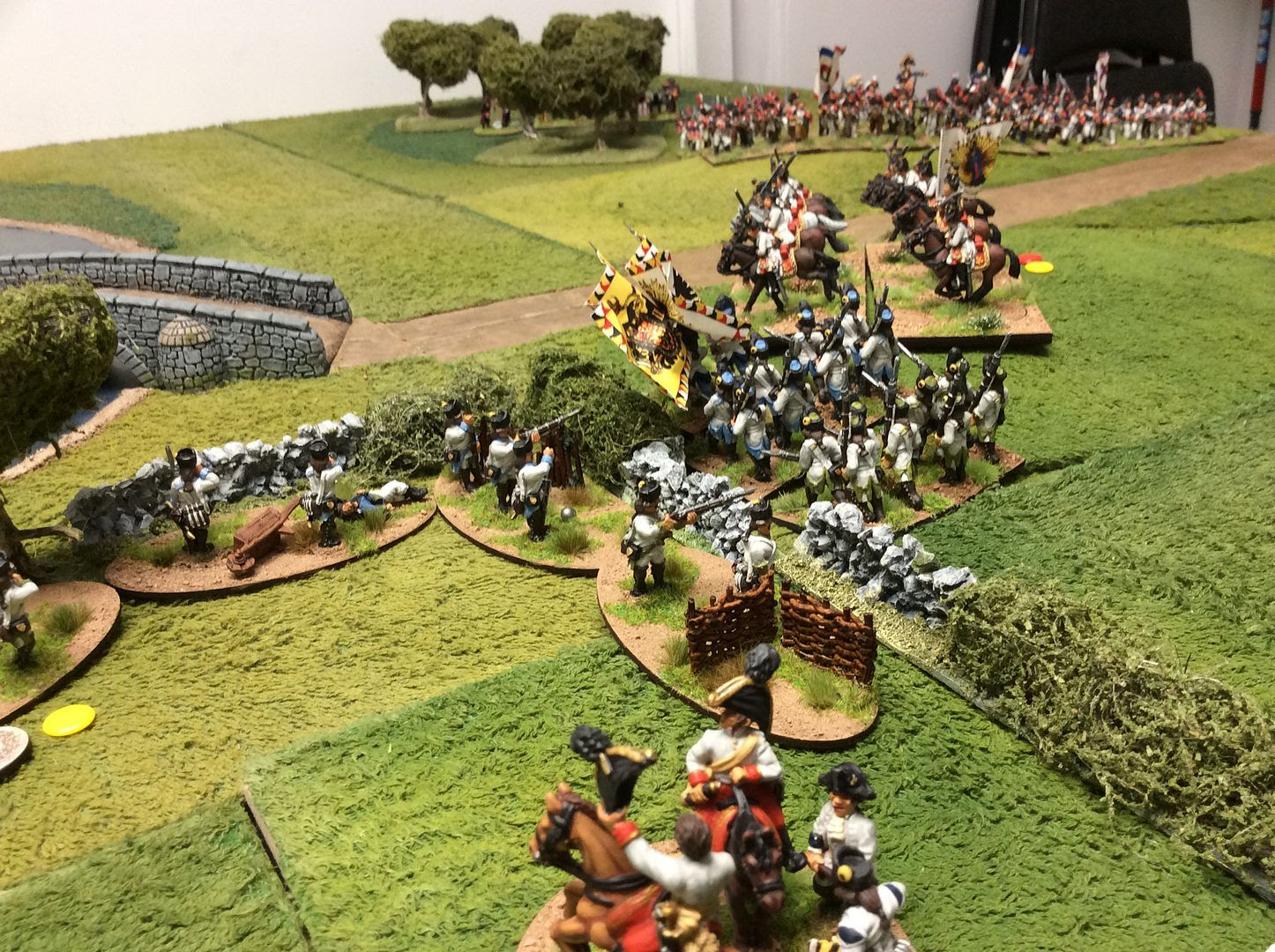 Le Blanc finally arrives on the battlefield and hastily deploys his brigade to meet the Austrian threat. Sadly his artillery are nowhere to be seen and the Austrian Dragoons are threatening a charge on his left hand Battalion! 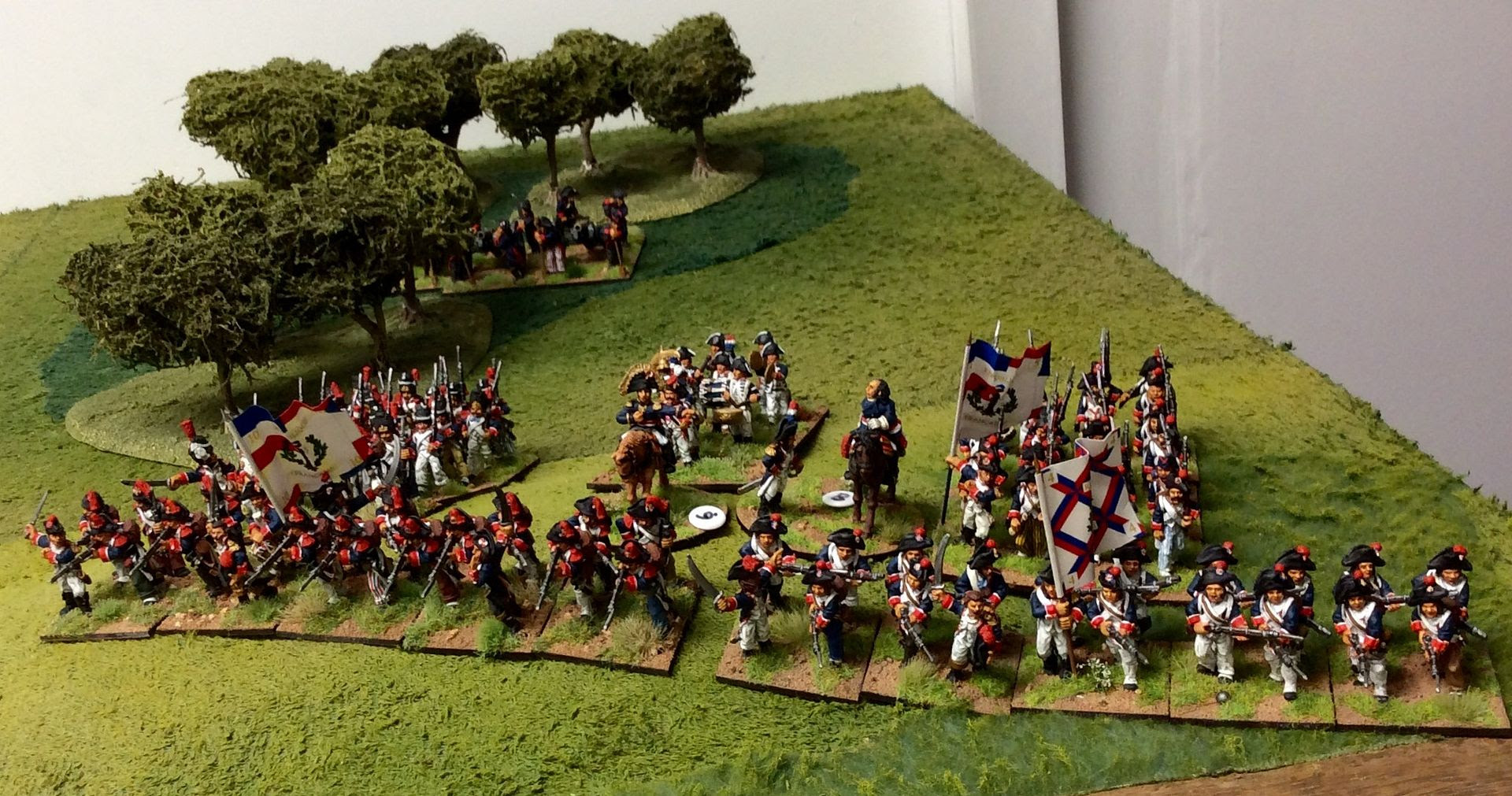 The Dragoons spur their mounts forward, the ground reverberates under the weight of their charge and, despite heavy French fire, they crash into the mass of French infantry! The Austrians sense blood and set to with gusto to cut the French down! 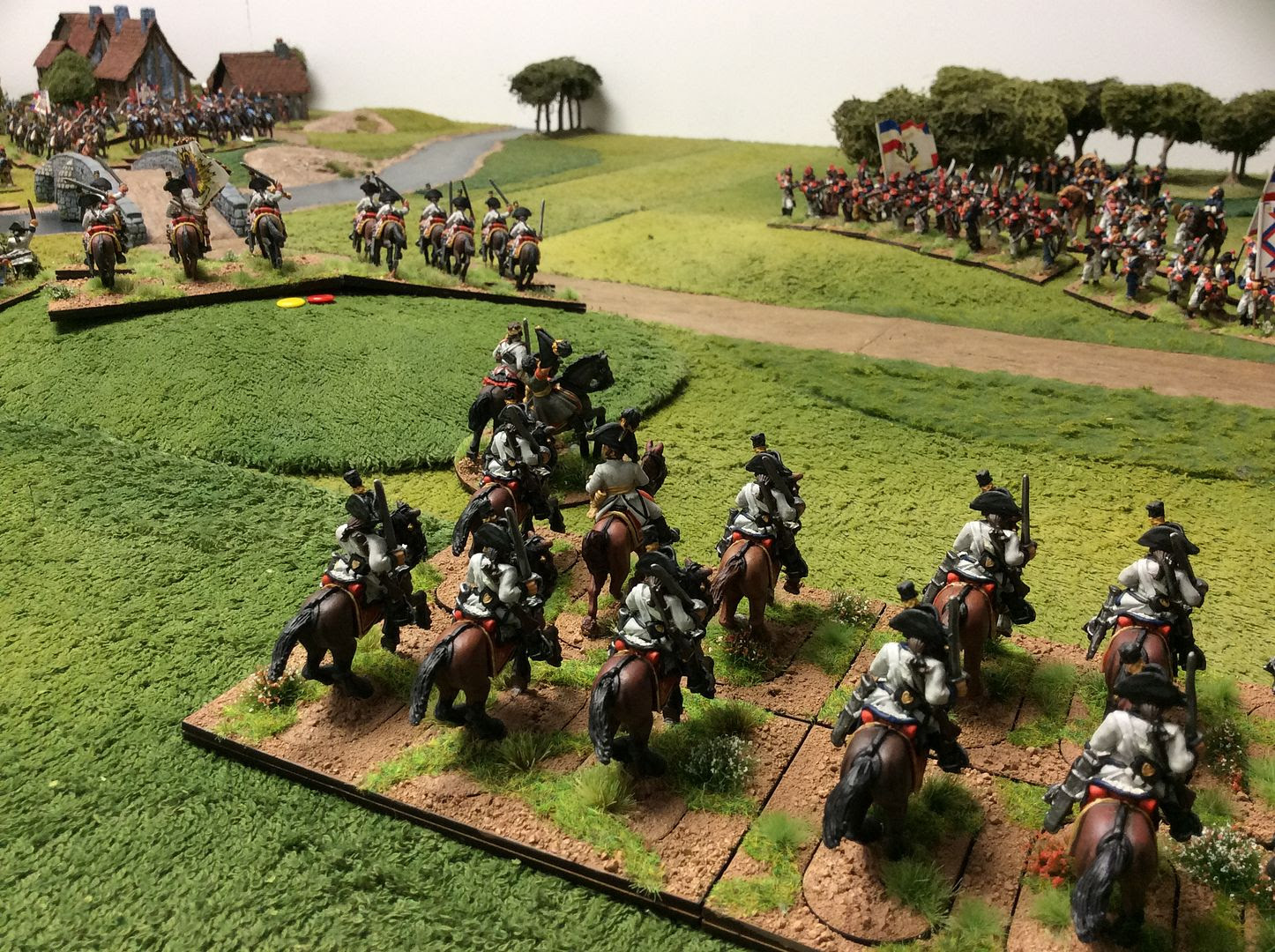 Just when it was all going well and victory was within their grasp, the Austrians seemed to loose heart! The line infantry were driven back over the river by a wild French charge; the Chassuers rallied and moved to attack the Cuirassiers once more; while the Dragoons were inexplicably beaten off by the French masses! {That is to say, my dice luck finally deserted me and Jon's came good with a vengeance!} 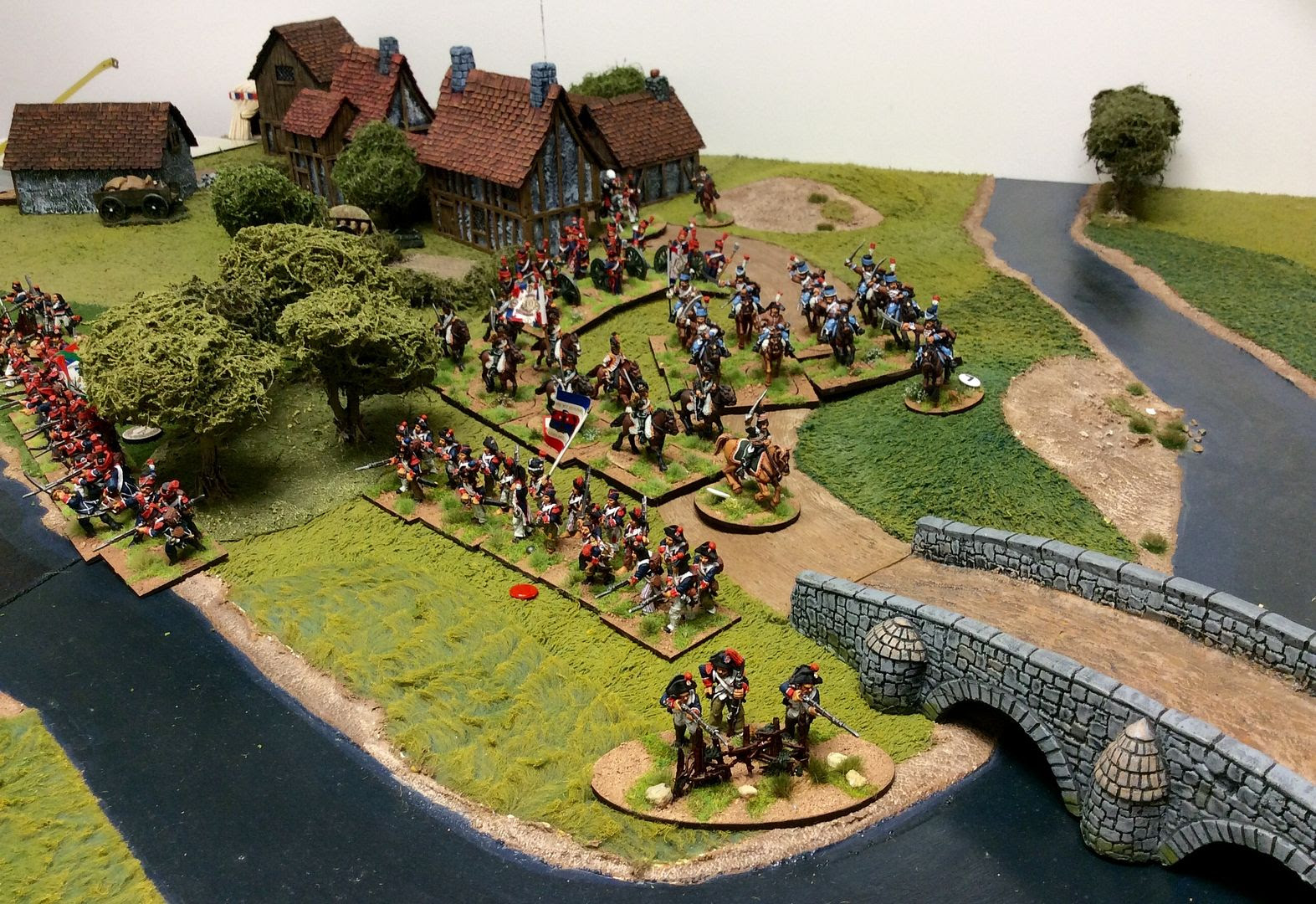 Despite a courageous manoeuvre by the Austrian Grenadiers, taking the French massed infantry in their flank, it was to prove too little too late. The Austrian army collapsed and fled the field leaving the French victorious! 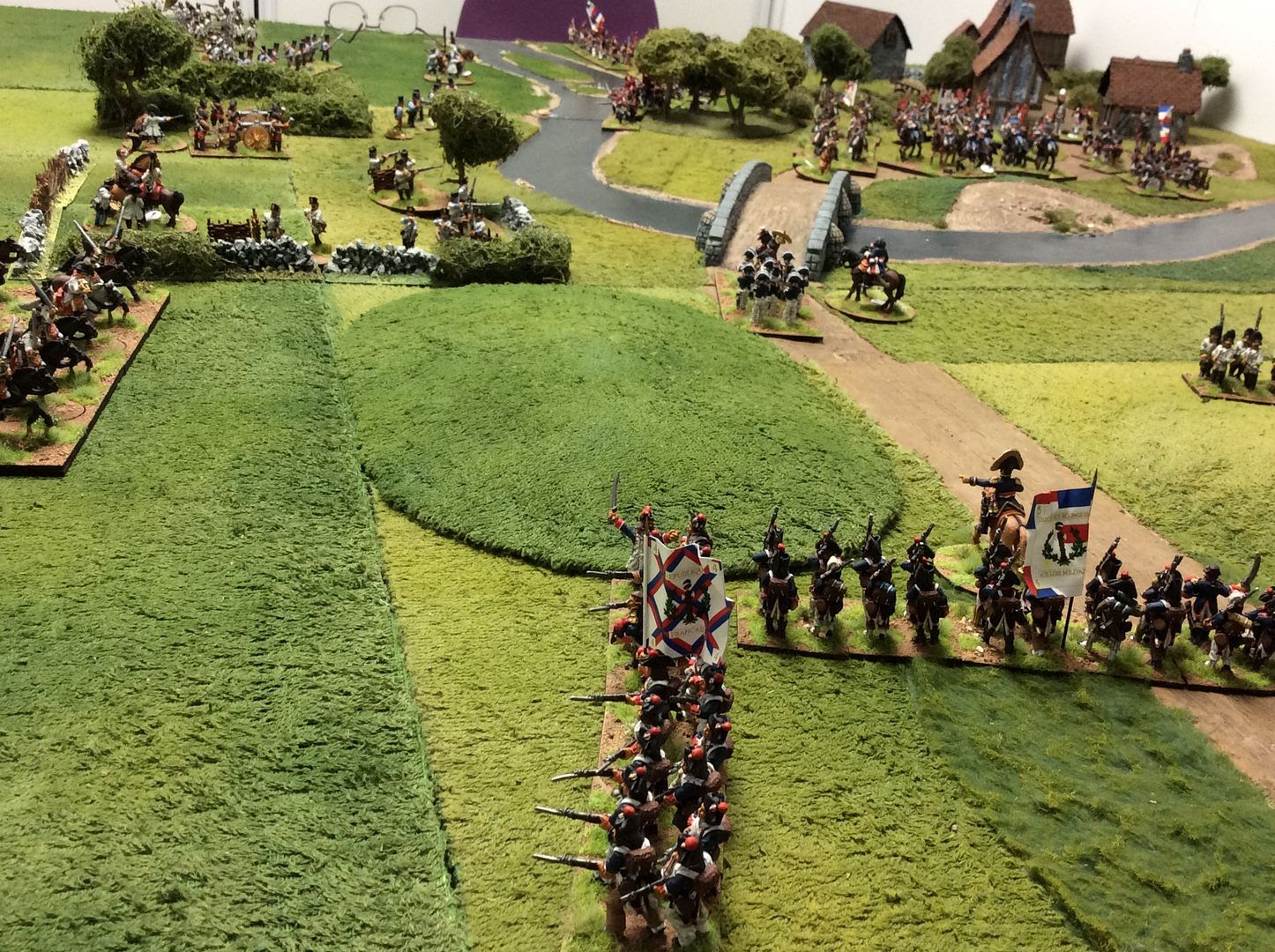 To the stiring tune of Le Marseillaise, Le Blanc crosses the bridge to greet the commander of the bridgehead force and offer his congratulations for a job well done. The Austrians withdraw to regroup and refit ready for the coming decisive encounter when, with their ally, the Grand Old Duke of York himself, they will finally drive the French from the field! Or not... 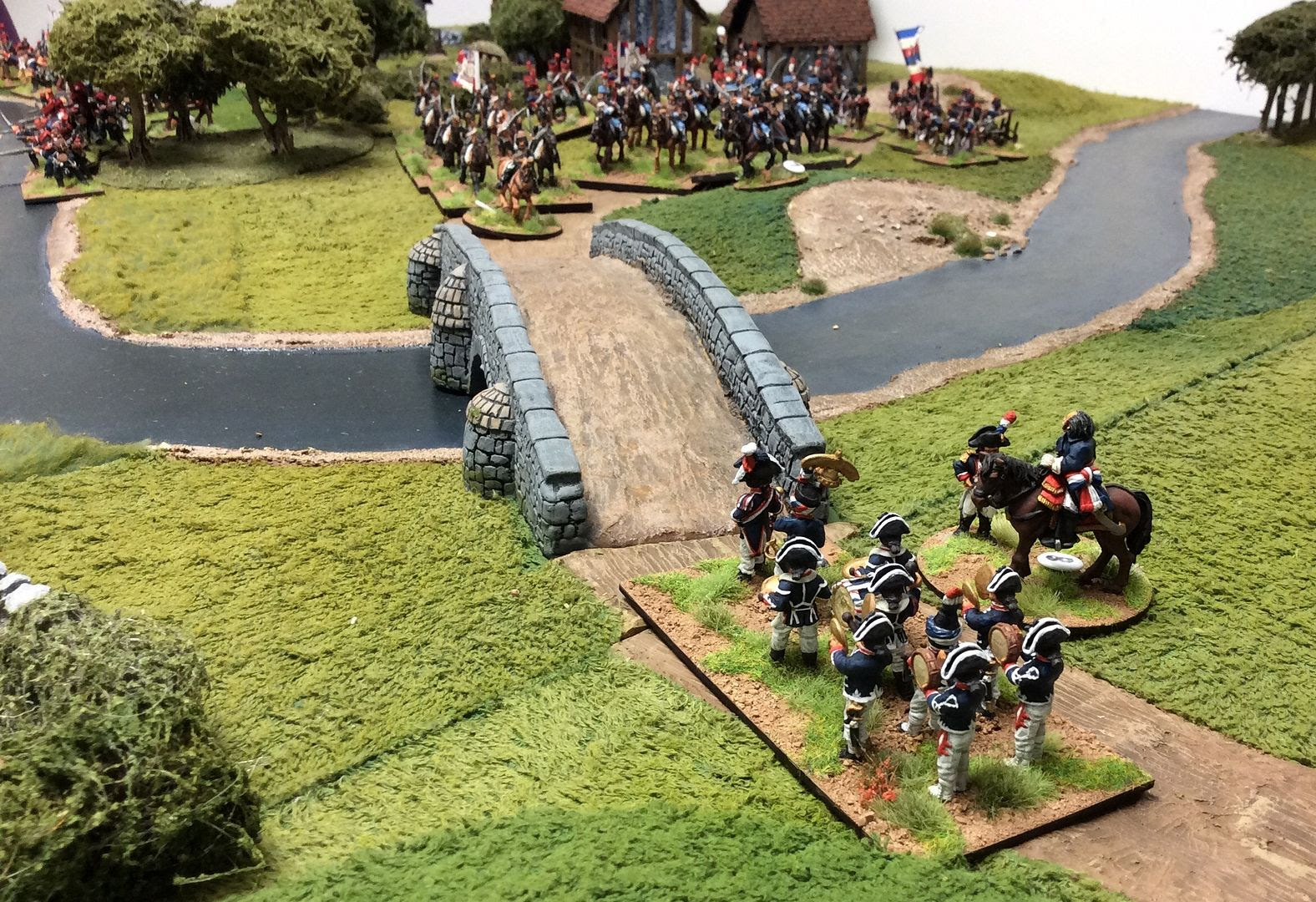 The battle should be fought out next Monday when Phil will inherit the French command here in GHQ and I will take the Allies and seek to reverse my recent defeats!
Posted by David at 03:27