Determined to crack on with the additional horsemen for the army of Typoo Bhyka I have been working on the second such new addition. These are once again the venerable Wargames Foundry Sikh Wars figures, armed on this occasion with tulwaar and dhal. I found the figures' pose rather staid for wild tribal horsemen and so decided to render them as a Regular cavalry regiment. Again the unit comprises three bases of three figures each ~ 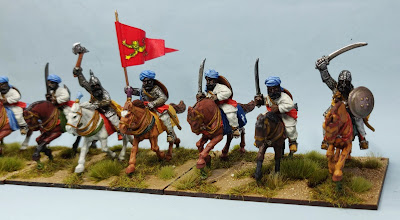 The third new acquisition of horsemen for the project are the newer Perry Miniatures Afghan cavalry from their Victoria's Little Wars range. They are not next in the queue to pass under the brush though, that honour falls to an E.I.C. Regular Infantry unit for the 1st brigade.