I was just thinking...

...apropos of nothing in particular, but hobby and personal stuff in general rather. I suppose in part it was all pushed to the fore in my thoughts by a visit recently to the National Trust's Wightwick Manor to meet up with Phil and Charles for a socially distanced - God how I hate all this coronavirus malarky - coffee and chat. Chewing the hobby fat is one of the mainstays of our hobby I would maintain, whether over the table during a game, at a club night in general, but perhaps more importantly when meeting one's wider circle of friends at one of the many wargames shows across the country.

Well obviously, for most of us here in the UK at least, all of these have been hit on the head by various Borisbans over the last seven months or more. Many folk of course have found ingenious ways around this enforced hobby solitude, most innovatively via online games hosted through technology available via zoom and the like. So I'm sure like me you've followed game reports from Phil, Matt and Colin for example highlighting games they've staged as the months have dawdled by. You may even have been able to participate in such games yourself, unlike me of course as regular visitors to my blog will of course have noticed over the last few months.

It's well over seven months now since the last face to face game staged here in GHQ. As a profoundly hearing impaired wargamer Zoomed games, lacking subtitles, are not possible, as I couldn't hear anything said to me, necessary for playing the game of course! That extends to chatting over the phone or via Duo and it's ilk too. In short I could easily be described as a true Billy No Mates for the duration! That is were it not for three lifelines that have sustained me when the old black dog has drawn near or threatened to hang around too long: that is, the rich vein of fellow gamers' online blogs and forum boards;  my monthly hobby boost provided by Wargames Illustrated; both supplemented by text chats with Matt, Phil, Jon, Kevin and Dan (at Wargames Illustrated) . Without these I doubt I would have got through all the attendant malarchy sustained just by the creative elements of the hobby in the form of painting, modelling and planning! I'm still here, still enthused by our marvellous hobby and sustained by family and good friends! Thank you all! Roll on 17 May when the first game here in GHQ will burst into life I hope! A Punic Wars debut for Coronus Cunctator(Phil) against Hannibal Bicca(yours truly) with the two new armies painted under conditions I hope never  to have to encounter again! 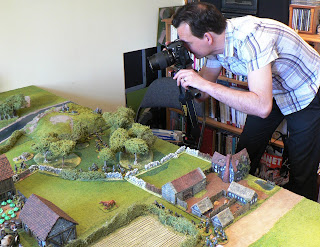 Dan hard at it in GHQ MK1 taking pictures to accompany one of the two articles I provided for WI's 300th celebratory issue. 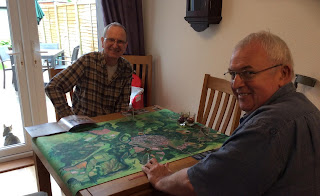 Phil handing out another thrashing the last time I was hors de combat, thanks to my hip replacement! 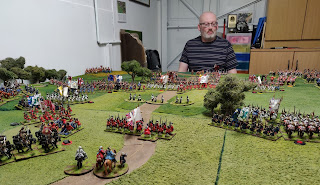 Lord Walton/Jon surveying the field with his usual skill prior to giving me another beating I expect. 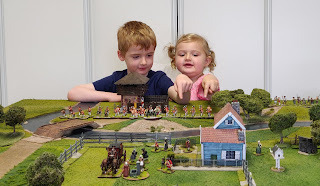 The next generation of enthusiasts in the form of two of our grandchildren, William and Emma. Probably the only important contribution I may have made to our hobby.