My latest figure additions are a unit of Foundry Miniatures AWI British Line Infantry in firing pose, painted to represent the 43rd Foot with white facings. I chose these because I had the flag in house so I saved a few pounds. Back in the day when I started my AWI collection I bought two Army Deals from Front Rank at Salute, when it was still held in Kensington Town Hall. I added further units from the same manufacturer over time until the collection reached a state which suited the scale of our games. Fast forward a few years and Perry Miniatures began to add an AWI range, following on from the range started for Foundry, of which this unit is an example of the latter ~ 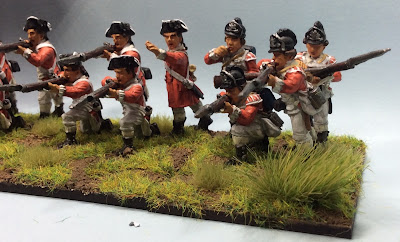 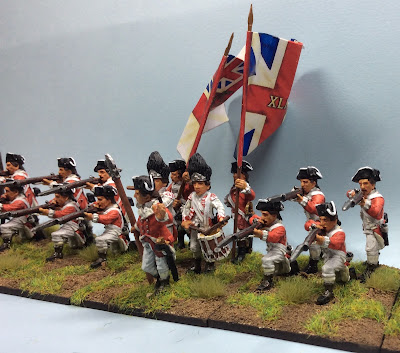 My expanded collection now includes figures by Foundry, Front Rank, Perry Miniatures and a few Old Glory. When I decided further expansion was needed for the bigger gaming area in GHQ2 I chose to add two units of American Militia and two of British Infantry from the Foundry range. This is the last of those four units. The flags are ones I downloaded free awhile ago, now sold by Warfare Miniatures I think.
I still have two units of Continental Infantry from the same manufacturer and some Perry Miniatures British Light Dragoons. I've started on the first Continental line, the 4th Virginia, and I hope to work on completing at least those next month and see if I can get an expanded game in in December. We shall see...
What I have noticed though is that the combination of arthritis in my right hand and the cataracts developing in both eyes has meant that my finished work does n't really stand up to close examination, as you can see from the pictures. But, the process still brings me some pleasure and on the table I don't think anyone will really notice, so ‘Onward and Upward!'
Posted by David at 09:11