Since finishing the unit of Regular Cavalry for Typoo Bhyka's army I decided I couldn't face another nine horses! So, back to the E.I.C.'s Army of Pendawar in the shape of their sole British Regular Infantry Battalion. It will take me more than a little while to work through the 24 Perry Miniatures figures which comprise the unit, plus the single Foundry officer I've added from the spares in the Lead Pimple! I had intended them to be the South Staffordshire lads of the 38th  but a recent release by Flags of War has caused me to revise that plan. I'll have more to say about this decision when the figures are all finished in due course.

In the meantime I've taken a picture of all the figures I've completed so far for Typoo Bhyka's army. They fill one 7 litre Really Useful Box, more or less ~ 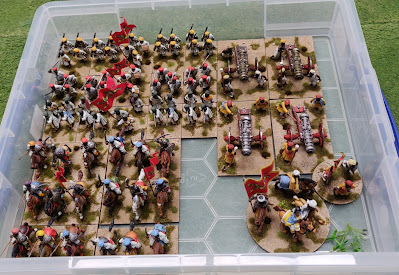 The space should be filled by the missing three cavalry bases, giving a total of the nine cavalry I mentioned, though that will probably be later in the summer now I expect.

Now that the petty fogging restrictions on our basic rights are being relaxed Sue and I have been out and about more. Recently we met her brother Martin for lunch. We'd not been able to meet for 15 months as his wife had MND and was shielding. Sadly she passed away earlier in the spring, so not attending the funeral due to restrictions it was our first face to face encounter.

After lunch at the Mytton and Mermaid we went across the road to visit Attingham; even though the house was closed the grounds, cafe and book shop were open! I bought a book for £2. I greatly enjoyed his The White Mughals, which set me on the way with my Tales from Pendawar project, so I thought this might reignite my interest in the Mutiny where Typoo's army can easily be assimilated into the Mutineers' army. 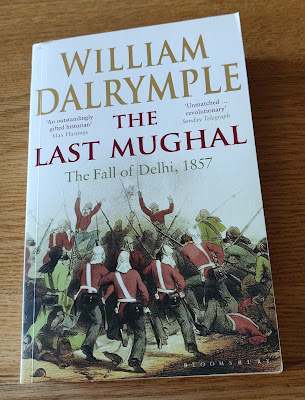 Enough of my whittering on for the present, when all is said and done this will not get me any more paint on the figures waiting patiently on my desk here in GHQ. As we edge ever closer to a return to normal life, as we all earnestly wish to see, the first sign here should be next Monday's game with Phil here in GHQ and the following AAR!