...the regular infantry receive reinforcements in the shape of over-strength Grenadier companies. These are more Redoubt Enterprises' figures, nice large chaps making painting relatively straightforward. Sadly, there were some issues with the casting, seemingly the molds need some attention as sword hilts and scabbards  are misshapen on some figures. Notwithstanding this issue, the chaps came out fine in the end I think ~

Just for variety when painting these I chose one pack in tricorns and one in bearskins. Of course the poses chosen match those of the fusiliers for the look of the game. The larger 80x50 bases were chosen both to utilise the six figures in a pack and to facilitate the two bases being combined to give an extra Regular sized unit in our games. 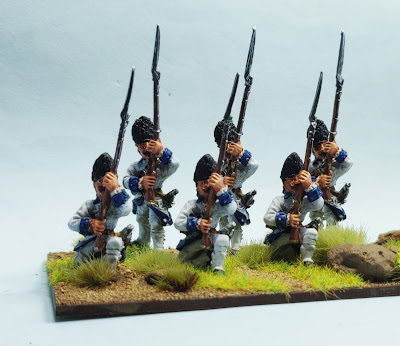 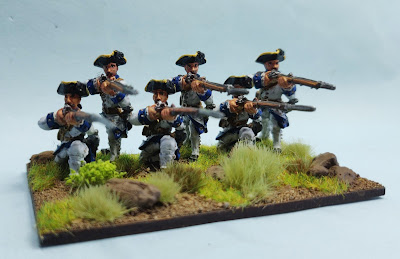 The remaining figures I purchased for this phase of expansion for the French & Indian War project are all cleaned up and spray undercoated white ready to start. They comprise the Compagnies Franches de la Marine for the forces of New France, using more Redoubt Enterprises figures, while for the British there are a second company of Light Infantry and two warbands of Stockbridge natives, the former using Redoubt Enterprises figures, the latter my first figures from Galloping Major. I hope that all things being equal I shall have completed all of these by the end of August, R&R breaks somewhat eating into potential painting time at this time of year of course.

While on the subject of French forces of the SYW period you'll not be surprised that I took advantage of the recent Foundry Jubilee Sale to add figures to my main SYW collection. The Line infantry Regiments in the distinctive while coats will each have a Grenadier company added to their number, while a further regiment will muster into the line also. In addition extra figures will mean the 12 figure Line cavalry and Dragoon regiments can be reorganised into 8 figure regiments.