Following on from my 'Billy No Mates' post, see previous Blog entry, I've been plodding on painting six Perry Miniatures figures to represent the 16th Light Dragoons for my AWI British collection. I find their figures very hard on my brushes, having so many sharp edges, in comparison to those they made back in the day for Wargames Foundry. But, things move on, so there is little point in whinging overmuch about it. I'll just add some extra brushes to my shopping list for Warfare the weekend after next. 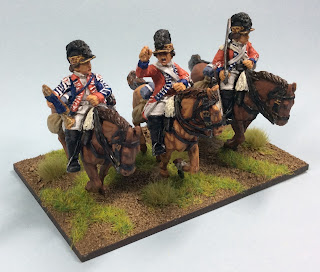 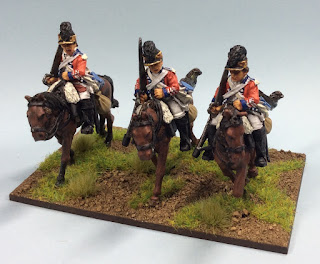 While I'm on the subject of a good moan: I've recently had not one but two hobby mail order purchases fail to arrive. Firstly from Foundry, which they replaced without too much fuss I might add, and secondly from Flags of War, also promptly replaced. Now, one loss I might accept as MIA, but not two so close together. With an ever changing postman/woman on our walk it does make you wonder...

Returning to the replaced Foundry order, I've acquired more of their Perry sculpted AWI figures: six Continental Dragoons; another unit of Continental Infantry; and finally, a unit of uniformed Loyalist Militia ~ hence the Flags of War order, taking advantage of their 'Make a Flag' range. I hope at Warfare to acquire some Volunteers of Ireland from Dave Thomas's Perry stock, if he manages to restock after Crisis that is! In the meantime I'm painting TAG Italian Wars figures to make three more Command bases for a go at Pike and Shotte. Two figures are finished, two more are ready to start, leaving three for the third base. I hope to get these done by the weekend, but I'm very busy in the real world right now...
Posted by David at 03:52