If I tell you something almost scandalous can you keep it to yourself? I've a confession I ought to make: the RUBs under my painting desk here in GHQ now harbour something beyond my modest Lead Pimple! I'm now the slightly concerned owner of a Plastic Pimple too! That's the thing about we wargamers though, isn't it? We just seem to acquire hobby stuff without really trying? I'd just completed the CWGH poRussian infantry the other day and knew with certainty that the project would be finished when the Lynx and Hinds were done! Silly boy! The next day I found myself mooching on eBay, fatal isn't it? Without much effort it seems I've acquired more Battlefront kits in the shape of an SA-9 Gaskin AA vehicle and two SU-17 Fighter-Bombers to give the Soviets more firepower. But I didn't stop there...I was browsing the net the following day and discovered Butler's 3D Prints. Lots of Cold War kit in 15mm. So, more plastic, or is it resin, for the new pimple in the form of a towed Rapier ground to air missile system, seen here in its arrival state complete with printing struts to remove. Oh joy, a different sort of cleaning up in preparation! 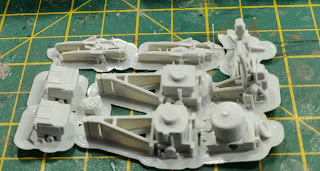 So, two more vehicles for the Rapier Battery, together with a second long base Land Rover, a Land Rover Ambulance and a Radio truck for the B.A.O.R. HQ ~

Not forgetting the Soviets either, a Ural truck and all terrain vehicle for the Soviet SPETNATZ patrol ~

I'd wager now that Phil is really excited to see all this new kit to be airbrushed! So, to give an idea of the Rapier in its deployed firing mode, as it may be a while before it can be finished ~ 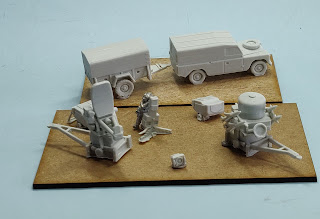 Here is the kit wrestled free from all its support struts, and with only two tiny errors on my part, as I expect it to appear on its firing base.  The Land Rover and trailer in the background complete the in transit side of the set. The crew are two spare metal B.A.O.R. infantrymen left over from the Battlefront figure set. Lord only knows when they will get painted. Phil, it's over to you I'm afraid...