While in the Thirteen Colonies...

...men are selected for the new fangled Light Companies ~ 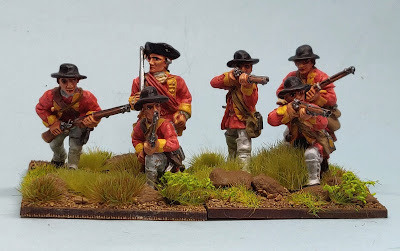 In the shape of these Redoubt Enterprises British Light Company in bowler hats. I've. Made use of a spare figure from the Line Infantry Command Advancing pack as one figure had arrived with incompletely cast separate musket and hands. {Despite two emails asking for a replacement and an in-person request at Partizan nothing has arrived. In my book that's more than poor customer service!} 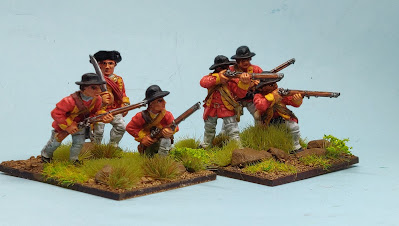 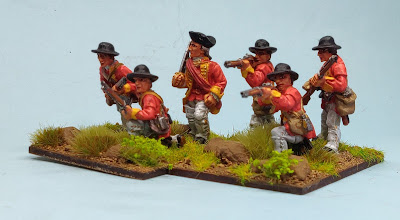 For the frontier look I wanted when I rebased the F&IW collection I've been adding more than my usual tuft or two to these bases of Light Company figures, as indeed for the Grenadiers also, in the form of larger clumps and weeds, though carefully avoiding the 'cottage garden in bloom' look. The MDF bases are from Warbases of course whilst the rocks and base texture are by Woodlands Scenics, via Arcane in Nottingham.
Next to teach the head of the painting queue are the French Compagnies Franches de la Marine, using figures from Redoubt Enterprises once more. They are having to be patient though, as I'm off for some much needed R&R in Cornwall next week. Don't despair though, no chance of blog withdrawal symptoms for you dear reader, two further entries in the can for later!