...otherwise known as the 'Gardes Lafayette'. 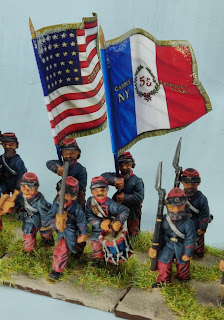 The 55th saw action at Williamsburg, Seven Pines, the Seven Days Battles, Malvern Hill and Fredericksburg before disbandment and amalgamation of the survivors with the 12th New York Infantry.

Their unusual uniforms, typical of many early war volunteer units in many ways, made them a suitable addition for my ACW collection to more readily represent the earlier stages of the conflict. In this they join the Garibaldi Guards and the 14th N.Y.S.M. or Brooklyn Chasseurs in that aspect of the project. 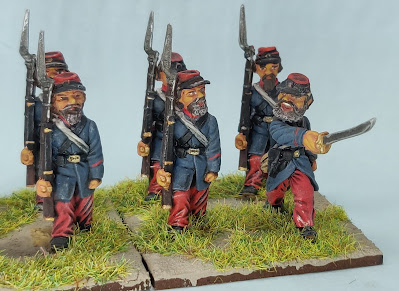 The figures , as you might guess, are from my preferred choice in Dixon Miniatures of course and the flags from Flags of War, with bases from Warbases as ever.