I wanted to paint a test figure for the small unit of Republican Roman Cavalry in my start-up force and so I chose to paint one of the three mounted officers I’d added to the starter set offer. He will lead my cavalry force as it expands beyond the one unit of three bases, or nine figures if you prefer. Initial observations when assembling all the Mounted figures were that the horses were correctly on the small side. The figures themselves fit on the horses well, which is not always the case with some manufacturers I’ve found! While I quite like the inclusion of separate heads I’m less keen on the two part bodies, but fortunately this figure was a one part body. My painting technique now is a simpler process, usually base coat and highlight from the Foundry paint triads. However, as there’s a good deal of exposed flesh on the arms and legs of these figures I opted for the same method I’d used on my Late Roman armies. The flesh is blocked in using the Foundry Flesh midtone and then, when it’s thoroughly dry, I wash the flesh with a 50:50 wash of water and the old Games Workshop Flesh Wash. {There’s a bit of a backstory to this, as I bought three jars in a hobby shop located in the small South Australian town of Moonta. Subsequently I carried these round half of Australia and home via Singapore. So they are well travelled!} Anyway, no more waffle, see what you think of the end product ~ 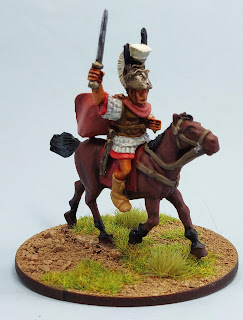 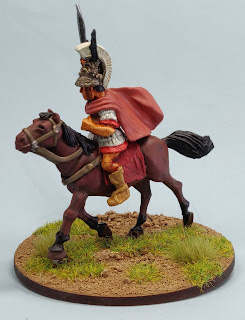 I’ve started now on the Legion figures, two Princepes first. The shield transfers haven’t arrived yet, so I’ll wait until I’ve finished a whole base now before showing any more of this project, probably towards the end of next week I’d imagine.
Posted by David at 01:43