I really do dislike having to buy figures nowadays in blisters from many manufacturers, much preferring to choose individual figure combinations to suit how I want a unit or group to look. When the most recent phase of my War of 1812-15 expansion project had finished I had quite a few figures from the Foundry range left over. Some of these I utilised in making more skirmisher base markers and a few I used in additional Command bases, but that still left five figures to use up. My solution was to marry them up with a spare horse from another collection, albeit from a later period, to produce a vignette base. Anyway, see what you think ~ 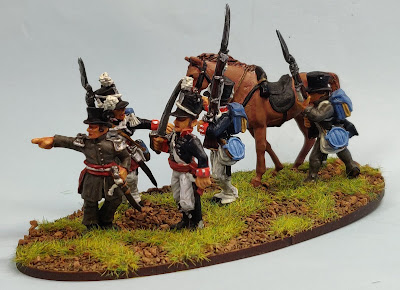 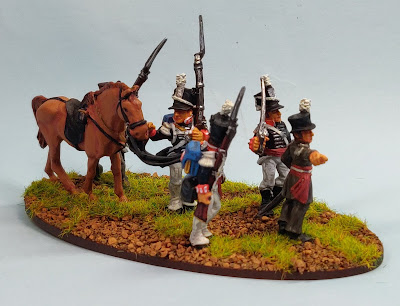 Apart from the two remaining units of US Infantry in the tombstone shako I still have some American and Anglo-Canadian command figures left over. I'll keep them for now as the US figures give me the option for a further Militia unit, while the Anglo-Canadian figures will let me create an alternate command base for my de Watteville regiment converting them to British infantry. But that lies somewhere in the future for now. Older folk like me may soon have more painting time than we want I expect...
Posted by David at 03:38