After two months of mainly painting figures for my War of 1812-15 collection I've taken a break and returned to my main gaming interest, the ACW, in the form of a Dixon Miniatures Confederate unit. These will represent the 10th Tennessee in their distinctive red trimmed uniform. The flags they carry are from Flags of War and the bases are from Warbases. My ACW collection has its bases covered in 'Dried Earth' Basetex before static grass and a few clumps are applied. I really do enjoy painting these Dixons' figures, even though some are like old friends I've painted so many before. It's the character in the faces and the movement in the figures I enjoy, plus the careful attention to detail in acoutrements and arms. For my money they are simply the best figures for the period, but I recognise that others are less keen: it's a bit chalk and cheese really...
Anyway, here they are in all their glory! 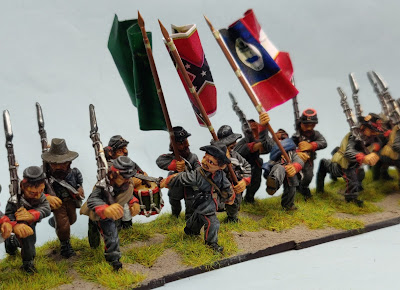 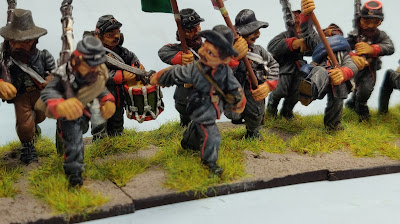 I've another Dixon Confederate unit still awaiting painting, as the 3rd Louisiana Infantry. I hope to get them done this month along with a small vignette I've put together from more surplus Foundry War of 1812 figures. In addition I bought a pack of Perry Miniatures ACW Union Generals at Hammerhead because, well, there is no such thing as too many Command stands! I also got a Giants in Miniature from WI, Sir Sydney Smith, who will command my naval landing party and marines in War of 1812-15 games, when he's finished of course.
Posted by David at 02:53