...but nevertheless Phil and I have been working on a plan for our games in GHQ this year. It's a two pronged plan we have arrived at after much deliberation. In the first part of the year we plan a series of battles set in North America from the AWI via the War of 1812-15 to the ACW, all linked by being fought over substantially the same terrain layout. We shall use Black Powder as the rules driver, including scenario based specifics for the armies deployed and our usual in-house rules here in GHQ,  in the handling of routs for example.
In the second half of the year we are hoping to play out an ACW campaign inspired partly by following one on the web and partly by revisiting Sam Mustafa's ideas on campaigns in his Longstreet rules. As we will be using Black Powder for the games then a certain amount of 'development' is called for based on his use of Character,Campaign and Terrain cards in the system so we shall see where that takes us. I also hope to incorporate my own Random Event cards which I developed for use in Bull Run to Gettysburg. We shall , once again, have to wait and see where that takes us. In the meantime, here are some pictures from earlier games in all three periods to whet your appetite ~ 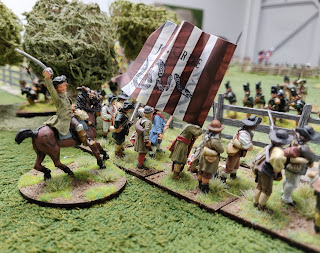 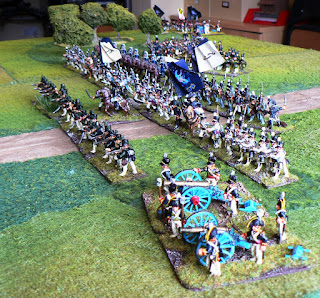 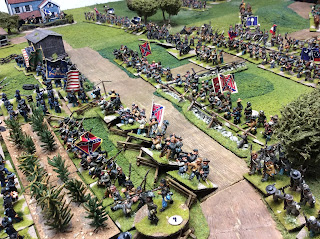 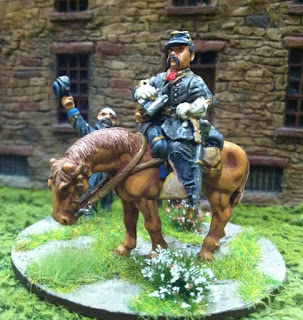 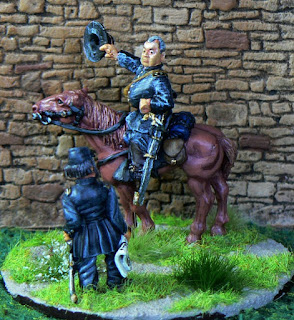 The last two pictures are my 28mm alter egos, the head was sculpted by my son Matt for a Christmas gift one year and cast by Trevor at Dixon Miniatures. A vanity project if ever there was one, but who amongst us doesn’t yearn to be down amongst the little men leading them to glory? The horses by the way are by Dixon Miniatures and the figures’ bodies are from Redoubt Enterprises. The Reb, ole Jubal E Bykleigh, captures my look in the 1980’s and the Union figure, Useless S Bykleigh, a more contemporary, and sadly stouter, look!