Phil popped over this morning for our usual Monday game, a prearranged first try at Longstreet. As regular followers might have noticed we have both enjoyed games of Maurice, by the same author, so we were both happy to give the ACW rules a go. We have both been reading the rules off and on for a while in preparation for a game and felt ready to give the basic game a good going over today. We settled on a Brigade a side from my ACW collection and set our game in 1862, removing any cards from inappropriate years of the war. Phil took the Rebs and I took the Union ~ our usual choices in ACW games over the years. The table had a sprinkling of terrain features in the form of a few stone walls, some light woods and low hills. Turn 1: Brig Gen Useless S Bykleigh opts to advance in column for the extra movement allowance ~ 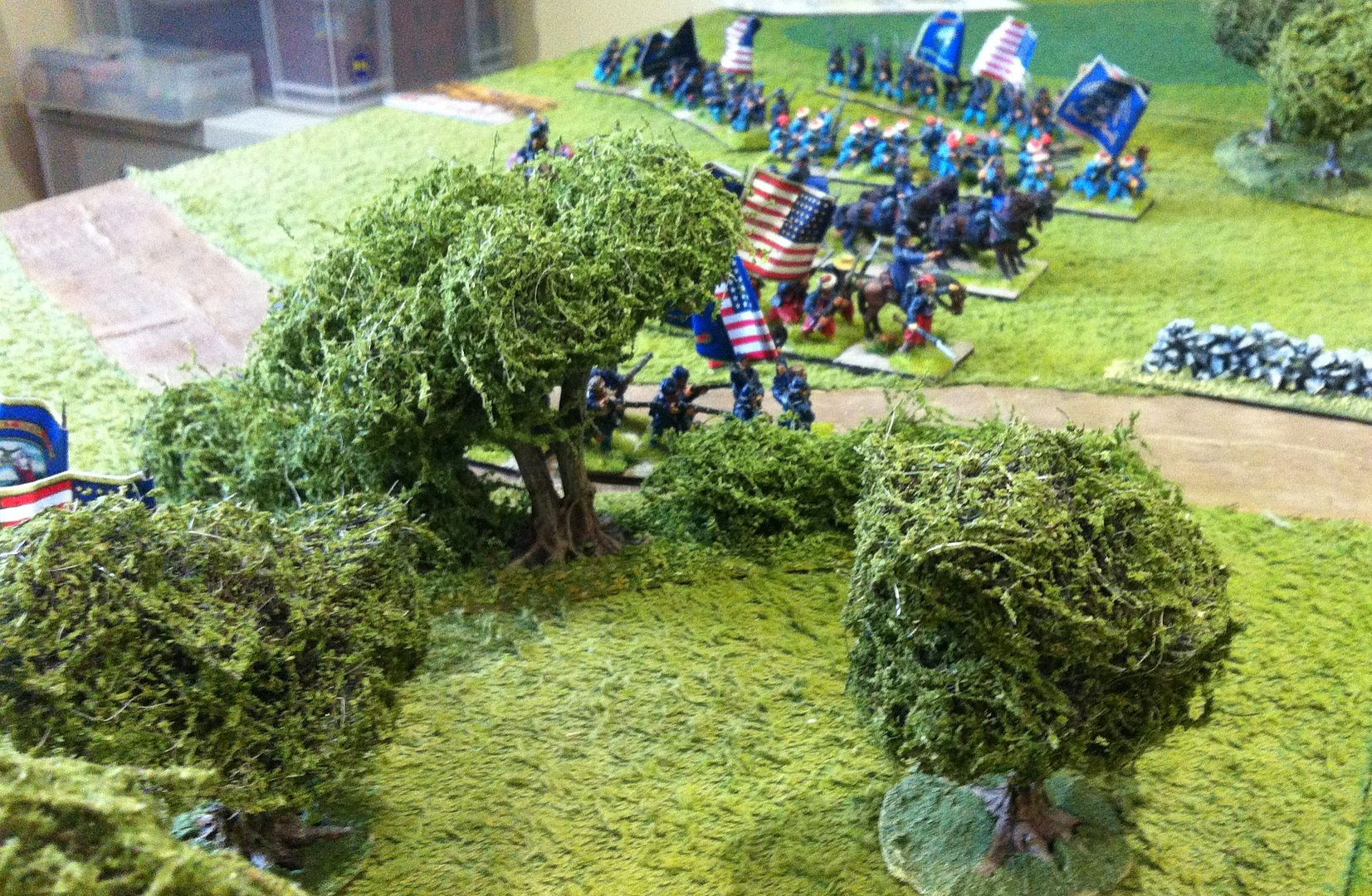 While Jubal E Robinson opts to move forward in line, reaching the walls running alongside the turnpike! An ominous position for the Union and only one turn played through! Having won the dice off for initiative was to prove vital to the Rebs in every turn we found. 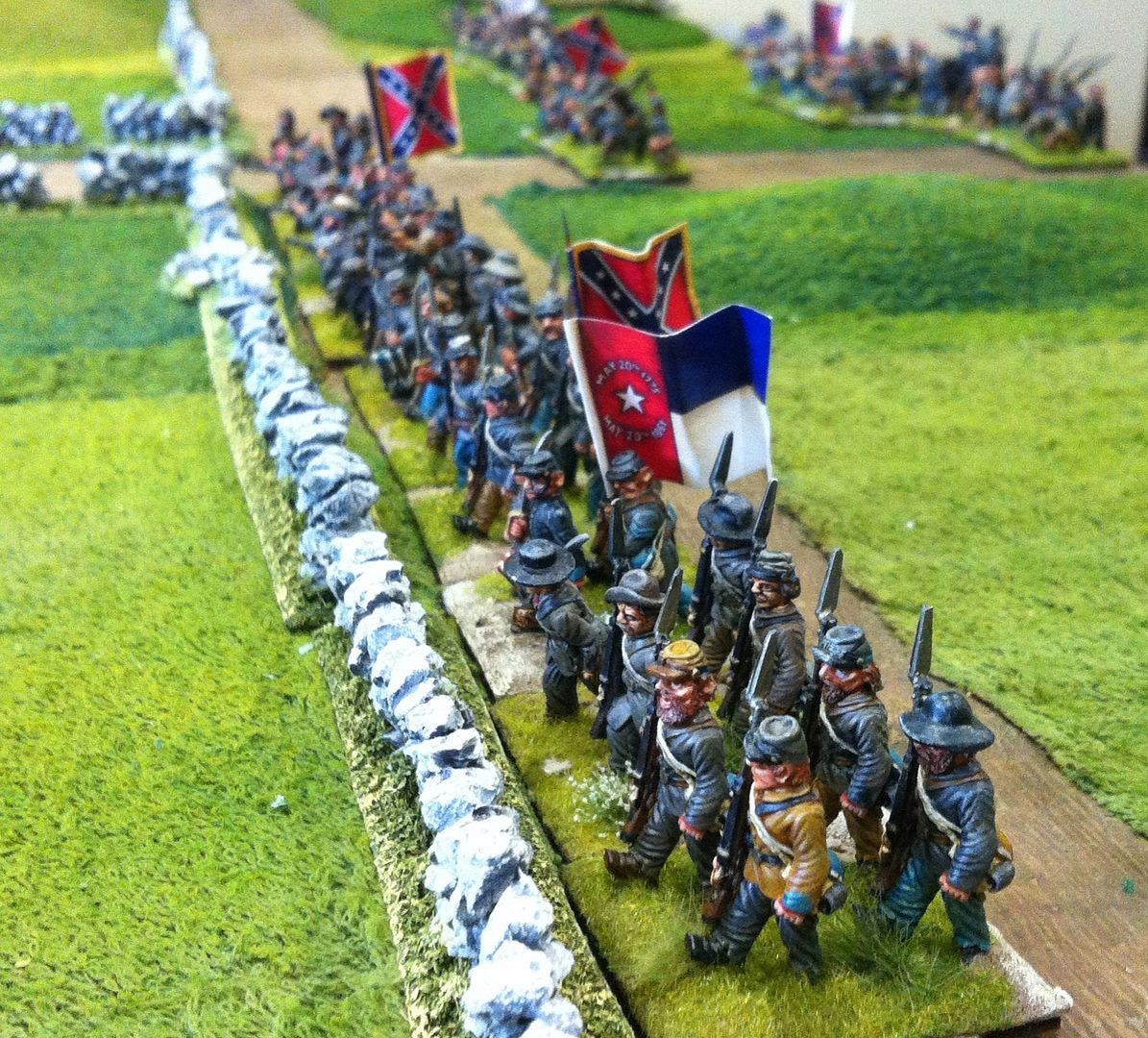 The position going into turns 2 and 3 were very favourable to the Rebs. Being forced to play a number of cards to reduce hits from fire meant I found myself unable to manoeuvre as freely as I hoped through terrain which disrupts troops. Hence, the Union right became somewhat behind the rest of the attack, leaving the Rebs free to concentrate their fire. 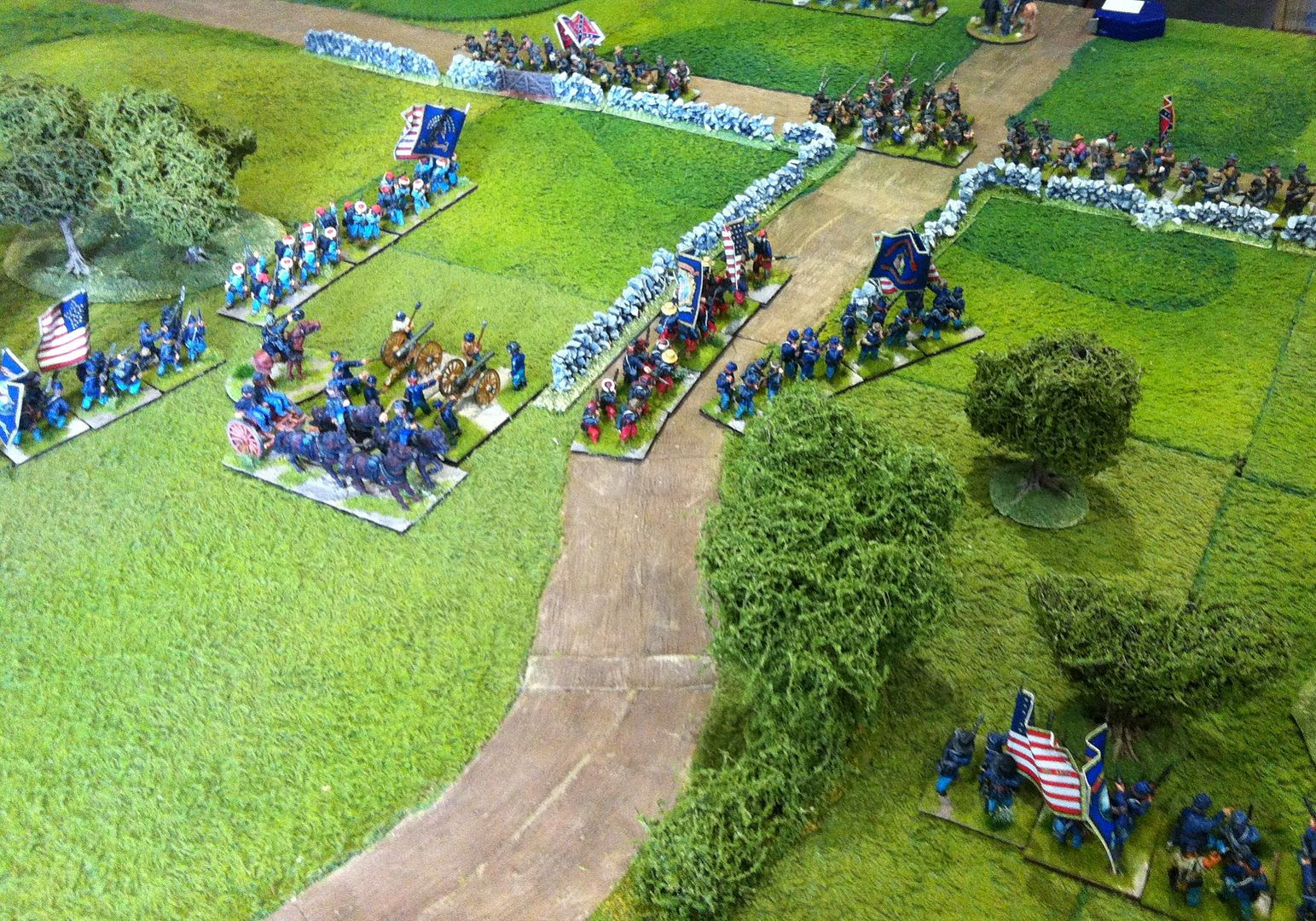 The Union plan had been to drive for the crossroads, the game's objective, while occupying the flanks with diversionary attacks. Problems in deploying and manoeuvring the largely Enthusiastic Recruits making up his Brigade was already proving too much for USB! Casualties began to mount up by Turn 4 and cards seem to slipping through my hands as I tried to stem the losses the boys were suffering! As you can see, the Rebs were holding a strong hand now in the action and pouring it in to my boys! 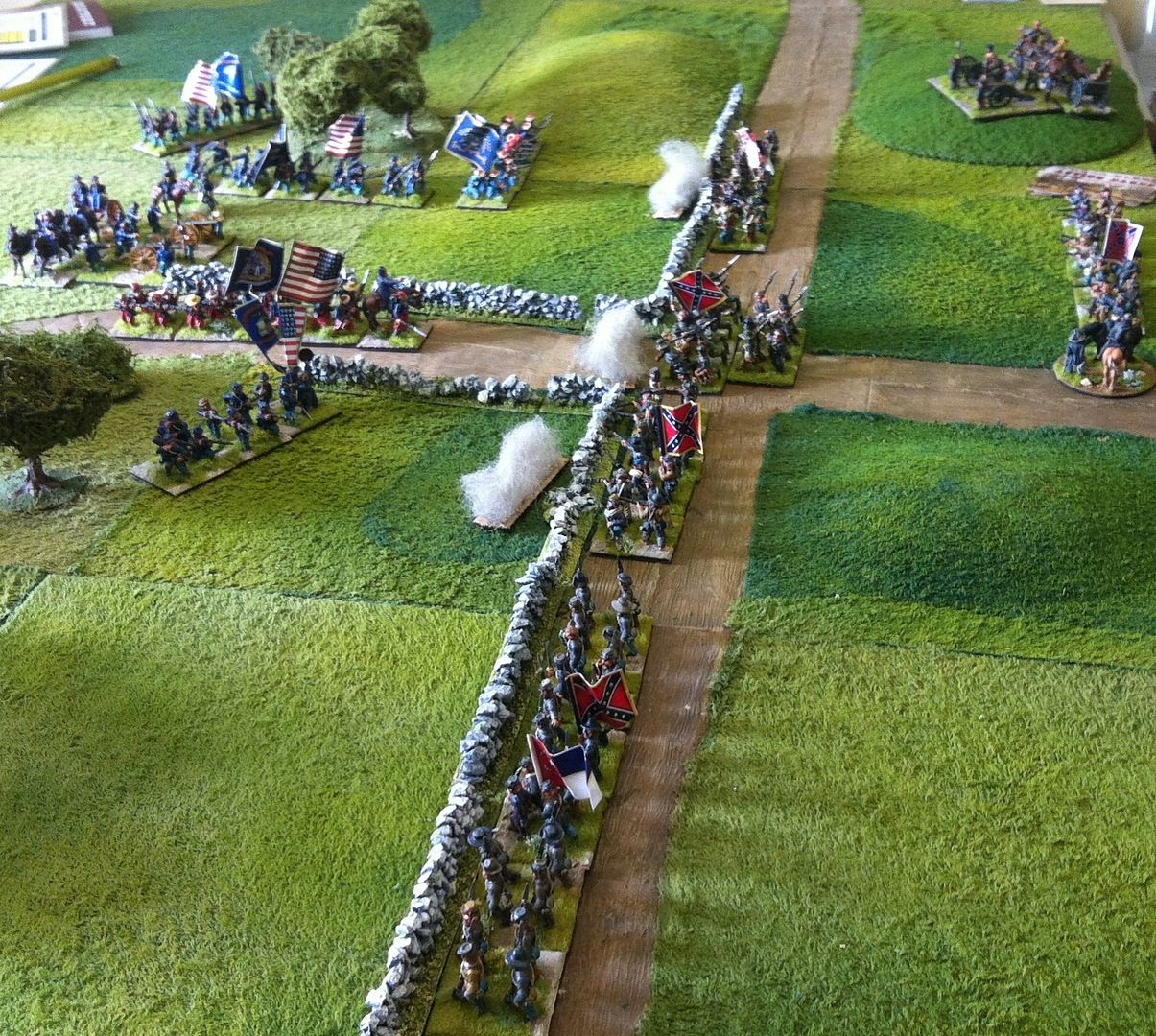 Using cards to mitigate Hits on your units seems like the thing to do when things hot up, but it does limit your choices in the firing/movement/combat phase of the turn. My boys were nearing breaking point and were having little success in dislodging the Rebs from the safety of the stone walls! 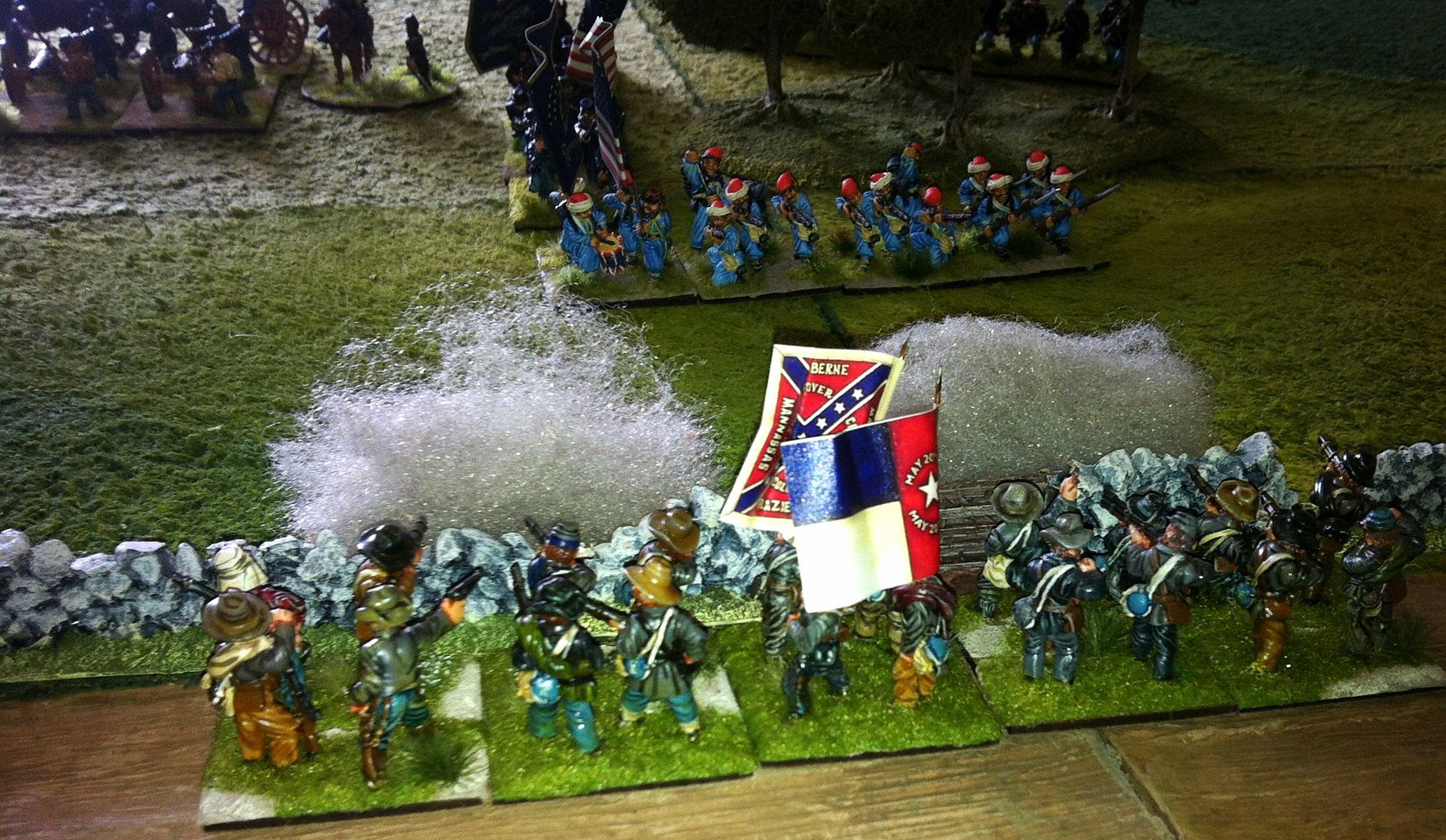 In Turn 6 the Union losses reached  close to their Shatter Point, leaving Jubal only needing 3+ on a roll of a D x 6 to equal the 14 Shatter Points of our forces. He duly scored 4 and won the game! 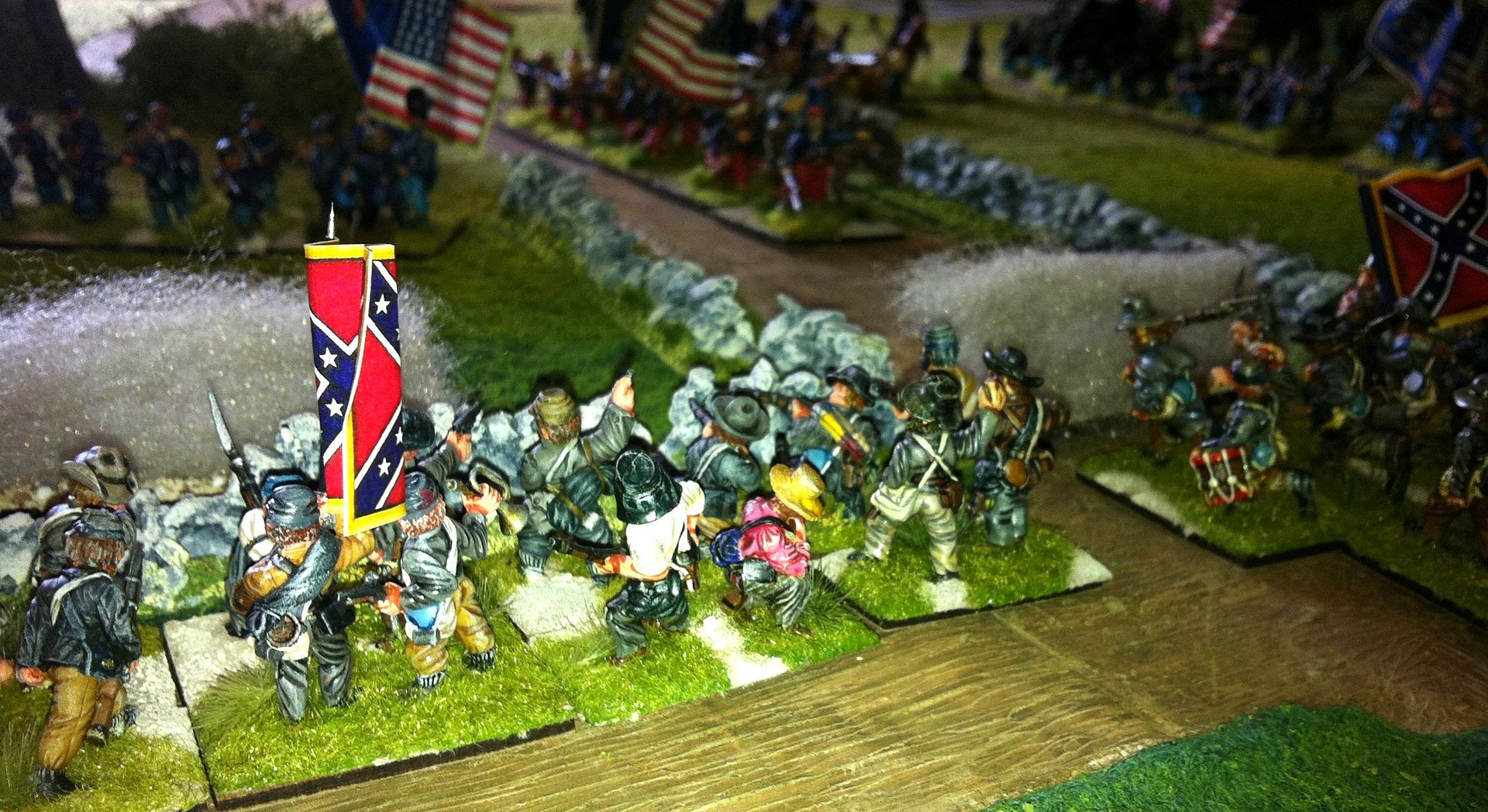 US Bykleigh's boys melted away as Reb cheers echoed loudly in their ears! It was sadly all up for the Union!
Our game lasted two hours, with relatively little time spent on looking up things in the rules. Did we enjoy the game you ask? Well, Phil more than me I suspect. Would we try it again? More difficult we thought. It did not really produce the game we are more used to using Bull Run to Gettysburg or Black Powder for example and seems rather more suited to groups of club players where the focus of the ongoing campaign is on the narrative of your 'personality' figure. The cards never really favoured the Union side and loosing the initiative rather put them on the back foot in each turn, having to use cards to mitigate hits suffered to reduce potential base losses. In truth, I soon realised I would not dislodge the Rebs with my Enthusiastic Recruits and the game rather slipped away from me with that realisation. Jubal handled his boys well, gaining four Epic Points in the end to Useless's two {For turning up, as the rules so baldly state!} Will there be a follow up? Well, we'll see...