The Pah'Doc Patrols makes a rare return to GHQ!

I have a small 20mm Vietnam War collection which I started on impulse many moons ago when attending a small show, I've forgotten which one, near Manchester. They had a Bring and Buy, with all sorts of stuff laid out in any old order I recall. Amongst this was a large plastic bag full of unopened SHQ Vietnam War infantry packs and a small A5 rule set, 'Bodycount' I think. It was priced at £5.00 so I snapped it up, as many gamers would I think, and only when I got home did I wonder why! Beyond TV coverage as I was growing into adulthood I knew next to nothing about the war, after all our Government carefully avoided any involvement. The packs stayed in the cupboard a long time I remember that! But, eventually, I decided to take the plunge and paint the little chaps up. Of course, being a wargamer I then decided I needed a few more figures; and some buildings; and a few civilians and livestock; and some vehicles; and finally a helicopter or six! I needed some rules, having rejected three different sets for various reasons, and I lighted on a free card driven set on the net somewhere, I've long since forgotten where before anyone asks. We used those for our occasional games for a number of years before interest waned and they collection was boxed up and put away. Enter Bolt Action rules, followed by an interesting set of suggested amendments in an issue of Wargames, Soldiers and Strategy. Jon and I decided to give it a whirl in our latest game here in GHQ recently and what follows is a photo montage of the game. A 12 turn cliff hanger as it turned out!
The first picture shows the table in the opening turn. Lt Weissmann has to safely escort his convoy from an up country base, exiting the table either at the top or bottom road point as you look into the picture. Each vehicle carries a squad of 5 men and a driver while the jeep carries the HQ and Medics. The VC under the command of the veteran Ho Bic Li are represented at this stage by the yellow encounter markers - 5 blanks, 5 Infantry Squads, two of ten with heavy weapon support and three of five with an RPG and a LMG team, and 5 Booby Traps. They are placed randomly so the VC player does not know where each type is exactly ~ 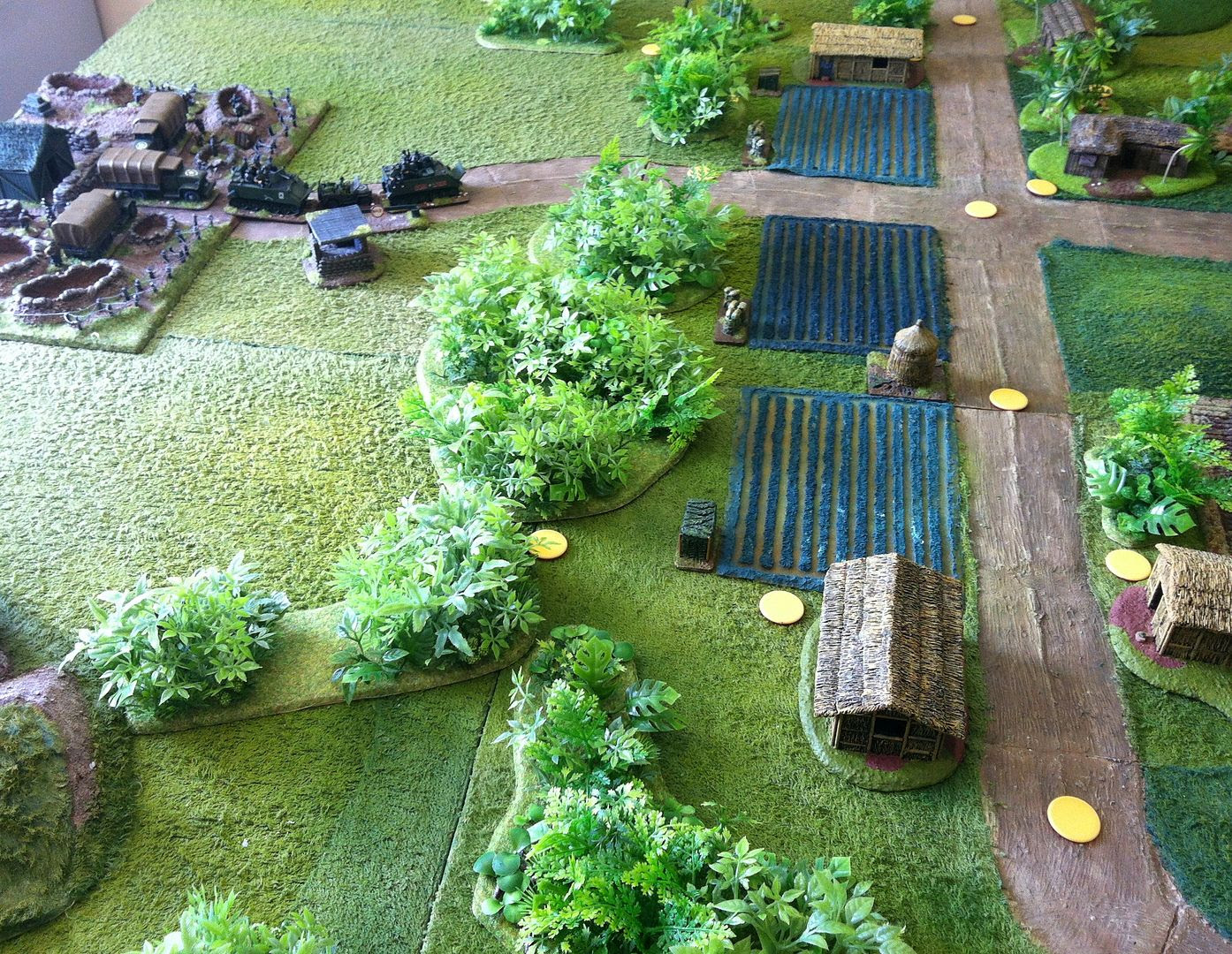 Lt Weissmann organised his convoy in the first two turns, not straightforward as he has one fewer dice in the bag than he has units. The VC or the Booby traps will be activated when a vehicle of squad passes their location. Only the M113s and the jeep can operate off road, where they may only move at 'walk' speed. Lorries may only stay on the roadway but can move there at 'Run' speed if they wish. The road will only take single file traffic, so a destroyed vehicle blocks the road! 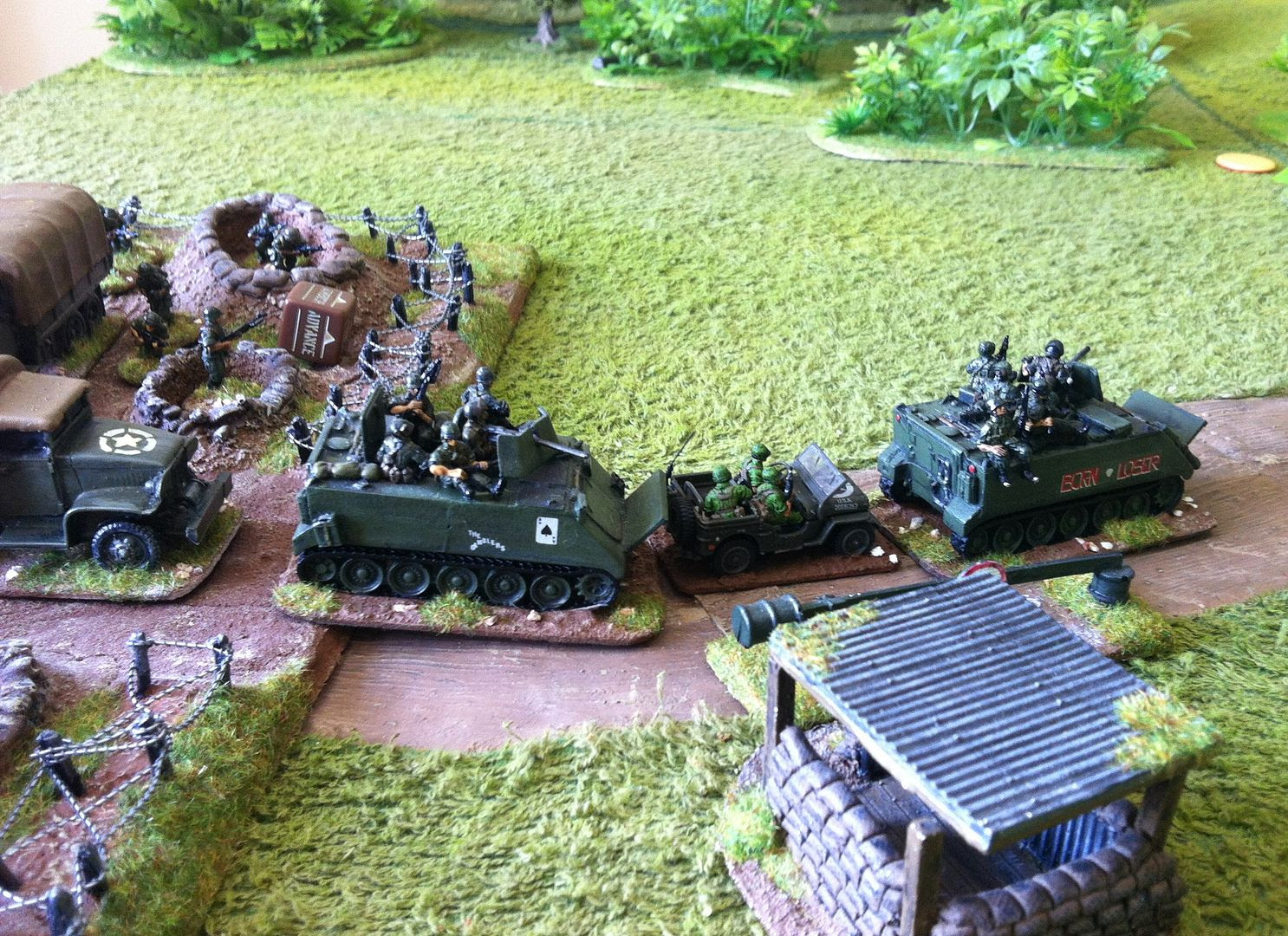 With one of the M113s taking the point, the Free World Forces encounter their first enemy. It turns out to be a booby trap. Counting as Regulars, the crew must pass a Morale Check or the trap explodes. It would automatically wreck any soft skin vehicle and the driver and squad on board would dice as if they were casualties. The M113s would need to be penetrated at 8+, with a basic 4 for the trap. I needed n't have bothered, Lt Weissman's men sailed through the test and the trap proved to be a dud! Moving forward a turn or two another encounter proved to be a second Booby Trap; one which was a dud too just like the first! However, a squad of VC were also activated, position at 2 x D6 inches from the marker in a random direction. The VC were in RPG range and opened fire on the convoy with all they had. Result? A paltry Pin Marker! While they in turn were pinned by the M113's HMG. 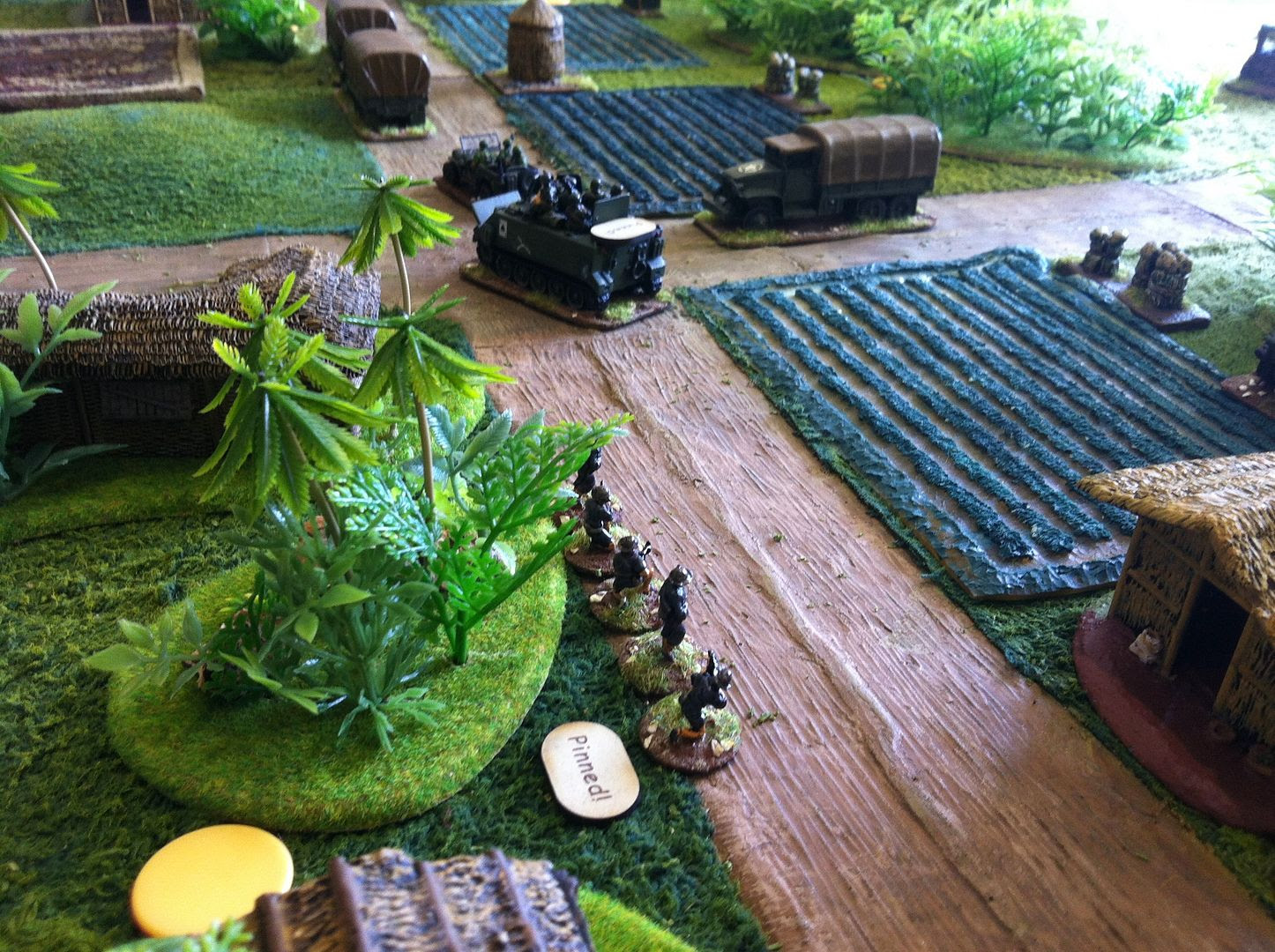 The second M113 engaged the VC squad before the RPG could do any damage. Firing across the rice paddy they saw the enemy take casualties - and another Pin Marker! 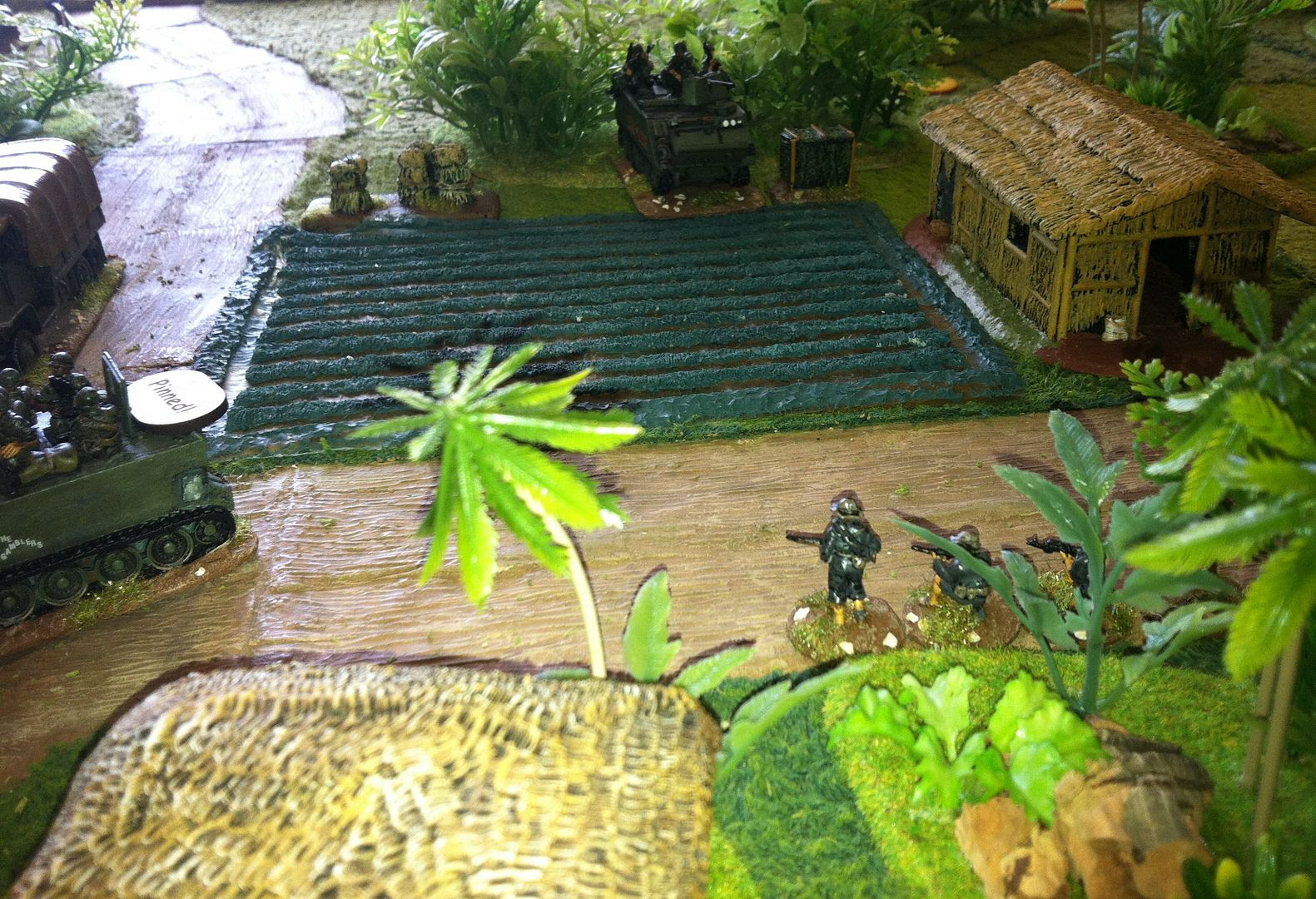 Blazing away at the enemy, 'Born Loser' advances into the rice paddy: a risky business as every turn could see it bogged down for D x 6 turns on a throw of a 6! Again, Lt Weissmann's men pressed forward regardless! Taking advantage of the confusion caused by the fire fight, the lorries in the convoy make towards their exit point. They activate a third Booby Trap which proves to be a further dud! Re-education for some poor soul I would think! They also activate a second 5 man VC squad, again of RPG*, LMG*  and three riflemen { *Only one man teams in this game}. The RPG fires and again the VC fail to register a hit! 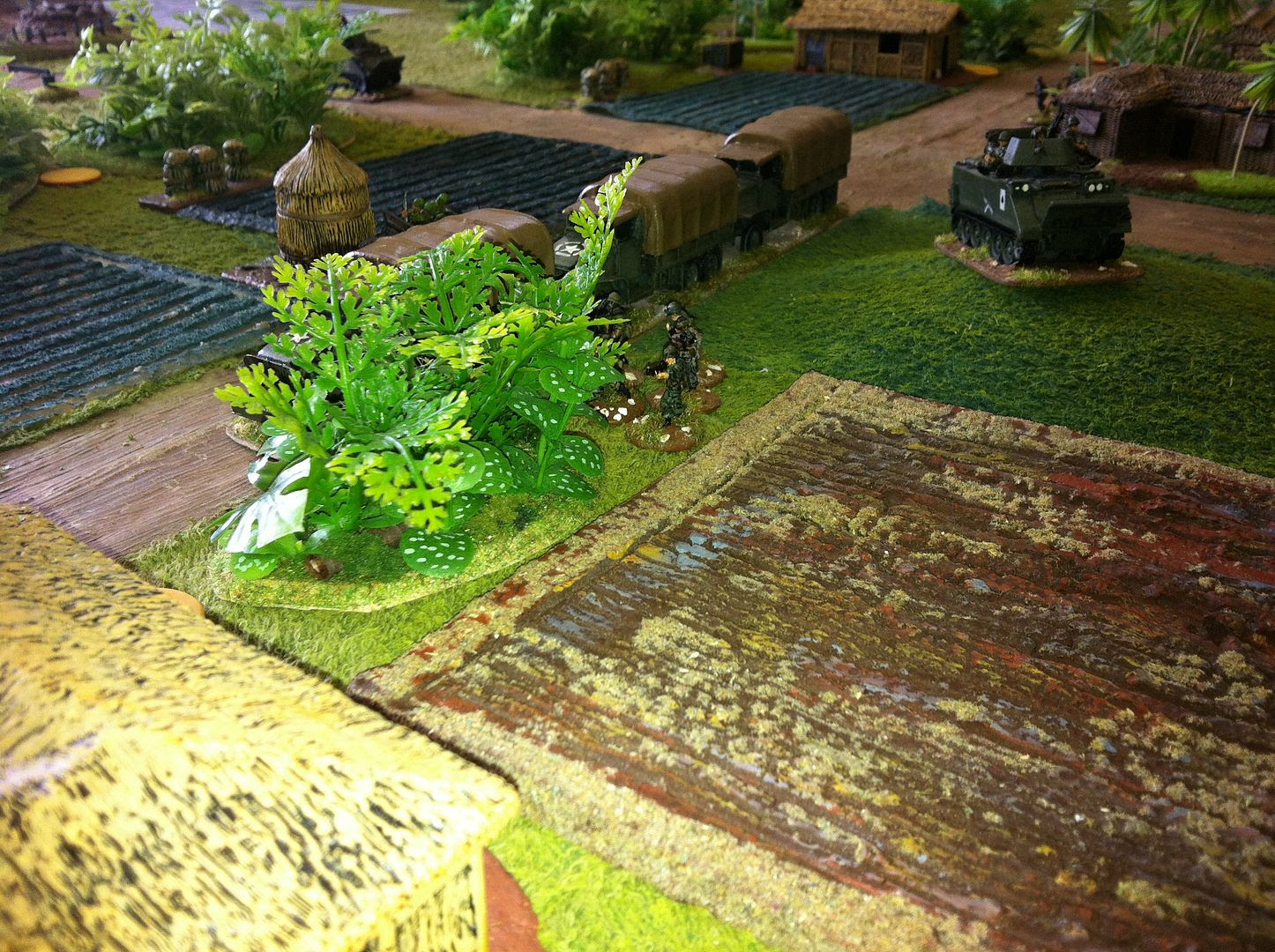 Held up by a VC assault, some US troops debus and flank the enemy. 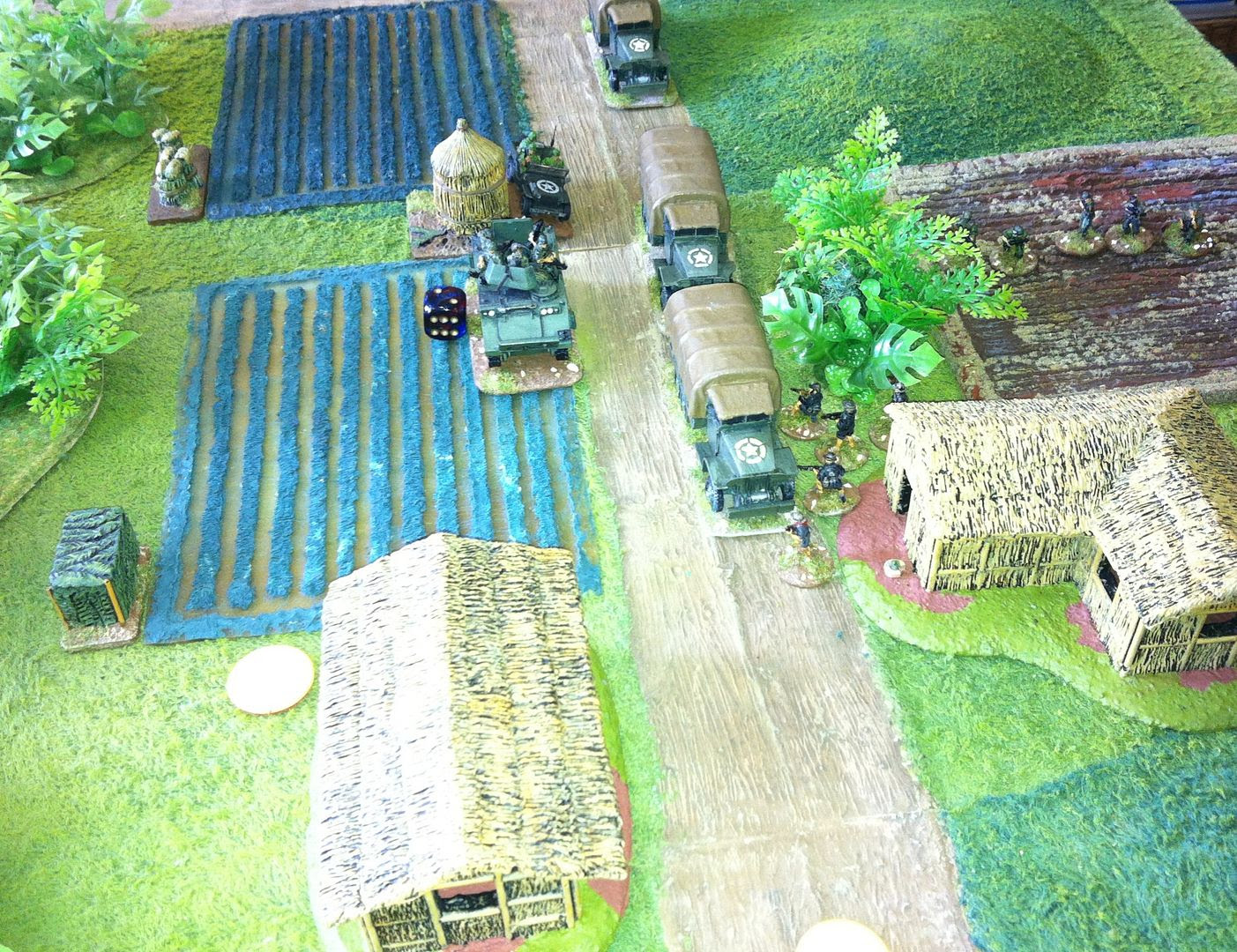 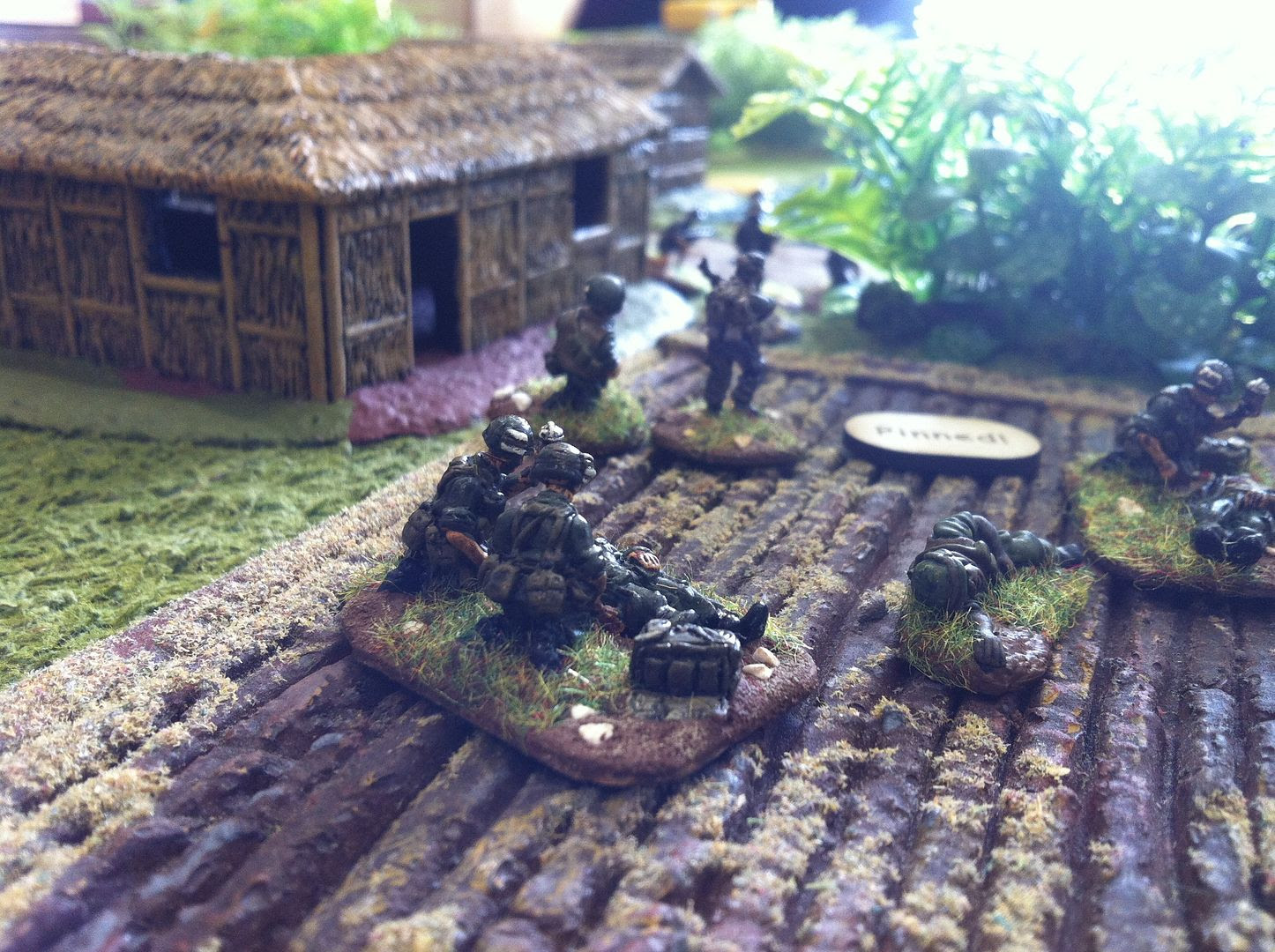 No one is left behind of course, so the stretcher bearers from the HQ rush into action even though under heavy fire!

Finally one of the larger and more heavily equipped VC squads is activated. The column faces a real threat now, as a knocked out lorry will block the exit! 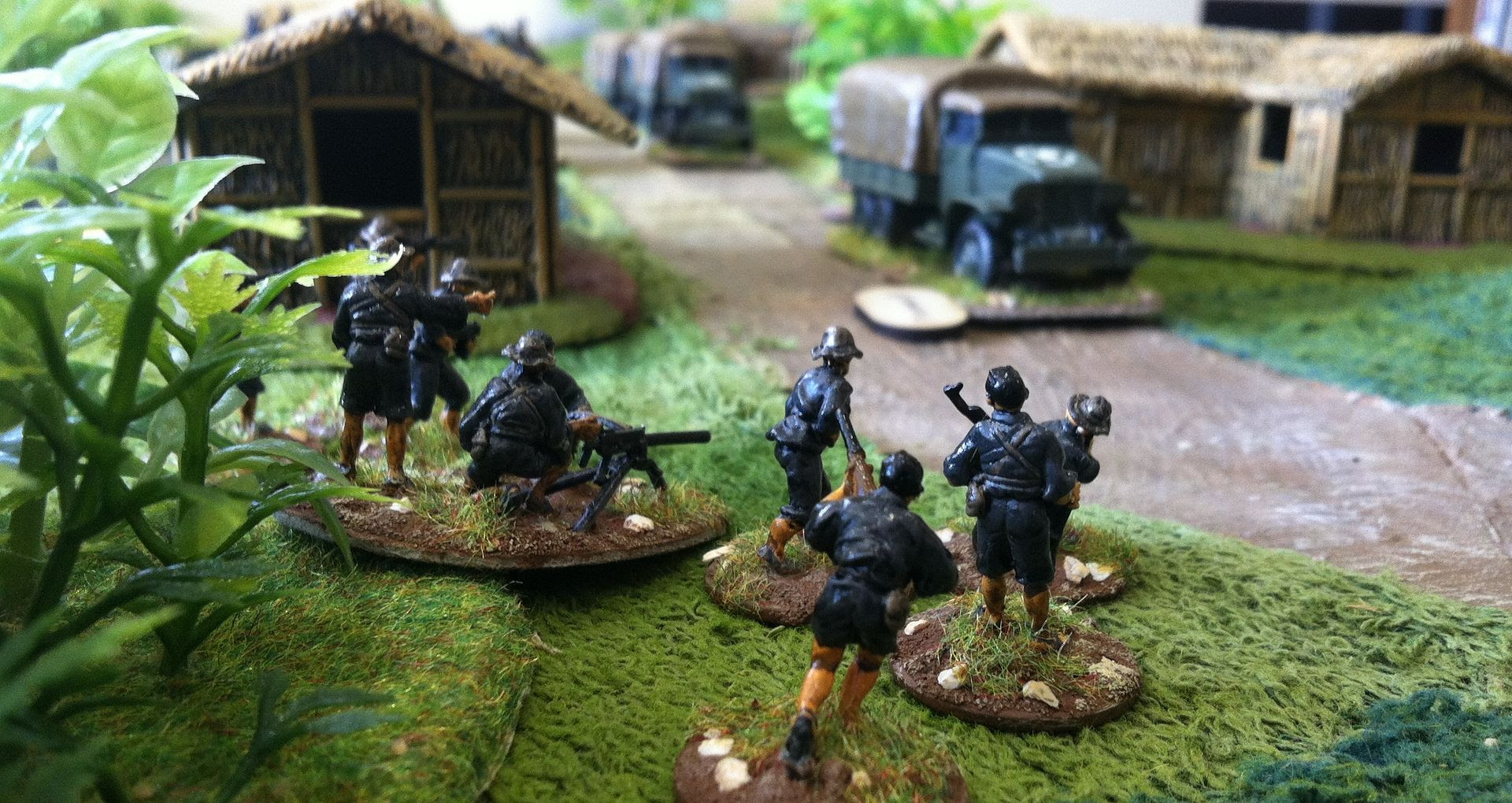 Sure enough, the VC dice at last behave themselves and a lorry is destroyed, blocking that exit. However, Lt Weissmann has succeeded in establishing radio contact and called in a helicopter gunship strike! The VC find themselves under heavy fire {12 D x6} in the next turn! Only one casualty, but another Pin Marker results and, with fire from the M113 and the remaining US infantry the squad accumulates markers for fun and finds itself pinned down, failing an order test in three successive Turns.

By then Lt Weissmann has decided it is too dangerous to try the alternate road exit, knowing there are two squads of VC and two Booby Traps still to be activated. He abandons the two lorries and with the jeep, the two M113s and the remaining infantry foot slogging their way off the table we called a halt in turn 12. Bolt Action together with the suggested WSS amendments and a house rule or three gave us a really good game. Then it was Chow Time here in GHQ!
Posted by David at 11:25